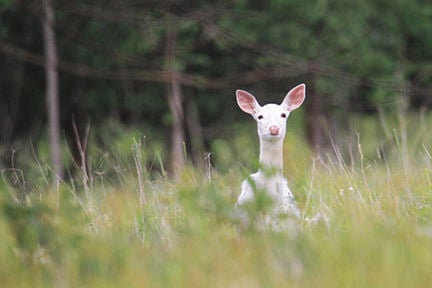 A white whitetail at Deer Haven Park strikes a pose recently — beyond the fence. 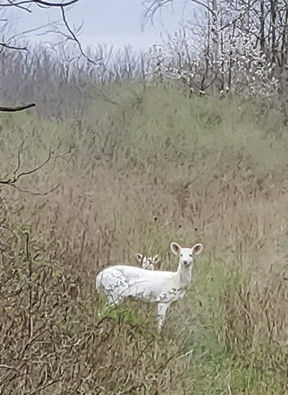 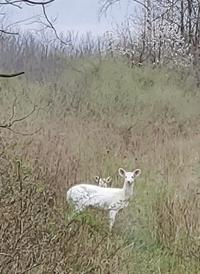 A white whitetail at Deer Haven Park strikes a pose recently — beyond the fence.

Spring is such an amazing time to tour at Deer Haven Park because so much activity abounds. Nature is awakening, daffodils are blooming, trees are budding, and the wildlife are actively exploring.

Volunteers and staff alike will agree that every passing week brings a new and ever-changing environment beyond the fence. Oftentimes it is only a matter of a couple of days, especially at this time of year, in which open areas will display large windows of vision across multiple acres of landscape only to soon curtain with leaf-filled foliage and rebirthed underbrush.

Visitors have been enjoying the auto tours available each Saturday now that the 2021 tourist season has begun, and indisputably, one of the most frequently asked questions at the Visitor Center has got to be, “When is the best time to see the deer?”

The person asking and the one being asked do not need specification, as both share the unspoken realization that it is not just deer in general being sought, but most especially the white whitetail.

A valid question, as Deer Haven Park is a wildlife refuge, not a zoo, and doesn’t contain domesticated animals. Covering 3,000 acres, the park is home to many mammals, birds, waterfowl, and amphibians alike, all of which are going about their normal daily activities. At any given time throughout any given day, tourists may see some, or many of these wildlife creatures, as their visit is just that: a visit, or social call, by a guest in the homelands of the wildlife who reside here.

One such visitor, Linda McAndrews came with a guest recently and shared that she was on her third tour through the park. Her first two were during the 2020 season, and she had not gotten to see any white whitetail. Determined, she arrived early this season to see if three times is really a charm. Her determination paid off.

Upon her return to the Visitor Center, camera in hand, she shared multiple photos of white and brown whitetail. Exuberant, she also shared having seen Canadian geese, a blue heron, turkey vultures and wild turkey. Touring the park is an activity she thoroughly enjoys, and she promised she would be returning for yet another venture beyond the fence.

What makes a tour of the former Seneca Army Depot lands even more fascinating is the 80 years of military history one is made privy to, dating back to the Depot’s inception in 1941. While enjoying a relaxing drive through the park, so much history abounds for visitors of any age to partake.

Another new visitor who was not from the area was sharing how fascinating the military history was and how captivating and thought provoking it was to step back in time and see the munitions igloos and military buildings. When asked if he had seen any white whitetail, he responded with a delightful no.

His demeanor was not one of disappointment, so when the issue was further discussed, his perception was one that gave pause. He said, “It’s okay that I didn’t see any white whitetail today because seeing them becomes even more special and privileged than it was prior to my arrival. If you don’t see them every time you visit, you will be less apt to take them for granted. Don’t you agree? If you take them for granted, they will no longer be special, and special they are — and should continue to be.”

Yes. Special they are — and should continue to be. Don’t you agree?