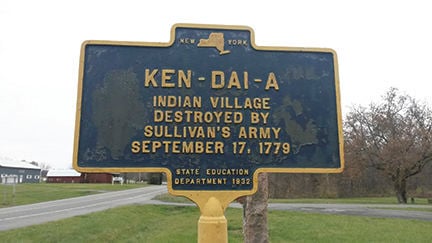 This placard marks the spot of the former Indian village of Kendaia in Seneca County. 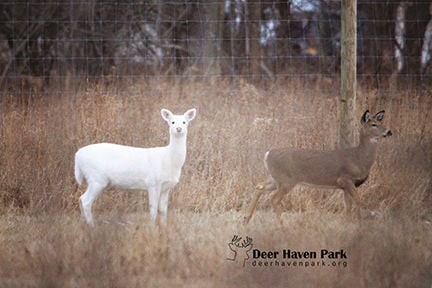 The wildlife at Deer Haven Park roam on land that used to be the Indian village of Kendaia.

This placard marks the spot of the former Indian village of Kendaia in Seneca County.

The wildlife at Deer Haven Park roam on land that used to be the Indian village of Kendaia.

The free-roaming wildlife that grace the natural habitat of Deer Haven Park’s 3,000 acres exist in the moment, naively unaware of the history held within the lands upon which they dwell.

As Earth’s axis tilts, hosting autumn’s shortened daylight and cooler nights, the lands beyond the fence comprising the former Seneca Army Depot reverberate not only with radiant color, but also with a centuries old saga consisting of a village fondly known as Appletown — aka: Kendaia.

A name many believe came into existence due to the same birth name of a Seneca Indian Chief, Kendaia originated where Romulus, Sampson State Park, and Deer Haven Park with its surrounding former Depot acreage now reside. The area was originally occupied by the Seneca and Cayuga nations of Iroquois where it is said prominent war chief Tah-won-ne-ahs was born sometime between 1737 and 1760.

The Iroquois Nation’s Kendaia inhabitants shared roughly two dozen longhouses and endless acres. At that time, crops of corn and orchards of apple trees claimed the countryside until the “scorched earth campaign” came to pass. Commanded by Gen. George Washington, in response to the Iroquois Nation support of the British during the American Revolution, the forces of Maj. Gen. John Sullivan and Brigadier Gen. James Clinton, along with an estimated army of roughly 3,500 soldiers on foot and horseback, arrived in Kendaia on Sept. 5, 1779 with orders to destroy any semblance of Iroquois existence. Privy to the military’s mission, Kendaia’s Iroquois fled prior to Sullivan’s arrival; however, longhouses, crops and fruit trees were torched, an abided by order that left behind only smoldering ruins and smoke-filled skies.

As the Revolutionary War ended in 1783, the area known as Kendaia became part of approximately 2 million acres designated as the Central New York Military Tract. The area was set aside specifically for NYS soldiers as compensation for their participation in the war. As 1789 unfolded, the first non-native settlers made Kendaia their home, and in 1791 lots were drawn for up to 600-acre land assignments. Lands granted were commissioned to be settled by 1799, but few vets made use of this opportunity.

One veteran chronicled to accept this offer was Private Henry McLafferty from the Third New Jersey Regiment who served with Gen. Sullivan during the raid at Kendaia. McLafferty and his family secured their allotted land in the mid-1790s, settled, and later purchased additional property. Active in the First Baptist Church founded there in 1795, McLafferty eventually became an ordained minister.

As the century turned, Kendaia’s population grew. One notable land purchase was made in 1823 by Gerard VanVleet. Generations later, while plowing his family’s land, Clarence VanVleet, great-grandson of Gerard, reportedly found numerous Indian artifacts dating back to the early 1700s. The VanVleet farmstead, among numerous other large acreage homesteads of the day, enjoyed an active Kendaia village replete with blacksmith, general stores, school, churches, and a rural post office established in 1862, run by one Amos Crane.

The land revived, regained its birthright, and yielded vast quantities of apples, pears, cherries, peaches and grapes via the nurturing hands of its new owners, who also planted numerous acres of vegetables and grains.

Thus, the lands of Kendaia garnered a reprieve from the wartime hand of man for what may have seemed like ages to some, perhaps not long enough to others, until such a time that fate destined to reclaim once again what it perceived to be within its right to do so. Lands. Homesteads. Lives. Nature. Wildlife. An ongoing history held within the acreage upon which the wildlife of Deer Haven Park now dwell, unbeknown that they themselves are still making history.

Dee Calvasina is a freelance writer and monthly columnist who supports the conservation of nature and all wildlife at Deer Haven Park, LLC. To show your support of these ongoing efforts, book your tour. Visit deerhavenpark.org, like them on FB, or call 8-DEER-TOURS (833-378-6877).

LEGAL NOTICE NOTICE IS HEREBY GIVEN