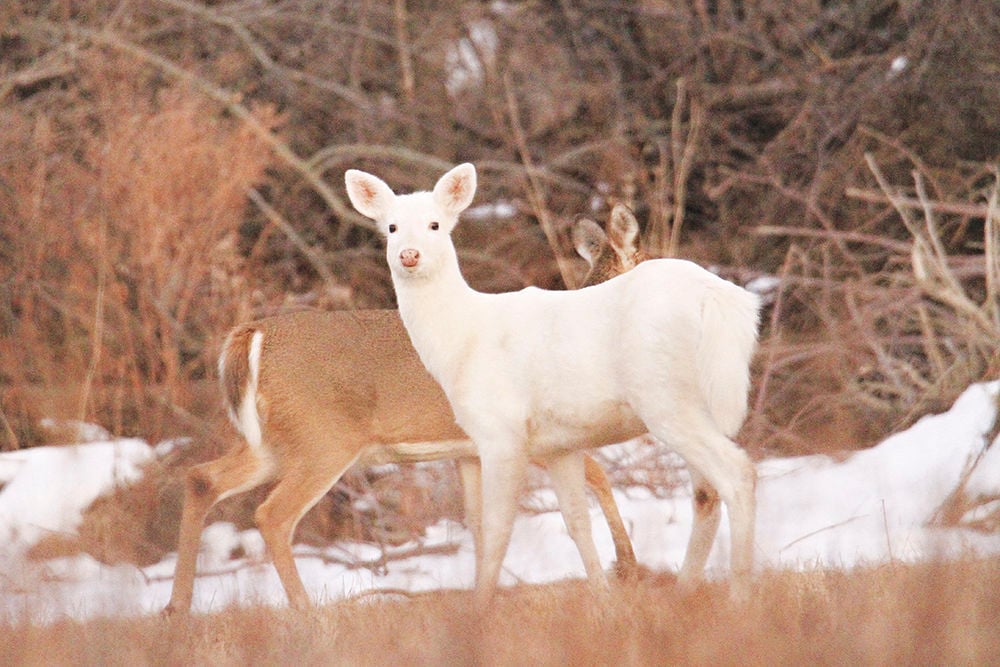 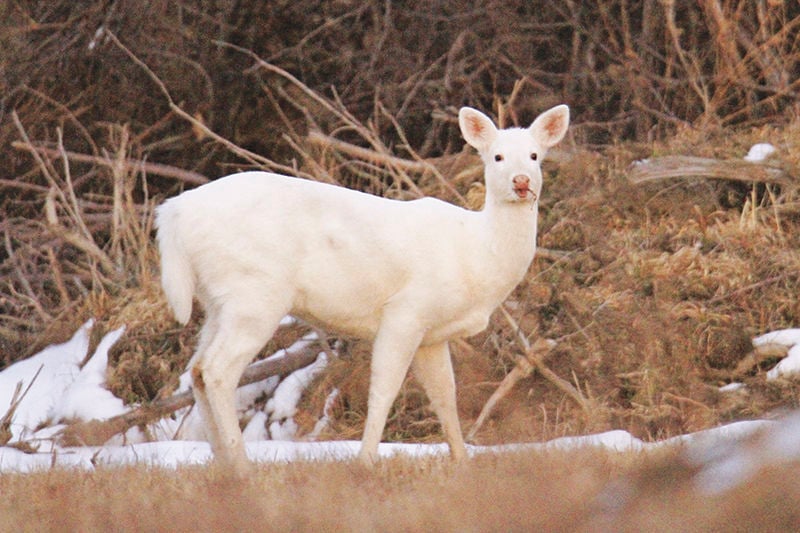 A white whitetail looks for some winter grasses to chomp on at Deer Haven Park recently.

A white whitetail looks for some winter grasses to chomp on at Deer Haven Park recently.

The air has not only quieted from the chatter of the birds but also is visibly devoid of their very presence. A transition is occurring, a tipping of the scale as daylight wildlife beyond the fence at Deer Haven Park succumb to the tranquility of dusk. In turn, the stirring of the crepuscular creatures like that of the whitetail deer are just beginning their eventide search for sustenance.

Winter is always a challenging time of survival for any non-hibernating wildlife species. The white and brown whitetail deer are no exceptions. Fierce winter winds with chilling factors registering temperatures much lower than that of the actual thermometer, accumulated snow, and gray, overcast daylight hours all play a part on the hourly existence of the whitetail and how they sustain until spring. January through March are crucial times in these beautiful creature’s lives.

Fortunately, Mother Nature has assisted. Late fall into early winter finds the whitetail’s coats changing from reddish auburn to grayish brown. The environment correlated color change comes not only for a blending protection from predators but is also replete with a thickened undercoat for added warmth. Along with this, the deer have been blessed with an innate nutritional understanding of their body’s seasonally changing digestive systems.

As herbivores, deer prefer leaves, twigs, grass, corn, alfalfa, clover, acorns, and fruit, to name but a few. They also are ruminants, meaning they have four stomachs. They will ingest food only to later regurgitate a bolus of its undigested substance. After chewing this cud, they re-swallow as a final digestive step that will ultimately serve for nutritional absorption.

The interesting caveat is that the deer stomach does not digest with acidic juices, but with microorganisms. These microorganisms will vary depending on the types of food ingested, and without the proper microorganism present, the foods ingested will serve of no nutritional value to sustain life.

Thus, when a seasonal weather change of diet occurs, a deer can consume a different food type but may not get its nutritional value until their body adjusts with the right microorganism culture to produce proper digestion. This occurrence can sometimes take up to three weeks. Keep in mind that many does are expecting fawns come spring. Have you ever tried going without nutrition for three weeks? In winter?

Fortunately, whitetail, knowing what to eat to survive, will fatten up in the autumn, adding up to one-fourth their body weight in fat reserves to help sustain them throughout winter’s freeze. If necessary, they will restrict their wintertime movement to nearly nil to retain those reserves. Additionally, the whitetail’s heart rate and general metabolic rate decrease in winter to aide in energy conservation. Winter’s diet veers more toward high fiber, easily digestible foods like woody browse such as twigs, saplings, branch tips, buds, lingering leaves, and any grasses that can be found.

Also fortunate for the whitetail herd at Deer Haven Park is the seasonal planting of clover, alfalfa, soybeans, turnips, corn, and numerous fruit trees to help sustain a healthy herd throughout the seasons. Clover is a crop which thrives well throughout winter into early spring.

Even now, winter plantings are taking place to accommodate early spring replenishing of healthy reserves for the herd. An ongoing endeavor in sustained health for a publicly revered, ancient, and majestic white whitetail herd found only beyond the fence.

Dee Calvasina is a freelance writer and monthly columnist who supports the conservation of nature and all wildlife at Deer Haven Park, LLC. To keep abreast of the upcoming tour season and events, visit deerhavenpark.org, like them on FB, or call 8-DEER-TOURS (833-378-6877).