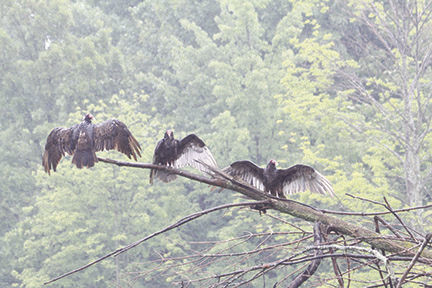 The coronavirus pandemic may have halted group bus trips through Deer Haven Park, but it hasn’t stopped the wildlife from doing their thing. Visitors can now take self-guided tours to explore the wonders.

The clouds were a collage of cotton puffs, exhibiting varying hues of gray that were reminiscent of the shades in shale rock as it is dampened by lakeshore waves. The rain would surely follow, but the anticipated excitement surrounding Deer Haven Park, LLC on this grand opening auto-guided tour day would shine a different kind of light — one which would charge the moisture-laden air beyond the fence with heart driven electricity.

DHP staff and volunteers readied for the 9 a.m. opening donned in rain gear and smiles. What better way to spend the day than to share the majesty and mystery of the park with the public? Questions silently abound however: Would the public come out to support this one and only known herd of white, whitetail deer in their natural environment? Would they support the COVID-19 restriction-led decision for individual app guided vehicle tours? Would they let the rain hinder their visit on this historic first day?

Hindered they were not, and supportive they were, as cars began to arrive directly upon the ticking of opening hour. With a responsible amount of distance and timing placed between each vehicle, carloads of families and friends began to make history as the first auto tours began.

The clearly designated eight-mile, 90-minute tour gave visitors, via a downloaded app with virtual tour guide, a military history of the former Seneca Army Depot from its beginning groundbreaking takeover in 1941 through its many decades of defense service. As well, sojourners were educated on the variety of wildlife that call this park home.

Hailing from all over the Finger Lakes and Southern Tier areas, vehicles came and went, including one family, the very first to tour, that resides in Philadelphia. Andrew and Amy Bowers, along with their two daughters, were camping at Taughannock Falls State Park.

“Friends and family suggested that we come to see the deer,” shared Andrew. Daughters Beatrix and Sylvie, seated in the back, were wide eyed excited to share that they had seen 29 brown deer, one buck in velvet rack, four white deer, and one fawn! (But who’s counting?)

Car after car shared seeing numerous brown deer and many white. Other accounts of wildlife encounters included mink, rabbit, and wild turkey. One happy tourist commented on the whole experience as being “more relaxing than a massage.” Yet another, referring to their encounter with a white doe stated, “Seeing one is so unique, it’s like seeing a unicorn.”

As the rains abated to a fine, warm mist, there suddenly appeared high above the Visitor Center a menagerie of turkey vultures. Circling, they hovered and lofted, as more of their kind joined in this air spectacular. It was as if they wanted to see what all the hubbub was about. Then one by one they landed, lining up one after another atop the fence posts and wood piles that bordered the parking area, facing crew and visitors alike. It was here they spread their wings, holding fast this display, as if to say all was well and to sanction the human recognition and support of their homeland. Perhaps, on some level of symbolic consciousness, a huge virtual hug?

An awe-inspiring sight to see! One that put a pause on lesser matters at hand that day and put focus right where it was intended — toward the sanctuary of the park’s wildlife. Most assuredly one of those once in a lifetime experiences that can be witnessed while beyond the fence. When last did you have such a breathtaking encounter?

Come, experience life revealed at DHP, and partake in an adventure of a lifetime.

Dee Calvasina is a freelance writer and monthly columnist who supports the conservation of nature and all wildlife at Deer Haven Park, LLC. To show your support of these ongoing efforts, come tour. Visit deerhavenpark.org, like them on FB, or call 8-DEER-TOURS (833-378-6877).

LEGAL NOTICE Notice is given that articles of organization for