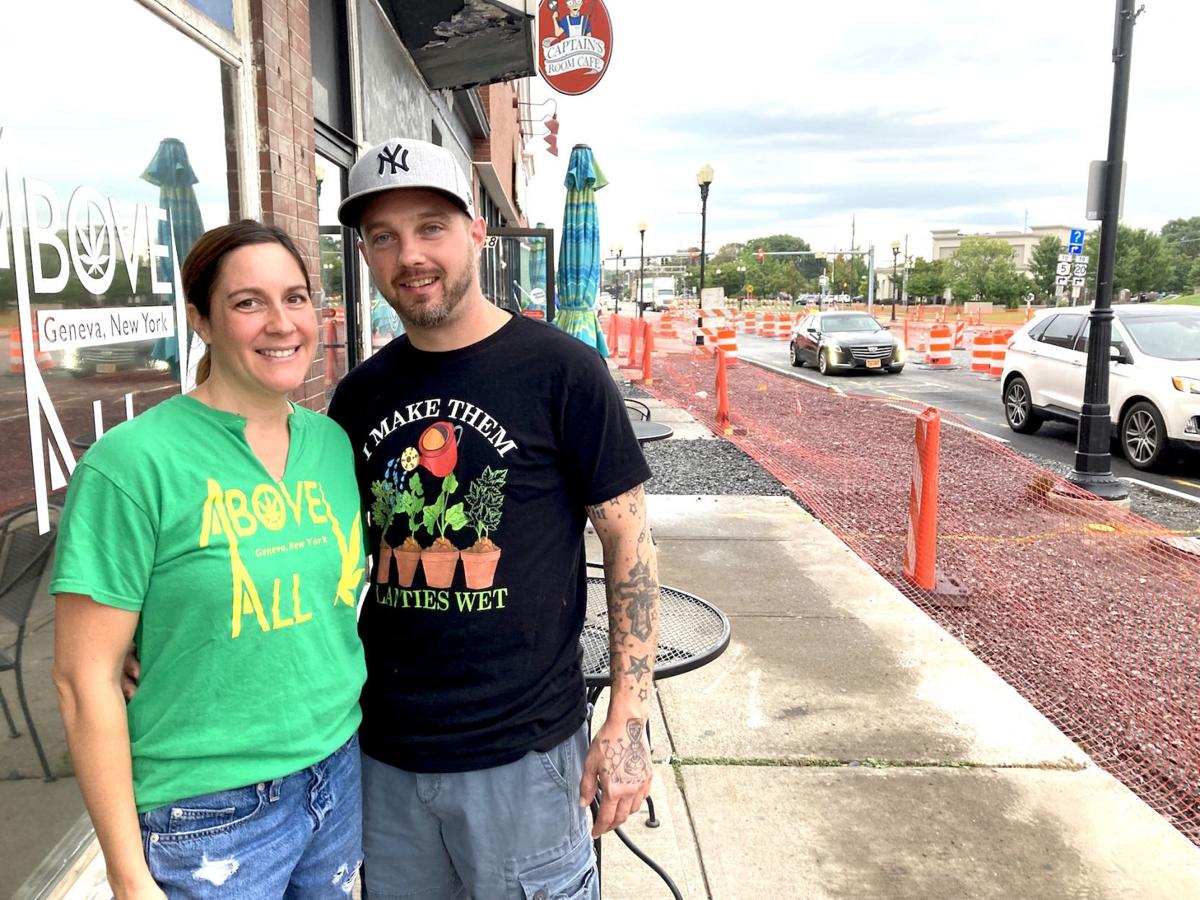 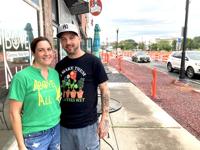 Jen and Derek Sandroni stand on the narrow sidewalk on Exchange Street in Geneva near the two businesses they own — Above All and the Captain’s Cafe. The businesses, like so many others in the area, have struggled during the Downtown Streetscape project, currently centered on the section of Exchange between Castle and Lake streets. 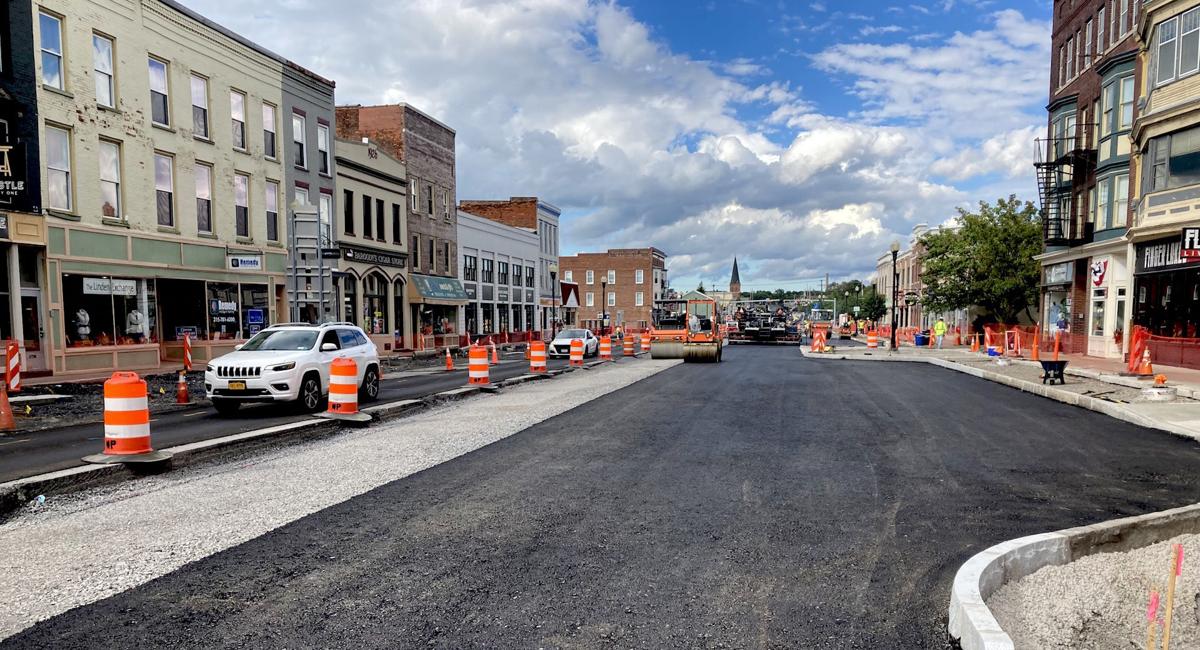 Exchange Street paving continued on Thursday in Geneva. The goal to have work done in this portion of the city’s DRI Downtown Streetscape project completed by October.

Jen and Derek Sandroni stand on the narrow sidewalk on Exchange Street in Geneva near the two businesses they own — Above All and the Captain’s Cafe. The businesses, like so many others in the area, have struggled during the Downtown Streetscape project, currently centered on the section of Exchange between Castle and Lake streets.

Exchange Street paving continued on Thursday in Geneva. The goal to have work done in this portion of the city’s DRI Downtown Streetscape project completed by October.

GENEVA — Jenn Sandroni measures business at the Captain’s Café in part by the number of people who stop into her breakfast and lunch spot on North Exchange Street.

And what she has seen is not good. The number of customers at the café is down significantly over the past two years when compared to 2019.

COVID-19 put a significant hit on the restaurant in 2020, and in 2021, it’s the DRI Downtown Streetscape work doing the damage, she said.

Foot traffic has plummeted since the project started in June with sewer line work done in advance of the street project. And the neighboring business owned by her husband, Derek Sandroni, Above All Smoke Shop, which plans to sell cannabis and cannabis products in 2022, also has seen reduced foot traffic, she added.

Sandroni noted the delays that have set the project back at least a month, including the sewer work and the removal of trolley line rail ties buried below the Exchange Street pavement.

And while city officials have promised to keep businesses accessible, many are staying away amid the noise, dust and heavy equipment in the first phase of the streetscape project, she said.

“I feel like our block is the guinea pig (for the rest of the DRI Streetscape project),” said Sandroni, taking a break from her café this past week.

The promise, she said, is that the contractor, Nardozzi Construction, will be finished with this portion of the downtown improvement project by Oct. 1.

Given what has transpired so far, she’s skeptical.

“I have no confidence it will happen by October,” she said.

And even if it does, she said the damage is done. June, July and August, when the city is full of summer tourists, are normally her busiest months. Not so this year.

“We passed our window of opportunity,” she said, noting that she and her husband have taken out loans to help keep the restaurant afloat during the past two years and that they are “sustaining.”

But that’s about it, she said. That’s why she is leading an effort to convince the city to provide financial relief for merchants in the Exchange Street construction zone. In a petition she created, merchants are asking the city to provide assistance though federal covid relief funds under the American Rescue Plan Act. Signatures from every business in the zone are included.

City Council will take on the issue at its workshop session Wednesday, said City Manager Sage Gerling, who has talked with Sandroni about city assistance for the beleaguered merchants.

Gerling said there are potential ways to provide help.

“The guidelines do not allow to use ARPA funds specifically for construction-related financial impacts to businesses and non-profits,” she said. “However, City Council can allocate loan or grant funds to mitigate financial hardship to small businesses and non-profits due to the negative economic impacts of COVID-19, which still continue to be felt.”

Gerling said Council will discuss ARPA fund allocations for 2021 and ‘22 — the money is coming into the city over a two-year period — at the Sept. 15 meeting, which starts at 6:30 p.m.

Two council members who responded to requests for comment from the Finger Lakes Times on the matter said they support relief for Exchange Street merchants.

“I 100% support our small businesses,” he said. “They are our lifeblood. The businesses along Exchange are some of the most inclusive, diverse, and affordable businesses we have to offer. The 2020/21 pandemic ate up much of their safety net and savings to weather that storm. Now the DRI has crushed their 2021 summer/fall tourist season. No one in their right mind is going to take a look down Exchange north of Castle, and say, ‘Let’s take a stroll down that!’”

He said last Friday illustrated how much merchants are suffering.

“All of downtown was busy — crushing,” he said. “Except North Exchange. Ghost town over there. I stopped into Los Amigos Taqueria, parking near the back alley and walking through hedges to buy the whole family dinner. The owner was defeated. ‘It’s Labor Day weekend, Friday night!’ she lamented. ‘Where are the people?’”

Pealer said his “heart just breaks, because I lived that life with my family from 1988 to 2003, busting butt to stay open, living week to week because your family wants a shot at the American dream. … That is why I think as much of this money as possible should go to the taxpayers and small businesses. Geneva’s economic health should be the baseline of our triple bottom line (of priorities).”

“I definitely support this and know the sense of urgency many of these businesses are facing,” Gaglianese said. “Whatever is needed and whatever it takes to help stop the bleeding that most downtown businesses along Exchange street from Lake Street to Castle Street are facing due to the combination of COVID-19 and the DRI Streetscape construction project. I brought this concern up during our September Council meeting and stated we must act now not later. … It pains me to see how these businesses are struggling, and my fear is we may lose some during this difficult time.”

Gaglianese said he has been in contact with Jenn Sandroni regarding the issue.

“Our downtown business district was on the up with a lot of promising things happening before the pandemic, a lot of new businesses moving into empty storefronts, and I believe our downtown was making a name for itself as a place you wanted to check out,” he said. “That is why I believe as a council and as a city we must resort to every option available to help stop the bleeding many of our businesses are facing.”

Gaglianese, who works in construction, admitted it’s a “very complicated project,” but encouraged people to patronize the businesses in this area to help keep them alive.

Pealer said merchants aren’t the only ones hurting.

“I not only support these funds going to our affected businesses, but also funds in which our taxpayers can receive as well,” he said. “I’d like to see programs like grants for those families who worked through COVID. How about funding services and programs that the majority of residents can benefit from?”