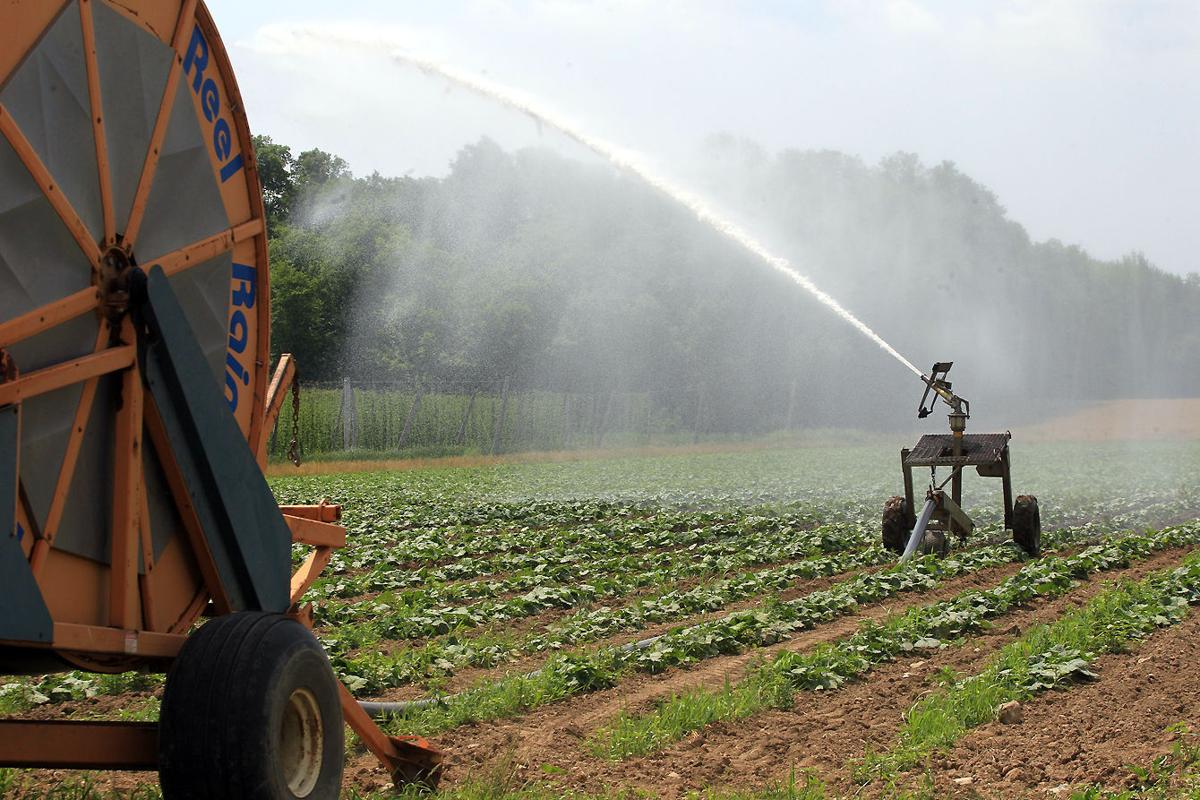 Pedersen Farms on County Road 4 kept the land irrigated during the hot summer of 2020. 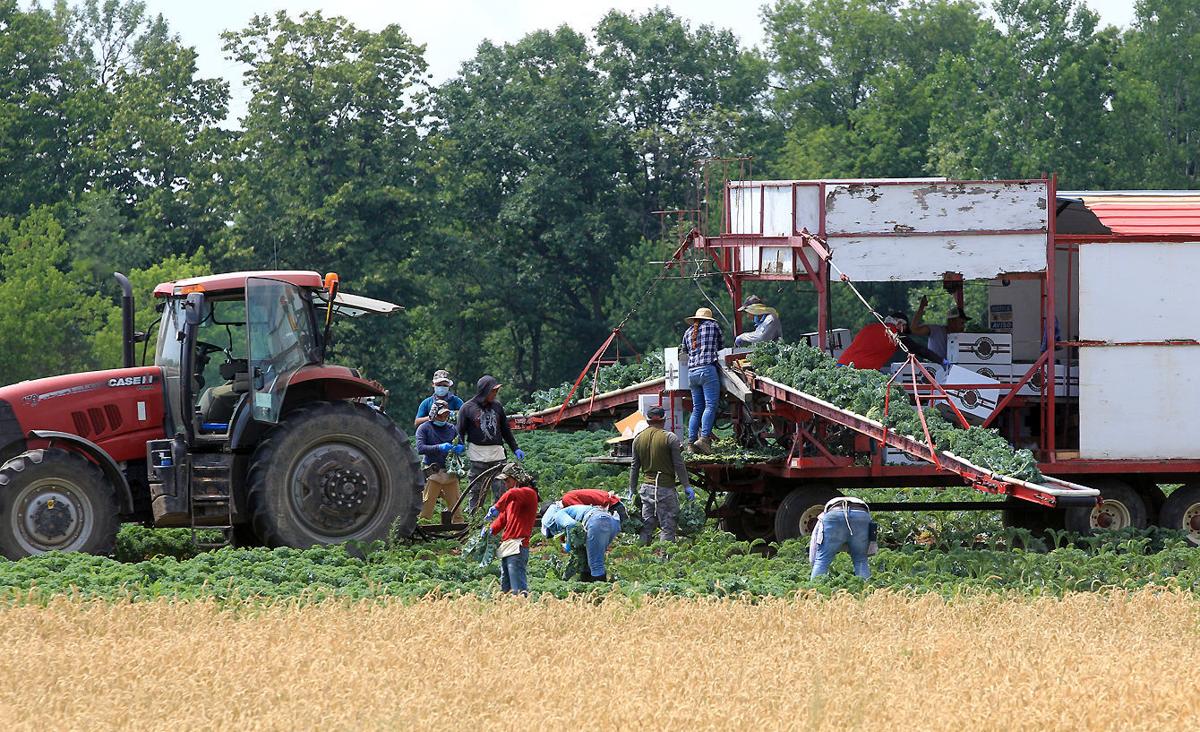 Scenes like this one at Pedersen Farms in Seneca Castle earlier this week are common in the Finger Lakes as farmers try to keep their crops irrigated. 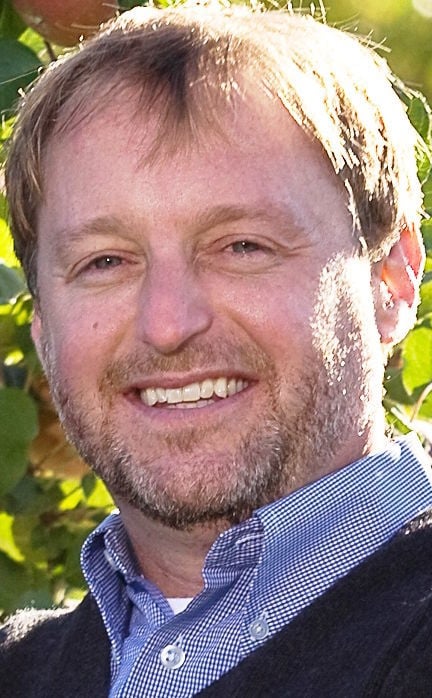 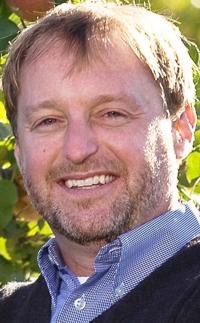 Pedersen Farms on County Road 4 kept the land irrigated during the hot summer of 2020.

Scenes like this one at Pedersen Farms in Seneca Castle earlier this week are common in the Finger Lakes as farmers try to keep their crops irrigated.

The crackle of brown, mostly dormant lawns tells you everything you need to know about what’s been happening with our weather.

Between searing heat and little rainfall, the Finger Lakes region is on the verge of drought.

While that may mean dry lawns at home and dusty trails for hikers, it’s a far more urgent issue for those who produce our food.

At El-Vi Farms — a large dairy producer straddling the towns of Arcadia and Phelps — it can be seen in the 3,100 acres of corn, alfalfa and pastures needed to keep its 2,000 cows and 1,750 heifers fed.

The winter wheat, from which they sell the grain and keep the hay, is fine because it was planted last fall. However, the acres upon acres of corn they grow for feed is doing poorly and the alfalfa they cut four times a season is producing poor yields, said crop manager Matt Wunder, who also is president of the Wayne County Farm Bureau.

The arid weather is to blame.

“We’re pretty dry,” he said. “We did get that rain two weeks ago over the weekend. It did help a little.”

Wunder said the rainfall deficit, combined with searing heat and dry winds, is sucking whatever moisture is left out of the soil.

The U.S. Drought Monitor reports that most of the state, including the Finger Lakes, is experiencing “abnormally dry” conditions but has not moved the region into the next level of “moderate drought.” However, parts of the central and northern New York regions are at that level.

Drought or not, “it’s definitely below normal,” said meteorologist Drew Montreuil of FLXweather.com.

Montreuil illustrated the rain deficit with June and July numbers from Geneva. The average June precipitation is 3.67 inches, but only 1.14 inches fell. For July, as of Friday, only 0.18 inches had fallen, at least officially; the average is 1.06 inches.

“That was a huge help to some fields,” she said. “North and west of Geneva did not receive that rain.”

And while some rain is forecast for today and into early next week, that precipitation won’t put much of a dent in the deficit, with the pattern of hot, dry weather expected to remain with us for some time, Montreuil said.

“I don’t see any big changes coming in the next couple of weeks,” he said.

In the meantime, crops of all sorts — from corn to vegetables to tree fruits — are suffering to varying degrees.

“We’re getting to that critical time for pollination for corn,” said Wunder.

And while even a little rain will help, he said crop yields will be lower and “the damage is pretty well already done.”

“Corn is the biggest user of water (of their feed crops),” he said. “It needs the most volume.”

At Red Jacket Orchards in Geneva, the hot weather has been great for some fruit crops, said Brian Nicholson, the company’s president and CEO.

“The cherries are in absolute heaven,” he said.

Nicholson said deep-rooted trees such as apples can weather through dry conditions longer than shallow-rooted plants.

“Anything in that category (of shallow-rooted) is hurting right now,” he said.

The growth process of a plant is affected when it has no water to draw upon, Joe Nicholson said. The patriarch of the Red Jacket Orchards family said he doesn’t need an official designation to tell him what’s happening.

“We’re in a drought,” he said. “All you have to do is look at the corn and soybeans. It’s clear these crops are struggling. All the normal processes get compromised because the plant is trying to survive.”

He said their nursery trees, as well as strawberries, have suffered in the scorching, dry conditions.

He noted that even deep-rooted plants such as apple trees are starting to show stress, and the effects could be seen in the current growing season and in 2021 through lower orchard fruit yields if some trees can’t produce as many buds.

“We need two inches of rain,” he said.

Over at Pedersen Farms in the town of Seneca, crop irrigation has been going on for three weeks, said Laura Pederson, who runs the farm with her husband, Rick. They grow vegetables — including cabbage, sweet corn, kale, squash and hops — and grains on 1,500 acres.

While the farm is able to irrigate, Pedersen said, it’s not the same as a day of gentle, soaking rain, which is not in the forecast for the next week.

“Our crops will definitely be affected,” she said, adding that their irrigation sources include Flint Creek and several ponds that still have ample water.

“So far, we’ve had enough water to keep going,” she said. “Without irrigation, our hops would be doing nothing.”

It’s the nature of the farming business to deal with changing conditions from year to year, including poor springs that bring late plantings to years when crops are deluged by summer rains.

Precipitation was not an issue in 2019, Pedersen noted.

“Last year, it didn’t stop raining until mid-June,” she said.

This, she said, is the other side of the farming equation.

While crops such as cabbage have time to recover, sweet corn, a summer staple for backyard barbecues, is likely to be smaller, given the shorter growing season, Pedersen indicated.

The Cooperative Extension’s Kickert said the news is not all bad.

“The great news is that there is an abundance of fresh vegetables and berries available at local farm stands as well as grocery stores,” she said. “Yes, it has been hot and dry. Crops that were planted early before it became dry were able to establish in the soil and the roots went down deep to tap into water there. So many of those are growing well unless they are on lighter soils. However, layer-planted crops did not emerge as well and are more likely to be stunted.”

Like Pedersen Farms, Kickert said “growers are irrigating vegetables as much as they can, which helps.”

For vegetables, there is some effect with the hot, dry weather, depending on the stage of the crop and whether irrigation is available. Also, Kickert explained, cool season crops such as green peas don’t grow well in the heat and will mature faster, making for a shorter season. Green beans may not set well now, but will put on a “new flush of flowers when temperatures cool down,” she added.

Many compare this year’s hot, dry conditions to 2016, when most of the Finger Lakes region and the state were left parched for months, causing far-smaller yields for many crops.

Montreuil said it’s too early to determine what the rest of the summer will look like, saying thunderstorms or tropical weather could move in and bring ample amounts of rain.

As a cautionary tale, he notes that in 2018, the region saw similar conditions until late July and early August, when heavy rains brought major flooding to the region, in particular Seneca County.

“This can change on a dime,” he said.