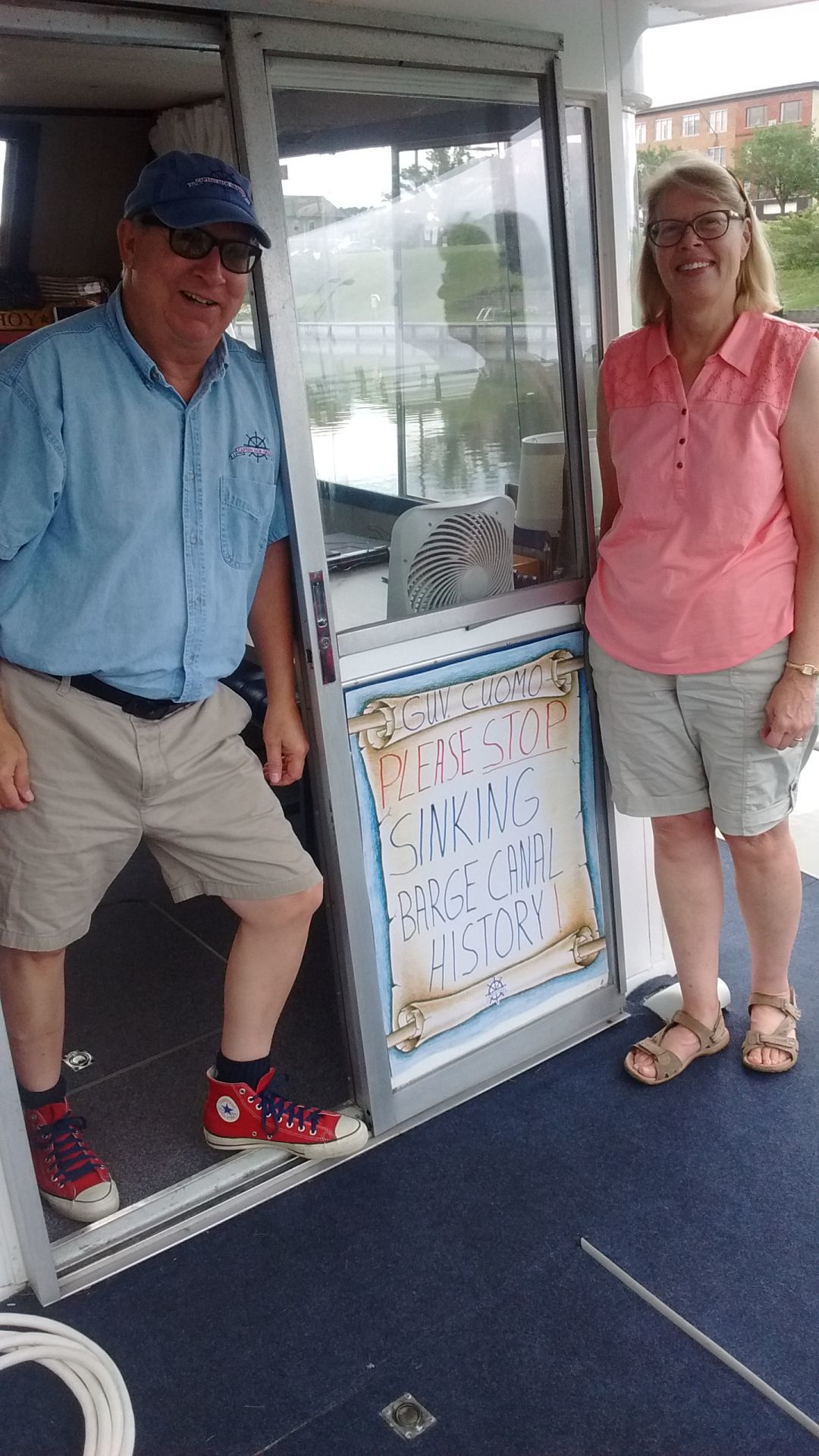 Bob Graham and his wife, Leslie, are seen on their houseboat-turned-protest vessel while docked at the Port of Newark Friday morning. The sign says, “Governor Cuomo, please stop sinking canal history,” in reference to the removal of historic canal boats for use to build up a fishing reef off of Long Island. 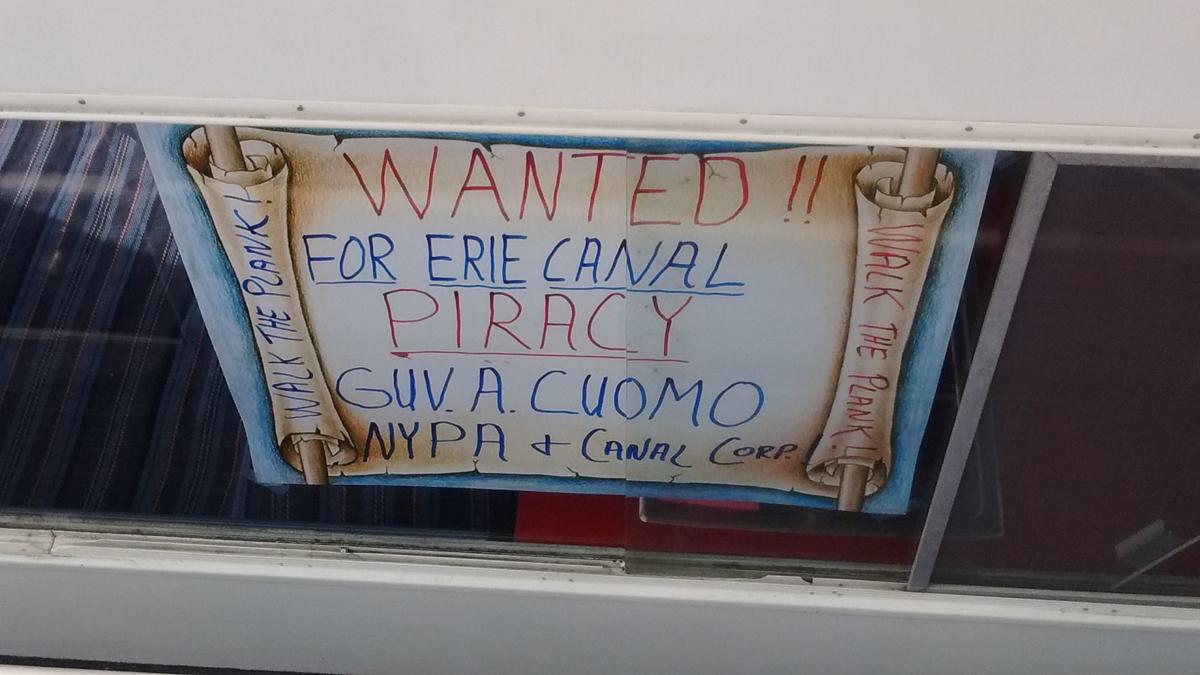 Another of Bob and Leslie Graham’s protest messages on their houseboat.

Bob Graham and his wife, Leslie, are seen on their houseboat-turned-protest vessel while docked at the Port of Newark Friday morning. The sign says, “Governor Cuomo, please stop sinking canal history,” in reference to the removal of historic canal boats for use to build up a fishing reef off of Long Island.

Another of Bob and Leslie Graham’s protest messages on their houseboat.

NEWARK — As Bob Graham and his wife, Leslie, cruised down the Erie Canal toward Newark last week, they brought with them a message conveying what they think about the way the canal system is being operated under the eye of the New York Power Authority.

Actually, there was more than one message, and they were in the form of protest signs placed at various points of their houseboat, the Captain Jack. The vessel was named for Graham’s grandfather, a boat captain on the Barge Canal during the days when commercial shipping was still big business and could include anything from cement to jet fuel.

Graham, a retired teacher and author of three books on canal history, doesn’t like the changes the Power Authority is making as the agency in charge of the Canal Corp.

The signs point to such as changes as the shorter navigation season and what he calls poor treatment of canal workers.

Another takes aim at the recent state decision to remove a number of decommissioned canal boats for placement at the bottom of the Atlantic Ocean as part of a plan by Gov. Andrew Cuomo to fortify a fishing reef off Long Island.

Another suggests Cuomo, the Power Authority and the Canal Corp. are guilty of piracy and should “walk the plank” as their punishment.

And while Graham, of Irondequoit, employs humor to get his point across, his message is dead serious: The viability of the canal as a cultural and recreational resource is being damaged by what he sees as ill-conceived decisions by short-sighted state bureaucrats, some of whom Graham believes have no appreciation for the canal’s impact and history.

Graham was so angered by the state’s decision to identify nearly 30 decommissioned canal vessels as possible reef-building material that he wrote a letter to the governor imploring him to reverse course.

“I thought to myself, ‘I’ve got to do more than this (complain),” Graham sad as he sat with wife, Leslie, while docked in Newark Friday morning. “I can’t just sit there.”

Thus, the letter to the governor.

“Canalers statewide are utterly dismayed and disgusted by the attitudes and policies of NYPA and the Canal Corporation,” he wrote. “There has been only the slightest transparency and an arrogance of power regarding decisions made about our historically important state canal fleet and about the length of the navigational season. People, including canal employees have been figuratively strong-armed for expressing opposition to the misguided policies.

“Please, Governor, stop the nearly wholesale scrapping of the historic New York Canal fleet. The poor, uninformed, arbitrary decisions made by the power structures at NYPA and the Canal Corporation regarding our state nautical heritage are a sad reflection on you.”

He asks Cuomo to “help us to save the Blue Boats (state canal vessels) in whatever capacity,” either holding onto them for operation or as historic displays.

Graham’s words have resonated with other canal enthusiasts, including Art Cohn, captain of the tugboat C.L. Churchill, which is on a cross-state canal tour with the Corning Glass Barge and the Lois McClure, a replica canal schooner. The tug and the McClure are part of the permanent collection of the Lake Champlain Maritime Museum.

Cohn wrote that “it seems to me that the New York Power Authority, the new caretakers of the New York State canal legacy, appear to be so sure of their vision of the future that they feel it is appropriate to impose irreversible decisions about what is good, bad, valuable and worthy of preservation without serious consultation with other long-standing canal partners and advocates. The perceived opportunity to clean up the historic floating-plant machinery scattered throughout the system by consigning them to a reef-building program without a serious discussion about alternatives, possible adaptive re-use within canal communities or museum settings seems destined to jeopardize the spirit of community and cooperation that has kept the canal viable for 200 years.”

Graham sees an “upstate-downstate antagonism” in the debate, because the canal system isn’t something most Big Apple residents can appreciate, even though it was the original Erie that transformed New York City into the nation’s center of international trade.

As for whether Graham and other canal enthusiasts are being heard, he points to an apparent decision by the state to pull the canal tugs the Pittsford and the Lockport off the endangered list.

“They are feeling some pressure,” he said.

New York Power Authority spokesperson Susan Craig said Monday there is no new information to report on the re-purposing of decommissioned canal boats.

Graham said Monday that the signs on the boat are staying up.

LEGAL NOTICE Notice of formation of RYSYD LLC Arts. of