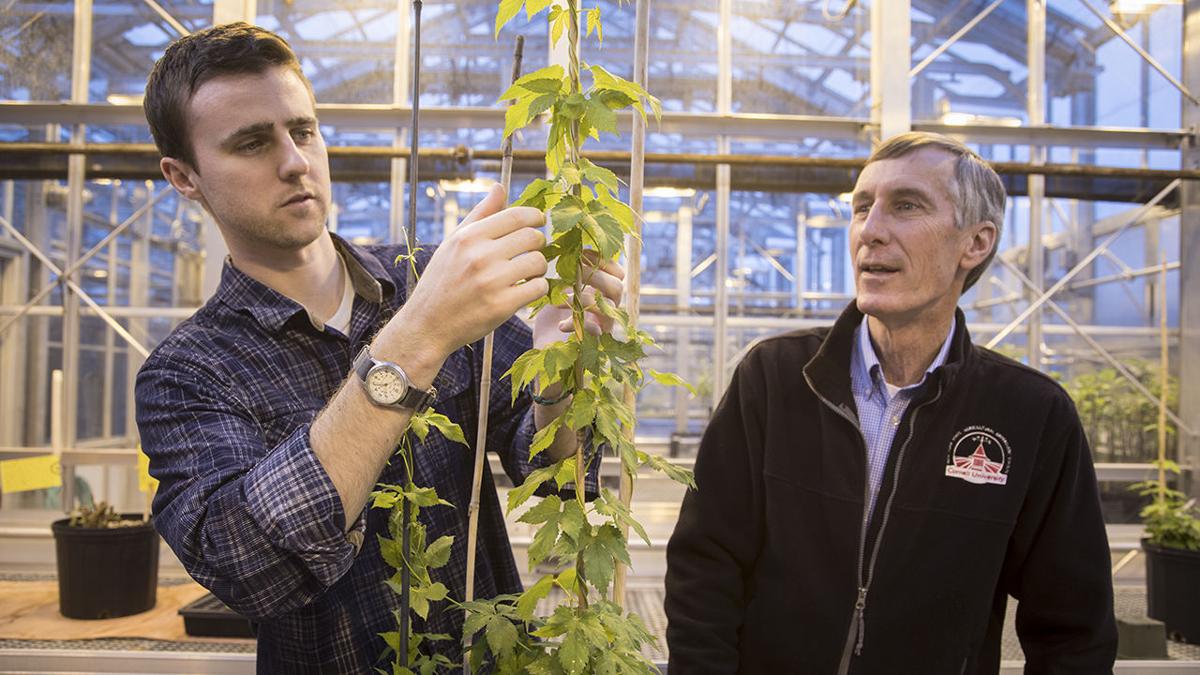 Doctoral student Bill Weldon (left) and plant disease expert David Gadoury examine a hop plant at the New York State Agricultural Experiment Station in Geneva. The two are providing guidance to the state’s hop growers. Below is a hop. 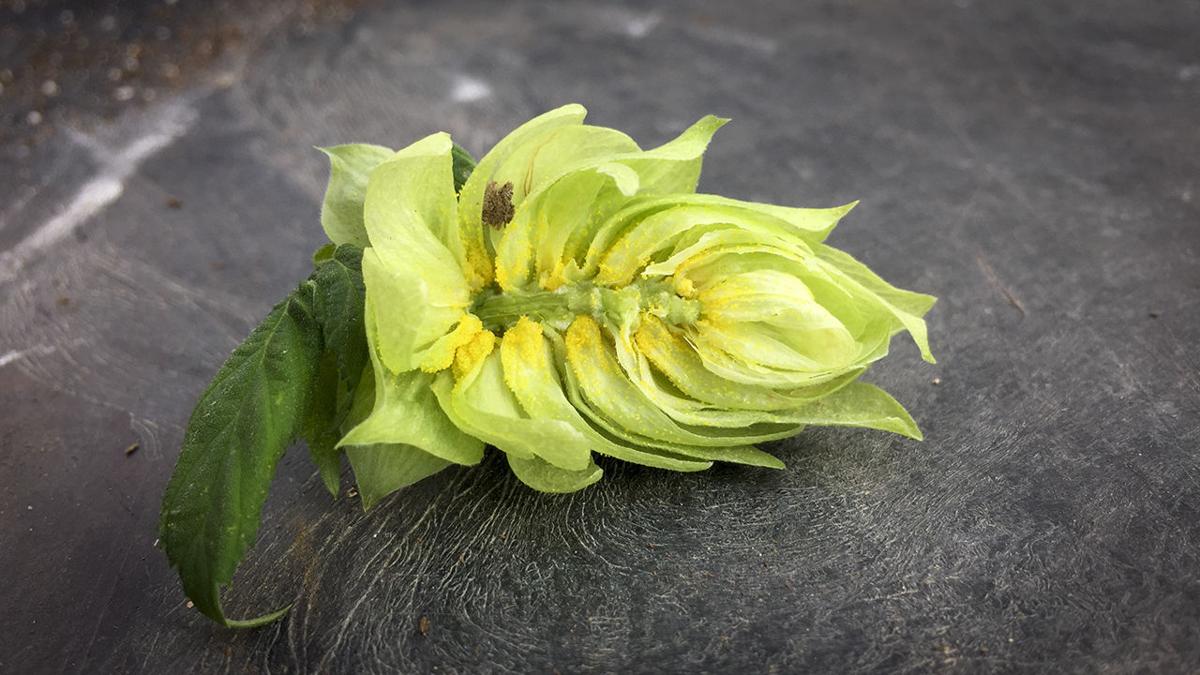 Doctoral student Bill Weldon (left) and plant disease expert David Gadoury examine a hop plant at the New York State Agricultural Experiment Station in Geneva. The two are providing guidance to the state’s hop growers. Below is a hop.

GENEVA — New York used to be king of the hop, before diseases put an end to the industry about 100 years ago.

The industry eventually moved west to parts of Oregon and Washington, where drier climates were more conducive to hop farming.

The days of dominating the industry probably won’t be returning, given those states now produce about 98 percent of all U.S. hops, but with the number of craft breweries tripling in New York in just four years, demand for high quality local hops is skyrocketing.

Additionally, under state farm brewery legislation, farm breweries must increasingly source their hops and other ingredients, such as barley, from New York farms, providing even more opportunity for farmers to cash in.

However, said plant disease expert David Gadoury, who works at Cornell University’s New York Agricultural Experiment Station at Geneva, many of them don’t know much about growing hops.

He said most of the state’s growers have just one to five acres, and most are less than five years old. Inexperience, combined with challenges from persistent hop diseases and pests, have resulted in inconsistent quality and failed crops.

Hops play a key role in a beer’s flavor and aroma.

Ian Boni is among those new hop farmers.

He is also a partner in Twisted Rail Brewery, which recently opened its third, albeit temporary, tasting room on Exchange Street in Geneva, where the long-term goal is converting the former movie theater into a tasting room, restaurant and music venue.

However, unlike some nascent growers, Boni didn’t go it alone. He looked to experienced hops growers, including Climbing Bines of Yates County, to help develop his three acres of hops off of Routes 5&20.

“They have some of the best hops around,” he said.

Still, Boni also learned by experience and faced one of the plant diseases that doomed hops growers about 100 years ago: powdery mildew, which Gadoury said thrives in years wet or dry.

The other disease that threatens New York hops is a “water-loving pathogen” called downy mildew, which is more prevalent in rainy years, said Gadoury.

Learning from the best

And while Gadoury is an acknowledged expert on mildew varieties, Weldon, thanks to Cornell and federal grants, traveled to the Pacific Northwest to learn best practices from the region’s experienced growers, who supply the nation’s biggest breweries.

Among those who have taken advantage of the work of Gadoury and Weldon is one of the state’s largest apple growers, Fowler Farms, based in Huron.

They’re now one of the state’s top hop growers after adding 30 acres three years ago at their 2,000-acre family farm.

J.D. Fowler said he got into hop farming to take advantage of demand from the craft beer industry and recent legislation that requires an ever-increasing amount of hops and other ingredients, such as barley, to come from New York farms.

“We thought we’d get in on the front end of it,” Fowler said.

But the effort hasn’t been easy, even for one of the state’s most successful apple farms.

“Hops are hops and apples are apples,” said Gadoury, who has also worked for decades with grape growers.

After a hot, dry 2016 summer, Fowler noticed a disease that turned out to be powdery mildew on some of the leaves of a hop variety called Zeus. And this year, after a wet summer, some of his crops fell victim to downy mildew.

Gadoury and Weldon visited Fowler’s farm in 2016, where they took samples. They suggested spraying safe chemicals and removing infected leaves and diseased plants.

For early in the following season, they advised spraying, pruning, training shoots and stripping lower leaves after the first year to reduce humidity.

Cornell is looking to provide that type of growing guidance around the state through outreach materials, public presentations and field visits. This past summer, Welden, whose doctoral focus is hops, and Gadoury fielded calls from New York growers, collected pathogen samples, diagnosed diseases and advised growers on management strategies.

Victor Pultinas, owner of Lake Drum Brewing on Castle Street in Geneva, said the New York hops industry is at an exciting juncture.

“There a lot of great farmers growing hops today in upstate New York,” he said. “The number of varieties grown is increasing and the quality is certainly improving. Producing high-quality beer is certainly feasible with the local ingredients that are available, but it does take some creativity on the part of the brewer.”

Pultinas said growing hops well in New York “takes time and money. It’s not quite as easy as is commonly thought.”

He said that “if brewers are to abide by the Farm Brewery (legislation) they have to be able to be flexible and not always consistent, which means the consumer has to be open-minded while experiencing a truly locally sourced craft. For example, you cannot expect to be drinking a hazy New England style IPA here in upstate made predominantly with New York hops.”

Consistent quality of the hops in general is also important, said Boni.

If they aren’t, he said, “it’s going to make a different flavor profile.”

About the Farm Brewing Law

According to the law, receiving a farm brewery license in New York state requires beer to be made from locally grown farm products, which, besides hops, includes barley. The law is being implemented on a schedule: until the end of 2018, at least 20 percent of all hops, malting barley and all other ingredients must be grown in New York state; from 2019 through 2023, no less than 60 percent of these ingredients must be grown in-state; and from 2024 on, no less than 90 percent must be state-grown.