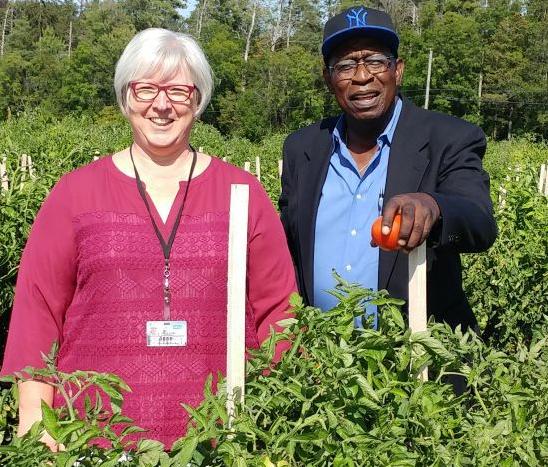 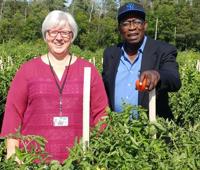 The co-chairs of Food Justice, Teresa Shaffer and Henry Farro, are seen in a 2017 gleaning operation. This past week, the Geneva City Council approved funding for the organization — which collects and distributes produce for the region’s needy — that will allow it create a permanent home at the Geneva Enterprise Development Center. 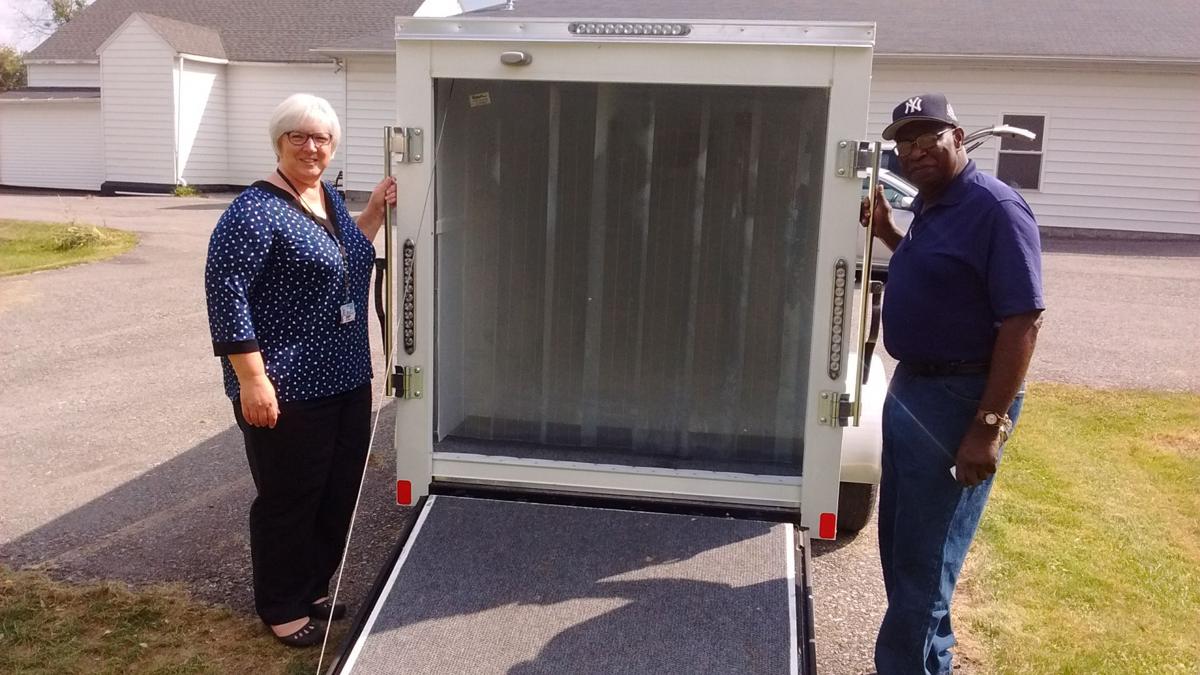 Teresa Shaffer and Henry Farro stand with the retrofitted mobile food trailer, which serves as a walk-in cooler for produce the Food Justice Coalition gleans from area farms. 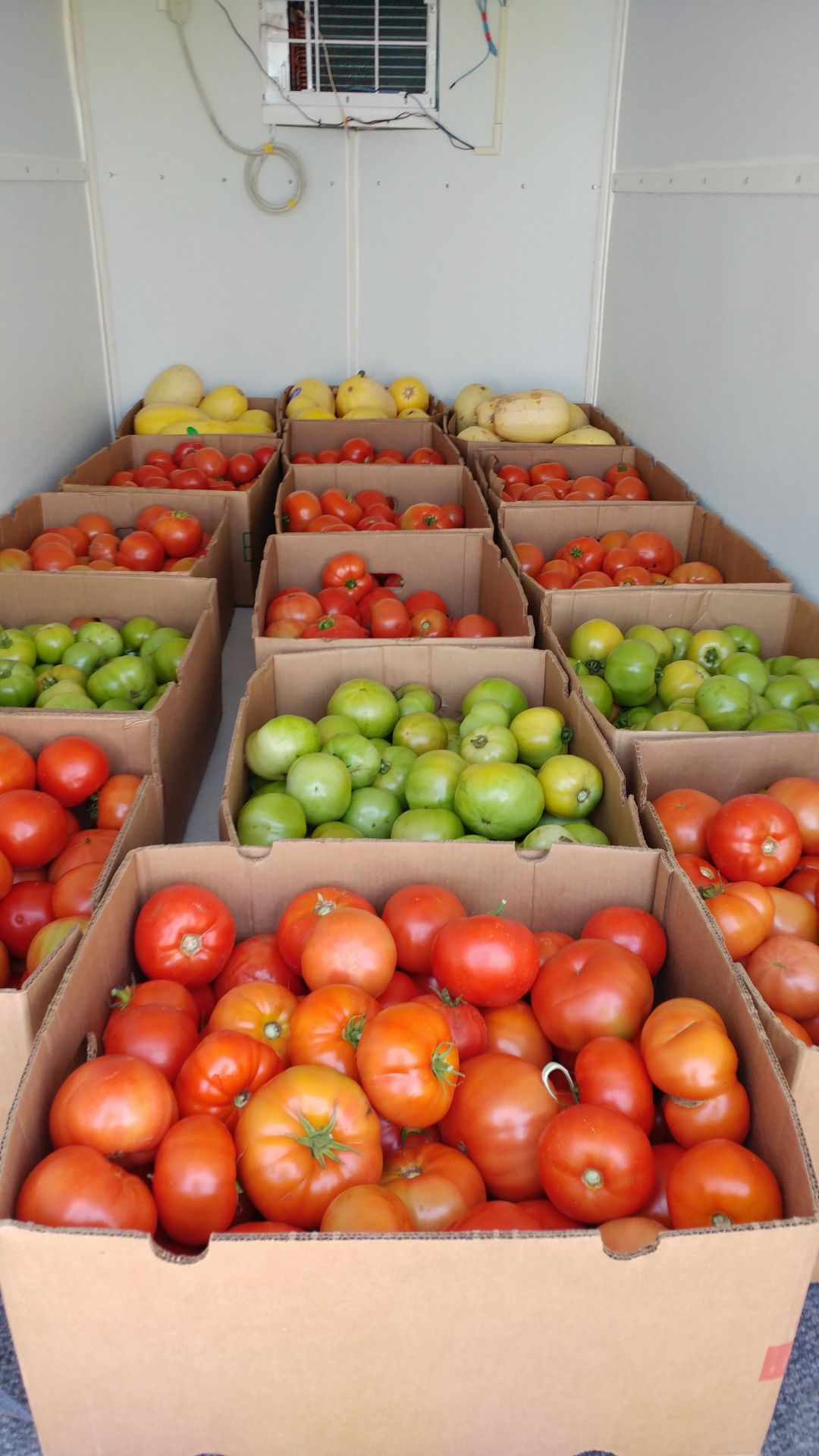 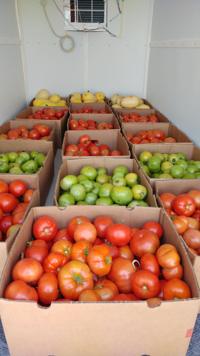 Produce is seen in the walk-in cooler in the trailer the Geneva Food Justice Coalition retrofitted. 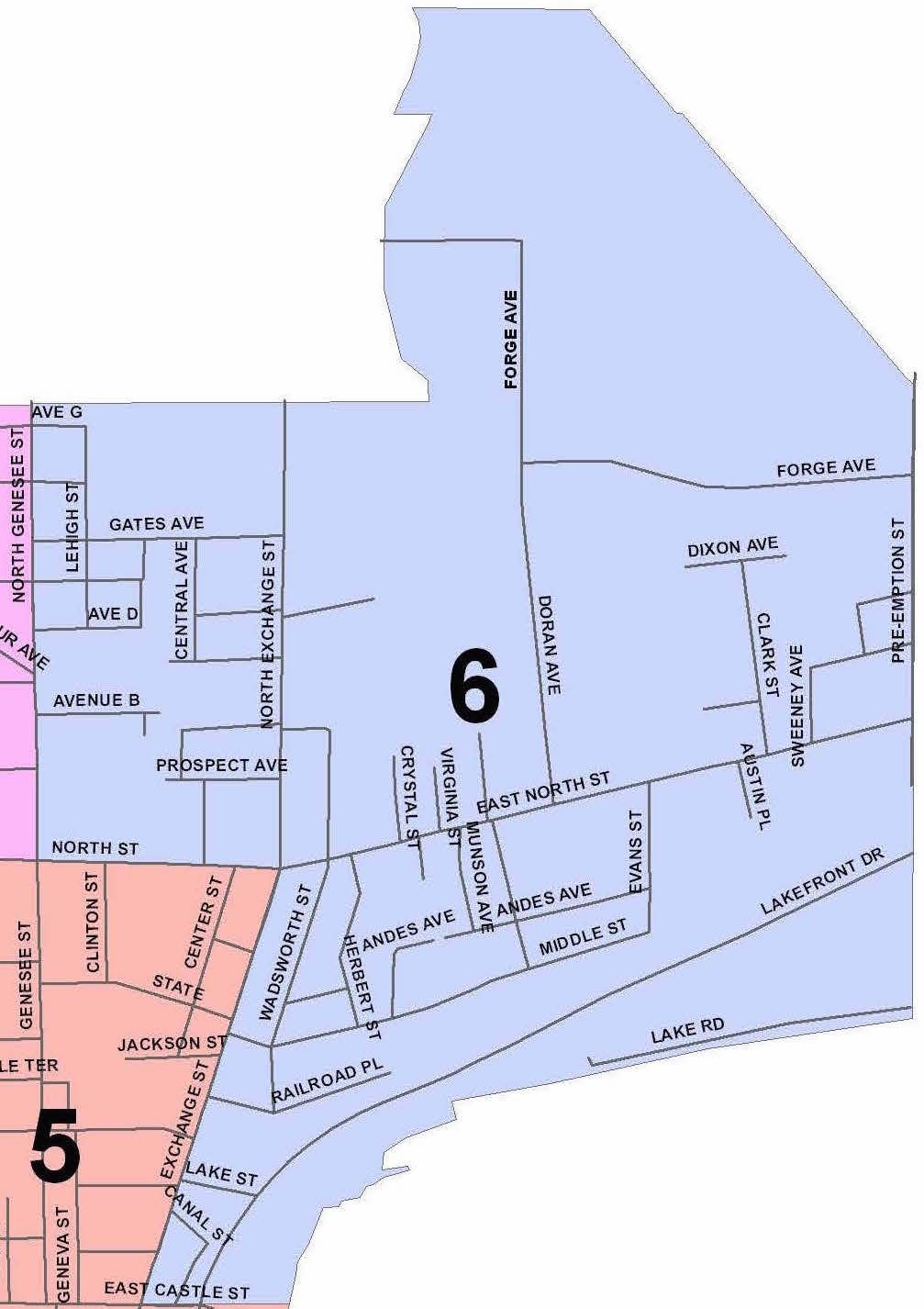 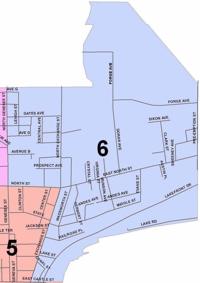 A map of the city’s Sixth Ward, designated a “food desert.”

The co-chairs of Food Justice, Teresa Shaffer and Henry Farro, are seen in a 2017 gleaning operation. This past week, the Geneva City Council approved funding for the organization — which collects and distributes produce for the region’s needy — that will allow it create a permanent home at the Geneva Enterprise Development Center.

Teresa Shaffer and Henry Farro stand with the retrofitted mobile food trailer, which serves as a walk-in cooler for produce the Food Justice Coalition gleans from area farms.

Produce is seen in the walk-in cooler in the trailer the Geneva Food Justice Coalition retrofitted.

A map of the city’s Sixth Ward, designated a “food desert.”

G ENEVA — They operate in a hardscrabble neighborhood that, so far, has not been the benefactor of a revitalized city downtown and lakefront.

No doubt, the neighborhoods near East North Street in Ward 6 have seen better days. Coined by the city as East Lakeview, any vista of Seneca Lake is often obscured by trains that run — and are stored — along the tracks near Routes 5&20.

Its derogatory nickname is the Butt End.

“This part of town is forgotten,” said Henry Farro, a strapping man with a personality to match who co-chairs the Geneva Food Justice Coalition.

Many call the semi-retired contractor Deacon Farro because of his position with Mt. Olive Missionary Baptist Church on Clark Street, which runs off East North and serves as a home to many activities and movements within the African-American and social-justice community.

This section of the city — as well as the northern section of Geneva west of Exchange Street — is classified as a “food desert,” defined as an area where access to fresh fruit, vegetables and other healthy whole foods is lacking.

While the area had a number of small grocery stores in its past, it is without one these days. The only store selling food on East North Street is the popular sub and pizza shop Momberger’s, which has some convenience store-type offerings in its cramped space.

The group gleans fresh produce from fields around the Finger Lakes that are then redistributed to a number of agencies serving people with lower incomes and/or without easy access to fresh food. Nearly 10,000 pounds were collected in 2016.

Because of the Geneva Foundry contamination issue, additional emphasis has been placed on helping to serve residents in the contamination zone. Residents there have been urged not to grow vegetables because their soil may contain lead and/or arsenic. The coalition is contributing produce to the Little Free Farmstand at the Geneva Peeps site on State Street.

The coalition is an outgrowth of Tools for Social Change, a social justice group that meets at Mt. Olive.

Farro was joined in his efforts by the group’s co-chair, Shaffer, a nurse with Ontario County Public Health and Clifton Springs resident. Her boss, County Health Director Mary Beer, assigned each public health nurse a school district as part of county outreach. Shaffer began attending Tools meetings and ultimately got involved in the Food Justice Coalition, going well beyond her job title.

Farro, Shaffer and Shaffer’s husband, Don, along with other volunteers, head out into the fields of Ontario County and beyond to pick food for redistribution to groups serving the needy. Among their largest suppliers is Bejo Seeds, a major seed producer based in California, which has a research farm on Healey Road in the town of Geneva. Another supplier is Seneca Castle Farm, which is operated by Jill McLellan and John Tarnow. Seneca Castle Farm asks only to be reimbursed for the seeds they must purchase, Farro and Shaffer said.

Dennis Ferlito, who heads the farming operation at Bejo’s Geneva site, said the relationship between his company and the Food Justice Coalition has been a good one, allowing the company to help its neediest neighbors have access to fresh vegetables produced on the farm.

He calls Farro, who grew up in Geneva but now lives in Seneca Falls, “a force of nature.”

Shaffer, he said, “is about the best person of any organization we’ve worked with.”

Ferlito said the coalition is one of several nonprofit groups that harvest at Bejo, but he clearly has an affection for their cause and how they operate. He said they come at specifically designated times and need virtually no assistance from Bejo’s small staff. In essence, they know what they’re doing.

Among the veggies the coalition gleans at Bejo, Ferlito said, are cabbage (lots of it), carrots, tomatoes and peppers.

Farro and Shaffer note that the coalition has worked with virtually no storage space, but the addition of their new mobile food trailer has been a big help. The cooler was purchased with funds donated by Tools for Social Change. The Geneva Neighborhood Resource Center, part of city government, helped them outfit it.

The trailer was ingeniously retrofitted to be a walk-in cooler, thanks to an idea from Shaffer’s husband, Don. It has an air conditioner that has been wired to think it can cool like a typical refrigerator.

It works, a Finger Lakes Times reporter found out when stepping into the trailer.

The trailer allows the coalition to glean vegetables over the weekend and store them until they can be redistributed to various recipients. When the Food Justice Coalition gets its 501(c)(3) nonprofit status, said Farro, it will raise funds for a truck to pull the trailer.

Food Justice’s other goals for 2017 include gleaning more than 10,000 pounds of food, and looking for a site to house its operations.

In search of a grocery store

The ultimate, goal, said Farro, is helping to bring a grocery store to the neighborhood.

He said there are some potential sites where a store such as Aldi, which does not have a Geneva location, could build. He notes that it’s very difficult for many of the neighborhood’s residents to get to the city’s grocery stores on Hamilton Street or farther down on Routes 5&20 at Walmart.

Some changes in policy and routes with Regional Transit Service have helped make it easier for people without vehicles to get to those grocery stores, said Sage Gerling, director of neighborhood initiatives for the city.

“Over the past two years we have worked with Regional Transit System to make changes to their routes to decrease the time to get to grocery stores via bus,” Gerling said by email. “These changes went into effect on July 31, 2017, and also included two new shopping shuttles (one targeted to residents on the northeast and north end of the city and town of Geneva and second for residents on the south side). These shopping shuttles go to multiple shopping areas and allow residents to bring on as many bags as they need. RTS was a great partner and jumped right in to collaborate on how they could adjust their schedules and also create a new program to better serve our residents.”

As for the East Lakeview neighborhood being perceived as “forgotten,” Gerling disagrees, noting a number of initiatives the city is taking to reinvigorate not only that neighborhood, but a section on the other side of Exchange. They’re both part of the food desert, as determined by the U.S. Department of Agriculture.

Gerling noted that in 2009, the city applied to the state Department of State for funds for strategic planning for the north-end area through the Brownfield Opportunity Area program. Brownfields are former industrial sites with forms of environmental contamination that need to be addressed before they can be redeveloped. She noted that the city was awarded the funds at the end of 2011, and the project began in early 2012.

“This is a unique program that allows a community to look holistically at an area that has been impacted from multiple brownfields and develop strategies that strengthen the area on many fronts,” she said. “Three revitalization themes emerged from our work with the residents, churches and businesses in this area: economic development, neighborhood quality of life and open space and connectivity.”

Gerling said it was “during this process that the food desert issue emerged.”

She noted that the corner of North Exchange and East North Street “was identified as a much-needed neighborhood commercial center that would be a prime location for a grocery store.”

In 2013, said Gerling, the city collaborated with the Local Development Corp. and the Industrial Development Agency to purchase and tear down multiple properties on the northeast corner of the intersection in an effort to entice development of “local or regional grocery store and other neighborhood retail or office space amenities.”

Gerling said the effort to redevelop the site continues.

Farro is not sure the location the city has identified for a grocery store is large enough for a decent-sized operation. He argues that there may be spots along East North Street that would be more appropriate.

In the meantime, the Food Justice Coalition’s work continues, with gleaning expected to continue well into the fall.

Farro emphasized that their work is not for glory.

“It’s not about us,” he said. “It’s about serving the people. Especially those that feel forgotten.”

Here are the benefactors of the Geneva Justice Coalition’s gleaning efforts: