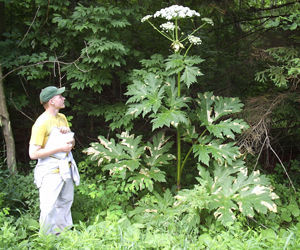 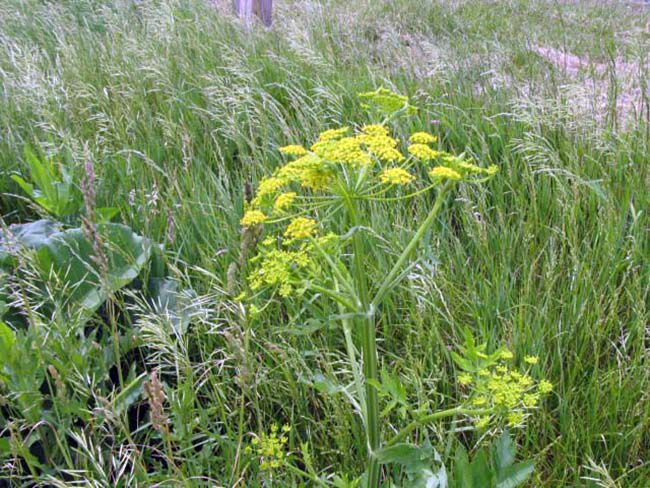 As its name implies, giant hogweed (Heracleum mantegazzianum) is a large plant, but although grandeur and showy in its appearance, it is an invasive plant that you don’t want to touch. Also, in the same family, Apiaceae — the carrot family, is wild parsnip (Pastinaca sativa), another invasive species to avoid. Both plants contain chemicals that can cause a toxic skin reaction when humans encounter the plant’s sap.

The carrot family contains more than 3,000 species including carrots, cumin, parsley, celery, dill, Queen Anne’s lace, poison hemlock, and many others. Some of these species, such as giant hogweed and wild parsnip, contain a chemical called furanocoumarins, which, when combined with sunlight can cause phytophotodermatitis, a serious skin inflammation. The chemical prevents the skin from protecting itself against sunlight, which can lead to a severe sunburn. The reaction can be as mild as skin discoloration or as severe as large, painful blisters. The effects of giant hogweed can be much worse than that of wild parsnip, with some blisters similar to third-degree burns, permanent scarring, discoloration of the skin, increased sensitivity to sunlight that may last for years, and contact with the eyes could lead to blindness.

Giant hogweed is native to the Caucasus Mountain region of Eurasia, between the Black and Caspian Seas. Because of its large size and impressive flower heads, it was introduced to Europe and the United Kingdom as an ornamental in the late 1800s and to the United States in the early 1900s. One of the first North American plantings was in New York State, in gardens near Highland Park in the City of Rochester. As is the case with many invasive species, giant hogweed escaped cultivation and has now become established in New York, Connecticut, Illinois, Maine, Massachusetts, Maryland, Michigan, New Hampshire, Ohio, Oregon, Pennsylvania, Virginia, Vermont, Washington, Wisconsin, and parts of Canada.

Characteristics of giant hogweed— White flowers clustered into an umbrella-shaped flower cluster, up to 2.5 feet across, blooms between June and July (note: plant generally produces a flowering stalk in 3 to 5 years but can take up to 8 years or more)

— Huge leaves, incised and deeply lobed, up to 5 feet across

— Stems are green with purple splotches and coarse white hairs, 2-4 inches in diameter

— Seeds are dry, flattened, oval and approximately 3/8-inch-long and tan with brown lines

Except for its towering size, giant hogweed can easily be mistaken for other plants such as cow parsnip, Angelica, poison (or water) hemlock, Queen Anne’s lace, and elderberry. Cow parsnip is the closest look-alike, and it may have a green to a slightly purple stem, but if there is purple, it is solid, not blotchy as it appears on the stem of giant hogweed and the hairs on cow parsnip stems are much finer, fuzzy instead of bristly. Angelica has smooth, waxy purple stems. Poison hemlock may also have a blotchy or solid purple stem but is smooth and waxy with no hairs or bristles. Queen Anne’s lace and wild parsnip both have green stems, with no purple present. Consult a plant identification guide for more descriptive identifying characteristics of each plant.

Wild parsnip is native to southern and central Europe and is believed to have escaped from parsnip that was under cultivation, possibly brought to North America as a root crop by colonists as early as the 1600s. It has become established across New York State and throughout the northern United States and southern Canada. In the U.S., its range extends from Vermont to California and south to Louisiana (currently, it is not found in Hawaii, Mississippi, Alabama, Georgia, and Florida).

Characteristics of wild parsnip— Yellow flowers clustered into an umbrella-shaped flower cluster, 4-6 inches wide, blooms between May to mid-July (note: flowering usually occurs during the second year of growth)

— Stems are yellowish-green with vertical grooves

Both plants can be found growing in a wide variety of habitats including roadsides, fields, pastures, along trails, any place where the soil has been disturbed, and along streams and rivers.

What to do if you see giant hogweedMaking sure to keep your distance, try to make a positive, visual identification. If you are unsure or think that you have positively identified it, take high-resolution photos of the entire plant, stem, leaves, flowers and/or seeds. Photos and detailed directions to the infestation can be emailed to DEC at ghogweed@dec.ny.gov or contact your local Cornell Cooperative Extension office for assistance with identification.

DEC crews visit each confirmed infestation site of giant hogweed and use an appropriate control method for the size of infestation and location. This service is free of charge to the landowner. Generally, for infestations of less than 400 plants, root-cutting is used to control the infestation and at sites of more than 400 plants, herbicides are used. Flower/seed head removal is used at all sites, as seeds can remain viable for 10 years, and to limit seed dispersal. Sites are visited each year until the plants are eradicated. When no more plants are found the site will be monitored for an additional three years. For sites to be monitored and controlled, the landowner must give annual permission.

What to do if you see wild parsnip After making an identification, manual removal of plants can be effective for new infestations and small areas. When removing plants, wear gloves, long-sleeved shirts, pants, boots, and eye protection to prevent contact with the sap. Synthetic, water-resistant materials are recommended. Before the plant going to seed, cut the root 1-2 inches below the soil or pull by hand. If removing the plants after they have gone to seed, cut off the seed head and place it in a plastic bag. Leave the bags in the sunlight for one week to kill the seeds before disposal.

Mowing only after it has flowered, but before it goes to seed, can kill the plant. Mowing at other times may favor wild parsnip. Some plants may resprout and need to be mowed again. When mowing, take precautions to prevent sap from contacting skin and eyes.

Make sure to clean all protective clothing, gear, tools, and equipment thoroughly after contact with wild parsnip. General herbicides such as glyphosate or triclopyr can be applied as spot treatments to basal rosettes. Be sure to follow product labels carefully.

Plan to monitor the area long-term for seedlings emerging from the seed bank.

Immediately wash the area with soap and COLD water and keep the area away from sunlight for 48 hours. If a reaction occurs, see a physician.

LEGAL NOTICE Notice of Formation if a Limited Liability Company