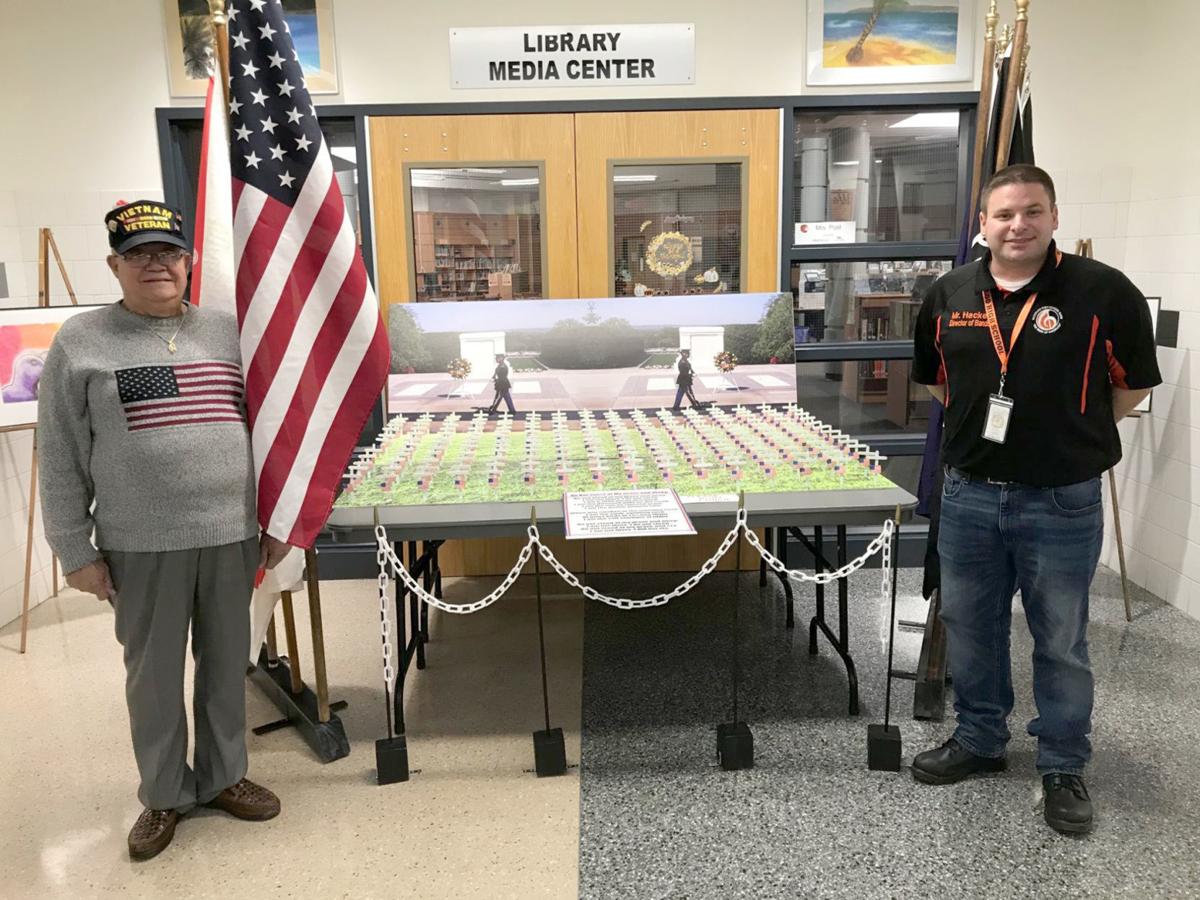 Vietnam veteran José Caraballo of Waterloo made a miniature version of Arlington National Cemetery, which was on display Wednesday during the annual veterans dinner and concert at Waterloo High School. At right is Dan Hacker, the school’s band director. 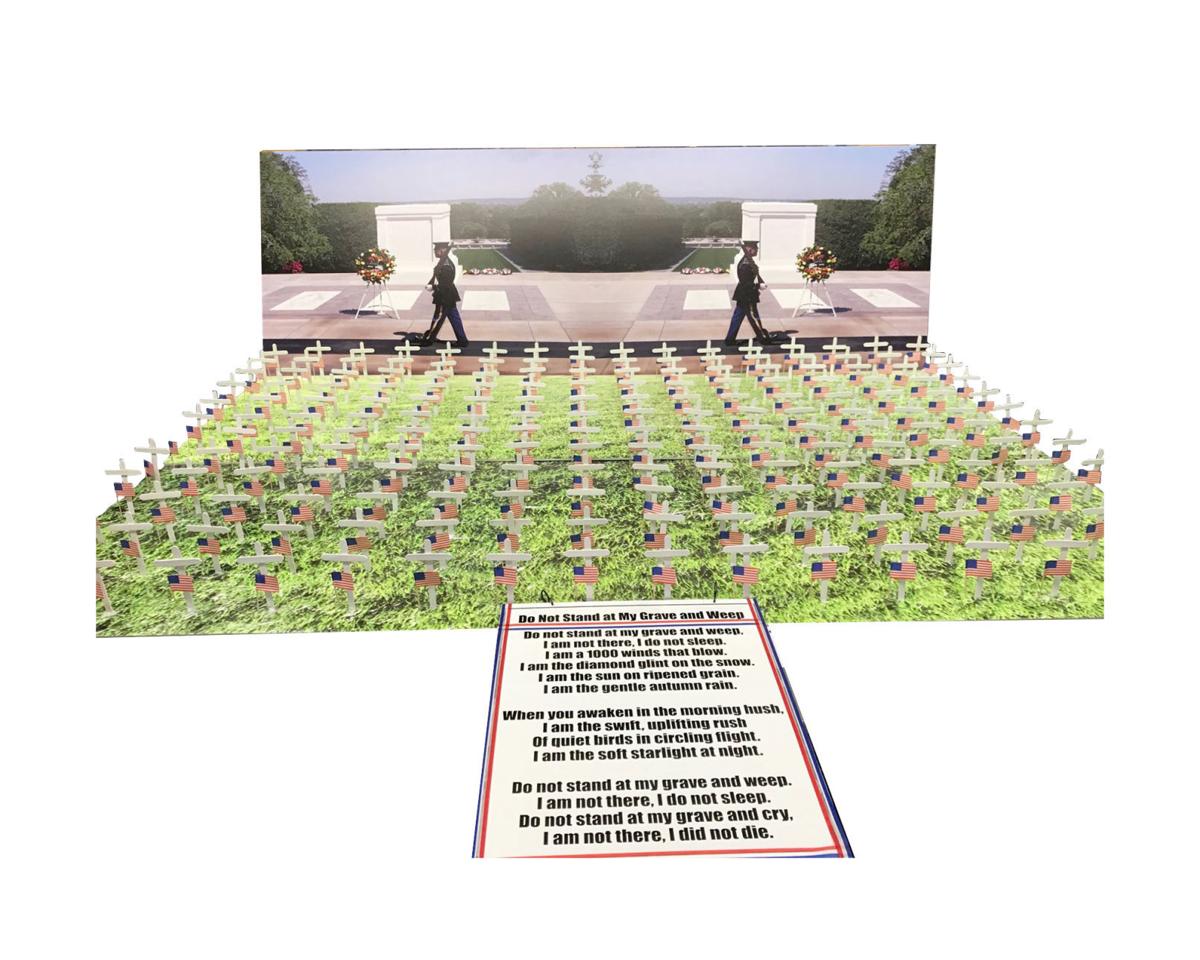 Vietnam veteran José Caraballo of Waterloo made a miniature version of Arlington National Cemetery, which was on display Wednesday during the annual veterans dinner and concert at Waterloo High School. At right is Dan Hacker, the school’s band director.

WATERLOO — After creating a display for the New York State Senate Veterans Hall of Fame, José Caraballo figured he was done with military tributes for the year.

“I was not going to do anything for Veterans Day, but I later said to myself, ‘Wait a minute.’ I wanted to say thank you to my sisters and brothers in combat,” said Caraballo, a Vietnam veteran and longtime Waterloo resident. “So, I started thinking of ideas.”

That idea turned into a miniature version of Arlington National Cemetery, which was on display last Wednesday night during the annual veterans dinner and concert at Waterloo High School.

“I am using this for educational purposes,” Caraballo said. “The kids don’t realize how important this is for us.”

Caraballo worked with Dan Hacker, the school’s band director, to set up the display outside the high school auditorium.

“José has been a big supporter of the music department here for a very long time, and he knows we have this dinner and concert for our veterans every year,” Hacker said. “He wanted to bring his display, and I thought it was a great idea.”

Caraballo, who was nominated for the state Senate Veterans Hall of Fame last year, took the Arlington display to the state fairgrounds in suburban Syracuse Friday for the annual Central New York Veterans Parade and Expo, which was held over the weekend. Following that event he toted it to the Seneca Falls Walmart, where it will be on display until Nov. 16.

The display, which measures about 6 feet by 6 feet, includes 200 crosses made of Popsicle sticks and tiny American flags near each. It took Caraballo about three months to put it together at his home.

“I am surprised I am not divorced yet,” he said with a smile. “I built this in one of my bedrooms. I had to plot every little cross at the same distance apart, and it was a headache ... but I look at this with pride. I want to share this with the community.”

Caraballo said he had help from several local businesses, including Pilat Graphic Design on Route 414. Owner Dan Pilat helped Caraballo plot the distance between the crosses and got him a background poster showing guards at the Tomb of the Unknown Soldier.

“He surprised me with that. That was awesome,” Caraballo said of the poster, noting the Copy Shop in Seneca Falls helped him get the tiny flags.

Caraballo had to cut the display into three 2-by-6-foot pieces to get them into his SUV and to the high school.

Hacker noted that the school’s veterans dinner and concert, which has been held for at least the last 10 years, is the most attended school concert of the season.

“The kids serve pasta and talk to the veterans. It’s a pretty cool event,” he said. “There are vocal and instrumental performances by middle school and high school students, and they are all patriotic songs. We can fit about 750 people in the auditorium and we usually fill all the seats and have kids standing in the back.”

The Arlington display at the school also included the American flag, the flag from each branch of the Armed Forces, the Prisoner of War flag, and the Vietnam War flag.

Caraballo, who served on an amphibious supply boat in Vietnam and later rejoined the military later before retiring after a 22-year Army career, is active in local American Legion and Veterans of Foreign War posts. He encourages people to check out the display during a week-long run at the Seneca Falls Walmart.

“I really wanted to share this with the community and educate people,” he said. “By me taking this out and displaying it to the community, it gives me great satisfaction.”