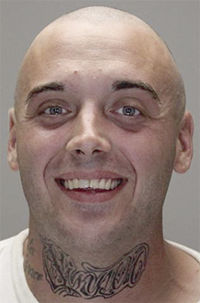 CANANDAIGUA — A Lyons man who posted taunting videos on social media before robbing a Phelps convenience store last September will be going to prison.

Burgess is scheduled to be sentenced Feb. 19 by Judge Craig Doran to five years in prison followed by five years of parole.

The charges are related to the Sept. 17 robbery of the 7-Eleven off Route 14 in Phelps, near Thruway exit 42. Police said at about 3:30 a.m. that day, Burgess displayed what appeared to be an assault-style rifle and got away with an undisclosed amount of cash and cigarettes. Authorities later said Burgess used an Airsoft gun that looked like a rifle.

Burgess fled in a vehicle he previously stole from a Phelps business, Halco Energy. The abandoned vehicle was found later that morning on Pre-Emption Street in the town of Waterloo, prompting a roughly 30-hour manhunt involving numerous police agencies. During that time, Rochester TV stations played videos that Burgess posted to social media sites, saying something bad was going to happen and he could not be caught by police.

The following day, police received a tip that Burgess was in a vehicle later spotted by a Seneca Falls police officer off Route 89. Police said Burgess tried to run away but was caught by officers from several agencies, including a K-9 unit.

Burgess remained vocal after his arrest, telling people to “keep watching the show” and “someone needs to monetize this.”

Doran approved a mental health evaluation for Burgess about a month after the arrest. He was deemed mentally competent to stand trial.

Burgess admitted to two robbery counts, one for stealing the money and cigarettes from the 7-Eleven. The other was for taking the store clerk’s cell phone.

Burgess faced two tampering charges: one for hiding and trying to burn the truck on Pre-Emption Street, the other for removing two SIM cards from cell phones, his and the clerk’s, to avoid apprehension and detection while he was on the run.

He was charged with criminal mischief for damaging the clerk’s phone.

Ritts said Burgess’ mental state at the time of his arrest, the fact that no one was hurt, and the suspect using a fake gun factored into the plea negotiations and five-year sentence. Ritts noted that two clerks in the store at the time of the robbery will not have to testify at a trial.

“Could he have gotten more time and deserved more? Yes,” Ritts said. “Now two young kids don’t have to be in the room with him.”

Doran remanded Burgess to the Ontario County Jail without bail until he is sentenced.