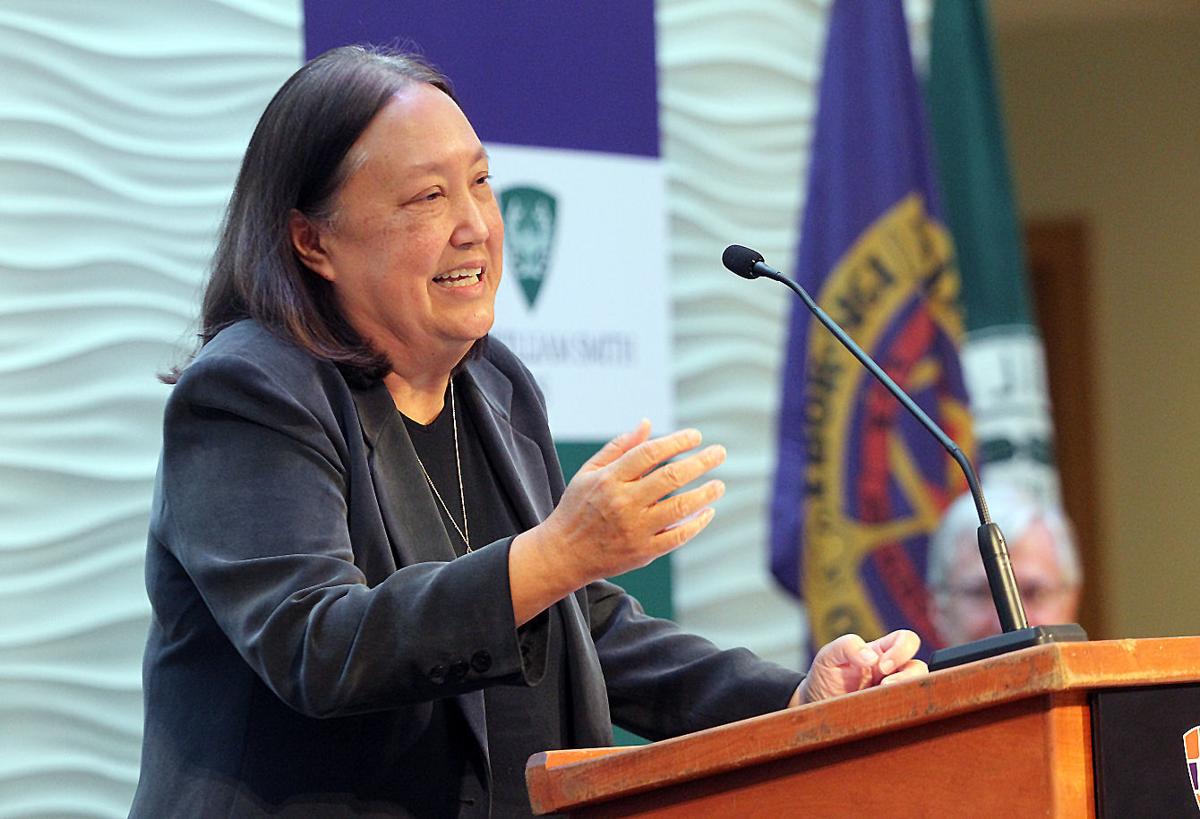 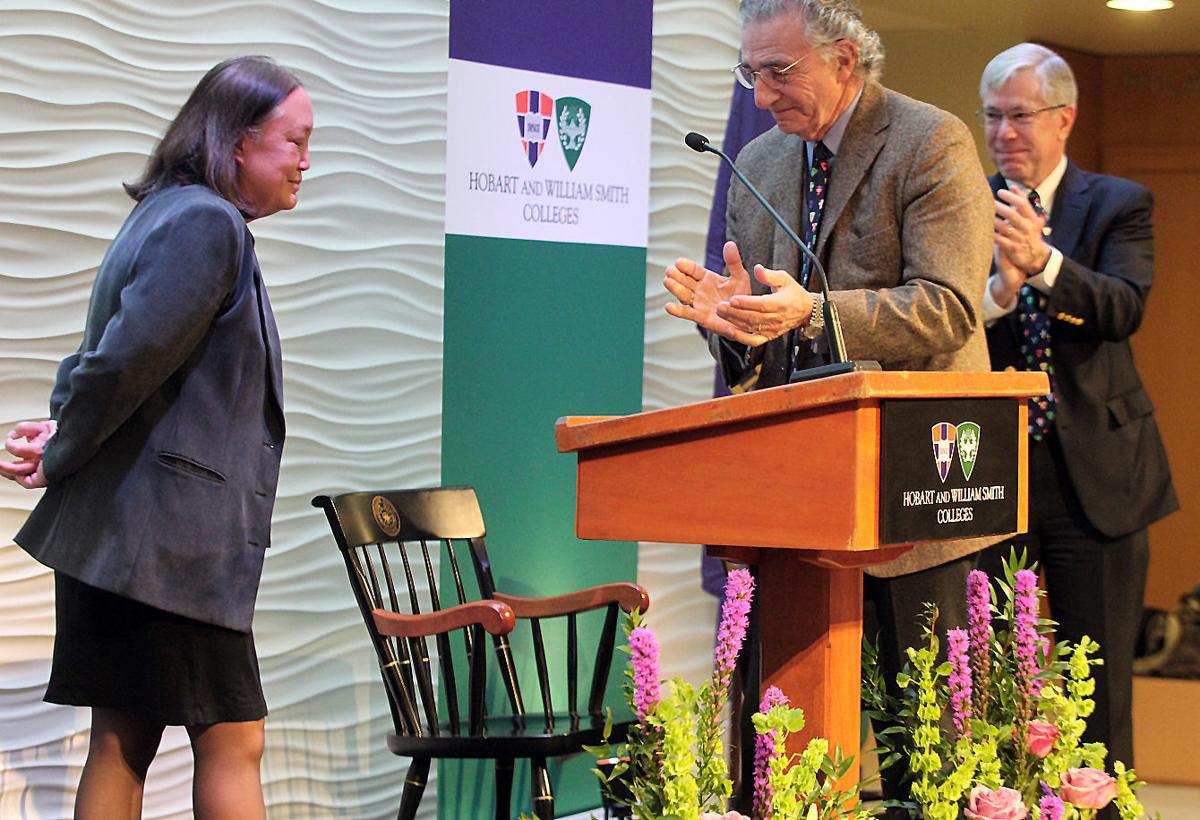 Joyce Jacobsen, newly announced president of Hobart and William Smith Colleges, makes her way to the podium at the Gearan Center for Performing Arts on Friday, Feb. 8, 2019. She is being applauded by Board of Trustees President Tom Bozzuto (center) and presidential search co-chair Andy McMaster. 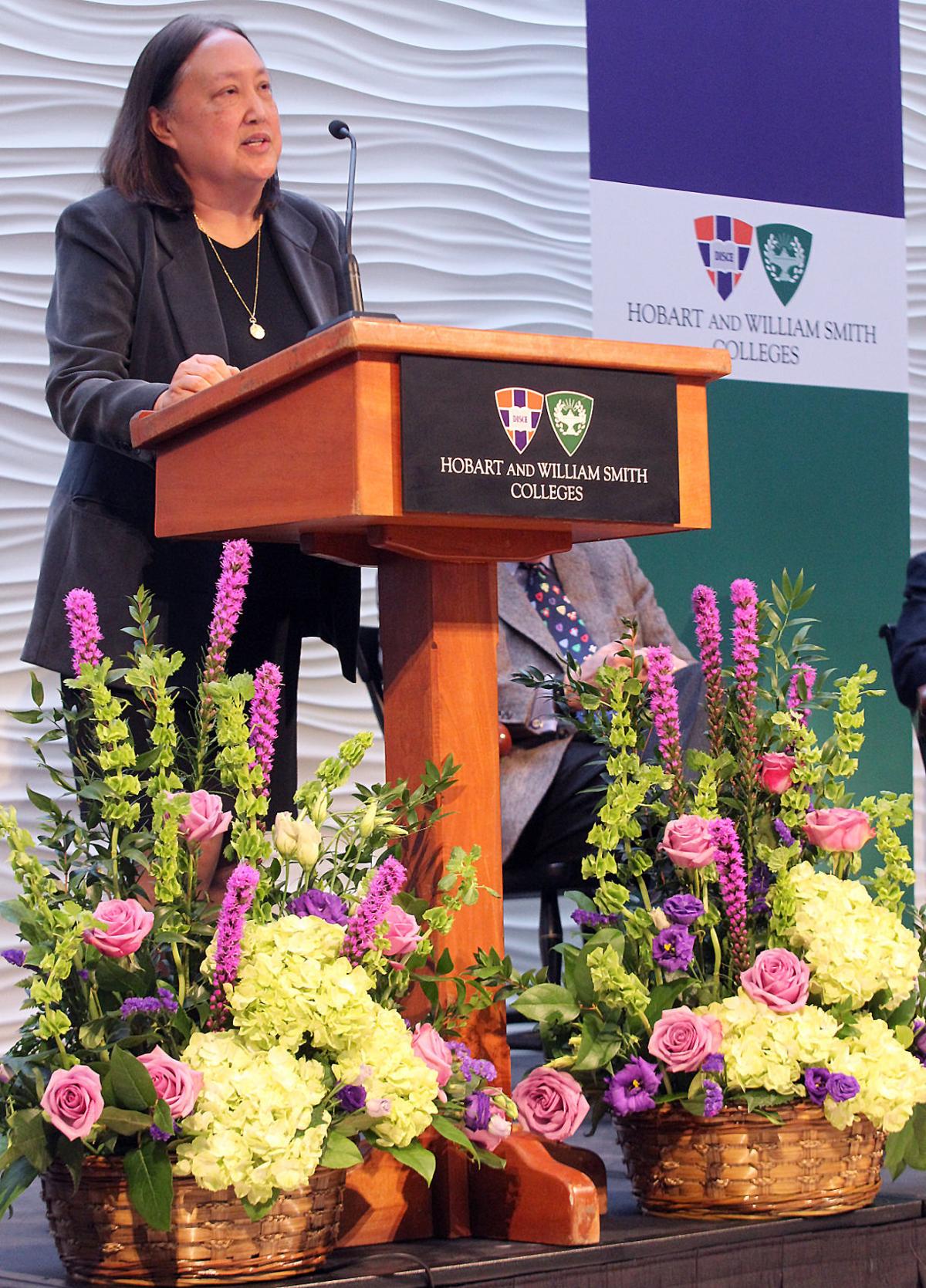 Joyce Jacobsen, newly announced president of Hobart and William Smith Colleges, speaks to the crowd that gathered Friday at the Gearan Center for the Performing Arts to learn who the Colleges’ new leader would be.

Joyce Jacobsen, newly announced president of Hobart and William Smith Colleges, makes her way to the podium at the Gearan Center for Performing Arts on Friday, Feb. 8, 2019. She is being applauded by Board of Trustees President Tom Bozzuto (center) and presidential search co-chair Andy McMaster.

Joyce Jacobsen, newly announced president of Hobart and William Smith Colleges, speaks to the crowd that gathered Friday at the Gearan Center for the Performing Arts to learn who the Colleges’ new leader would be.

GENEVA — Joyce Jacobsen has been on a lot of college campuses over the course of more than three decades in higher education, but doesn’t think she’s ever seen a backdrop like the one Hobart and William Smith Colleges offers.

“It’s a lovely setting on the lake,” said Jacobsen in an exclusive interview with the Finger Lakes Times. “It’s just beautiful.”

She’ll get to know that view well as the next president of HWS. The Colleges announced her appointment on Friday afternoon in a packed house at the Gearan Center for the Performing Arts. She will become the first female president in the Colleges’ history.

She told the Finger Lakes Times: “I’m really excited about it (being the first female president). I’m very cognizant.”

Jacobsen received the unanimous recommendation of the Presidential Search Committee and the full board of trustees, said Bozzuto, who introduced Jacobsen to an audience that included faculty, staff, students and community members.

“President Jacobsen is a prominent scholar and an esteemed educator with a deep understanding of the interdisciplinary inquiry so vital to our mission here at Hobart and William Smith,” said Bozzuto in a prepared statement. “In her work with students and colleagues in the academy, and with preeminent national and international organizations, she has distinguished herself as a remarkable leader with the experience, values and vision to pilot the Colleges to new heights.”

Bozzuto said Wesleyan is “one of the best liberal arts colleges in the country,” and that Jacobsen has won “the respect and admiration of her peers around the world.”

He called her a “person of integrity, a person of compassion and humor,” as well as “eminently knowledgeable and capable (with a) vision, fortitude and character to lead Hobart and William Smith to a new level of excellence.”

Jacobsen said she is well aware of the region’s important role in women’s history, pointing to Seneca Falls, the birthplace of the suffrage movement in the U.S., and of the history made in Geneva by Elizabeth Blackwell, the first woman to receive a medical degree in the United States at Geneva Medical College, a precursor to Hobart.

“She was a personal hero of mine growing up,” she said.

Jacobsen pointed this out in her remarks Friday at the Gearan Center, where she recalled reading a biography on Blackwell as a child in Nevada.

HWS said Jacobsen, who will assume her new job July 1, is a “renowned scholar of economics, an award-winning teacher and an experienced administrator.” She has degrees from Harvard, The London School of Economics and Stanford University. HWS said she has more than three decades of experience “taking on increasingly complex roles in higher education.”

Jacobsen said her father and mother both worked in academia, and that she has spent the better part of her life on the college campus or on trips related to academic research.

As Wesleyan’s provost and senior vice president for academic affairs, Jacobsen oversees the entire academic enterprise — including athletics, institutional research and community partnerships. At Wesleyan, said HWS, “she has been a thoughtful contributor to student affairs and equity and inclusion, while also helping to create fundraising and stewardship plans and collaborating on admissions and enrollment strategies.”

‘This one caught my eye’

After 25 years at Wesleyan, where she moved from the ranks of professor to administration, Jacobsen said she began thinking about a college leadership role. And then the HWS job opened up.

“I did know they were looking,” she said. “I was looking very selectively. This one caught my eye.”

Jacobsen said she was a bit familiar with the area, as she and her husband, Bill Boyd, a visiting scholar in the Quantitative Analysis Center at Wesleyan, had stayed on Seneca Lake recently with friends and had come away impressed with the region’s quality of life — from the food, wine and craft beverage scene — to hiking and biking.

HWS, she said, seemed like a good fit. Like Wesleyan, it is a liberal arts school, with what she believes is an outsized impact.

“I knew it had a great reputation, very similar to Wesleyan,” she said.

Jacobsen loves the school’s philosophy of helping students “lead lives of consequence,” which she interprets as an education focused on developing the whole person.

“I think that is a great mission,” she said.

Jacobsen doesn’t sense a need for wholesale changes at HWS, and emphasized that her primary role coming in is to learn about the HWS community — staff and students alike.

“It’s most important to be really listening and talking to people on campus from top to bottom” in order to make intelligent choices for the Colleges, she said.

Jacobsen said she is well aware of the controversial departure in April last year of former president Greg Vincent, a HWS graduate who resigned amid allegations of plagiarism related to a dissertation he wrote at the University of Pennsylvania. Patrick McGuire has served as interim president since Vincent’s departure.

She said HWS is probably still recovering from those difficult days.

“I think the foundations are (still) there, but it (the controversy) was a little blow to morale,” said Jacobsen. “It was a challenging event, and I think we’ll be working through that for a while.”

James Spates, professor emeritus at HWS, thinks Jacobsen has the qualities needed to steer the Colleges out of those rough waters and loves that the trustees chose a woman.

“It’s a momentous day for the Colleges,” he said. “The first woman president with such great credentials. We’re at a critical juncture in our lives with the Colleges. I’m delighted.”

So are some of the HWS students who were on hand for the announcement.

“I’m really excited that we have a woman president,” said Grace Ruble, a second-year student from Texas. “I think it’s really cool.”

She believes Jacobsen will provide “an interesting perspective on gender.”

Her roommate, Gizem Hussain of Pakistan, said she is “super excited to have a woman president. She seems extremely passionate ... I’m really looking forward to seeing what she brings to the campus, because I think it’s going to be really great.”

Geneva resident Jen Harris, who works at the Colleges and has two sons attending, loved that Jacobsen became emotional when talking about her new job.

And yes, Harris also liked that HWS will have a female leader.

“I’m excited,” she said. “The future is females. I think she’s going to be a great addition.”

“I definitely think anytime the trust is broken, it takes time to rebuild,” she said.

Jacobsen’s current employers at Wesleyan said she will be missed.

“Joyce Jacobsen has made myriad contributions to Wesleyan University as a teacher, scholar, colleague, faculty leader and, for the last several years, as provost,” said Wesleyan University President Michael Roth. “Our university has benefited immeasurably from her many years of innovative thinking and caring practice, and I have every confidence that she will bring these qualities to her new position as president of Hobart and William Smith.”

The presidential search — led by committee co-chairs and vice chairs of the HWS Board of Trustees Cynthia Gelsthorpe Fish and Andy McMaster — began in June of 2018. The Colleges consulted with the Chicago-based executive search firm of Isaacson, Miller, which helped identify candidates and coordinate the process that led to Jacobsen’s selection.

An expert on labor economics, particularly the economics of gender, Jacobsen is the author of scores of journal articles, book chapters and book reviews exploring sex segregation, migration and the effects of labor force intermittency on women’s earnings, as well as the economics of wine and other collectibles. Her books include “The Economics of Gender,” “Queer Economics: A Reader” (co-edited with her former student, Adam Zeller, who started the project as a senior essay) and the textbook “Labor Markets and Employment Relationships” (with Gilbert L. Skillman).

She thinks her economics background, combined with a lifelong career in academia, helps her see higher education holistically — from the efforts to provide students with a breadth of educational opportunities and professors the ability to balance research and teaching — while understanding the need to do so with available resources.

“Economists from birth are trained to think that way,” she said.

Joyce Jacobsen earned her Ph.D. from Stanford University and M.Sc. from the London School of Economics and graduated from Harvard University, magna cum laude, with her A.B. in economics as a member of Phi Beta Kappa. She began her academic career in 1988 as an assistant professor at Rhodes College before coming to Wesleyan University in 1993. She earned full professor at Wesleyan in 2000, and was awarded an endowed chair as Andrews Professor of Economics in 2003. She was the recipient of the university’s prestigious Binswanger Prize for Excellence in Teaching in 2007. She began her work as an administrator in 2013 when she was appointed dean of social sciences and director of global initiatives at Wesleyan, and then provost and vice president for academic affairs in 2015.

Jacobsen has been a visiting professor at Colorado College and the University of Groningen in the Netherlands, where she held the Jantina Tammes chair in Gender Studies. She has consulted for the World Bank, the ACLU and other nonprofit organizations. She served as editor of Eastern Economic Journal (2005-10) and on the editorial boards of a number of professional journals. Jacobsen was president of the International Association for Feminist Economics from 2016-17, served as a member of the American Economic Association Committee on the Status of Women in the Economics Profession, and is currently an elected board member of the Eastern Economic Association. During the past 20 years, she has been a member of several projects and working groups for the Institute for Women’s Policy Research.

Jacobsen is married to Bill Boyd, visiting scholar in the Quantitative Analysis Center at Wesleyan, who holds a Ph.D. in mathematics from the University of Tennessee, Knoxville, an M.S. in computer science from the University of Memphis, and a B.S. in physics from Rhodes College. Jacobsen and Boyd have two grown children, Catherine Boyd and Kenneth Boyd. Jacobsen has two grown stepchildren, Will Boyd and Kara Boyd Nunn; and five step-grandchildren. Originally from Reno, Nevada, Jacobsen is the only child of William Jacobsen, Professor Emeritus of English at University of Nevada, Reno, an expert on North American Indian languages, including Makah, Salinan and Washoe, and Virginia Chan, an academic administrator who worked for the Basque Studies program at the University of Nevada, Reno.