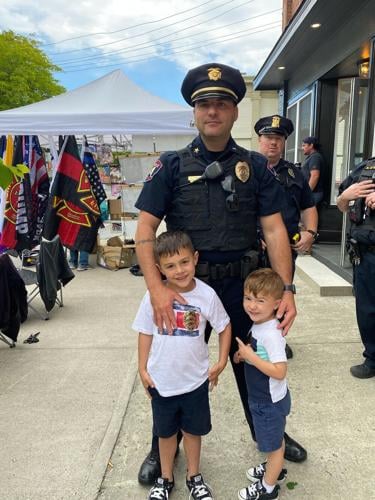 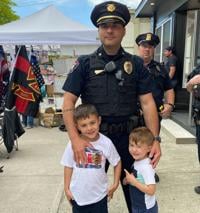 New Palmyra Police Chief Kyle DiNardo with his sons, Aiden (left) and Easton, on the streets of Interlaken, where he serves as part-time police chief. 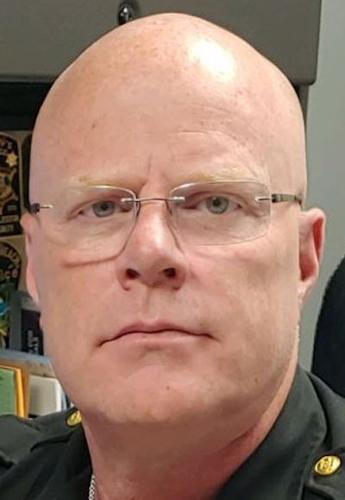 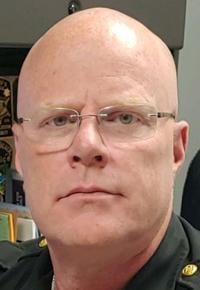 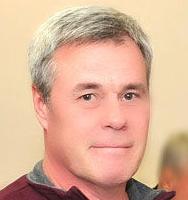 PALMYRA — Kyle DiNardo was perfectly happy working as a school resource officer in Lyons for the Wayne County sheriff’s office, where he’d been employed for three years after stints at a number of other departments.

However, as the acting police chief of the Interlaken Police Department in Seneca County — a part-time job he’s held for four years — he needed to take the civil service test to hold the job permanently.

“I had no preconceived notions to leave the sheriff’s office,” DiNardo said.

However, after the exam, Newark and Palmyra, both in need of new police chiefs, came calling.

He interviewed for both jobs. He didn’t get the Newark chief position, but Palmyra offered him the job and he took it.

“I talked to the (Village Board), and our visions (on policing) coincided,” he said. “I had no issues with the sheriff’s department.”

His former boss, Sheriff Rob Milby, has no issues with DiNardo, who started with Palmyra Oct. 24. In fact, he thinks Palmyra made a wise choice.

“Kyle DiNardo is a well-rounded police officer,” Milby said. “He is one of those rare individuals that can strike an instant rapport with anyone he meets. Chief DiNardo is hard to keep up with, as he is always taking care of either the task at hand, or the one he anticipates is coming up! He knows that value of our children, and put 120% into being an SRO. I witnessed him going above and beyond as an SRO, and it did not go unnoticed. The kids appreciated him, the staff appreciated him, and we appreciated him for the work he did, as well as the person that he is.

“He goes above and beyond in everything he does, and that is why he was selected as chief. He was a valuable asset to the sheriff’s office while he was in our uniform. His work here will have long-lasting effects. He earned the respect of our members, and will do the same as chief in Palmyra. We all look forward to working with him.”

DiNardo said the SRO job served as great preparation for his new position.

“It’s that bond you develop and the relationships that are built,” he said. “The trust is the main issue. That’s the same thing we do with village policing.”

DiNardo said he wants his officers to connect with the community — from a greater presence in schools to forging relationships with the village’s 3,300 residents.

“I want them to know people,” he said. “We work for them. We’re your police officers.”

“The Palmyra Village Board and myself are looking forward to working with Chief DiNardo,” Husk said. “He will no doubt bring back respect and integrity to our department and great community policing. He will be a great fit, along with our current officers, to serve and protect our residents. Chief DiNardo will also welcome residents to reach out to him. He undoubtedly will be a great fit here in Palmyra. His knowledge is refreshing.”

Palmyra has been without a chief since the departure of David Smith earlier this year, and DiNardo admits there is some work to be done on department morale.

The police clerk, Patty Burditt — she is also a peace officer and village court officer — filed a complaint in January against Smith and the village with the state Division of Human Rights. She alleged a hostile work environment under the former chief; Smith has denied the allegations.

The village said in documents that it was unaware of the allegations and “does not condone” such conduct.

The status of the case was not available as of Wednesday.

DiNardo, who has an associate degree in criminal justice from Finger Lakes Community College, a bachelor’s from SUNY Cortland, and is working on his master’s in public administration, said he could not speak about the case. However, he hopes to set a new tone within the department and in the village he now serves.

“My main goal is to get the community policing back,” he said, noting that he and his family are invested in the Palmyra-Macedon community: His wife is opening a daycare in the former MacKenzie’s gift shop, which happens to be next door to Village Hall on Main Street, where the police department is headquartered.

“We will be hiring more part-timers,” he said, adding that he’s also hoping to add another full-time officer.

As for the Interlaken chief job, he’s going to keep it, saying it’s largely work he can do remotely.