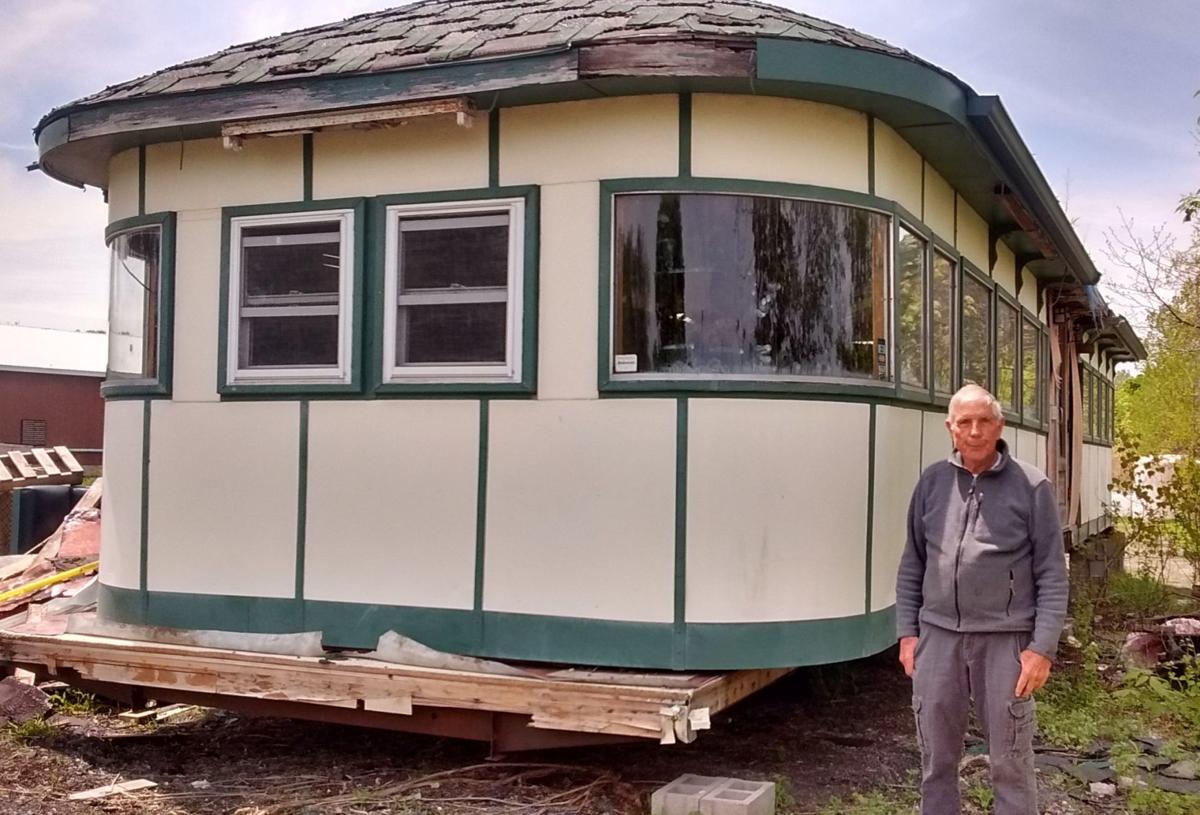 Seneca County resident Gerry Collins plans to transport the old Patti’s Lakeview Diner, which once sat on Lake Street in Geneva, from its current spot at the city’s wastewater treatment plant to his home in Covert, in southern Seneca County. There, he plans to restore it. 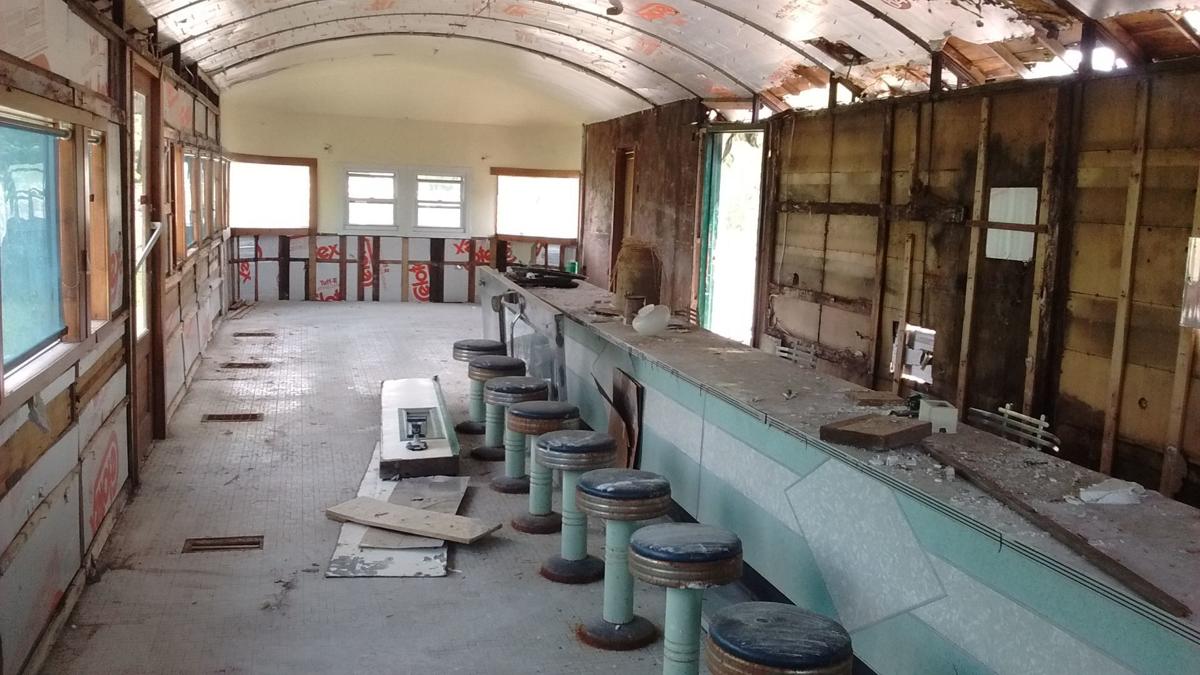 Gerry Collins has been stripping the inside of the old diner over the past year. The counter and stools are staying, he said. 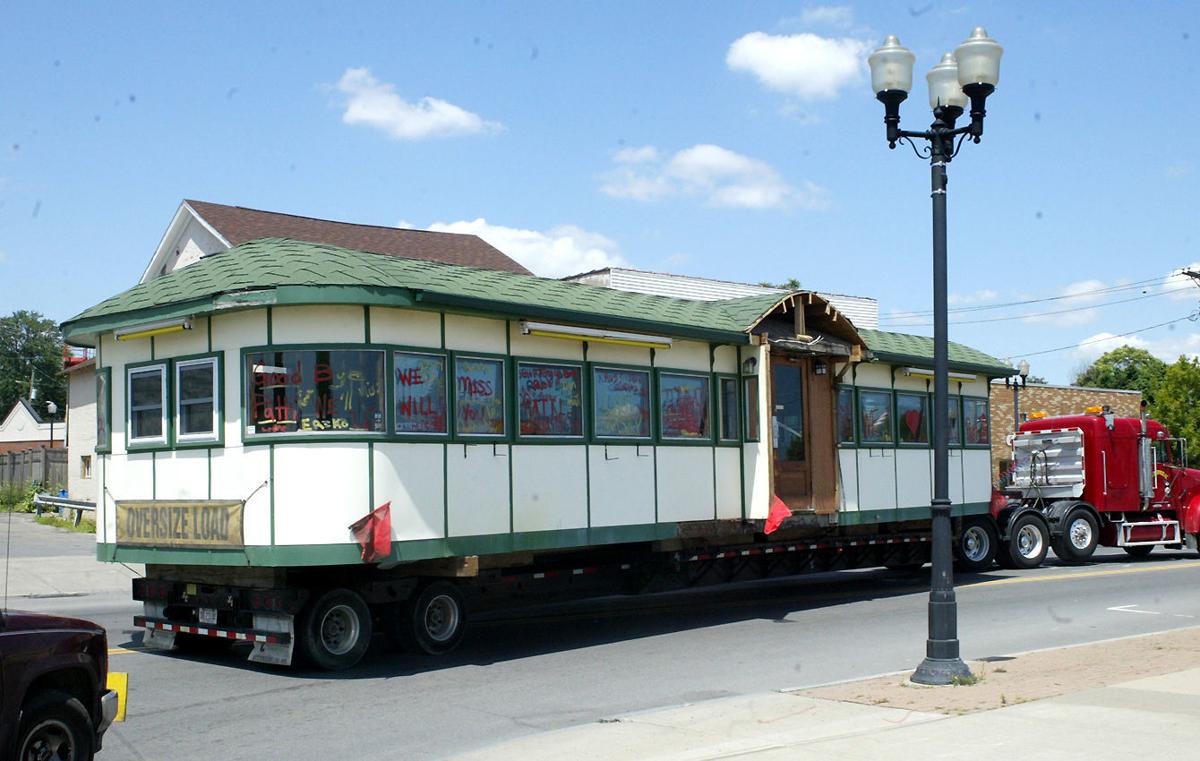 The former Patti’s Lakeview Diner was lifted and moved from Lake Street in Geneva across town to near the former transfer station on Doran Avenue. The diner makes its way north on Exchange Street across the railroad tracks on June 24, 2004.

Seneca County resident Gerry Collins plans to transport the old Patti’s Lakeview Diner, which once sat on Lake Street in Geneva, from its current spot at the city’s wastewater treatment plant to his home in Covert, in southern Seneca County. There, he plans to restore it.

Gerry Collins has been stripping the inside of the old diner over the past year. The counter and stools are staying, he said.

The former Patti’s Lakeview Diner was lifted and moved from Lake Street in Geneva across town to near the former transfer station on Doran Avenue. The diner makes its way north on Exchange Street across the railroad tracks on June 24, 2004.

GENEVA — Those who stopped into the old Patti’s Lakeview Diner were treated to not only good eats made from scratch but also a side of the restaurant’s operator, Patti Guererri, whose big personality made the visit complete.

Guererri didn’t want to shut down the restaurant on Lake Street. She was forced to do so.

The city wanted the land for the construction of the Hampton Inn and used eminent domain proceedings to take it. She was offered a spot at what is now Bicentennial Park. It turned out to be cost-prohibitive for the city, said Guererri, so the diner was done.

“It (the diner) was my heart and soul,” said Guererri, who still works in the restaurant business. “I loved it.”

The diner’s future wasn’t much clearer. The city hired a contractor to take it away, parking it in a scraggly lot near the city’s wastewater treatment plant property. It’s been there ever since.

Enter Gerry Collins. Come next month, if his plan works out, the diner will have a new home.

The Covert, Seneca County, resident, who operates a three-seat hot dog stand in Watkins Glen and who spent most of his working life in the restaurant industry, plans to have it hauled back to his home. There, he will restore the venerable diner. He expects it will take most of a year to do the work, most of which he plans to do himself.

“It was an institution for decades,” said Collins. “I actually had been here a couple of times before it closed. It was a very famous place in Geneva.”

The restaurant dates back to either 1932 or 1933, depending on who you talk to, and was originally called the Texaco Diner as a complimentary restaurant offering with the next-door Texaco gas station, now the Lake Street Station Winery. It was on Routes 5&20, the main east-west highway in upstate before the New York State Thruway was built in the 1950s.

The diner is the product of an Ohio company called Bixler, said Guererri, who took it over in 1997.

“There were only 16 built,” she said, guessing that there are only about two still in operation. One, she said, is still feeding folks in Auburn.

While the Bixler-built diner in Auburn lives on, the Geneva one has served in purgatory at the city’s sewage treatment plant with a dim future, considering its many years exposed to the elements.

Collins was searching for diners and learned of the whereabouts of the former Lakeside Diner, which is 48 feet long and 14 feet wide. About a year ago he offered the city $100. They took it.

“They (the city) had a soft spot in their hearts for it,” said Collins.

“The city was not actively marketing the diner but has always been open to selling it, as we have no use for it,” Blowers said. “We are excited that Gerry can get some good out of the diner and use it for its original intent.”

Collins — a Connecticut native who came to the area with his wife in 2000 to run a Trumansburg bed-and-breakfast — has been coming up over the past year to gut the interior in preparation for restoration.

The counter and its stools — which Guererri said came from a Geneva restaurant that closed — are staying, Collins said. He plans to fill the diner with period equipment and furniture he has collected over the years.

“I’m in the food business,” he said. “I’ve got everything I need. It’s all sitting in a barn.”

Once finished with his restoration, Collins hopes to either place the diner in Watkins Glen or sell it. He and Guererri say there is great demand for vintage diners because so few have survived.

One in Newark was purchased several years ago by a Buffalo developer, who hauled it away to the Queen City, restored it and renamed it the Swan Street Diner. Collins said that if he’s successful in placing it in downtown Watkins Glen, it will be renamed the Grand Prix Diner, in homage to the village’s auto racing history.

“I am very happy that he is trying to save the diner,” Perry said. “It was sad to watch it deteriorate over the years, and I am glad someone stepped up to try to save it. I wish it was staying in Geneva, but at least we would be able to go to it again if everything works out and he is able to put it in downtown Watkins Glen.”

Guererri said she doesn’t dwell on what she considers the city’s shabby treatment of her business and is pleased with Collins’ restoration plans.

“I wish him the best,” said Guererri, adding that she hasn’t looked at the diner in years. “I hope that he can do what he plans on doing.”

Collins said his wife, Eileen, “thinks I’m nuts” for taking on such a project at age 78.

“I’ve reached my goal when it sits in my backyard and away from the wrecking ball,” he said. “Everything else is frosting on the cake.”