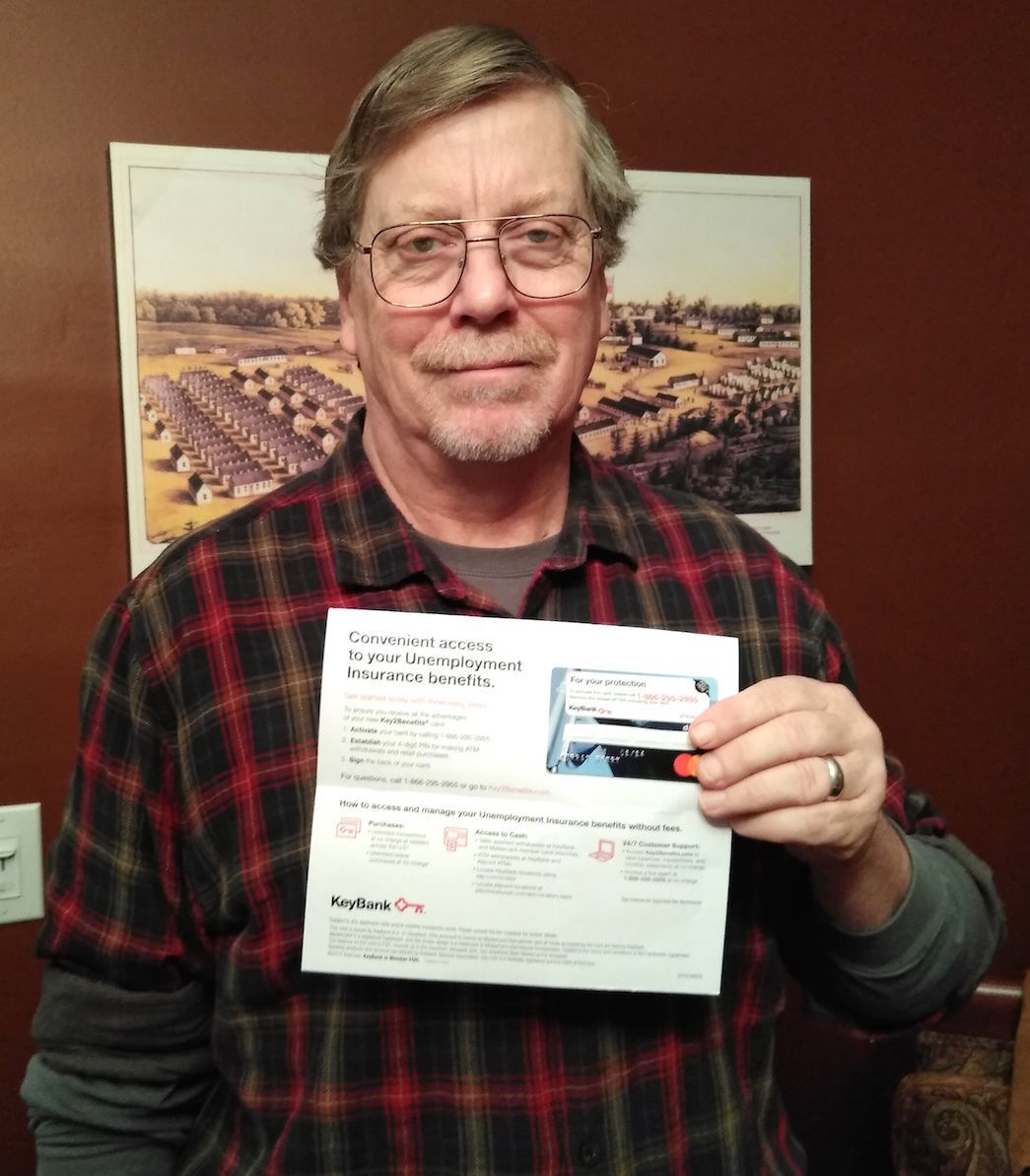 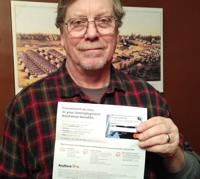 Murray Henry of Canandaigua holds the unemployment benefits debit card he received but never applied for.

CANANDAIGUA — Murray Henry has been retired from his job as director of the Ontario County 911 Center for 10 years, while his friend Mike Northrup is the county’s longtime Republican election commissioner.

Neither is unemployed, but that hasn’t stopped the state from sending them money.

Henry and Northrup said they are among several they know of that have received unemployment benefits they never applied for, the result of what likely is a case of fraud.

The Canandaigua residents said they had received letters from the state Department of Labor telling them they had qualified for unemployment benefits they requested. However, they didn’t request them.

“I’ve never been on unemployment, never been unemployed,” said Henry, who noted that he reported the issue on a fraud link on the Department of Labor’s website. “I posted on Facebook, and four of my friends said the same thing happened to them.”

He said he emailed the labor office to tell them what happened. A representative then called to say the issue had been referred to law enforcement.

However, days later, the labor department sent him a debit card containing his unemployment benefits, stating it was unable to make an electronic deposit for the benefits because the agency didn’t have bank account information.

The same thing happened to Northrup.

“It’s a scam somewhere,” said Henry. “Somewhere, somebody applied (in his name). They (DOL) should have put the brakes on this (sending the debit card).”

“I am worried about my finances and I shouldn’t have to,” said Henry, who also informed state Sen. Pam Helming’s office about the matter.

“There’s a big problem going on at the labor department,” he said.

Northrup said he’s not as worried about unscrupulous hackers as Henry, explaining his online activity is limited and that he only shops on Amazon and with a well-protected password.

While Henry contacted the labor office, Northrup reached out to Ontario County’s Human Resources Department to tell them what happened.

He later got a letter from the Department of Labor that said, “It appears someone may have applied for benefits in your name.”

When contacted by The Finger Lakes Times this week, a Department of Labor spokesperson would only say that “unemployment insurance fraud has become a serious problem during the pandemic.”

What puzzles Henry and Northrup is that if it was fraud, why did they get the money?

The labor department said earlier this month that it had stopped fraudsters from stealing more than $5.5 billion in benefits, while paying out over $65 billion to over 4 million New Yorkers — or 30 typical years’ worth of benefits paid — in just 11 months.

Department of Labor Commissioner Roberta Reardon said the agency has identified over 425,000 fraudulent claims, and that the agency “has referred hundreds of thousands of fraud cases to federal prosecutors and continues to work with law enforcement partners on the federal, state, and local level to hold fraudsters accountable. ...These benefits have been a lifeline for millions of New Yorkers over the last year, and every day our Office of Special Investigations is working to protect our system from fraud and abuse.”

The agency said criminals are using real New Yorkers’ identities likely stolen during previous data breaches involving institutions such as banks, insurance companies and major employers — to file fraudulent claims and illegally collect benefits in the name of individuals who are not unemployed.

How to protect yourself

The state Department of Labor said anyone who receives a monetary determination letter from the Department of Labor, but did not apply for unemployment benefits should immediately report it to the DOL at on.ny.gov/uifraud.  In addition, these New Yorkers should take steps to proactively protect themselves, including those listed at IdentityTheft.gov, such as:

• Placing a free fraud alert on their accounts with the three credit bureaus (Experian, TransUnion and Equifax);

• Reporting the identity theft to the FTC;

• Filing a report with their local police department, if they wish; and

LEGAL NOTICE Turnpike Grinder LLC, with the assumed name of