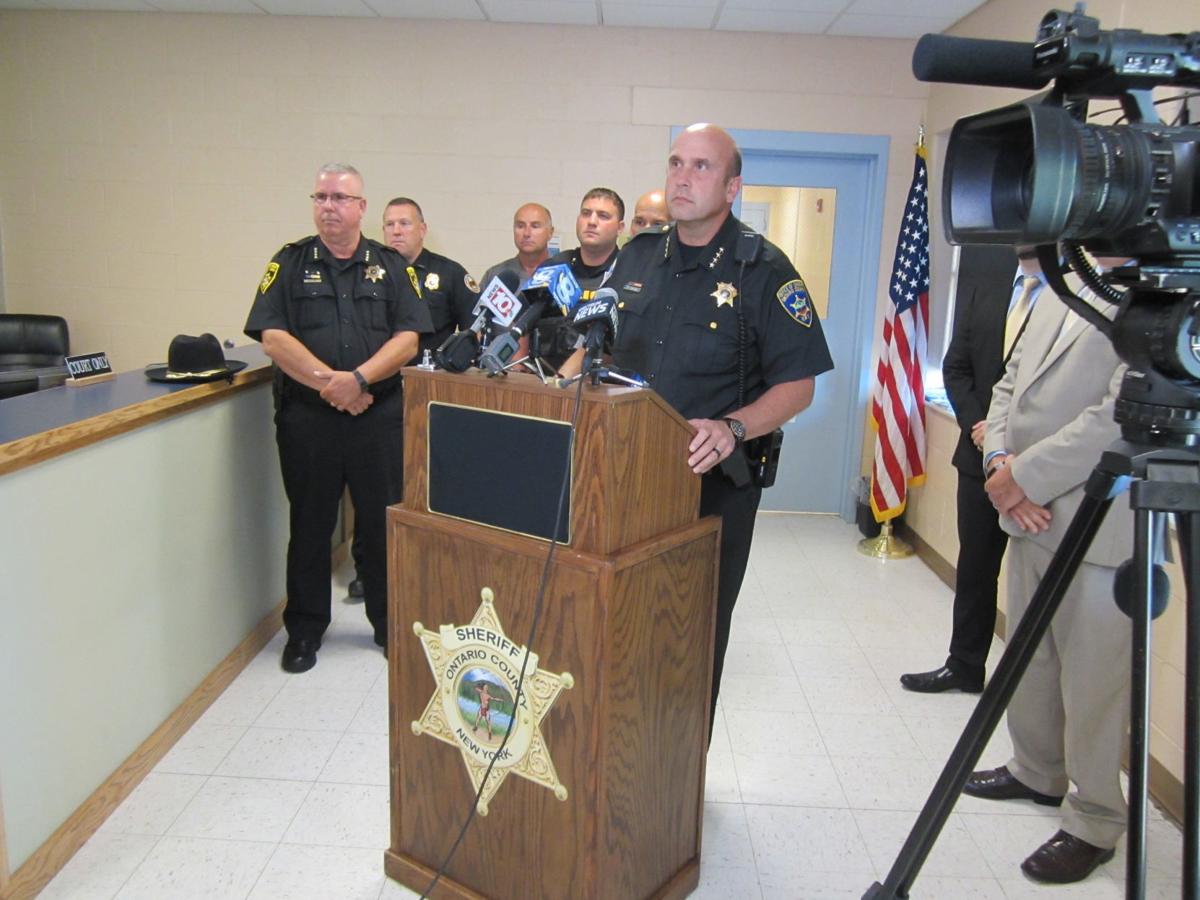 HOPEWELL — Shortly before he allegedly robbed a convenience store in Phelps, Brandon Burgess posted videos to social media sites saying something bad was going to happen and he could not be caught.

Hours after he was caught, Burgess remained vocal after being arraigned on two felony charges Wednesday night at the Ontario County Jail.

“Keep watching the show,” Burgess said to his family as he was being led back to jail. “Someone needs to monetize this.”

Burgess, who was captured Wednesday morning in Seneca Falls after an intense manhunt that spanned three counties, was charged by the Ontario County Sheriff’s Office with second-degree robbery and third-degree grand larceny. Assistant Public Defender Matthew Mix, who represented Burgess at the arraignment, pleaded not guilty on his behalf.

The 28-year-old Lyons resident is accused of robbing the 7-Eleven in Phelps, near exit 42 of the state Thruway, at approximately 3:30 a.m. Tuesday. No one was hurt, although police said Burgess brandished a gun that appeared to be an assault-style rifle, but what authorities now believe was an Airsoft gun.

Police said Burgess got away with an undisclosed amount of cash and cigarettes, and fled in a vehicle that was stolen in Phelps earlier that day. The damaged vehicle was found later near Pre-Emption Street in Phelps, prompting a heavy police response in that area.

Ontario County Sheriff Kevin Henderson said police believed Burgess was in a wooded area, and a state police helicopter was brought in to see if he could be spotted from the air. However, Burgess was not found that day or night.

During a press conference Wednesday, Henderson said police from several agencies worked throughout the night in an attempt to find Burgess.

At one point, police thought Burgess may have gotten back to Lyons. That prompted a lockdown of several Wayne County schools Tuesday. Wayne County Sheriff Barry Virts added that Lyons’ schools were closed Wednesday as a precaution.

Students in Lyons were dismissed late Tuesday afternoon, with students that normally walk to school taken home by bus. Virts said that was due to police searching several areas in the hamlet of Lyons (the former village limits) where they thought Burgess might be.

Henderson said Burgess fled on foot but was taken into custody after a brief chase that involved officers from Ontario County, Seneca County, and the state police. At least one K-9 unit was used to capture Burgess.

“We are just glad this suspect is in custody,” Henderson said during a press conference Wednesday. “We felt he may be a danger not only to himself, but people in the community.”

Henderson said police are not identifying a person who was in the car with Burgess, or if that person would be charged with a crime. A source close to the situation told the Finger Lakes Times on Wednesday morning that the other person was Burgess’ mother.

Following the arraignment Wednesday, District Attorney Jim Ritts said the other person would likely not be charged. He declined to say if it was Burgess’ mother.

Several members of Burgess’ family were in court for the arraignment. They declined to talk to the media after Burgess was arraigned and remanded to jail.

Several Rochester TV stations and other media played videos that Burgess posted on social media before the robberies, with one reporter saying Burgess referred to himself as a “social media star.” Burgess reportedly called Channel 10 in Rochester the day before the alleged robbery and said “something bad was going to happen in Lyons.”

At the arraignment, Ritts asked Clifton Springs Justice John Maslyn to set bail at $100,000 cash or $200,000 bond. Ritts said in the videos Burgess referred to “multiple hiding locations” and “ducking police,” and said he had a “unique set of skills” — apparently a reference to actor Liam Neeson’s character in the movie “Taken.” Ritts added that Burgess has a lengthy criminal record and one felony conviction for driving while intoxicated in 2015.

Mix asked Maslyn to set bail appropriate to the charges, or have Burgess released on the county’s pretrial release program.

Although Burgess had hair and a beard in the videos, he was clean shaven and had a shaved head at the arraignment. After Maslyn set bail at $75,000 cash or $150,000 bond, saying Burgess was a considerable flight risk, Burgess objected.

The grand larceny charge is separate from the robbery charge. Police and Ritts are alleging that Burgess also stole construction tools from a job site in Phelps.

LEGAL NOTICE The Town of Seneca Falls is seeking Residents