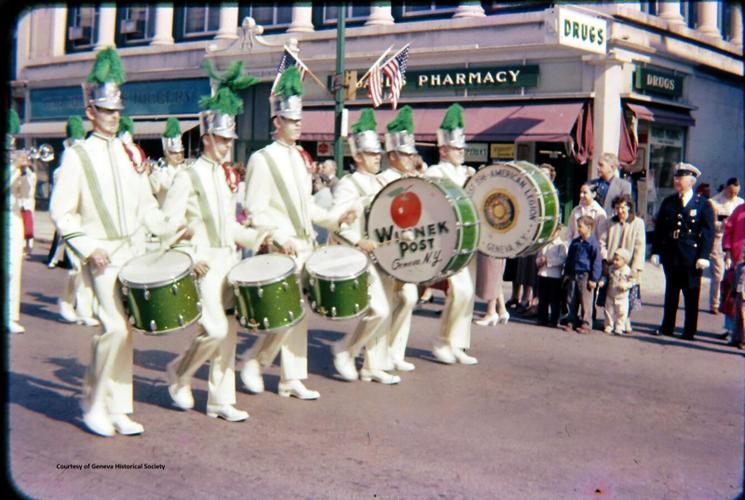 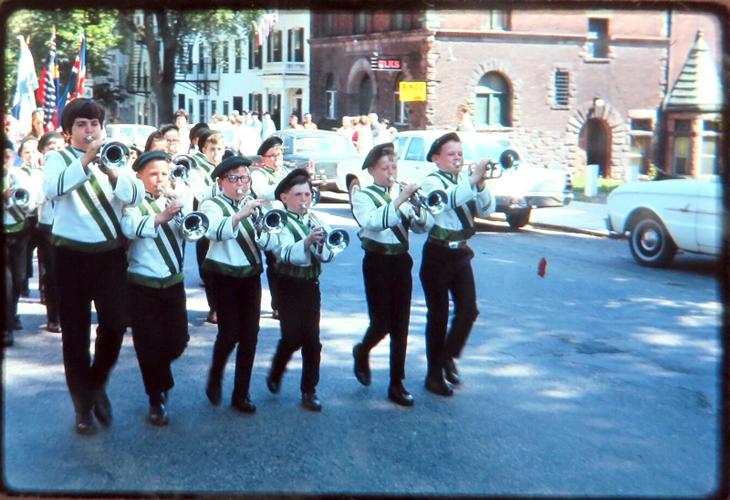 GENEVA — For nearly 50 years, the Appleknockers Drum & Bugle Corps proudly represented Geneva all over the state and beyond.

They entertained and thrilled local folks and competition judges for years with their trademark theme song of “Apple Blossom Time” and others. Sponsored by Winnek Post 396 of the American Legion, the Appleknockers were formed as a senior or adult corp in 1929 and marched until 1964. They performed as a junior corps for a while after that.

Their many awards, accomplishments and history will be recognized with the placement of a plaque near the Finger Lakes Visitors Center in Lakefront Park at 1 p.m. Aug. 20. The plaque and stone were paid for by donations from former members, friends and the Winnek post.

Opening comments will be made by former Appleknocker Jim Roth, an organizer of the event. Also speaking will be 3rd Ward City Councilor Jan Regan and Dale Mosher, commander of Winnek American Legion post.

A group of former Appleknockers will present music as part of the ceremony. They include Roth, Michael Brown, Charles Case, Brent and Steve Cooley and Geoffrey Whiting.

Roth, now 73 and retired from a long career with New York State Electric & Gas Corporation, started playing with the Appleknockers in 1962, which sparked a lifelong love of music. To this day, he still plays the trumpet on special occasions.

“The idea to remember the Appleknockers started in 2001 at one of our reunions at the Legion,” Roth said. “The idea came from Jim Bascom, former percussion instructor and co-founder. We formed a committee and bounced around a few ideas, but nothing stuck.”

When Bascom died of a heart attack shortly afterward, ideas were shelved until the 2006 reunion.

“We talked about a mural or plaque on the old Civic Center building where the junior corps used to rehearse or a monument or bench at Pulteney Park, where the senior and juniors corps played for Memorial Day celebrations,” Roth said. “But we just couldn’t get any traction and again the ideas went dormant.”

In 2019, Roth and his wife bought a summer home in Geneva, and he had the chance to meet Regan.

“I emailed her and asked if she had ever heard of the Appleknockers drum and bugle corp. She said yes that she had marched in the West Genesee Wildcats competitive guard and competed against the Appleknockers several times,” Roth recalled.

That sparked the commemorative plaque idea, and Roth said Regan was extremely helpful in getting the city behind the plaque at the Lakefront Park. Regan got Public Works officials Joe Venuti and Tim Higgins involved, along with the city manager’s office and staff.

Roth called on his old DeSales High School classmate Nick Massa, and his construction company helped move and place the boulder the plaque will be attached to.

As for his involvement with the Appleknockers, Roth recalls being at Boswell Field on the Hobart and William Smith Colleges campus in the summer of 1962 for the “Drums Along the Seneca” drum and bugle corp competition.

“While listening to the Appleknockers perform, I heard the sweetest sound I had ever heard. World famous Ken Petersen from Penn Yan was the soloist and I was mesmerized by his playing ability,” Roth said.

Petersen was later inducted into the Bugler’s Hall of Fame and the World Drum Corp Hall of Fame.

“At the end of the competition, the announcer said that the junior Appleknockers were going to be created and anyone interested could sign up, which I did. The first rehearsal was at the Legion in the fall of 1962 and over 200 kids showed up,” Roth said.

The Appleknockers’ leaders provided the instruments and taught the kids how to play and march.

“The camaraderie of the group was infectious. I loved the music, the pageantry and the excitement of hearing the crowds cheer us on. I played in the horn line until 1971 and then became director of the corps until I moved away in 1973,” he said.

“I have made lifelong friends with the Appleknockers. Many of us still get together for socializing and playing music and until COVID came along, we had regular five-year reunions starting in 1995,” Roth said, noting that many members went on to become music teachers and professional musicians.

After World War I, veterans groups such as the American Legion were interested in drum and bugle corps to play patriotic music at parades and other events.

Jack Gleason and T.J. McCormick started the Winnek Drum & Bugle Corps in 1929. The adult group won the New York State American Legion championship in 1934. The name Appleknockers came about, according to a Drum Corps History podcast, when a downstate judge in the late 1940s called them that as an insult, given Geneva’s location in and near apple growing areas of the Finger Lakes.

The name stuck and was proudly adopted as the corps’ popularity and award-winning performances grew. In 1940, John Kenyon became arranger, utilizing popular music and not just military marching music. Historians say the Appleknockers became known for their crowd-pleasing “big wheel” maneuver on the performance field, with musicians rotating 360 degrees around the drum major.

In 1948, Jack Bullock, an Ithaca College music student, got involved with the Appleknockers and introduced more innovative arrangements and formations, led by trombone player Frankie Farr and Hardy Carrassas and Ken Petersen. In 1958, they finished second in the American Legion national championships, sporting new white, green and red uniforms.

The Legion was unable to support the Appleknockers after 1964. Petersen took senior corps equipment and kept the junior corps going, winning more competitions as a parade band. It is believed their last performance was in 1979.