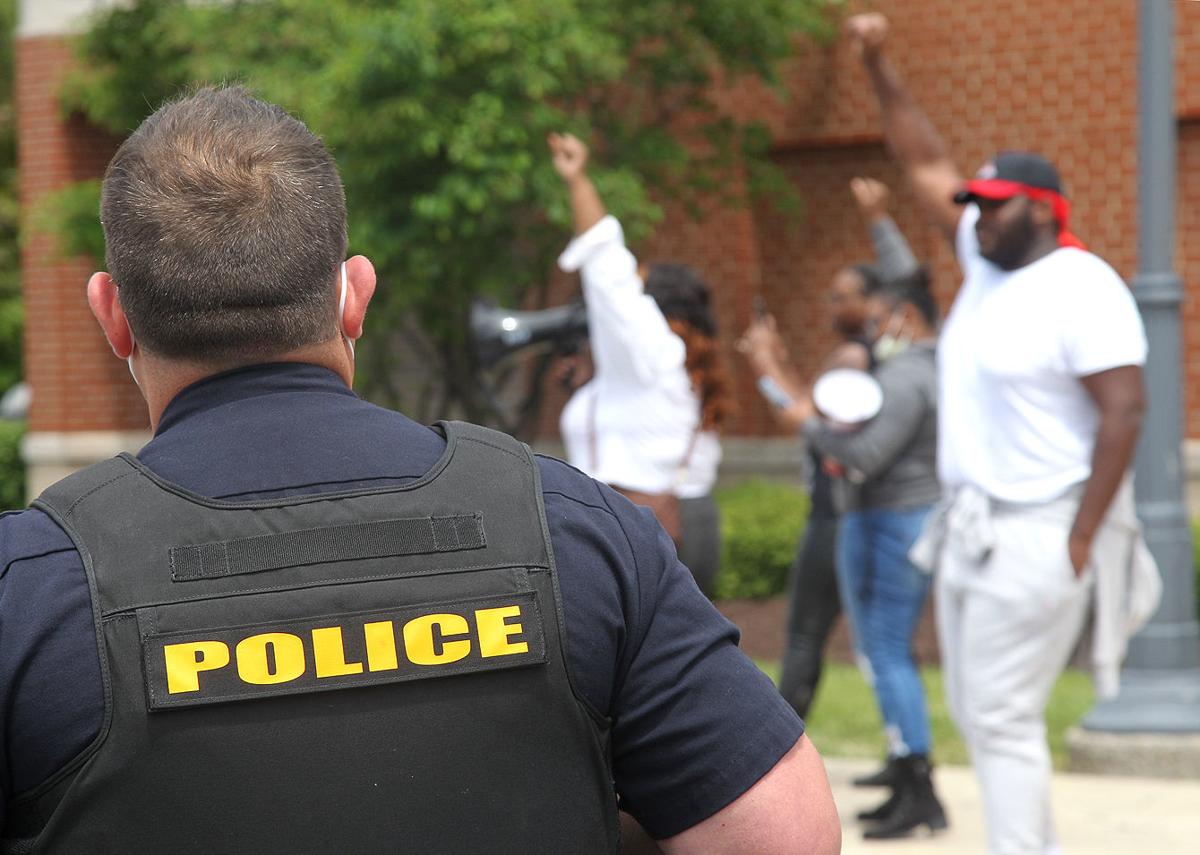 Geneva Police Chief Mike Passalacqua looks on as those leading a recent rally speak to the crowd.

Ali Turner, a recent William Smith College graduate and Geneva native holds up a sign at the rally. 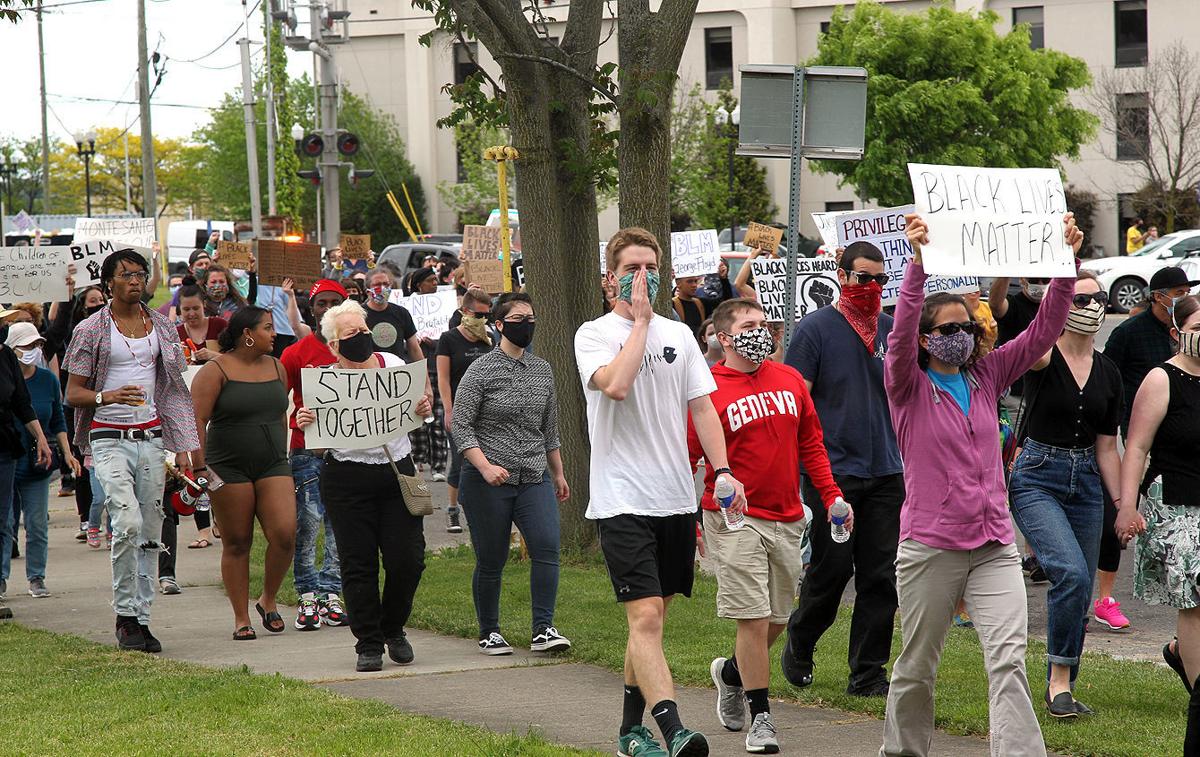 After gathering at the Public Safety Building on Exchange Street in Geneva, those attending Monday Black Lives Matter event headed out on Lewis Street at the start of their march.

Geneva Police Chief Mike Passalacqua looks on as those leading a recent rally speak to the crowd.

Ali Turner, a recent William Smith College graduate and Geneva native holds up a sign at the rally.

After gathering at the Public Safety Building on Exchange Street in Geneva, those attending Monday Black Lives Matter event headed out on Lewis Street at the start of their march.

GENEVA — On Sunday night, city police watched from a distance — or passing by — as an estimated 200-plus people protested the death of George Floyd, a black man who died last week after a white Minneapolis police officer pinned him to the pavement by holding a knee against his neck.

That was not the case Monday afternoon, when Geneva Police Chief Mike Passalacqua and numerous officers joined the crowd — which again numbered well over 100 people — during a second rally at the public safety building, and raised their fists with the rest.

“They heard us yesterday. That’s why they are here today,” said Jamie Harris, one of the rally’s organizers. “We will be here every day.”

Leading chants of “Black lives matter” and “No justice, no peace, no racist police,” Harris and her sister, Iesiah Harris, urged people to refrain from the violence seen at protests in major cities. Like Sunday night, the local rally Monday finished with a march on city streets and no destruction of property.

“Keep it classy and peaceful,” Iesiah said. “We live in this community.”

Jamie Harris, however, urged protesters to stop supporting what she called racist local businesses including several restaurants. She claimed they have discriminatory hiring practices.

“They may have black employees, but they work in the back,” she said. “We will shut them down.”

The Geneva Boys & Girls Club brought a van to the rally, handing out free water and ice cream. At one point, club employee Allauna Overstreet-Gibson took the microphone and directed comments at Passalacqua and his officers.

“We need to know you have our back if we are hurt by one of your own,” she said.

Passalacqua did not speak during the event but was seen nodding his head when comments were directed toward police.

While Sunday’s and Monday’s rallies were not organized by a specific group, the Geneva branch of the NAACP will hold a peaceful rally at 6 p.m. Wednesday at Bicentennial Park. Lucile Mallard, the branch’s longtime president, said the indefensible murder of Floyd was enough for Derrick Johnson — CEO of the national NAACP — to ask all branches to stand up and speak out, with the themes “We are done dying” and “We want justice for George.”

“Anyone with the same goals and mission for this event are invited to attend and participate. We are aware that some people will not join us because they are engaged with other groups who are protesting and rallying,” Mallard said in a press release. “The leaders supporting this rally hope by issuing a statement and creating meaningful opportunities for our communities, millennials and next generations they will become more engaged, activated and involved.”

Mallard said the NAACP received this statement from Passalacqua:

“If there is any sworn police officer that doesn’t have a serious problem with the circumstances surrounding the death of George Floyd, my message to them is simple — turn your badge in. Although this happened hundreds of miles from us, I understand the impact this has on the public’s trust of police officers all across the nation and locally,” he said. “I stand with you during these tense times in our nation and will focus my energy on continuing to build the relationship between the police and our community. As your chief of police in Geneva, I want to assure you that I in no way stand for any type of misconduct by members of the Geneva Police Department.”

Mallard said people have the right to express their anger and concerns, and that is what the youth and young adults of Geneva did Sunday evening and plan to continue this week. She called Sunday’s event a success for them

“We, the Geneva Area Branch of the NAACP, and our supporters ... believe in the values of peaceful protests and rallies,” she said. “We will never endanger the lives and property of our communities. We will not loot businesses. We will not have encounters with law enforcement. We will be assertive when stating our messages about ‘Justice for George Floyd and We are Done Dying.’ We plan to be a strong, powerful and positive presence in our community to enhance the unity of it.”

Mallard added that the NAACP has not forgotten the lives lost from COVID-19, and the organization is mindful of people fearing crowds during the pandemic. The organizers will be following the guidelines of wearing masks and will provide a mask to people who do not have one.