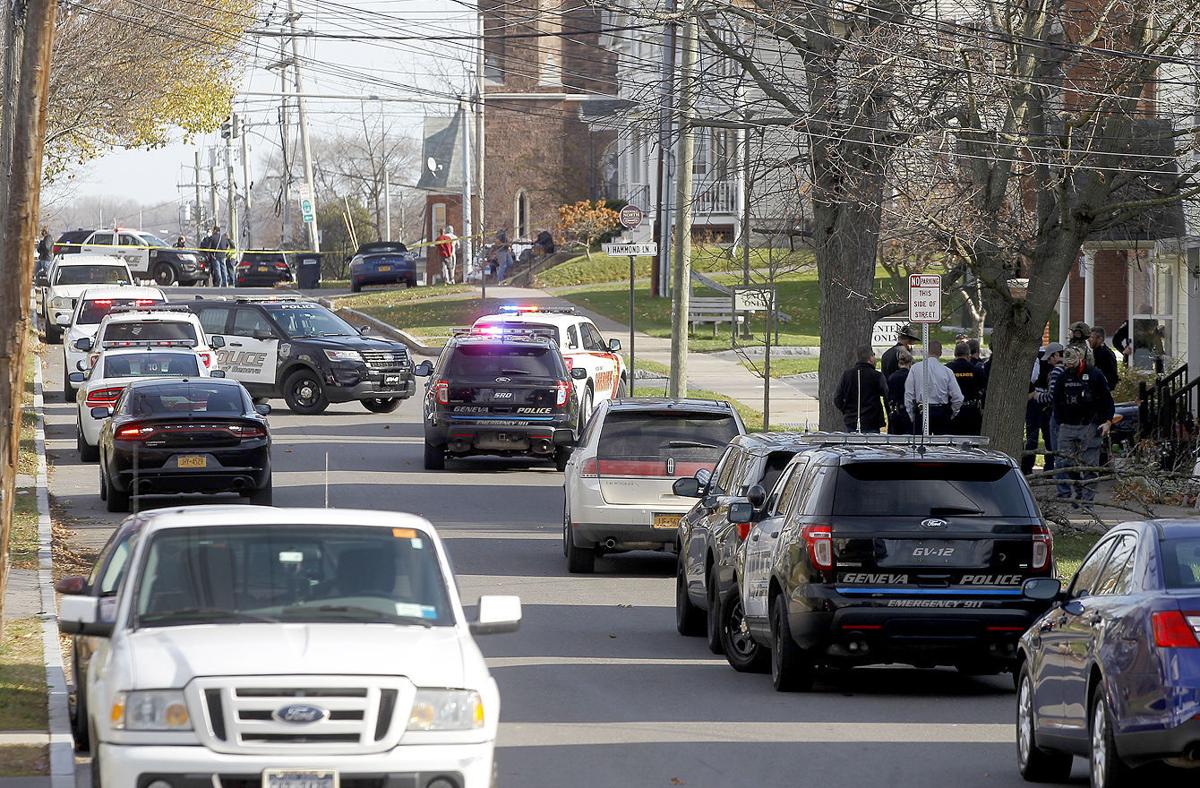 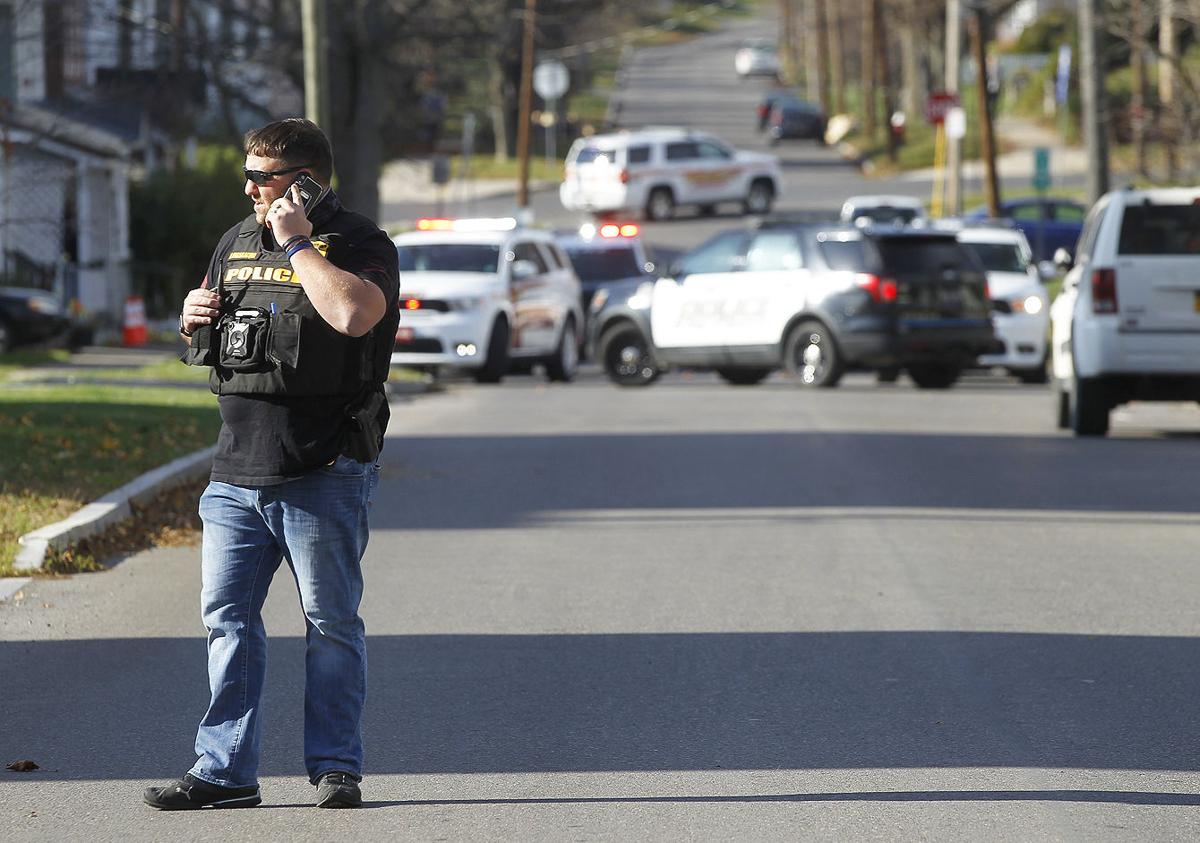 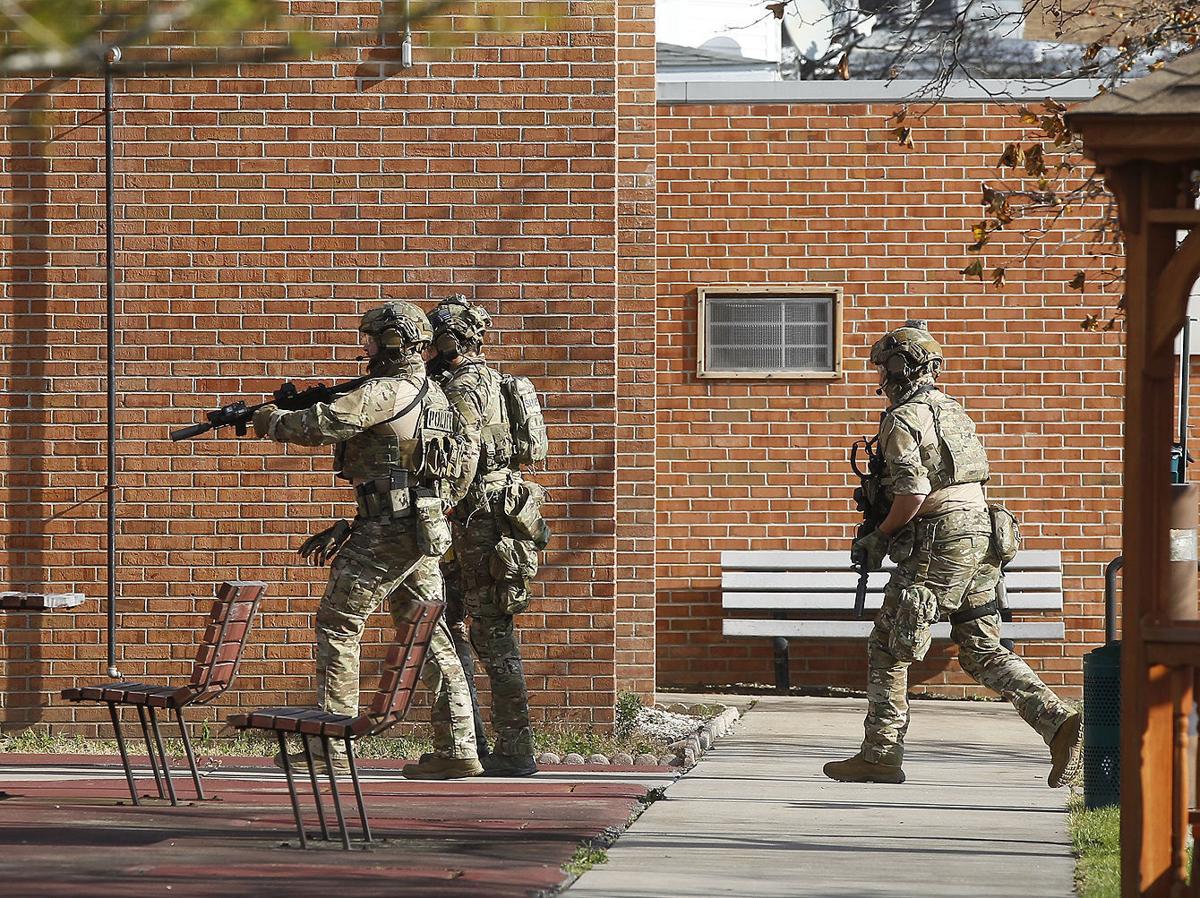 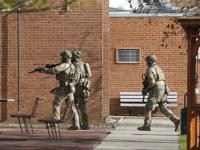 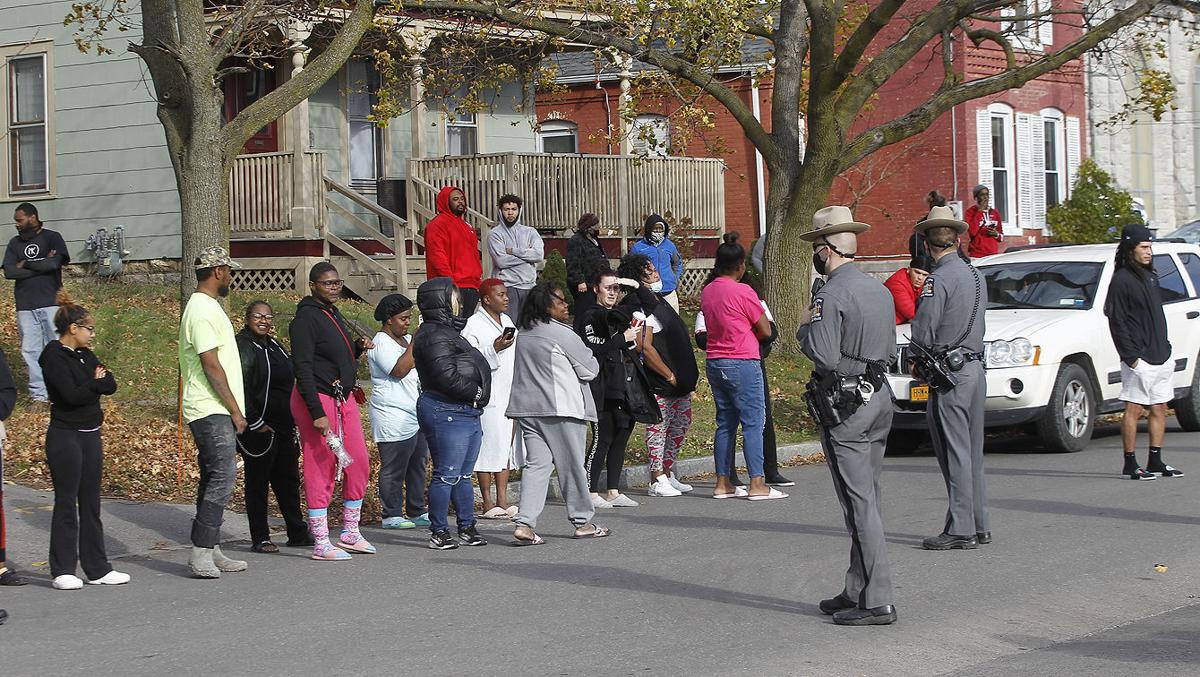 A large crowd gathers on Lewis and Genesee streets in Geneva. Many were family and friends of the man who had barricaded himself in Elmcrest Apartments, and they were pleading with him to surrender. 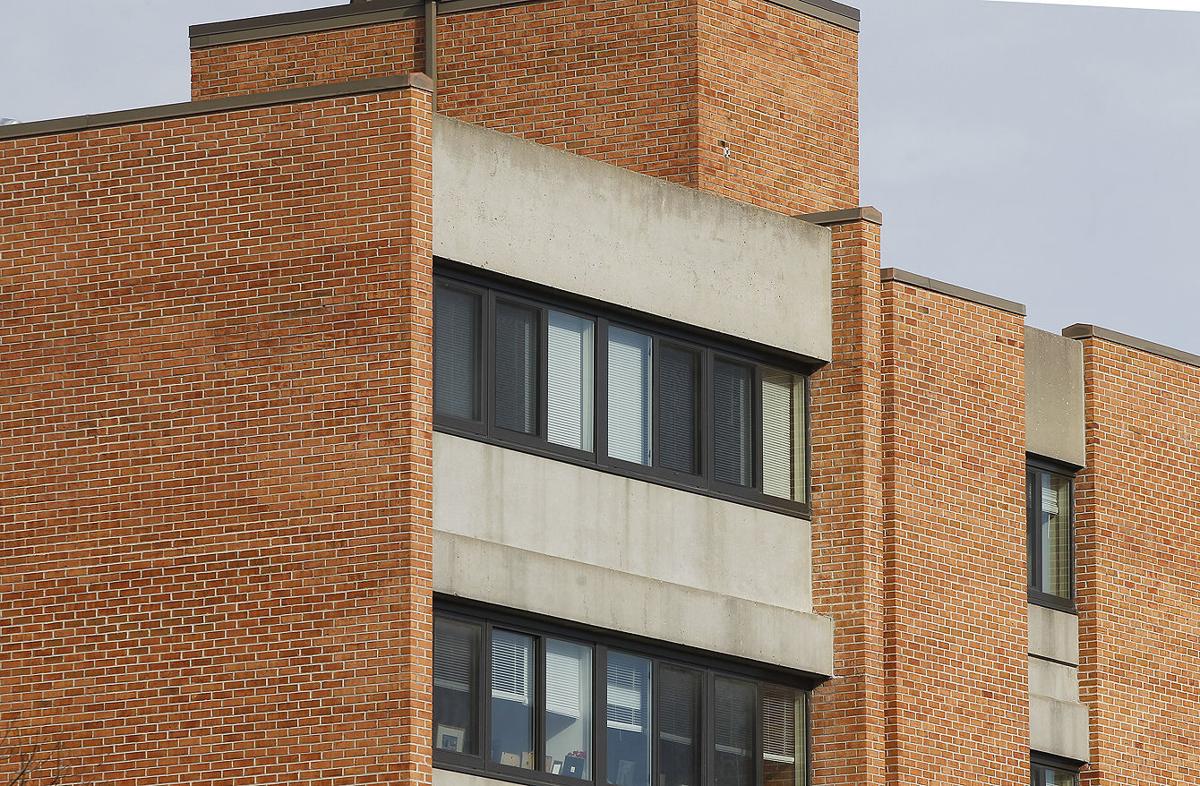 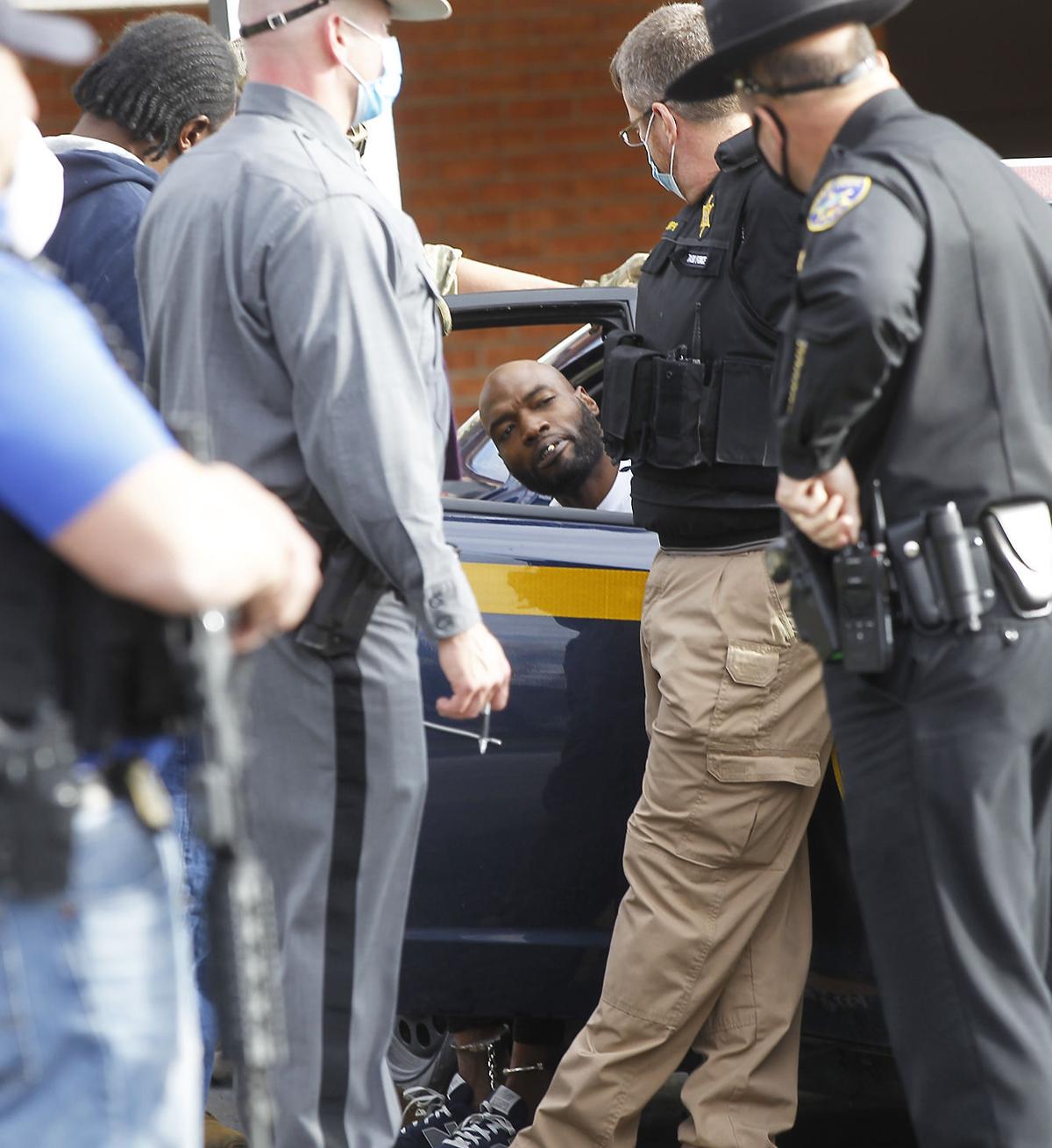 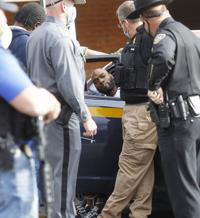 After a two-hour-plus standoff at Elmcrest Apartments in Geneva, a person of interest (above) surrendered to police Friday afternoon. Below, a SWAT team from the Ontario County sheriff’s office gets in position; however, the team never deployed.

A large crowd gathers on Lewis and Genesee streets in Geneva. Many were family and friends of the man who had barricaded himself in Elmcrest Apartments, and they were pleading with him to surrender.

After a two-hour-plus standoff at Elmcrest Apartments in Geneva, a person of interest (above) surrendered to police Friday afternoon. Below, a SWAT team from the Ontario County sheriff’s office gets in position; however, the team never deployed.

WATERLOO/GENEVA — As of Friday night, state police had not identified a man named as a person of interest in a suspicious Waterloo death — a man who later barricaded himself in a Geneva apartment complex.

“This is a very fluid thing,” Mark Eifert, a senior investigator for the state police, told the media after the two-hour-plus standoff ended Friday afternoon at Elmcrest Apartments on Lewis Street. “All I will say is we have a person of interest.”

Earlier, state police issued a short press release saying their agency and Waterloo police were investigating a suspicious death on East River Street in that Seneca County village. The Seneca County sheriff’s office also is involved in the investigation.

As of Friday afternoon, state police had not identified the victim, indicating more information would be released later.

Just before 3 p.m. Friday, the Geneva City School District issued a message to parents and community members on the sudden death of Ashia Chilson-Gray, a family and consumer sciences teacher at Geneva Middle School (see separate article with the entire statement).

At approximately 11 a.m. Friday, Geneva police responded to Elmcrest Apartments to check on a report of shots fired. Geneva Police Chief Mike Passalacqua said later that report turned out to be unfounded.

However, police remained at the scene until close to 2 p.m. The man, who may have been armed with a gun, was barricaded in a fifth-floor apartment. Numerous police officers from several agencies eventually responded to the scene, including officers from the Ontario and Seneca county sheriff’s offices and state police.

During that time, family members and friends of the man — they referred to him as Johnny — pleaded with him to surrender by making numerous phone calls to him. What started as a small group turned into dozens as they stood at the corner of Lewis and Genesee streets, many of them crying as the situation evolved.

“Ya gotta come down, Johnny,” one man said.

A SWAT team from the Ontario County sheriff’s office was positioned but did not deploy. County Sheriff Kevin Henderson also was at the scene, talking to family members during and after the incident.

The man surrendered about 1:25 p.m. and was handcuffed outside the apartment complex. He was put in a state police car and sat there for about 30 minutes while family members and friends were allowed to speak to him.

“I’ve been a police officer here for 18 years, and many of the faces and families I saw here today are familiar to me,” Passalacqua said. “The family and police worked together to bring this to a peaceful resolution. That is what it’s all about. There are a thousand different ways this could have turned out, but with the family’s help no one was hurt.”

Passalacqua said the man, whom he would not identify, apparently was wanted in connection with the Waterloo incident and also an assault in Cayuga County. He declined to go into specifics on those cases, saying that information had to come from state police.

“I really don’t know the link at this time,” he said. “Police from several agencies are still trying to piece things together. For us, luckily, this ended peacefully and no crime was committed here.”

"The Geneva City School community is greatly saddened by the sudden death of one of our staff, Ashia Chilson-Gray. Ms. Chilson-Gray was a family and consumer sciences teacher at Geneva Middle School. As a school community, we would like to express our deepest condolences to her family and friends.

"Counselors and mental health professionals are available to provide assistance to students as necessary. Counseling support will be available over the weekend. Please visit www.genevacsd.org for details.

"Lastly, in sorrow, we mourn those we’ve lost; in gratitude, we embrace those around us; and in sympathy, we reach out to those who grieve."