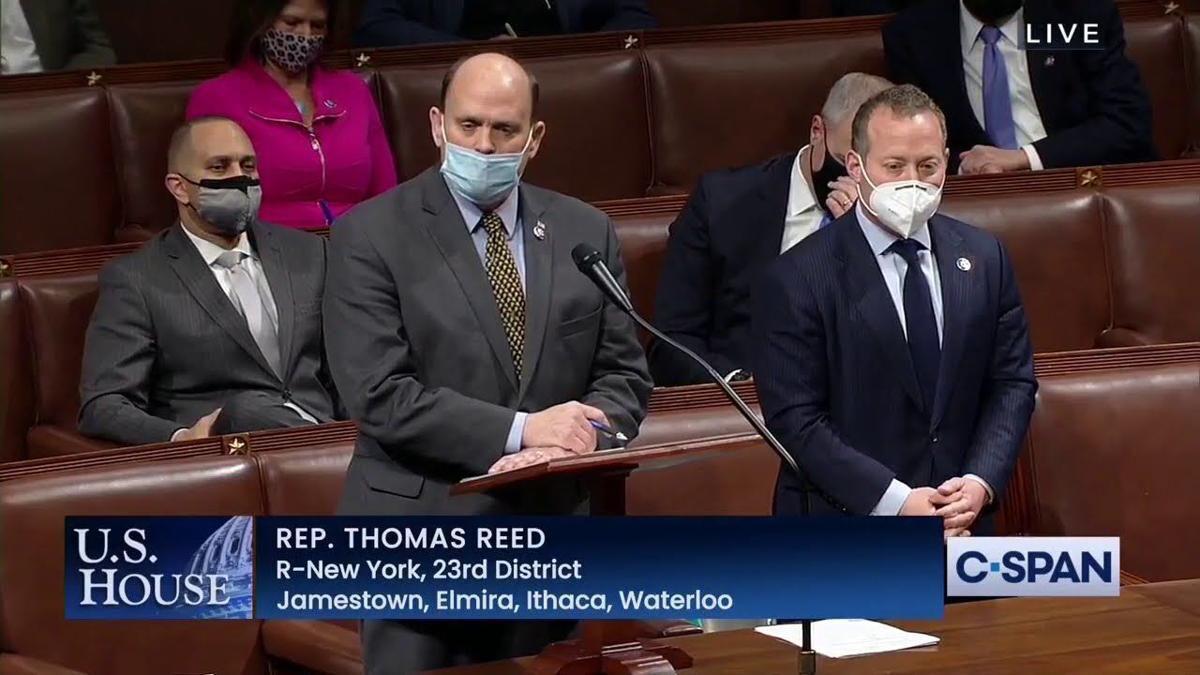 Rep. Tom Reed speaks on the Democratic side of House floor last Wednesday, decrying the mob of President Trump supporters who stormed the Capitol. At his right is Congressman Josh Gottheimer of New Jersey, the Democratic chair of the Problem Solvers Caucus. Reed, the Republican chair, said impeachment is not the way to punish Trump for encouraging supporters to storm the Capitol.

WASHINGTON — Rep. Tom Reed said he wants President Donald Trump to “face justice” when it comes to his role in inciting a mob of supporters who attacked the Capitol last Wednesday, Jan. 6, but impeachment isn’t the answer.

The comments come by way of an oped penned by Reed, R-23 of Corning, that appeared in Monday’s New York Times.

Reed’s comments come as the House prepares to impeach the president for a second time. Trump faces a single charge — “incitement of insurrection” — in the impeachment resolution that the body will begin debating today, a week before Democrat Joe Biden is set to be inaugurated, Jan. 20.

“All responsible parties, including President Trump, must face justice,” Reed wrote. “Yet, the manner in which President Trump and others are held accountable is a difficult question that demands more scrutiny. If our leaders make the wrong decision in how to hold him accountable, it could damage the integrity of our system of justice, further fan the flames of division, and disillusion millions of Americans — all while failing to accomplish anything. Given the tools that lie before Congress, it is clear that pursuing impeachment only days before President-elect Joe Biden is inaugurated is not the answer.”

Reed said the biggest issue with impeachment is what he called the “inadequate time to reasonably investigate, present and debate articles of impeachment. Rushing through the substantive and procedural requirements for such a monumental action will directly diminish the validity of impeachment. We cannot rush to judgment simply because we want retribution or, worse, because we want to achieve a particular political outcome.”

Reed finds the charge of “incitement of insurrection” potentially problematic.

“But while the president’s words were unwise, intemperate and wrong, they may not qualify as incitement,” said Reed. “And an impeachment on the grounds that they do will inevitably erode the norms around what may be considered constitutionally protected speech.”

Reed said he also worries that a “snap impeachment” will further fuel the nation’s deep divisions at a time when we need healing.

“With the start of a new administration and a new Congress, there is a real opportunity to build bridges and unite the American people around our shared values,” he writes. “Failing to do so will undermine our efforts to bring people together. It may even provide excuses and delusional incentives for those who would incite further violence. Impeachment will also consume Congress long after Mr. Trump has left office, inhibiting Congress’s ability to tackle the Covid-19 crisis, reignite our economy and other pressing issues.”

And Reed said a “too-quick impeachment … will be seen as validating the view that impeachment is part of a multiyear campaign to delegitimize Mr. Trump’s 2016 election.”

There are other options, Reed said, including censure, criminal proceedings and actions under the 14th Amendment.

A section of the amendment reads:

Added Reed: “We must also look at alternatives that could allow Congress to bar Mr. Trump from holding federal office in the future.”

“As a former federal prosecutor, I approach the question of impeachment by reviewing the facts at hand. The facts are this: last week, the U.S. Capitol was attacked by a mob intent on disrupting a Joint Session of Congress and preventing certification of the Electoral College results.  Consequently, the U.S Capitol Police were overrun.  Insurrectionists stormed and vandalized the U.S. Capitol, assaulting those who stood in their way and leaving five Americans dead.  One law enforcement officer was killed and approximately 50 others were injured.  Many of those officers were severely beaten by the mob.  For the staff and police officers who were in the Capitol that day, this event will forever haunt them.

“It cannot be ignored that President Trump encouraged this insurrection – both on social media ahead of January 6th, and in his speech that day.  By deliberately promoting baseless theories suggesting the election was somehow stolen, the president created a combustible environment of misinformation, disenfranchisement, and division.  When this manifested in violent acts on January 6th, he refused to promptly and forcefully call it off, putting countless lives in danger.

“We take oaths to defend the Constitution because at times, it needs to be defended. Without the peaceful transfer of power and the acknowledgment of election results, we can't sustain our political system. Congress is tasked with holding the Executive accountable.  As the Ranking Member of House Homeland Security Committee, country always comes first.

“To allow the President of the United States to incite this attack without consequence is a direct threat to the future of our democracy.  For that reason, I cannot sit by without taking action. I will vote to impeach this President.

“The divide in our country is more clear than ever before.  I hear my Republican colleagues in their argument that impeachment only further divides our country at a time when we must move forward.  I agree.  There must be a continuance of government and a peaceful transition of power.  But I also believe firmly that I must follow the law and the facts and hold this President accountable for his actions.

“Finally, ahead of tomorrow’s vote on impeachment, the House will this evening consider a non-binding resolution requesting that the Vice President invoke the 25th amendment to remove this President.  Vice President Pence has made clear he will not do this, and believes elected representatives should be tasked with this effort, not acting and remaining cabinet members. Accordingly, I will not support this effort.”

This story has been updated to reflect Katko’s statement on impeachment of the president.