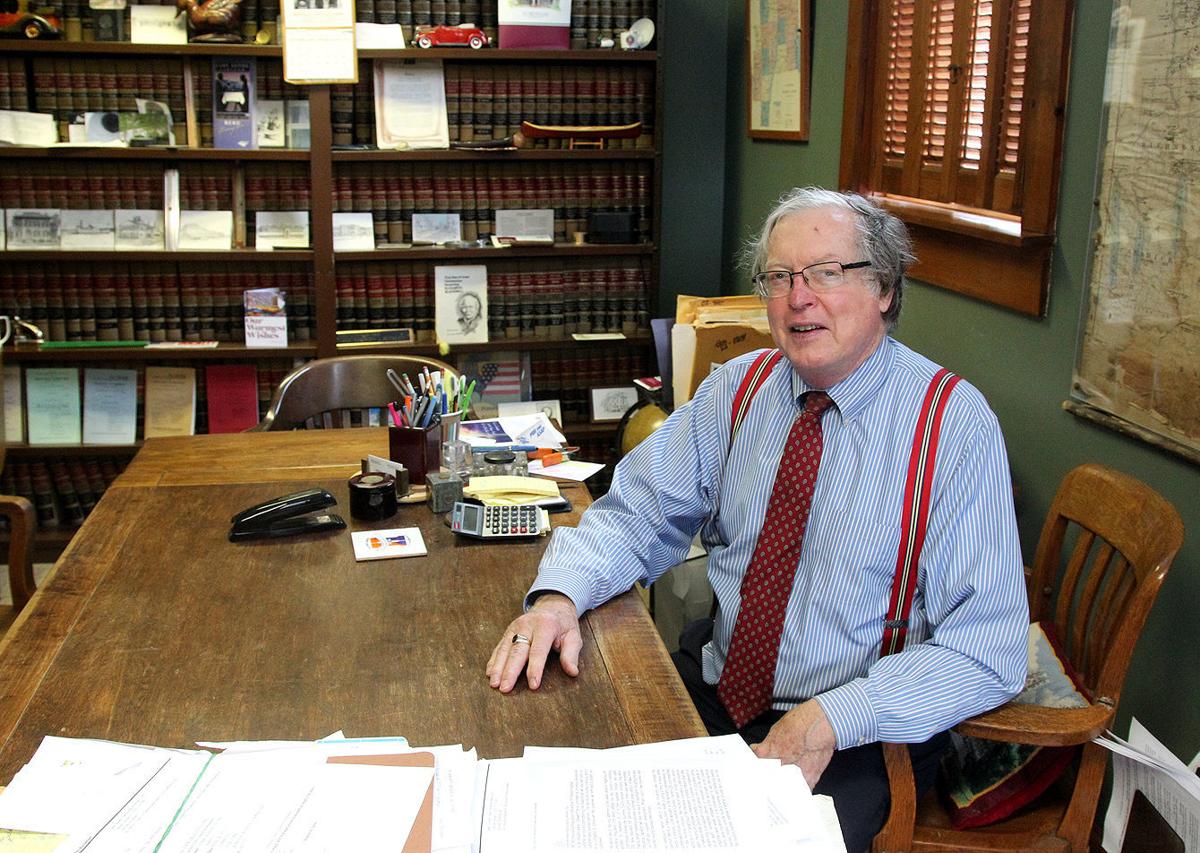 Geneva City Court Judge Tim Buckley retired at the end of 2019. He was a City Court judge for nearly 25 years, the last 12 years as supervising judge. 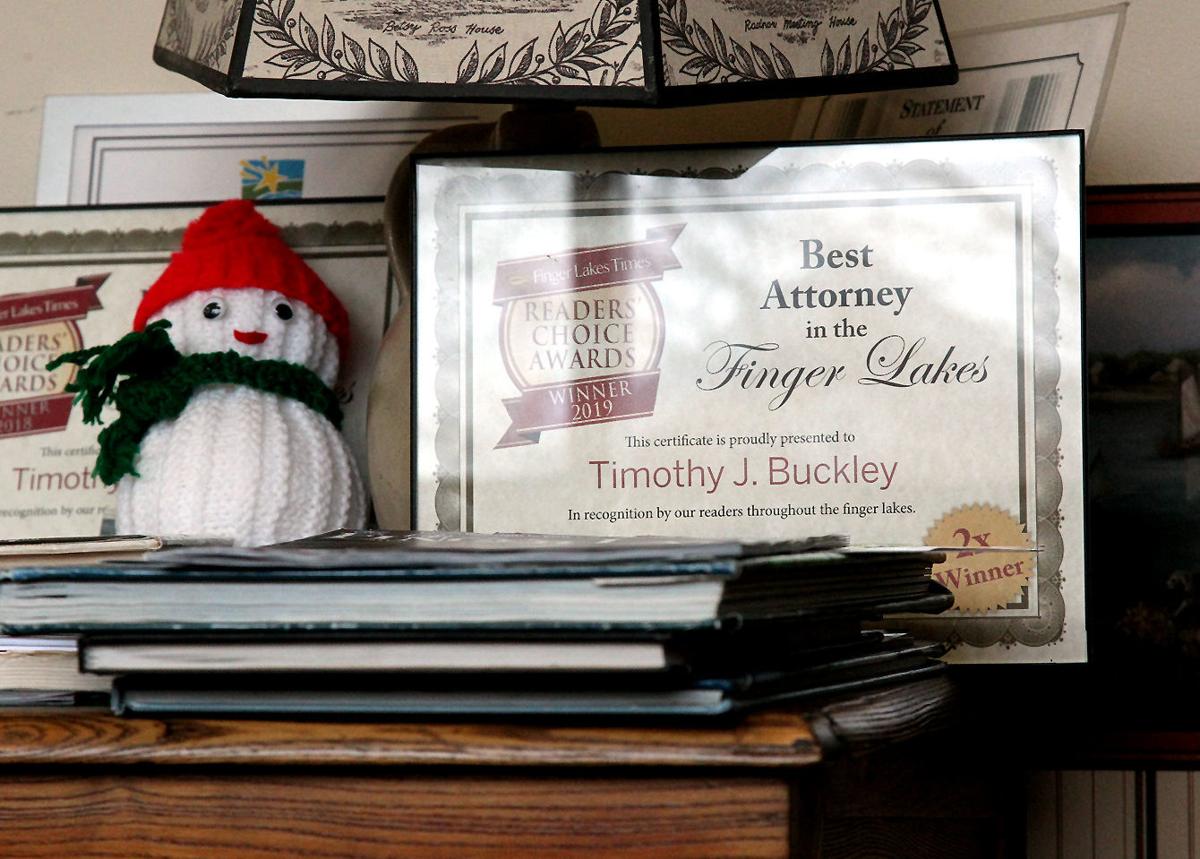 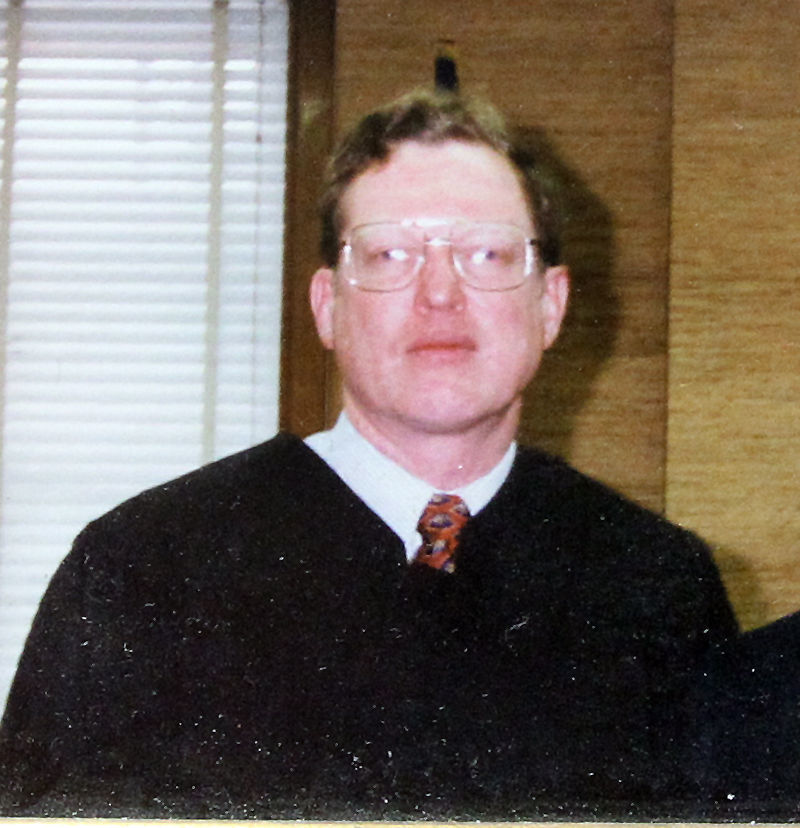 Photo of Buckley early in his career.

Geneva City Court Judge Tim Buckley retired at the end of 2019. He was a City Court judge for nearly 25 years, the last 12 years as supervising judge.

Photo of Buckley early in his career.

GENEVA — While he didn’t do it all the time, occasionally Tim Buckley would read a poem after sentencing someone in Geneva City Court.

Or, he would give the person a copy of the well-known poem by Robert Frost, “The Road Not Taken.”

“Everybody can get on the wrong road, myself included,” Buckley said last week from his law office at the corner of Washington and Pulteney streets. “You encourage people to get on the right road.”

Buckley believes he did that for some — or many — during his nearly 25 years as a City Court judge before retiring at the end of 2019. He worked the last 12 years as the court’s supervising judge.

Buckley turns 70 next month, the state’s mandatory retirement age for a municipal judge. Although he could have run for another term last November and served until the end of 2020, he decided against it.

“I decided not to do that, although I had some misgivings after I said it,” he said. “I’m busy here (at the law office). It’s a little bit of an adjustment.”

Born and raised in Geneva, Buckley is a 1967 graduate of DeSales High School. He proudly points out his class was the largest in school history.

Buckley went to Fordham University in New York City, where he earned a degree in political science. He and his older brother, Peter, who graduated from St. John’s Law School the same weekend Buckley graduated from Fordham, shared an apartment.

“I had never been to New York City, except for my grandfather dying. I was only 1 year old then,” Buckley recalled. “ ... I grew to love Fordham. I played rugby and met a lot of good people there.”

One of them was his future wife, Eileen (McDonough), who grew up in Brooklyn.

Buckley earned his law degree from Fordham Law School. He was admitted to the bar March 7, 1975 — a day he refers to as the “trifecta.”

“I got admitted to the bar ... it was (Eileen’s) birthday, and that is the day I proposed to her,” he explained.

Buckley applied to work at a number of law offices in the state. He ended up joining an attorney in Canisteo, Steuben County. However, he “got a little restless to get back to Geneva” and opened a practice with his cousin and fellow attorney, Marty Eades.

“We were young, eager and broke,” he said with a laugh, noting their office was at first on Exchange Street, above Discount Appliance.

In 1978 they moved into the current office on Washington and Pulteney, which had housed the dry-cleaning business of Buckley’s father, Maurice. The office is across the corner from Buckley’s home, which he and Eileen bought in 1977.

“It’s worked out very well. It’s accessible and in a nice neighborhood,” Buckley said of his office. “Sometimes people make fun of me for driving my car across the street, but I do that so my wife can get her car out.”

Most of Buckley’s initial legal work involved real estate, but later he delved into probate, wills and estates. He also did a fair amount of personal-injury work for plaintiffs.

“When you are young, you take the cases you can deal with,” he said. “Lawyers should not take cases they aren’t happy doing or are not good at. You can get yourself in some issues there.

“I did well with personal-injury work. If you had an accident on a county road, I would go out and take a photo of the accident scene. I was on Melvin Hill (Road) a couple of times trying to take a picture of an intersection, and almost got killed by cars going by.”

Buckley later referred injury cases to other attorneys while continuing to tackle real estate and estate planning, and going into elder law. While most of his clients are from Geneva and Ontario County, he has some from Seneca, Yates and Wayne counties.

“I’ve had very loyal clients. I’ve had clients with a lot of resources, people who don’t have much, and some in between,” he said. “I’ve been blessed.”

Early in his career, Buckley became an assistant Ontario County district attorney under DA Jim Harvey; Harvey eventually became a county judge. Buckley was one of four part-time assistants, a position he held until 1995.

“It was a good experience,” he said. “You lost some cases early and get kind of frustrated, then you get your confidence built up.”

In 1981, Buckley and future county DA Mike Tantillo — Tantillo was an assistant DA at the time — played a role in People v. Belton, an Ontario County case that made it all the way to the U.S. Supreme Court. Harvey argued the case, which involved a drug search and seizure after a traffic stop on the Thruway.

“Mike and I assisted Jim on the case ... what was rewarding was we won,” Buckley said. “It was a tough case ... I went to oral arguments and was admitted to the Supreme Court that day. There was a formal ceremony, and they called me ‘Mr. Buckley from New York.’ “

Buckley first ran for city judge in 1993, losing to Jack O’Malley. He was appointed an associate judge by Mayor Joanne Wisor in 1995, prompting him to leave the DA’s office.

He was elected supervising judge 12 years ago, succeeding Walter Gage.

“I let each judge have their independence,” he said. “It’s not my role to tell them how to conduct court.”

“City Court is a busy court. It’s a court of first impression and for many people; it’s the only time they are in court. You try to be fair to both sides.”

Buckley said he will miss the people he saw in court over the years — staffers, plaintiffs, defendants and attorneys.

“It’s about accountability and also guidance,” he said. “I’ve had people, not too often, thank me for making them accountable. I had a guy write me a letter saying he used to get up about 1 or 2 in the afternoon, but because I held him accountable, he was up in the morning, working and on the right path. That makes you feel good.

“I call courtrooms one of the last bastions of politeness. For the most part, people are polite and respectful to the judge. That is something that is phasing out in society, demeanor and civility.”

While he is no longer on the bench, Buckley has no plans to slow down or stop his law practice.

“I will miss the courtroom ... but I’ve still got gas in the tank,” he said. “I’m a high-energy guy. I feel like I’m 60. People are actually surprised at my age. I guess my hair is changing color, but otherwise I try to stay in good shape.”

What others are saying ...

... about Tim Buckley, who recently retired after nearly 25 years as a Geneva City Court judge:

"I've known Tim Buckley since before I was an attorney, and my first impression was what a decent guy he was and the kind of lawyer that I would love to be some day. When I went to law school, my dream was to come back home, hang a shingle and do a little bit of everything — and that has been what Tim has done for his entire career. He’s also been a great judge and showed concern for people in his courtroom. Above all that is his love of community and the people of Geneva."

"I met him in the summer of 1991, when I was 20 and interested in going to law school, and someone suggested I see him. He gave me a sense of what an attorney does and told my mother I needed to take the bar exam ... and later recommended me for admission to the bar. As a judge he was fair, firm, thorough, reasonable, judicious. He was a very good judge. He knew the law and was very fair."

"I've known him for some 30 years, first as an (assistant district attorney) and then as a judge. I am going to miss him greatly. I thought he was a great judge — very fair, very considerate and concerned about the people in his courtroom. One time when was an ADA, he gave a pair of his brand-new gloves to a defendant. The guy came to court and hardly had anything, and Tim gave the man his new gloves. He also has a great sense of humor and is a great family man."

"Tim Buckley is someone who has devoted his life to the Geneva community, both as an assistant DA and as a judge since 1995. Without a doubt, he loves our community more than anyone I’ve encountered other than the possible exception of my father-in-law, who was the former mayor. Even though we may not have agreed on a case, after he made a ruling any argument was forgotten. He was always the consummate professional and has certainly done a great job for our community."