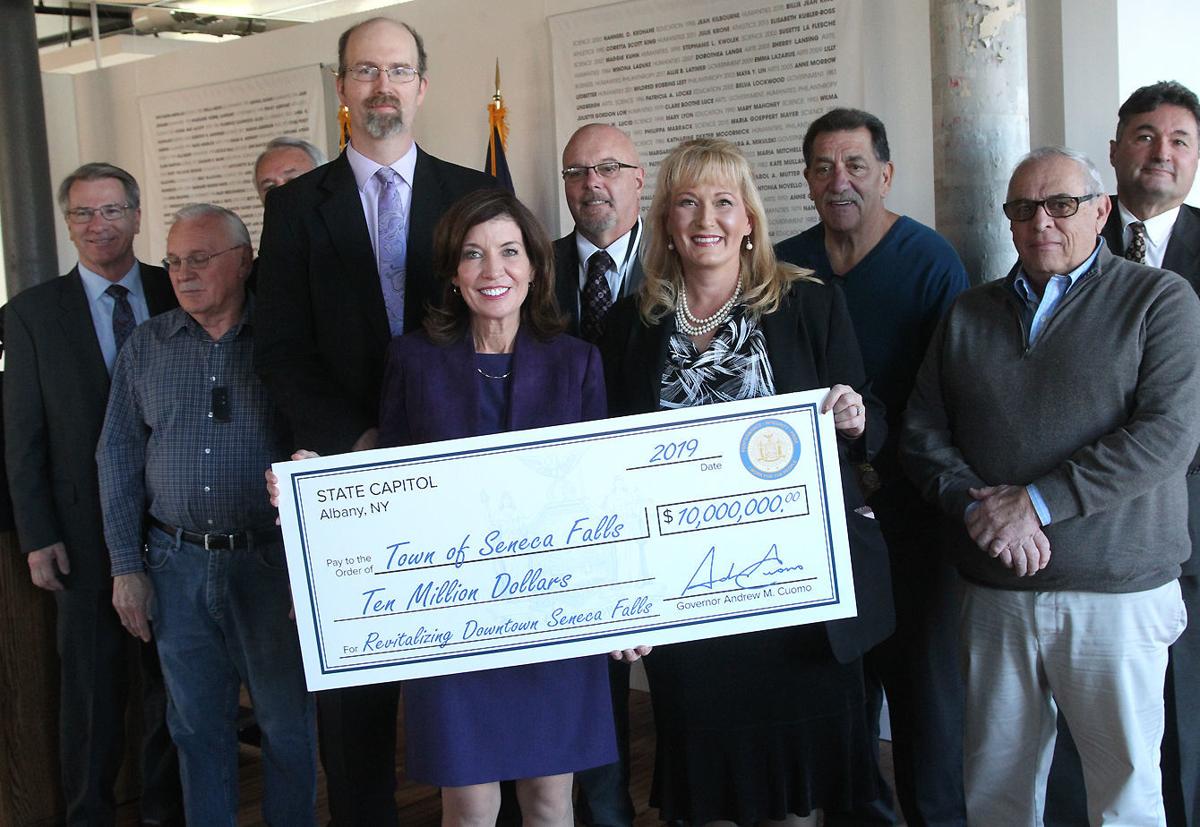 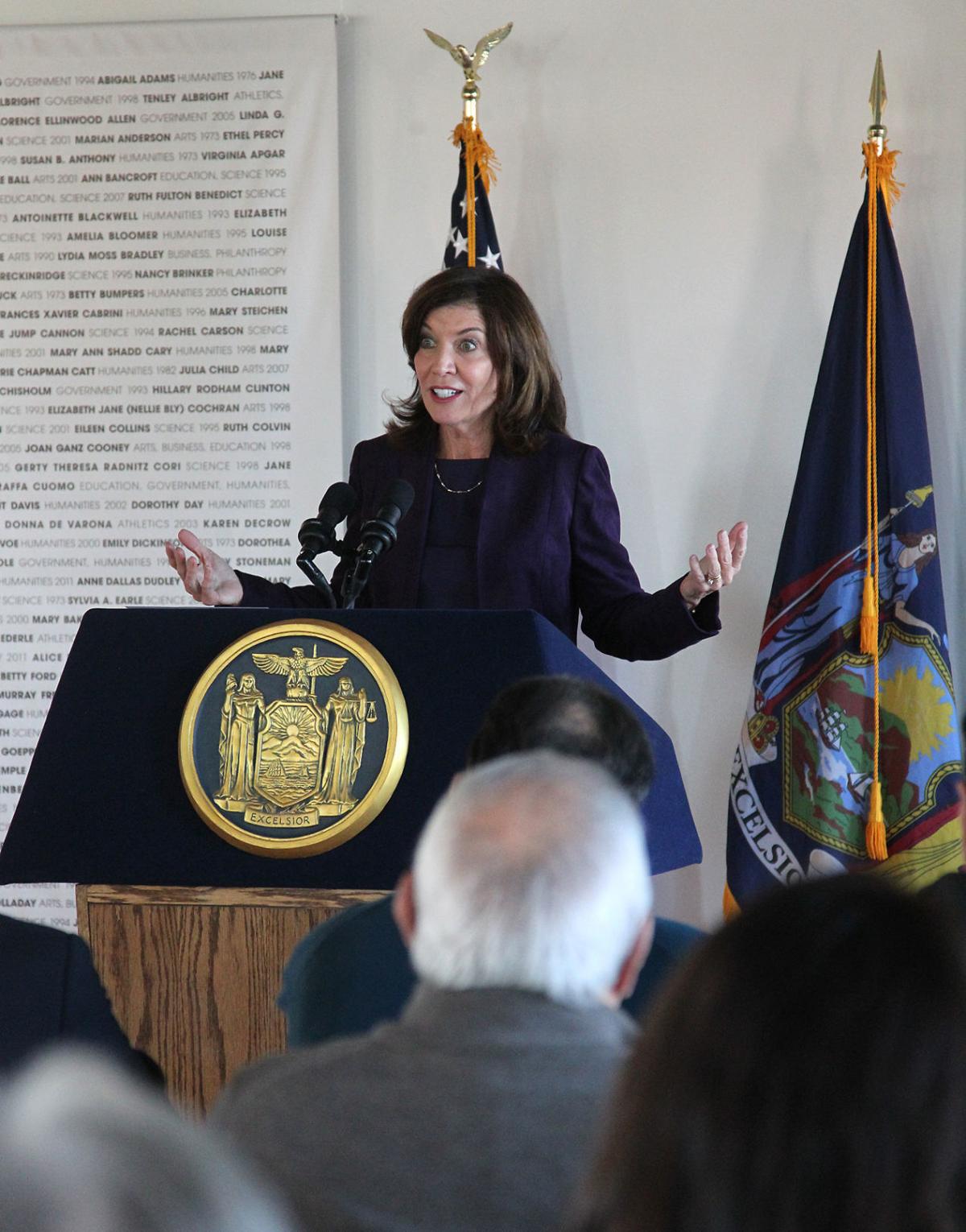 Lt. Gov. Kathy Hochulwent to the new home of the National Women’s Hall of Fame Wednesday. 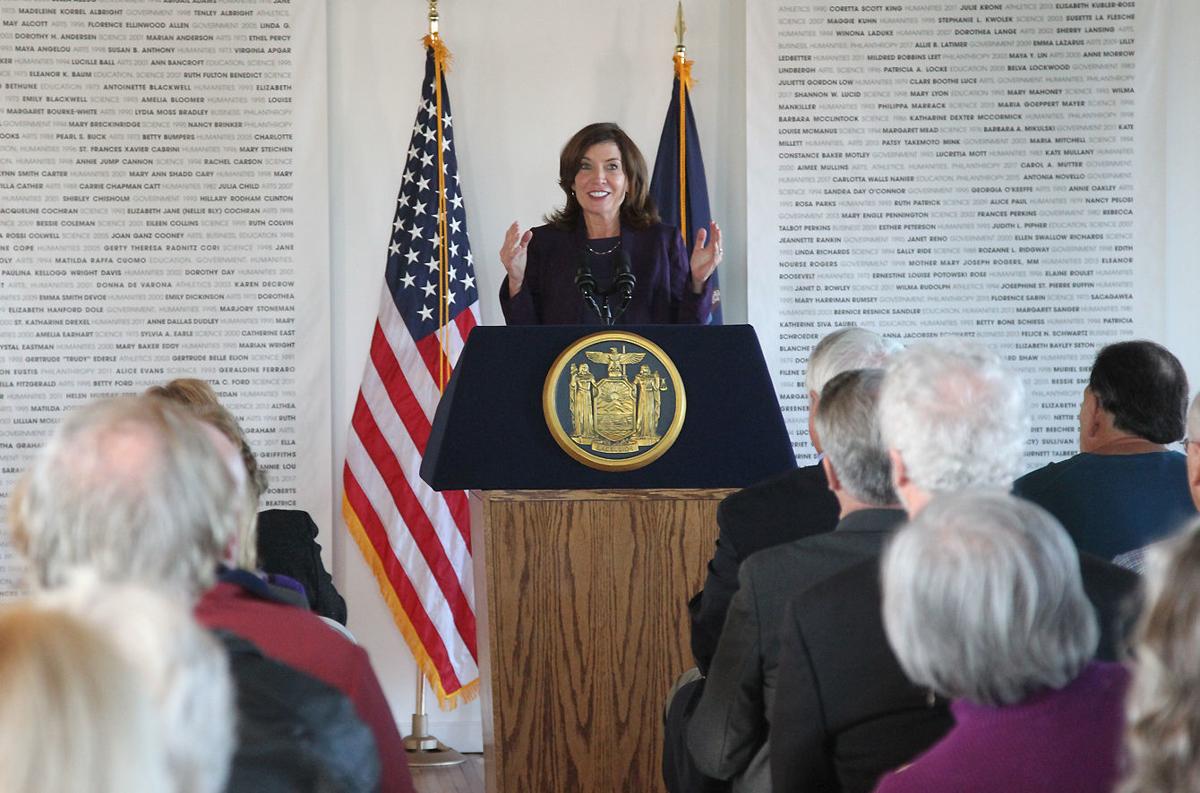 Lt. Gov. Kathy Hochulwent to the new home of the National Women’s Hall of Fame Wednesday.

SENECA FALLS — Persistence paid off for this Seneca County community.

“Like the early suffragists at the first women’s rights convention, you never gave up,” Hochul said. “It’s in the DNA of the women who started the fight right here many years ago and continues in women today.”

Hochul has been in Seneca Falls many times, as lieutenant governor and personally with her family. She has stayed at the Gould Hotel, jogged on the Ludovico Sculpture Trail and walked downtown.

“I love this community. It’s a special place, gifted with a history that others can only dream of,” Hochul said.

She said the state DRI money can help make the town a magnet for tourists, especially with a canal running through the middle to bring visitors by boat.

“The community is on the cusp. Communities like Seneca Falls have great potential, but need a boost,” Hochul said. “There’s a lot of empty storefronts, victims of competition from big-box stores and online shopping. I urge you to put aside your differences and form a common vision, like you did with the grant application. Something like this can transform a community forever.

“It can be a wonderful life in Seneca Falls,” Hochul added, a reference to the belief that the classic film “It’s A Wonderful Life” was based on Seneca Falls.

After the applause died down, Hochul praised the town’s Local Development Corp., which did the hard work of writing the application. She introduced Joell Murney-Karsten, chairwoman of the LDC board.

“It’s an amazing day for Seneca Falls,” Murney-Karsten said. “I thank the LDC board, the lieutenant governor, the Finger Lakes Regional Economic Development Council, the DRI selection committee, former state Sen. Mike Nozzolio and Menzo Case, CEO of Generations Bank, who revived the LDC in 2013 ‘to prepare us for this day.’ We can use his money to showcase our rich history, help develop downtown, increase tourism and promote economic development and housing.”

Murney-Karsten said with the cities of Auburn and Geneva winning DRI awards earlier and Waterloo a possible future winner, she’d like to see a Finger Lakes corridor from Auburn to Geneva.

“I want to thank the lieutenant governor and Gov. (Andrew) Cuomo for believing in Seneca Falls,” she continued. “We want people to live the American dream right here in Seneca Falls.”

“In 3-5 years from now, this community may almost be unrecognizable in many ways,” Hochul predicted.

After the presentation of the traditional large check, Murney-Kasrten exchanged high-fives with many well-wishers. She said the LDC took on the task of writing the application without hiring an outside consultant, a point she was proud to note.

“We applied in 2016, took a year off in 2017 to write a new economic development plan, applied, and was a finalist in 2018 ... and won the grant this year,” she said. “Myself and Greg Zellers, our executive director, have grant-writing experience. We’ve been through the process and had the knowledge and ideas.”

Murney-Karsten said there are jobs to be had in Seneca Falls, but housing and the amenities to attract people to live in the town are needed and will be a focus of the DRI effort. Preserving historic structures, downtown housing above stores, helping existing and new businesses, and tapping into a rich history will be goals as well.

She said about $300,000 of the $10 million grant will be used for the necessary studies that must be done before specific projects can be developed.

“We will start that soon and take 9-12 months to get the studies done before we submit projects,” Murney-Karsten said.

The town was informed in June that it was one of three finalists for the Finger Lakes grant this year. Seneca Falls was chosen over applications from the city of Canandaigua and the village of Newark. The village of Waterloo also applied this year but was not a finalist.

Not only have Auburn and Penn Yan won DRI grants for the Finger Lakes region, so have Geneva and Watkins Glen.

Applications were judged on the basis of seven criteria.

A local planning committee will be formed to lead the effort, supported by a team of private-sector experts and state planners. A strategic investment plan for downtown will examine local assets and projects that align with the community’s vision for downtown revitalization and can be implemented.

In the words of Lieut. Gov. Kathy Hochul, Wednesday was a "two-fer'' for Seneca Falls.

After Hochul announced at the new home of the National Women's Hall of Fame that the town was selected for a $10 million Downtown Revitalization Initiative (DRI) grant, there was a ribbon-cutting to mark the start of the move of the Women's Hall of Fame from its current 76 Fall St. location to the renovated former Seneca Knitting Mill on Canal Street.

The Hall plans to reopen in the historic 1844 mill by the spring of 2020 after a $10 million renovation project.

The Hall will host an open house from 5 to 7 p.m. Friday night to allow visitors to see the transformation of the iconic limestone mill into the new home of the Hall of Fame.