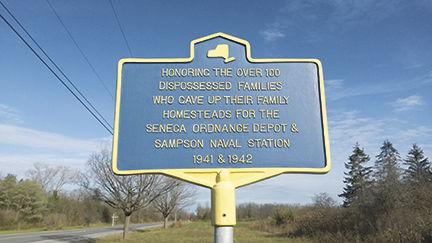 Acknowledging the many dispossessed families, a dedication marker stands on Route 96A alongside the original Seneca Army Depot lands. 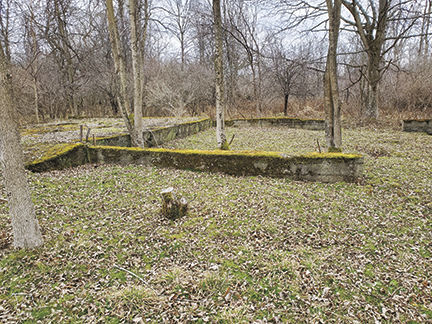 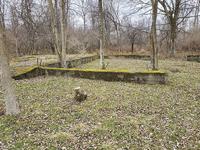 A farmstead barn foundation left after evacuation and razing of one of the many DHP homestead families in 1941. The foundation can be viewed on a tour of Deer Haven Park. 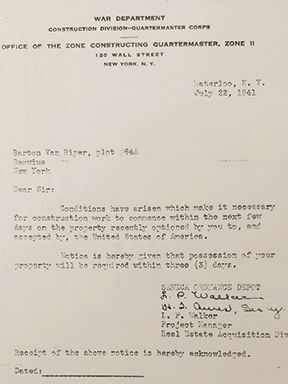 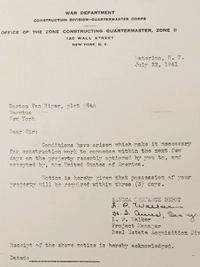 Original 1941 letter received by Barton VanRiper giving him and his wife three days to vacate their premises.

Acknowledging the many dispossessed families, a dedication marker stands on Route 96A alongside the original Seneca Army Depot lands.

A farmstead barn foundation left after evacuation and razing of one of the many DHP homestead families in 1941. The foundation can be viewed on a tour of Deer Haven Park.

Original 1941 letter received by Barton VanRiper giving him and his wife three days to vacate their premises.

Knee-high by the Fourth of July — the farmers’ philosophy of corn height in predicting a good crop. This particular July eight decades ago indicated a good harvest. Gardens boasted green tomatoes on the vine and fruit dappled neighboring orchards. Vineyard grapes were thriving.

Housewives gathered berries for jams and pies outdoors as they bellowed to their children who were running the rolling acreage with yelping dogs in tow. Free range chickens pecked at unseen farmyard tidbits within lush green grasses, strutting unperturbed. Later, many chickens from various coops would be loaded up for buyers far and wide. These would travel via the Lehigh Valley Railroad; but for now, the horses were being harnessed by the men to wagon eggs, dairy, and homemade products to the local market. Money and resources were scarce, and time was of the essence to make ends meet while awaiting crops to ripen, promising yet another payday.

Daffodils and lilacs had died off, leaving a lingering fresh scent upon warm breezes that tickled drying clothes as they hung on backyard lines, sheets billowing like flags in the wind.

It was 1941 and for the 162 farm homesteads across middle Seneca County’s 11,000 acres of vast landscape, life was settling in for the heat of summer ...

On Tuesday, July 22, 1941 one such homeowner, Barton VanRiper, was notified that his home and acreage would be taken into possession of the U.S. government’s Real Estate Acquisitions Division for the Seneca Ordinance Depot. Barton’s wife, Emily Lisk VanRiper was six months pregnant with their first child.

They had three days to vacate their premises.

Barton’s father and brother were nearby farmers; their wives, children, livestock, farm equipment and personal possessions all needed to be vacated as well.

Some neighboring farms received three-week notices, others a few days to two weeks. Nonetheless, families who purchased their property from parents or grandparents to raise their own families nearby were all now forced to leave together ... to who knew where? What of the crops? The livestock? What would happen to the church? The cemetery?

Another family, John and Edith Lisk, also had a mere three days to vacate their 100-year-old home and 157-acre farm they had worked for over 30 years. The shock of it all could not possibly have had time to culminate as loved ones must have sat in silent, numbing disbelief that all their hard work in planting crops, fruit trees, berry bushes ... all their Depression Era pinched funds invested needed to be abandoned.

Imagine, all the homes, barns, and small blacksmith and livestock businesses many families had built; the memories of births, celebrations and even loss held within the surrounding walls that made a house a home, all needed to be relinquished. And quickly at that.

Many were still gathering personal items while War Department bulldozers were razing houses and barns. Crops were burned to the ground, as were all vineyards, trees, any leftover personal possessions, all remaining barnwood — everything.

Dispossessed families were typically offered a meager $1.50 per acre, their homes purchased for half of their total worth. Incredibly, many families would not receive payment for months.

Alas, 80 years ago this month, the land beyond the fence at Deer Haven Park was ravaged by mankind for mankind. All to build an ammunition storage facility under the auspices of a federal government whose Defense Department’s undertone foreshadowed upcoming war. An inkling soon to prove factual. A page in history whose memory still reverberates to this day, like waves hitting the lakeshore of time, ever to linger in the hearts of those whose lives it touched.