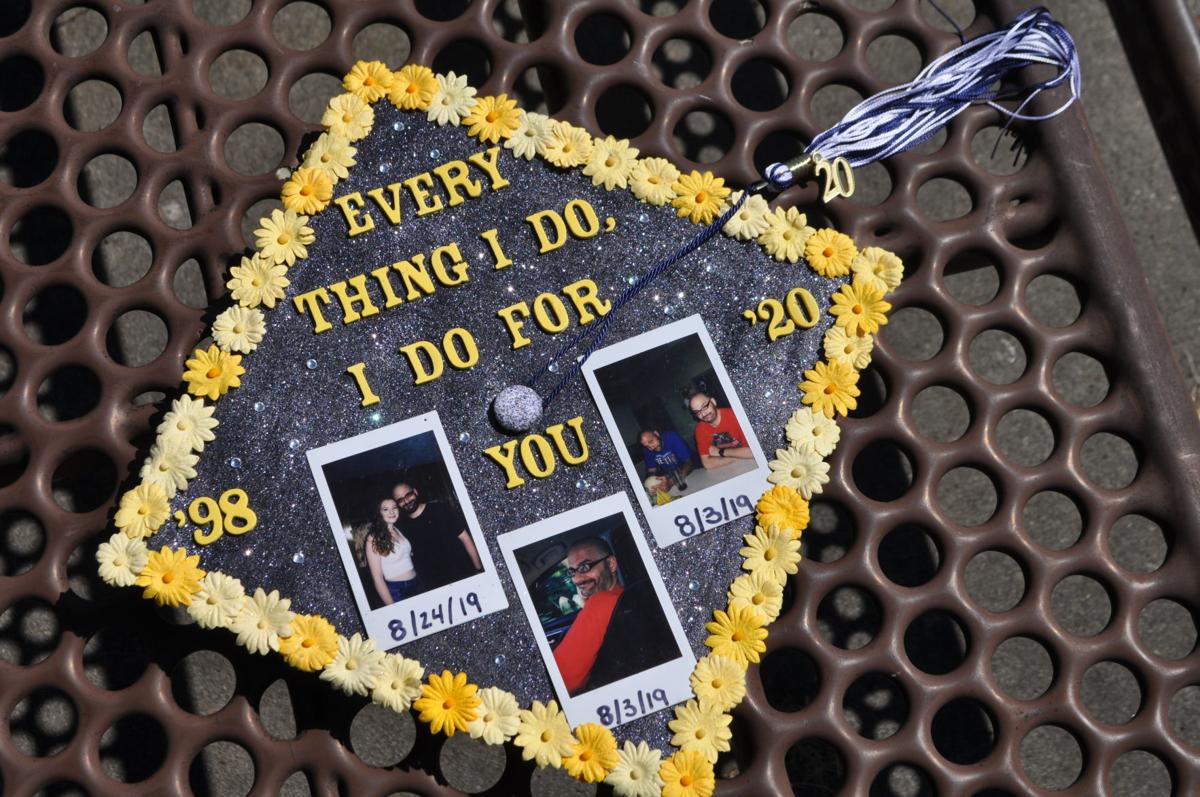 Camille Macina decorated her mortarboard in honor of her late father Joe, who died in mid-March at age 40 of a brain tumor. 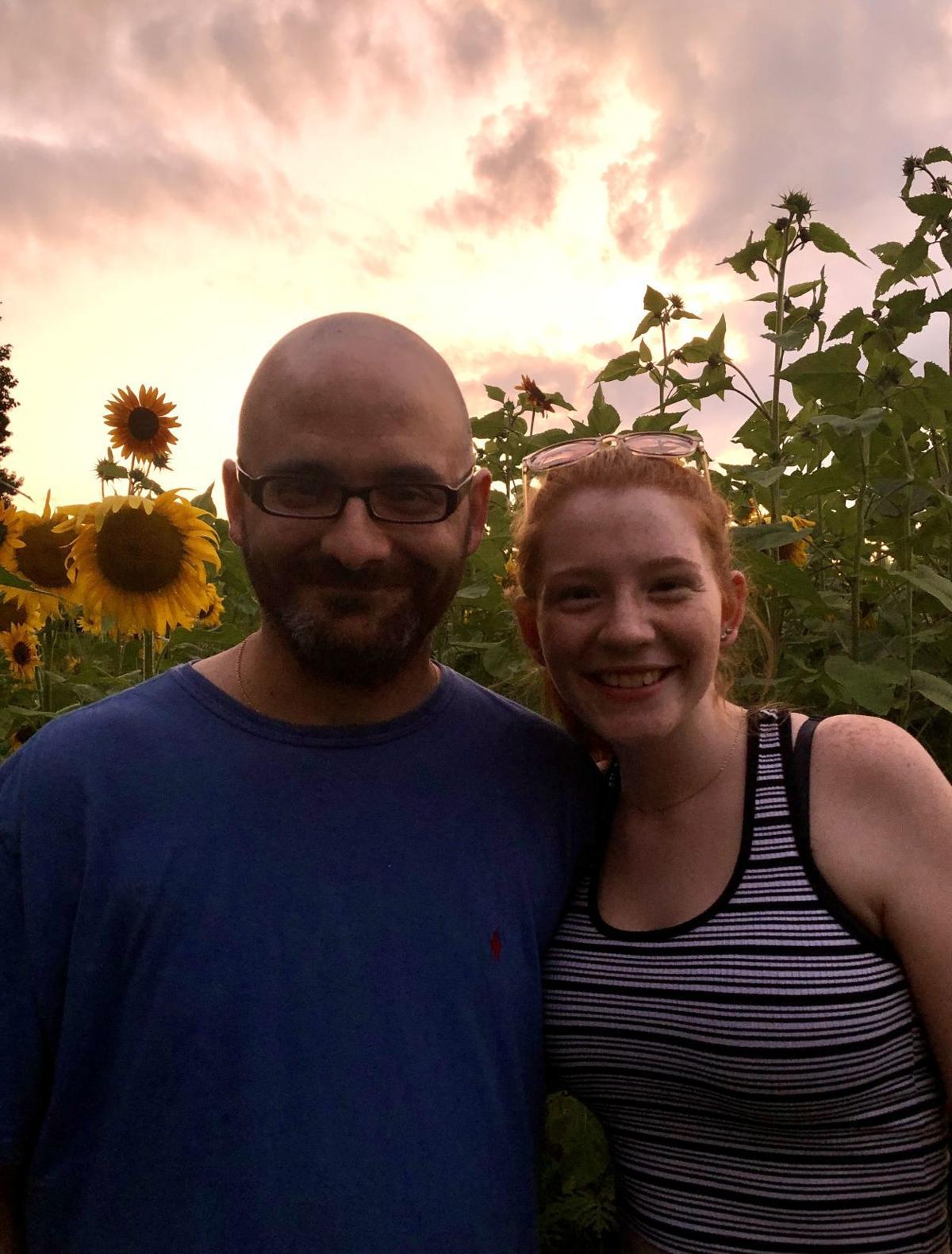 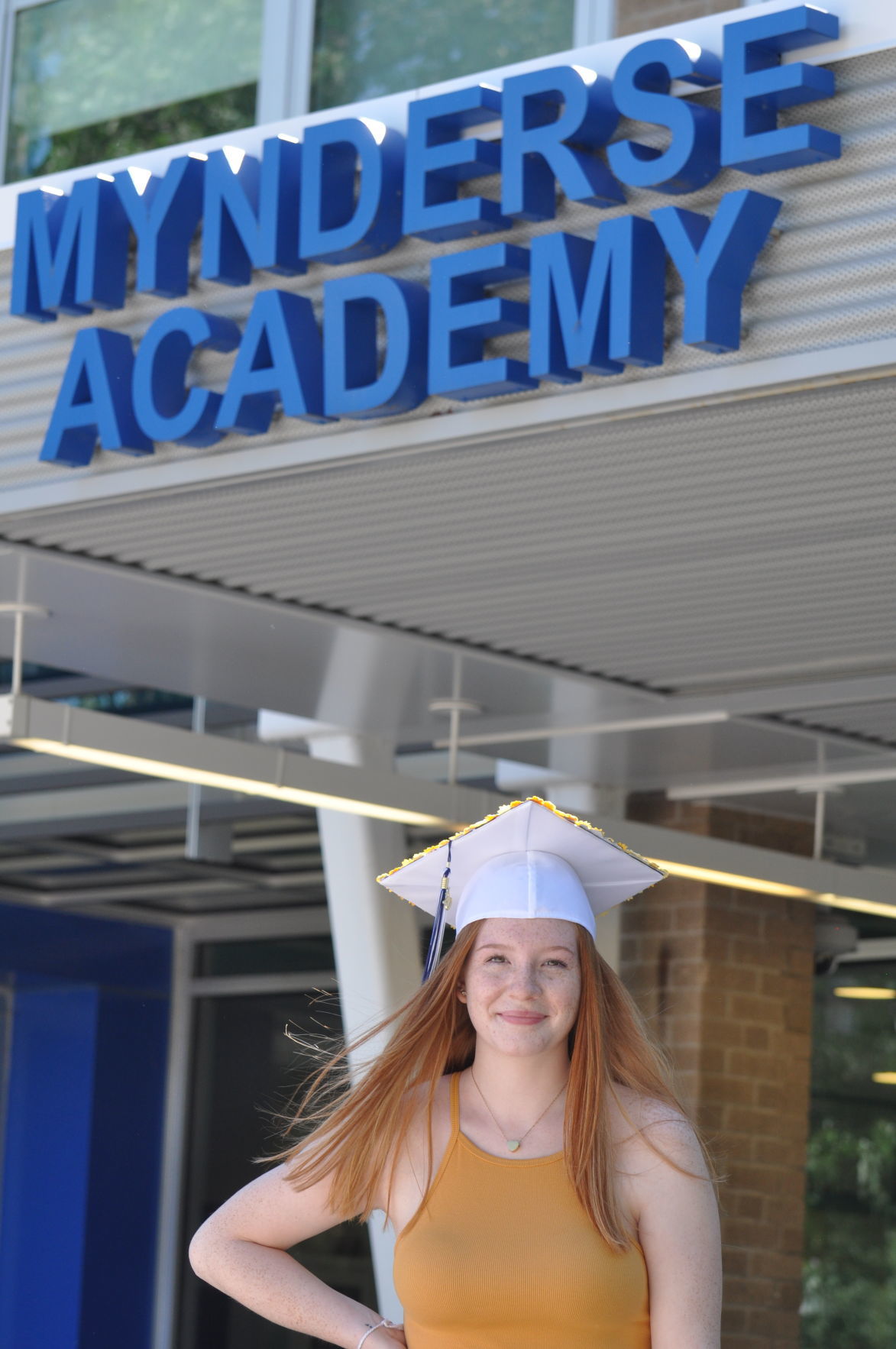 Camille Macina, outside the doors of Mynderse Academy. Macina graduated Friday evening. Macina lost her father Joe in mid-March after a year-long battle with a brain tumor. 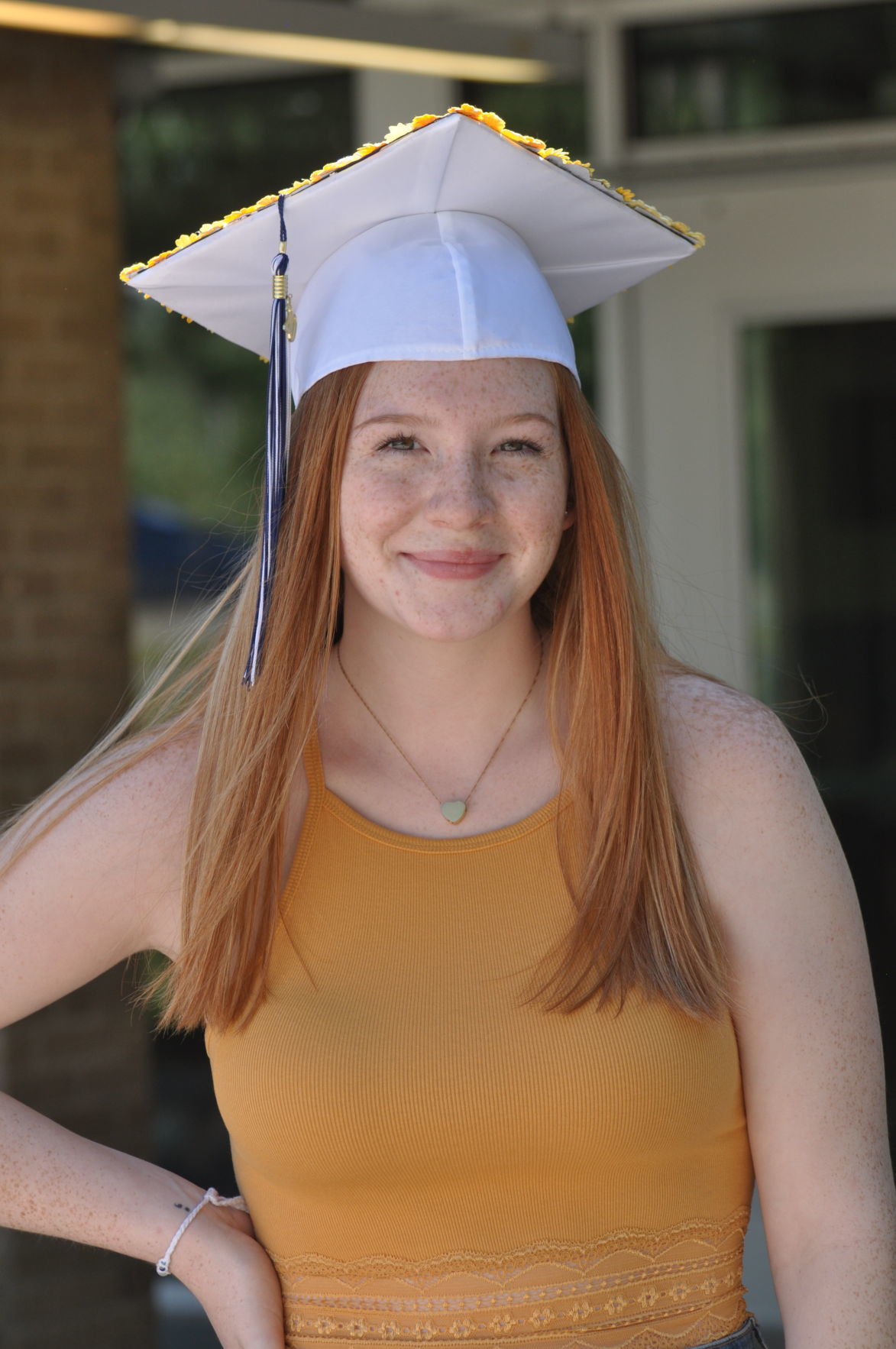 Camille Macina, 18, of Seneca Falls graduated from Mynderse Academy on Friday. She endured despite the pandemic and the death of her father, Joe Macina (above) in mid-March from a brain tumor.

Camille Macina decorated her mortarboard in honor of her late father Joe, who died in mid-March at age 40 of a brain tumor.

Camille Macina, outside the doors of Mynderse Academy. Macina graduated Friday evening. Macina lost her father Joe in mid-March after a year-long battle with a brain tumor.

Camille Macina, 18, of Seneca Falls graduated from Mynderse Academy on Friday. She endured despite the pandemic and the death of her father, Joe Macina (above) in mid-March from a brain tumor.

SENECA FALLS — Members of the high school Class of 2020 lost a lot of little and big things this spring — their final sports seasons, senior ball and senior trip, to name a few.

Camille Macina lost more than that. She lost her dad.

Macina, 18, graduated from Mynderse Academy Friday night — a moment of accomplishment for sure, but a milestone tinged with sadness.

She and her father, Joe, had made a bucket list of the things they wanted to do together as he fought a brain tumor over the past year. On that list was celebrating her graduation. Cancer trumped that wish: Joe Macina died March 19 at age 40, one year after he was diagnosed with glioblastoma multiforme, the most aggressive form of brain cancer.

Camille, however, made sure her father was present on Friday. She wore the heart-shaped locket filled with his ashes around her neck, like she always does. And, she decorated her mortarboard in his honor.

Her favorite color is yellow, so yellow daisies bordered the cap and yellow letters spelled out “Everything I do, I do for you.” She glued on three Polaroid snapshots of her father taken late last summer and the years of both their high school graduations — 1998 and 2020.

Among the “everything” she did for him was graduating from high school.

Camille and her older sister, Lilly, were the ones who took Joe — a single father whose daughters were his entire world — to the hospital in March 2019 after he had been suffering from dizziness, balance problems and the loss of peripheral vision. An MRI showed a large mass in his brain. He was transferred to Strong Memorial Hospital in Rochester, where several weeks later he underwent surgery to remove part of the tumor.

The girls also were the ones to hear firsthand from the doctor following surgery that their father had brain cancer.

“It was really hard to take in the news,” Camille said. “My dad was my caretaker — he was a single father — so that news was shattering to me and my sister.”

With Joe ill and unable to work, the family of three moved in May 2019 from their Seneca Falls apartment to Warners, Onondaga County, to live with his parents, Linda and Robert Macina. Camille left Mynderse at the end of her junior year and enrolled at West Genesee High School, a large suburban school that just graduated 414 seniors, compared to Mynderse’s 84.

It was a difficult transition in an already difficult time. West Genesee was just too different and too big.

“By the fourth or fifth day of school (there) I did not want to go back,” Camille said. “I sat in the bathroom all day until someone came and picked me up. “

Camille told her father she was done, but he convinced her to take her finals and gave his blessing for her to return to Seneca Falls for her senior year. She complied — and passed.

“He understood every little part of everything,” she said.

Not your typical senior year

Camille spent the summer before her senior year working at McDonald’s in Warners, seeing friends in Seneca Falls and frequenting state parks and waterfalls with her father when he felt up to it. She said her father probably visited every state park in New York and “was always chasing waterfalls. It was his favorite thing to do.”

Come fall — as her father recovered from a gamma knife radiosurgical procedure and underwent chemotherapy and radiation — she moved in with the Pierce family (fellow graduate Jewlie Pierce is among her closest friends). Camille got a job at the local Parker’s restaurant, returned to Mynderse and BOCES classes (for education professions), and visited her father on the weekends.

It was hard to be away, and Camille said she sometimes struggled with guilt — especially when her father would routinely text “good” when she asked how he was feeling, knowing from her grandmother that dad was not feeling well at all.

“He just wanted me to be happy, to do what I wanted and not be miserable at a school I didn’t like,” she said.

Being happy was possible in large part because of the Pierces, supportive friends she calls family, and a cadre of teachers and staff who kept an eye on her.

“Obviously I’m not their biological kid but they treat me like I am,” she said. “Jewlie’s mom is everybody’s mom.”

Her science teacher, Barb Reese, reached out shortly after her father’s diagnosis with a batch of homemade bread and was always so kind to her when they crossed paths in the school hallway, Camille said. This year, senior advisor Chris Crawford became a friendly face after Camille designed the senior T-shirt. Crawford told her a donor had given money for a student to go on the senior trip, and she was deserving of that gift given all that was going on in her life.

“I thought that that was really, really nice of her,” Camille said.

English teacher Bill Morey was close with Lilly, and when Camille started high school as a shy freshman she began eating lunch in his office. This year she finally had Morey as a teacher and said she actually began avoiding him because of overdue assignments.

The end amid COVID

Although an MRI two or three months prior showed a shrinking tumor, in late February Joe Macina was not feeling well and falling. When he was taken to the emergency department, Camille said she dropped everything and went to Syracuse. That was the last day she set foot in Mynderse Academy as a student.

Doctors informed the family that Joe’s cancer had spread to the other side of his brain. Camille spent the next weeks in the hospital by her father’s side, leaving only for showers at her grandparents’ home or for a meal out in Syracuse when her friends came and cajoled her into a break.

“It bothered my family that I wasn’t leaving, but there was no leaving,” she said.

As her father’s condition declined, the background din of the COVID-19 pandemic intensified. The hospital started limiting visitors and soon told the family they had to make a decision about Joe’s final days if they wanted to be with him.

On March 18, he was taken to his parents’ home in Warners, where a hospice team had set up a hospital bed. By that time he was not talking and only reaching out and squeezing loved ones’ hands, Camille said.

Since he was settled, Camille decided to return to Seneca Falls for the first time in weeks. Later that evening, she got a call from her grandmother that her father was struggling. She hopped in the car and made the now rote drive to Warners.

“As I walked in the door he took his last breath,” she recalled. “It was so sad. It was horrible.”

Because of COVID, the family was unable to have a service. Camille and her sister chose to have their father cremated; some of his remains are in her heart locket. Joe wore an Italian horn on a chain around his neck that his daughter would wear whenever he underwent treatment. It was lost during his hospital stay, which greatly upset Camille. But the locket now around her neck gives her comfort.

The family had planned a celebration of life June 10, Joe’s 41st birthday, but large social gatherings were still prohibited, so Camille and several family members found a waterfalls and spread some of her father’s ashes there.

After her father’s death, Camille prayed school would reopen because it would have provided an anchor of normalcy — but again, COVID stood in the way.

“I had to sit in my room and do homework,” she said. “It wasn’t the same as being in school. It was a hard year in every aspect.”

Camille said it was her father’s last wish for her that she graduate, and she’s actually surprised she did, given the number of absences she incurred. She barely did any work during the third quarter when he was in the hospital and found herself with no motivation after his death.

She persevered, though, thanks in part to the support of teachers, her closest friends Jewlie Pierce and Liz Liscum, and the nudging of Gina Pierce, who also promised Joe she would help his daughter reach the high school finish line.

“That was his main thing,” Pierce said. “That’s all he wanted her to do.”

When Camille was struggling, Pierce said everyone pulled together for her — and Pierce herself got a little tough.

However, perhaps the greatest motivator was realizing her father’s expectations.

Eric Hampson of Newark was Joe’s coworker at G.W. Lisk who became a close friend and “uncle” to the Macina girls. He said Joe had a passion to be the greatest father he could be and believes his love for his daughters nourished strength in Camille when she needed it most.

“She proved everybody wrong,” he said. “She stepped up and proved how strong she was.”

After Joe’s death, Hampson said Camille spent countless hours in the midst of grief trying to catch up so she could graduate because it was a promise she made to her dad.

“That shows the parenting skills of Joe; how much he influenced her and how much she respected him,” he said. “I told her how proud I was of her keeping her head up and keeping on going.”

As she sat outside Mynderse Academy on Wednesday, Camille had mixed feelings about the Friday night ceremony. She was happy to have been put in the second group of graduates to receive their diplomas so the Pierces could watch both her and their daughter. But graduating without her biggest cheerleader in the stands nagged at her.

“If he were here I think he would be really proud of me,” she said. “He’d look at me with the biggest smile on his face that I made it to graduation.”

What she’s really looking forward to, though, is her opening up her yearbook when it arrives. It’s a tradition for parents to send a baby picture of their graduate along with a parting message as they take those first few steps into adulthood ... steps Camille Macina had to take painfully early.

Her father submitted his message in secret.

“I’m really looking forward to seeing whatever he said,” she said.