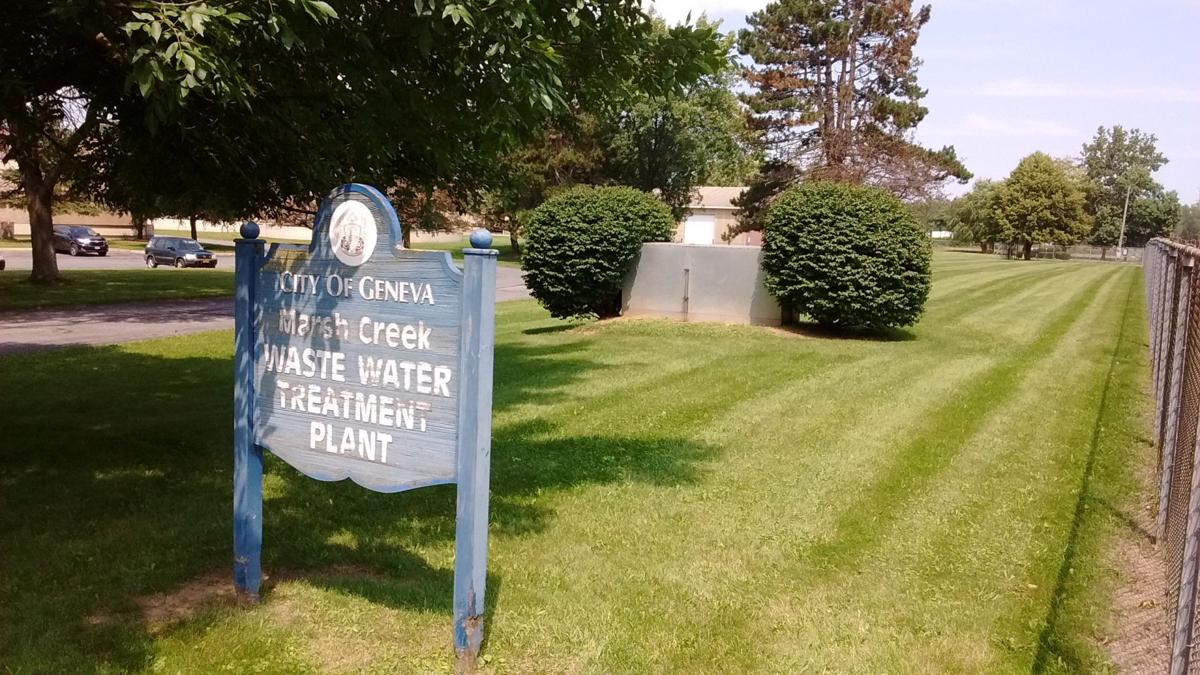 A pump station failure at the city of Geneva’s Marsh Creek Wastewater Treatment Plant on Doran Avenue in early August resulted in an estimated 5,000 gallons of untreated sewage emptying into Seneca Lake. It also resulted in the closure of the beach at Seneca Lake State Park. 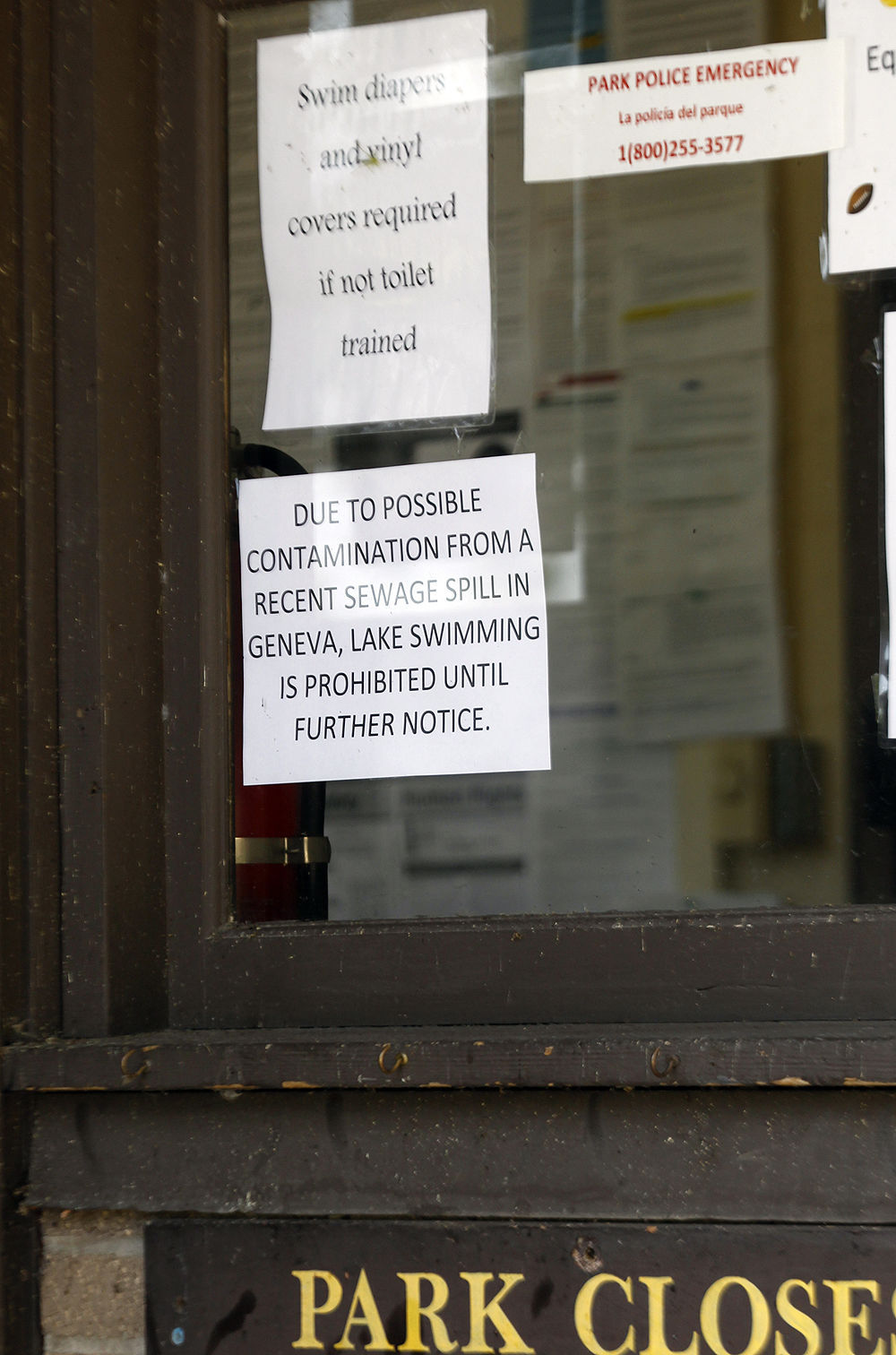 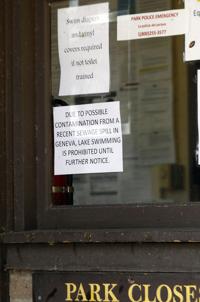 A sign is posted at the entrance booth at the Seneca Lake State Park signaling that the beach there is temporarily closed due to testing as a result of the recent spill at the waste treatment center in Geneva.

GENEVA — A discharge of an estimated 5,000 gallons of untreated sewage in a creek that empties into Seneca Lake resulted in Seneca Lake State Park officials shutting down swimming at the designated beach on Sunday, two days after the spill was reported.

State environmental and parks department officials did not return requests for comment on the spill on Monday, which happened early Friday morning when a pipe at a pump station near the city’s Marsh Creek Wastewater Treatment Plant on Doran Avenue failed.

“Due to possible contamination from a recent sewage spill in Geneva, swimming at Seneca Lake State Park will be prohibited until further notice,” said the park. “A water sample from our beach area has been taken to the lab for analysis. The test for E-coli bacteria takes 24 hours from the time the lab receives the sample. We expect to hear from the lab before 10 a.m. Tuesday morning.”

The results of the testing were posted Tuesday at the state Department of Park’s Recreation and Historic Preservation’s website, and it was deemed “clear after resample,” and the beach was reopened. A sample on Aug. 2, prior to the spill, indicated acceptable levels of  E.coli at 133 colonies per 100 milliliters, which is below the state maximum of 235 E.Coli colonies per 100 milliliters. The presence of E. coli in water is a strong indication of recent sewage or animal waste contamination.

According to the parks department’s website, beaches are closed “when there is a known or anticipated risk to public health or safety.”

The department said “closure decisions are based upon monitoring results in combination with other factors that influence water quality,” including sewage overflows.

However, Seneca Lake Park said on its Facebook page that it had not been alerted about the discharge until park patrons informed them on Sunday morning and that they could not confirm the spill until that afternoon.

City Manager Matt Horn said on Monday that his office did not reach out to the park, saying it had followed state Department of Environmental Conservation procedure by reporting it through the alert system.

Horn said the pipe failure at the two-year-old pump station adjacent to the Marsh Creek plan goes back to overnight on Wednesday of last week, when a pipe at a pump station that brings untreated wastewater into the plant failed. Horn said there was no discharge of raw sewage during that incident. City plant workers installed an above-ground pipe to send the sewage into the plant, and that one ultimately failed as well.

Workers Friday morning saw “bubbling” at a nearby manhole, which Horn said indicated that raw sewage was being emitted into the nearby creek.

“Our remedy failed on Thursday, and that’s what caused the backup,” he said.

Officials guess that about 5,000 gallons seeped into the creek, which eventually crosses Routes 5&20 and into Lakefront Park, where it discharges into the lake. The city’s treated wastewater is discharged into Seneca Lake through a long pipe, not Marsh Road Creek, said Horn.

As for the spill affecting shoreline water quality, Horn doubted the estimated 5,000 gallons of untreated sewage would have a big effect on such a deep lake. However, he noted the typical lake water current tends to take city wastewater discharges toward the Seneca-Cayuga Canal, which is east of Seneca Lake State Park’s beach.

He said water testing by the state would be prudent to ensure the safety of swimmers.

“If I had a beach there, I would want to see it tested,” he said.

Some critics, including Jim Meaney, author of the blog “Geneva Believer,” have claimed that the city could have done more to communicate the spill to residents. The city has been criticized for its alleged lack of communication regarding the Geneva Foundry contamination.

He said he could not comment on whether the DEC should have communicated with Seneca Lake State Park staff about the raw sewage release.

Horn said the city has been in communication with the DEC about the spill, but as of Monday, no officials from the agency’s Region 8 headquarters in Avon had been on site.

Since PVC piping appears to not be holding up, said Horn, the city is looking for a stronger material capable of handling the pressure from the pump.

“We are not at a permanent fix,” he said.