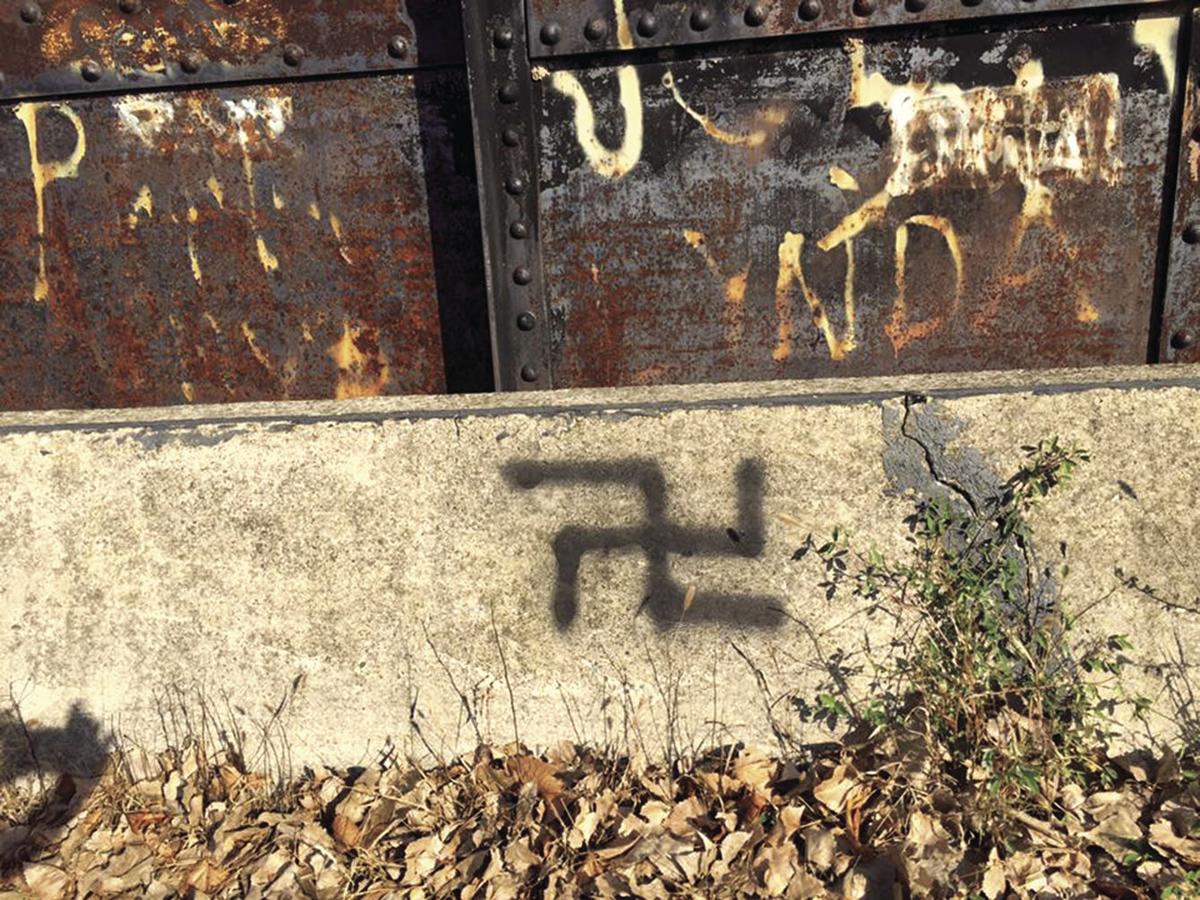 A swastika has been scrawled on a railroad bridge near the Cayuga-Seneca Trail in the town of Fayette. 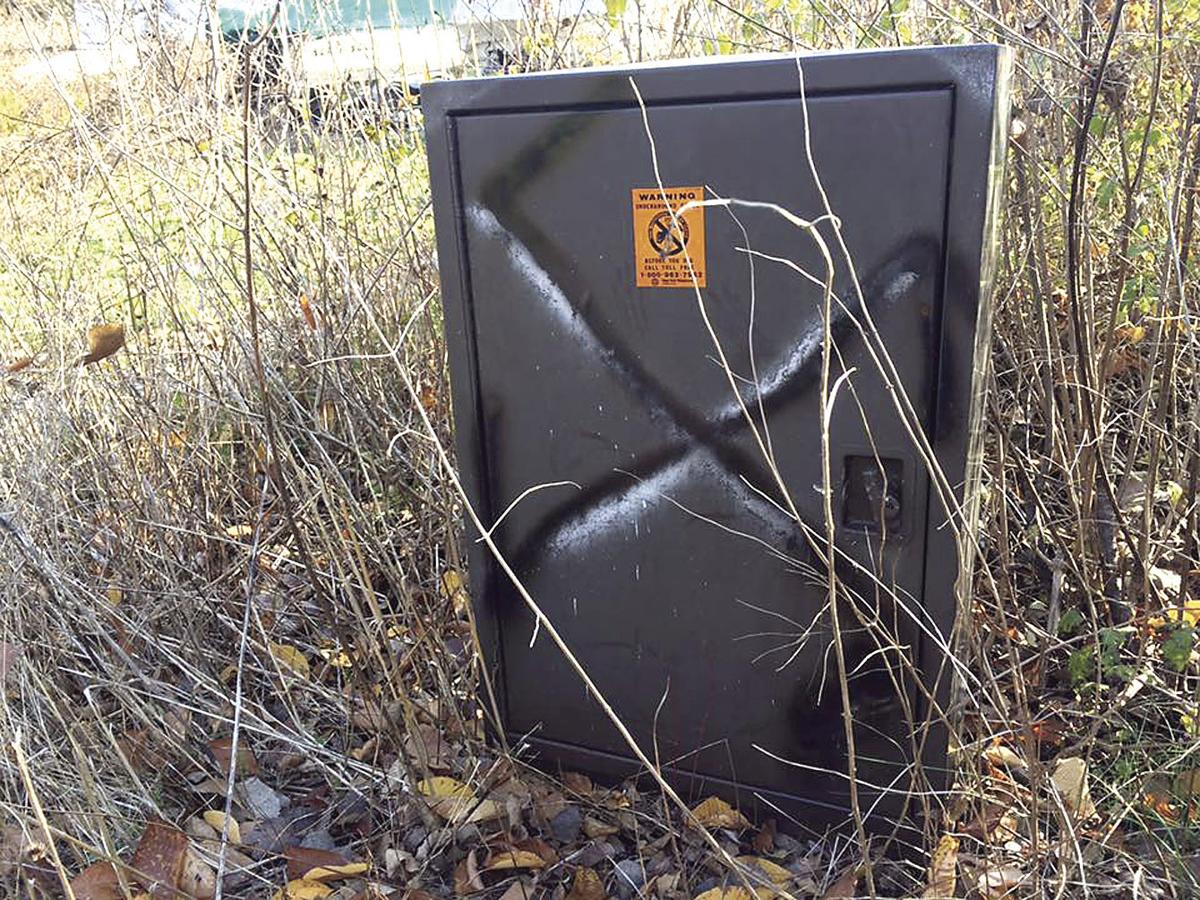 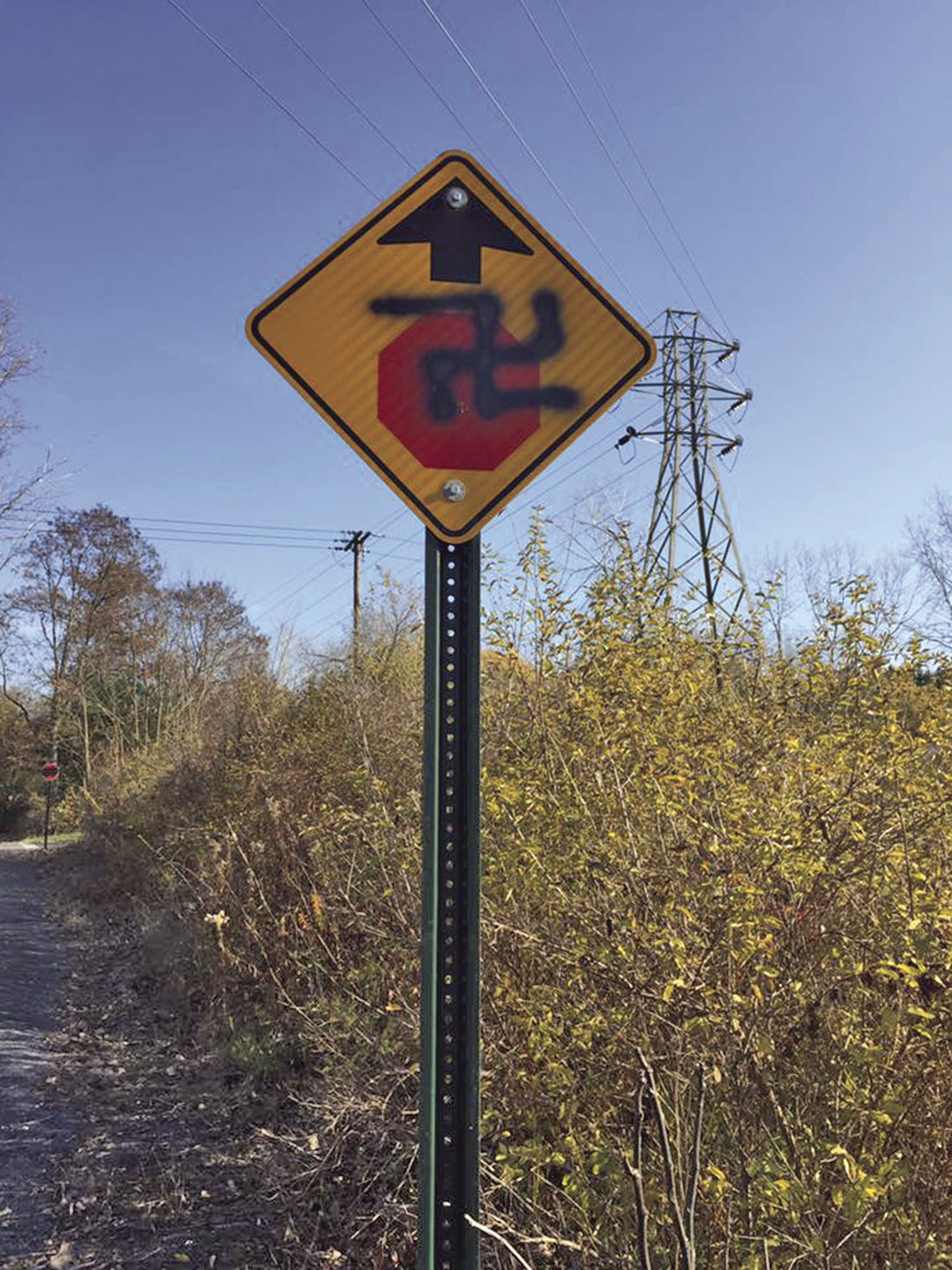 A swastika has been scrawled on a railroad bridge near the Cayuga-Seneca Trail in the town of Fayette.

FAYETTE — Heather May looks at her runs on the Cayuga-Seneca Trail as a chance to get away from it all.

However, while jogging the week before the election, she saw something that brought her back to reality: a Nazi swastika painted on a power box.

A couple of weeks later, two more swastikas appeared, one on the rail bridge near the end of the west end of the trail, the other adorning a sign along the trail.

May, who chairs Hobart and William Smith Colleges’ Theatre Department, said she has no doubt the Nazi signs are in response to President-elect Donald Trump, who received support during the campaign from ultra-right wing organizations, including white supremacist groups. Those groups have publicly celebrated his victory over Democrat Hillary Clinton.

She said the appearance of the symbols and Trump’s election are no coincidence, pointing to some members of Trump’s “advisory circle” as evidence. May said that includes Breitbart News Network executive Steve Bannon, who Trump tapped as his chief strategist after leading the Republican’s successful presidential campaign.

Bannon is considered part of the “alt-right” movement through his news and commentary website, Breitbart News, but denies he is a white nationalist or supremacist, as May and others allege.

“I think he has white nationalist sentiments,” said May, an Indiana native.

“(Trump) has sent a very clear signal,” by giving Bannon a White House job, she added.

Trump has denounced the hate messages that have surfaced during the pre- and post-election periods.

“If it helps, I will say this, and I will say right to the cameras: Stop it,” Trump said on CBS’ “60 Minutes” Sunday.

However, May insists Trump hasn’t done enough to condemn the messages.

Since Trump’s election there have been hundreds of reports of racist messages throughout the country, including New York, according to reports from organizations including the Southern Poverty Law Center. In response, Gov. Andrew Cuomo has directed state police to create a new Hate Crimes Unit to investigate and offer assistance to other police agencies looking into potential hate crimes.

As far as May is concerned, the Nazi graffiti qualifies — and she wants it removed. She also wants her leaders, including Rep. Tom Reed, R-23 of Corning, to denounce the messages as well.

May said she informed Fayette town officials of the Nazi graffiti through their website, but did not report it to any police agencies.

Seneca County Sheriff Tim Luce said he had not received any reports about graffiti along the trail. A deputy is being assigned to investigate, he said.

May said she also contacted the office of Congressman Tom Reed, R-Corning, because she wants her leaders to denounce such acts.

Reed did so on Tuesday.

“Let's be clear,” said Reed. “Violence and discrimination have no place in American society. We support freedom of speech, but anyone whether from the right or the left advocating violence and destruction will not be tolerated. I hope they identify these offensive vandals and bring them to justice. Part of what makes our country great is our right to disagree without resorting to these kinds of tactics. We care about bringing our country together. Its only right that we move beyond our political differences and begin to focus our efforts on creating jobs and creating a more prosperous and inclusive nation — for everyone.”

Vince Scalise, president of the Cayuga-Seneca Trail Association, said he had not heard about the graffiti either, but said the group would be looking to remove it.

“That’s a sign of the times we’re living in,” Scalise said. “Hopefully, it’s an isolated incident. Who knows what’s in the minds of some people.”

Scalise said the trail is designed to bring “enjoyment and exercise,” and finds it sad that someone would deface it with symbols of hate.

May said the Nazi symbols on the path have shattered her sense of security — and she doesn’t plan on running alone anymore.

“It makes me feel less safe,” she said.

Scalise said she and others shouldn’t be concerned.

“It’s a beautiful trail, and a lot of people love it,” he said. “I wouldn’t be discouraged by a couple of hoodlums.”