Joe Venuti (middle), director of the Department of Public Works for the city of Geneva, has turned over the keys to the new Geneva Resource Recovery Park to Jacob Fox (left) of Closed Loop Systems. Fox will manage the facility that features vermiculture (worm) composting and eventually will offer recycling and trash transfer station for city businesses and residences. At right is DPW staffer Steve Horton. They are seen in front of the composting trenches, where worms and microorganisms will break down organic materials, including food waste. 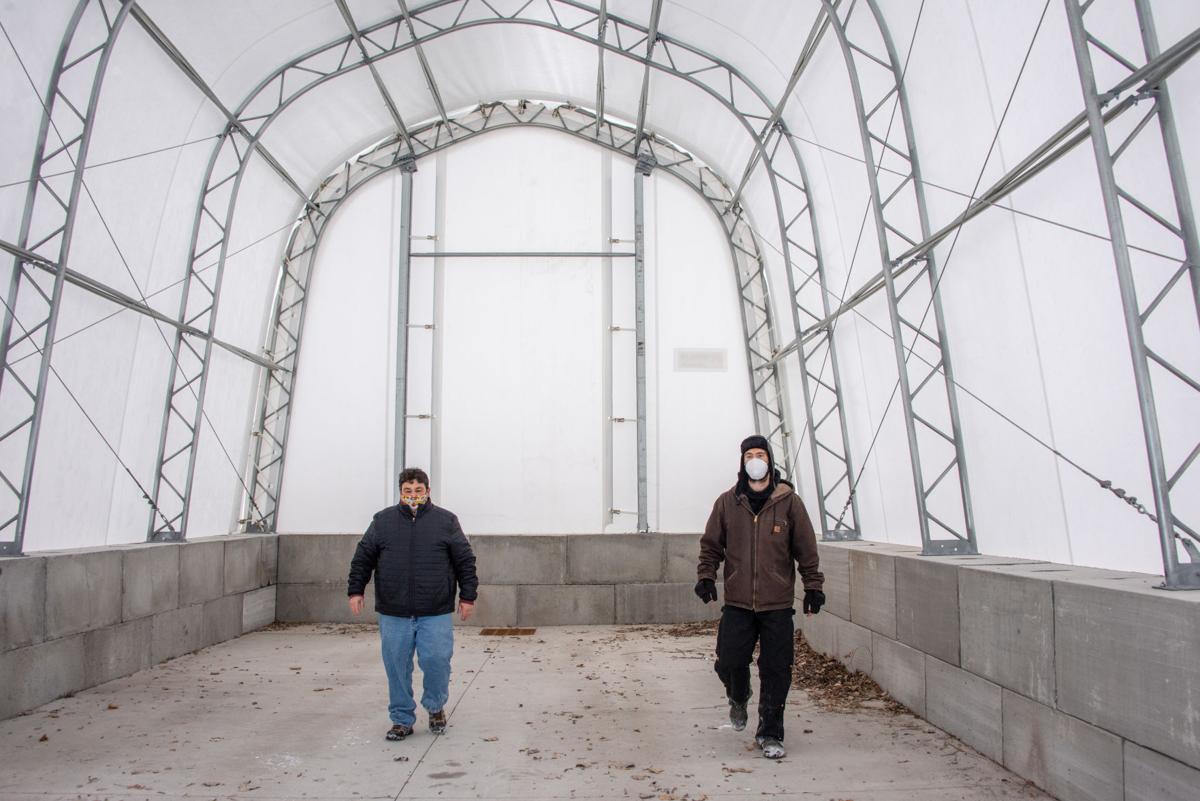 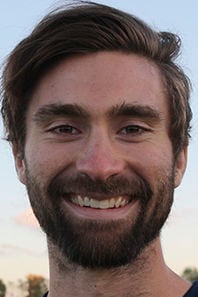 Joe Venuti (middle), director of the Department of Public Works for the city of Geneva, has turned over the keys to the new Geneva Resource Recovery Park to Jacob Fox (left) of Closed Loop Systems. Fox will manage the facility that features vermiculture (worm) composting and eventually will offer recycling and trash transfer station for city businesses and residences. At right is DPW staffer Steve Horton. They are seen in front of the composting trenches, where worms and microorganisms will break down organic materials, including food waste.

GENEVA — Most of us don’t give much thought to what goes into our garbage can. From old takeout to dried-up leftovers that got pushed to the back of the fridge, Americans chuck plenty of uneaten food into the trash each day. That’s in addition to what’s left from the things we do eat, ranging from fruit peels to meat bones.

Jacob Fox wants us to think more about what we throwaway each day — and he is opening Closed Loop Systems, an organics recycling operation near the city’s sewage treatment plant on Doran Avenue, in an effort to address the problem.

In the average 32-gallon garbage toter, 54% of the material is biodegradable, said Fox, the company’s CEO. That means it could be converted into material that farmers could use to fertilize their fields and folks could use in their gardens. Instead, it’s mostly ending up in mega-landfills such as Seneca Meadows and Ontario County, where it produces methane, a contributor to global warming. And, when methane mixes with other landfill gases, it produces the stink that residents in Seneca and Ontario counties know all too well.

“(The landfills) only stink because of the organics,” said Fox, noting that 16% to 20% of landfill garbage is food waste, the smelliest stuff in your trash.

Fox is part of the movement trying to change that. Sometime soon — he’s working out the final details with the city of Geneva — residents and businesses will be able to take their food waste, paper products, and other biodegradable debris to a recently constructed organic food waste operation on Doran Avenue called the Geneva Resource Recovery Park. There, in two bays, worms and micorganisms will work to break down food waste, paper products, and organic yard waste.

“(The worms and microorganisms) get free room and board,” Fox joked.

The city project goes back several years. Fox, a Hobart College graduate and Texas native, secured grants of $240,000 from the state Department of Environmental Conservation and $169,000 from Ontario County to build the vermiculture operation.

He cut his teeth at Organix Green Industries, a vermiculture facility on County Road 4 in Seneca, and said the Geneva location, which will be open to city and town residents, will serve as a model for communities around the nation.

“(Closed Loop Systems) wants to build a lot more,” Fox said. “I’ve pitched it to 25 communities in New York and 10 outside of the state. Everyone has the same problem that Geneva has.”

He said it’s up to all of us to do our part if we want a future without landfills.

“We need our own local solutions,” he said. “We need to handle our own problems.”

The benefits are economical as well as environmental, he noted. Not only are farmers getting high-quality compost that helps rebuild topsoil, residents may be able to reduce the need for weekly trash pickups.

City and town residents will be able purchase $15 tags that are good for a year; they can hang the tags in their cars. For every bucket brought to the Geneva Resource Recovery Park with food and other biodegradable waste, residents can get a bucket of compost, if they want one.

“We also plan to sell 5-gallon buckets for those who don’t have them, but we do not require you to use our bucket,” Fox said.

When fully built out, the transfer station will be a one-stop shop, from trash collection to recycling.

“Once the transfer station piece is together, they can expect a metal bin, zero-sort recycle bin, landfill bin, construction and demolition debris bin, organics collection and yard waste collection, with the goal to do more for all the different waste streams and as markets emerge,” he said.

An opening date has yet to be finalized, Fox said, although he expects it will be early February. Once open, hours will be 8 a.m. to 5 p.m. weekdays and 10 a.m. to 4 p.m. Saturdays.

Fox and Assistant City Manager Adam Blowers describe the operation as a great example of a public-private partnership, where both the business and community benefit.

“This is a big win for the city of Geneva, where sustainability is a large focus,” Blowers said. “It is 100% grant-funded, with funds being provided by the DEC and Ontario County. We are extremely excited for what the future holds with a facility like this and hope to keep expanding as more grants become available.”

Blowers said Closed Loop Systems’ contract with the city stipulates the business will pay no rent in the first year, $3,000 in the second year, and $4,000 in the third. The city also will get 500 gallons of liquid extract fertilizer and 25 cubic yards of soil amendment per trench per year, Blowers added.

Fox is hoping to pick up food waste from a number of local businesses and institutions that are taking their collections as far away as Trumansburg.

Closed Loop Systems joins a growing list of local entrepreneurs taking on the collection and recycling of food waste.

Growing Cycle, a Blueprint Geneva initiative that collects food and paper waste in the city for 144 residents and three businesses, is among those excited for the new operation.

“We have been working very closely with Jacob Fox and are excited to be one of the leading compost transfer services within the city of Geneva,” said Julie Coleman, the operation’s business manager. “We will be depositing local food waste into the Closed Loop Systems, effectively diverting it from the landfill and creating matter that can be used to nourish and regenerate local soils.”

Coleman said the fledgling business is working with the West Street School Head Start program and the town of Geneva’s transfer station, which features organics collection among its services.

“We are looking to grow extensively over 2021, increasing to our maximum residential capacity, to continue education and to set an example for all local communities on what can be done if residents rally around a positive effort,” Coleman said.

“Customers just need to fill it up with any food and paper waste — minus wax-covered paper and receipts, because they tend to have BPA (bisphenol A) — leave it by the curb on pickup day, and we do the rest,” Coleman said.

Jackie Augustine, who heads Blueprint Geneva, said Growing Cycle is “not only focused on diverting food waste from the landfill and doing our part to reduce odors, but also to providing meaningful opportunities for local people who might struggle to find employment to serve their community. That’s part of the growing cycle — local people solving local problems.”

“We all want to stop the need for landfills,” Camera said. “It fits into the grand scheme of where we are going in the state.”

Like Fox, Camera hopes many communities can create recycling operations for food waste and chip away at the volume going to landfills. However, Camera acknowledged that if places like New York City don’t take steps to reduce food waste, it will be difficult to shut down landfills that rely mostly on garbage coming from downstate by truck and train.

Camera has some worries, including the financial viability of Closed Loop Systems, as well as potential smells from the Doran Avenue site.

Fox said there will be no smell, and revenue will be a combination of tipping fees, soil sales, and liquid sales.

“I’m willing to ride the Jacob Fox horse to the promised land,” he said.

The proposed regulations would require composting and the donation of edible food by large food scrap generators to promote an effective reuse of materials otherwise headed for landfills. DEC will hold two virtual public hearings on the draft regulations on April 7, and is accepting public comments on the proposal until April 27.

“Reducing food waste has significant environmental benefits, including creating useful compost and decreasing the amount of materials that would otherwise be sent to a landfill, eventually creating methane gas that contributes to climate change,” Seggos said. “Perhaps even more critical now, when so many New York families are struggling with food insecurity during the pandemic, these proposed regulations support initiatives to connect hungry people with edible food and support organizations like Feeding New York State that are working to reduce hunger in our communities.”

The DEC said the draft regulations would implement the Food Donation and Food Scraps Recycling Act, which goes into effect in January 2022. The regulations implement the act’s requirements for all designated food scrap generators to donate excess edible food and send food scraps to an organics recycler if one is available with 25 miles of the generator. The DEC said the increase in food donations will help New Yorkers in need and result in job creation to assist the not-for-profits that handle food donations. The act also requires generators to recycle food scraps by using organics recyclers (composting facilities, etc.) to reduce the amount of food scraps that would otherwise end up in landfills and ultimately produce methane, a potent greenhouse gas. Composting facilities and other organics recyclers produce beneficial organics soil conditioners that are needed to improve the quality of poor soils and reduce erosion, the DEC noted.

DEC’s draft regulations define a food scrap generator as an entity that generates an annual average of two tons of food scraps or more per week at a single location. These entities include, but are not limited to, supermarkets, food service businesses such as restaurants, higher education institutions, hotels, food processors, correctional facilities, and sports or entertainment venues. The proposal exempts New York City, hospitals, nursing homes, adult care facilities, and elementary and secondary schools.

Full text of the express terms, hearing information, and related information pertaining to the proposed rulemaking is available on DEC’s website at http://www.dec.ny.gov/regulations/propregulations.html#public.

DEC will hold virtual public hearings on the proposed Part 350 regulations on Wednesday, April 7, at 1 p.m. and 6 p.m. via WebEx. The public is invited to submit written comments on the proposed regulations from Jan. 27, through April 27. Written comments can be submitted by email to FoodScrapsLaw@dec.ny.gov or by mail to: ORRS-Part 350, NYSDEC, Division of Materials Management, 625 Broadway, Albany, NY 12233-7253. Please include “Comments on Proposed Part 350” in the subject line of the email.