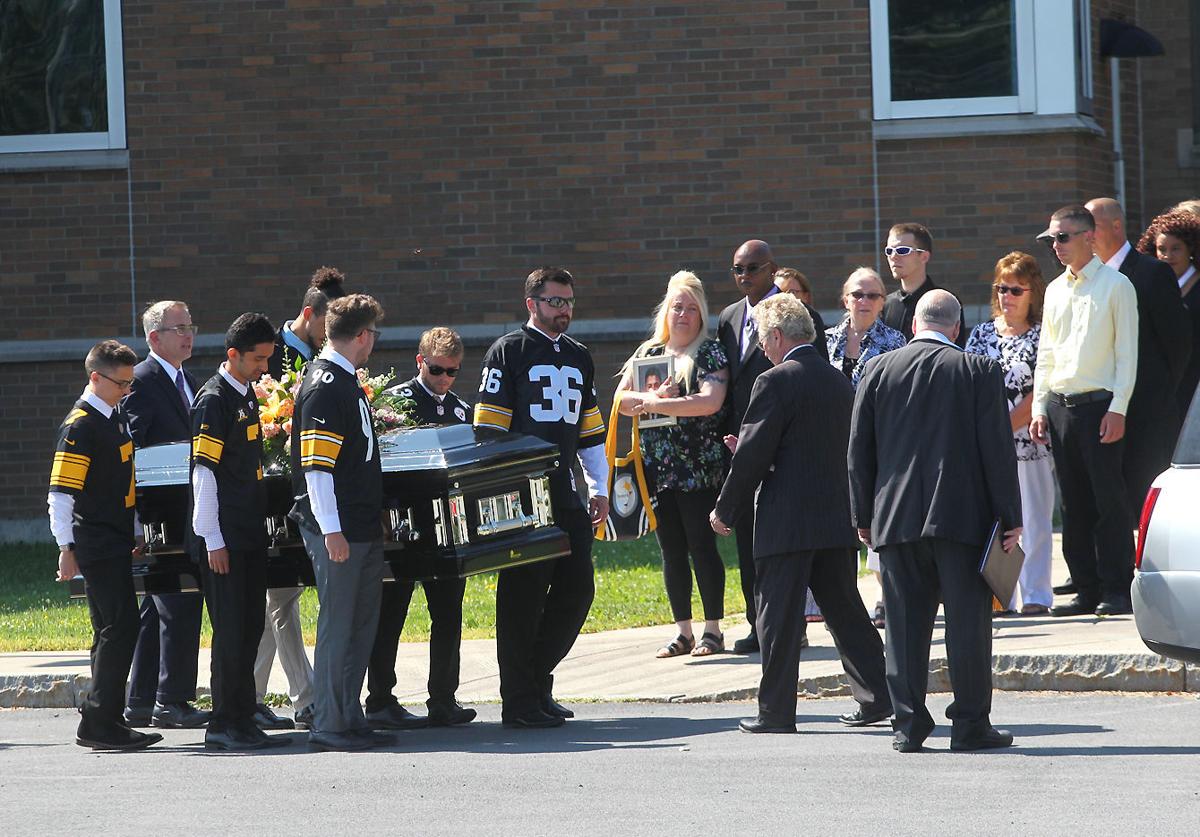 Pallbearers donned Pittsburgh Steelers jersey — Trevor Irby’s favorite NFL team — as they carried his casket out of Romulus High School Thursday morning. The 25-year-old Irby was one of three people shot to death by a gunman July 28 at the Gilroy Garlic Festival in California. 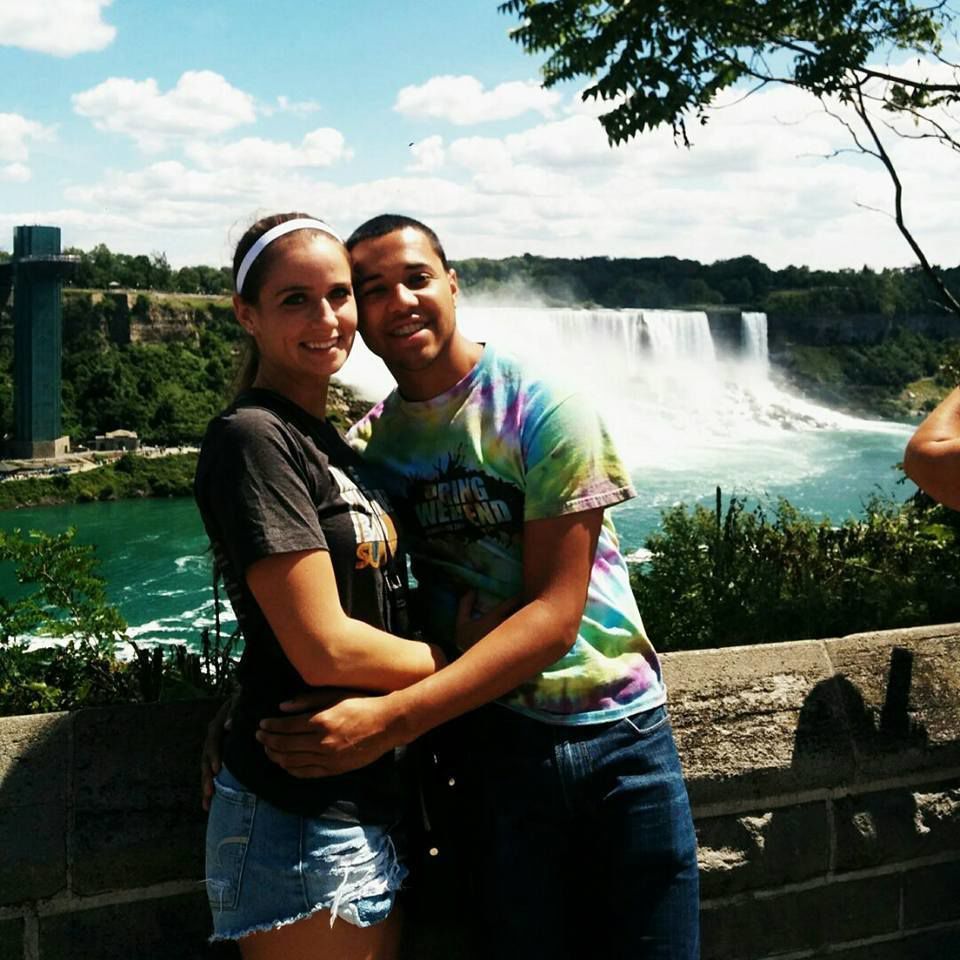 Trevor Irby, a 2012 graduate of Romulus Central School and a 2017 graduate of Keuka College, is seen with Sarah Warner in Niagara Falls on her Facebook page. Irby was among three killed when a gunman stormed a California garlic festival Sunday. Eleven others were injured. Warner was there but was not injured.

Pallbearers donned Pittsburgh Steelers jersey — Trevor Irby’s favorite NFL team — as they carried his casket out of Romulus High School Thursday morning. The 25-year-old Irby was one of three people shot to death by a gunman July 28 at the Gilroy Garlic Festival in California.

Trevor Irby, a 2012 graduate of Romulus Central School and a 2017 graduate of Keuka College, is seen with Sarah Warner in Niagara Falls on her Facebook page. Irby was among three killed when a gunman stormed a California garlic festival Sunday. Eleven others were injured. Warner was there but was not injured.

ROMULUS — So much promise. Gone too early to fully realize it.

Trevor Irby was mourned by a heart-broken Romulus and Keuka College community Thursday, remembered fondly for his character, optimism, energy, potential — and smile.

The 25-year-old Irby was one of three people shot to death by a gunman July 28 at the Gilroy Garlic Festival in California. His funeral service was held in the auditorium at Romulus High School, where he graduated in 2012.

As people quietly filed in, pianist Joanne Gillette played songs from the musical productions Irby starred in while in high school. A photo montage of his life played on a screen, showing a smiling toddler right up to his graduation from Keuka College. The photos often showed him in Pittsburgh Steeler regalia, his favorite National Football League team, including one of him at a Steeler game at Heinz Field.

A Steeler jacket was on display near his casket and long-time friend Tally McDonald, who spoke during the service, wore a Steelers jersey in her friend’s honor. Other photos showed him dancing, running on a beach, enjoying time with friends, posing with Santa and in his baseball and soccer uniforms.

“Trevor was the nicest kid I ever met. He was like family. He was generous and sharing, always putting others before himself,” McDonald told the crowd of several hundred.

“He worked hard at all he did. We were both mentors in high school. I wasn’t good at it, but Trevor was very good at being patient and helping others. He was always optimistic and I found him an amazing breath of life in my world,” she told the mourners.

“His life was way too short. I’m so sorry Trevor. We’re here for you and I’ll remember you the best way I can,” McDonald said. “Go Steelers.”

Irby graduated from Keuka College in 2017 with a degree in biology.

Eric Detar, chaplain at Keuka, said the entire college community expresses its deepest sympathy to Trevor’s family on their loss. Citing mass shootings in Texas and Ohio that followed Irby’s shooting, he said he wished “we could fix this broken world.”

“I knew Trevor well. We shared joy and pain. I can say that his presence at Keuka was felt in every corner of the campus. He was incredibly positive and upbeat, always smiling,” Detar said.

He recalled playing intramural basketball with Irby and commiserating with the ups and downs of his beloved Steelers.

“I urge you to hold on to one memory of him in finding a way of honoring Trevor’s life,” he said.

Irby could “change the dynamic of a room” just by his presence, Detar said, his voice quivering with emotion. “I saw Trevor make an impact wherever he went. His smile was contagious and he made others smile. He saw life as an adventure.”

“He will be missed. He was one of the finest persons I have ever known. I saw him as a son I’d like to have. He was a tremendous friend to so many,” Detar said.

“Trevor was one of my best friends. I could tell you so many stories we’d be here all day. He made me laugh. He was a bright light and epitomized the saying that we should dance like no one is watching,” Wyrosdick said.

“He liked to point out his biceps in his photos and would say ‘the mountains are still there.’”

“He was a great athlete, very competitive. We’d go bowling every Wednesday in our senior year and he treated it like it was the PBA championship,” he said with a grin.

“Not a day will pass when I don’t remember you in some way. Trevor was an incredible person. I loved him,” Wyrosdick said.

The remembrance cards included a photograph of a smiling Irby on one side and a reproduction of a Facebook posting Irby liked. It read:

“Life comes with no guarantees, no timeouts, no second chances. You just have to live life to the fullest, tell someone what they mean to you and tell someone off, speak out, dance in the pouring rain, hold someone’s hand, comfort friends, fall asleep watching the sun come up, stay up late, be a flirt and smile until your face hurts.”

The Rev. Robert Mellgard of the Ovid Federated Church cited those words, calling them “prophetic” in terms of Irby’s short life.

“We should not be here today doing this. It stinks. It’s wrong. But there’s nothing we can do to make it go away,” he said.

Mellgard said he could talk about gun violence and white supremacy and other twisted philosophies that may be behind the recent mass shootings, including the Gilroy incident. Instead, he urged people to love and remember Trevor Irby.

“The further degradation of our world will not separate us from the love of God. God’s love is the only true guarantee in this world. We place Trevor Irby into his loving hands and trust he will receive him. If we believe that, then we are only saying, ‘See you later to Trevor,’ not goodbye,” Mellgard said.

At the conclusion of the service, the six pallbearers all donned Pittsburgh Steeler jerseys and walked the casket out a side door for burial in Mount Green Cemetery in Romulus.

“It’s a tremendous, sad loss for this community. He was the kind of person you would want for a son,” said Bob McCann, president of the Romulus school board as the casket was placed in the hearse.