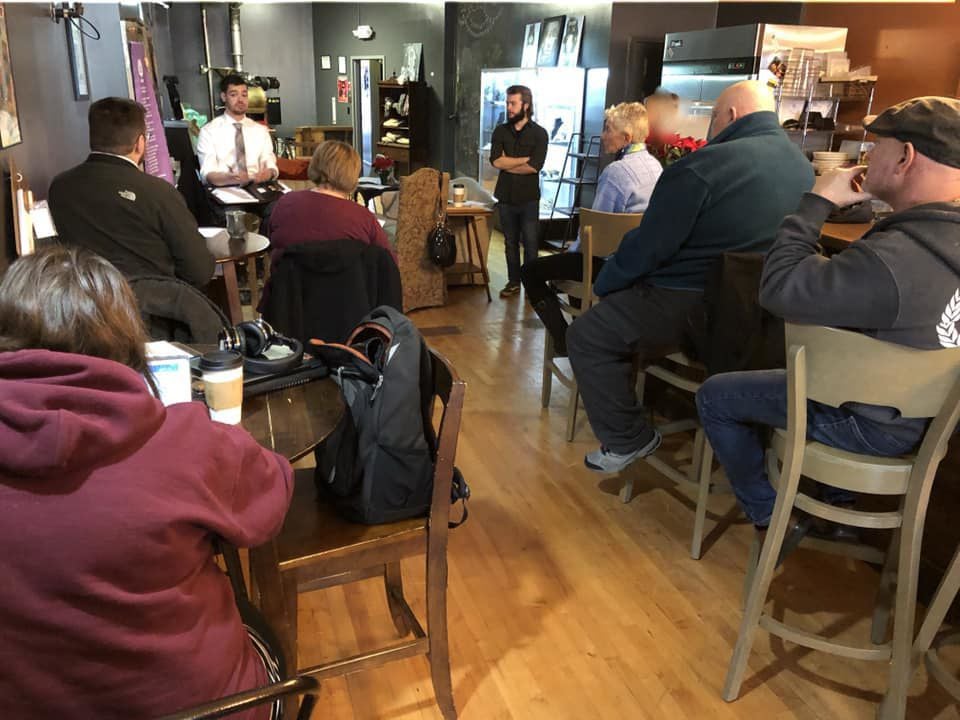 Democratic state Assembly candidate Matt Miller speaks with voters at a recent Meet with Matt event at the Dalai Java on South Main Street in Canandaigua.

CANANDAIGUA — State Assemblyman Brian Kolb hasn’t had many challengers to his job representing the 131st Assembly District. If the Republican decides to run again in 2020, he will have at least one opponent.

Democrat Matt Miller, 24, an Irondequoit native who now lives in Canandaigua, plans to challenge Kolb, who is at the center of controversy over his recent DWI arrest. He recently stepped down from his position as Assembly minority leader position, but has not indicated whether he will run for another term.

Miller began his candidacy last summer and has been holding meet-and-greet events with voters in recent weeks, including the Canandaigua coffee house Dalai Java. He said he hopes to arrange similar events around the district, including Geneva and Seneca County.

Miller said the reception to his candidacy has been positive.

A former member of the New York National Guard, he now works at Ryan’s Wine and Spirits in Canandaigua. Miller said his first choice is to become the district’s next state assemblyman, but if not, he plans to pursue a career in the beverage industry.

He said he became interested in running when he saw so many candidates without challengers in recent elections, including Kolb, who won his first Assembly seat in 2000.

“Even though I am going to be 25, I have a lot of experience of being a regular New Yorker,” he said.

Miller said he was an intelligence analyst in the Guard, which involved gathering information and presenting solutions. It’s akin to the work of a state legislator, he said.

Miller has criticized Kolb on several issues, including those involving the climate. Miller said the changing climate is starting to impact agriculture in the Finger Lakes, pointing to the Seneca County flooding of 2018 as an example.

Miller noted that Kolb was allowed a recommendation for a state climate panel and he chose someone from the fossil-fuel industry, which he believed was counter-intuitive.

He said other issues important to his district include healthcare — in particular, the cost of prescription drugs. Miller noted that Gov. Andrew Cuomo is working on capping the cost of insulin, which has skyrocketed in price over the past few years.

Some Democrats in the Legislature are supporting the New York Health Act, which would provide publicly funded healthcare.

“I am not so much in favor,” he said. “I’d like to see a public option” that he said would compete with private insurance and, hopefully, drive down costs.

Miller said he is a supporter of allowing pharmacists to prescribe a limited number of medications, such as those for HIV prevention, which he said would save money by eliminating the need for a doctor’s visit. California has adopted such legislation, he said.

As for gun reform, Miller generally supports the SAFE Act, which has come under criticism by some pro-gun groups. As a former member of the military who has extensive experience handling firearms, Miller doesn’t see the SAFE Act as an infringement on Second Amendment rights.

“Being pro-gun and pro-gun reform does not mean anti-gun,” he said.

On the controversial bail reforms passed in the last Albany session, Miller supports the changes.

“I believe bail reform was a necessary step for New York to take,” he said. “We have to remember that these same people being released could already be released before the reform took place, so long as they had the money. A mother of three could be locked up and lose everything over not paying parking tickets, while someone who commits a terrible act could post bail and walk free.”

And as for his chances of winning in a district where Republicans have a significant enrollment advantage, Miller is undeterred.

“We’re pretty confident that this is something we can pull off and win,” he said, noting there are Democratic strongholds in the 131st District, including Geneva and Canandaigua, as well as strong enrollment in Seneca Falls and Waterloo. He said he hopes to appeal to many Republicans and independents as well.

“It just seems the district is looking for fresh ideas,” he said.