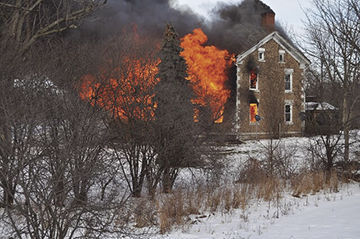 The fire at the Junius home of Doris and Walter Wolf. 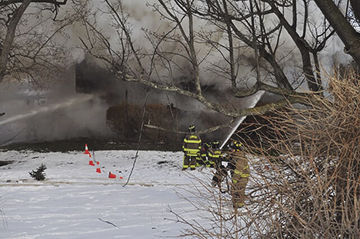 Firefighters battle the blaze at the home of Doris and Walter Wolf. 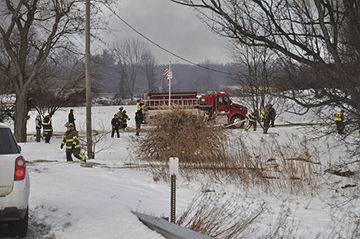 Firefighters work the scene at the Junius home of Doris and Walter Wolf. 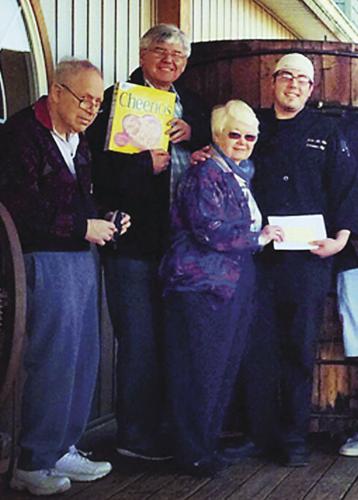 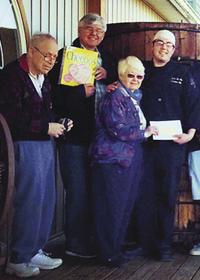 Walter Wolf (left) and his wife Doris accept a donation for Trevor’s Gift from Finger Lakes Young Professionals in 2015.

The fire at the Junius home of Doris and Walter Wolf.

Firefighters battle the blaze at the home of Doris and Walter Wolf.

Firefighters work the scene at the Junius home of Doris and Walter Wolf.

Walter Wolf (left) and his wife Doris accept a donation for Trevor’s Gift from Finger Lakes Young Professionals in 2015.

JUNIUS — For years, Doris and Walter Wolf have devoted much of their time and energy to helping others in the Waterloo and Seneca County areas.

Walter has been limited somewhat by dementia, but Doris remains a “super volunteer,” as many call her, for a host of organizations.

Now the community they’ve helped so much is looking to help them.

The Wolfs are recovering from a devastating fire that destroyed their historic Birdsey Road home Wednesday evening.

“This is an amazing community. I love it,” Doris Wolf said Thursday, speaking on a borrowed cell phone. Her phone and computer were destroyed in the fire as was virtually everything they owned. The cause of the fire is still to be determined.

The Wolfs bought the house in 1977. Built in 1820, it’s on the National Register of Historic Homes. They raised a family there. Doris worked as a journalist for the Finger Lakes Times and Rochester Democrat & Chronicle. Walter was a professor at Eisenhower College and later, Rochester Institute of Technology until his retirement.

Doris said she left the house about 2:30 p.m. Wednesday, and a neighbor called in the fire at 2:42 p.m. Firefighters from 15 companies battled the raging blaze until 8 p.m. before bringing it under control. The roof and upper two floors collapsed into the basement.

“We spent the night with a neighbor. Another neighbor is out of town and said we could use their house for two weeks,” Doris said. “We lost everything. There was 800 pounds of wool in the attic from when I raised sheep that was smoldering for a long time.”

Two safes held important documents, but they are now in the basement and the Wolfs can’t get at them yet.

The family had two dogs and three cats, plus a rabbit.

“I took one dog with me when I left. He made a fuss about going so I took him,” she said, adding that one cat escaped the blaze and was revived by oxygen. “I hope the other two cats got out and are hiding. It looks like we lost the other dog and rabbit, but our 42 chickens outside are okay.”

As a Red Cross disaster responder herself, Wolf tells people to pack a preparedness bag of valuable papers, documents and photos. She followed her own advice, but the bag, unfortunately, was not fireproof and she doesn’t know if it survived the blaze.

Wolf said she and Walter are classic keepers of documents, books and other printed materials accumulated over the years. They now think those items provided fuel for the fire and are gone.

She said her husband’s night nurse came as soon as she learned of the fire and stayed with them Wednesday night to be sure his needs were met.

“I’m going on adrenaline now. I’m going through a list of things we need to do,” Wolf said.

Red Cross has provided some essentials, including a debit card. Friend Yvonne Erway and the “Glitter Girls” group provided socks and underwear. Eagle Scout Jake Erway and members of his troop also have offered to help.

Terry Parker of the Red Cross brought care kits including soap and toothpaste — and the debit card. Wolf praised firefighters for moving the propane tank that provided heating fuel for the house away from the blaze to avoid adding to the conflagration.

Brian McConnell, director of the Red Cross of the Finger Lakes in Corning, said when notified of the fire, a team was dispatched.

“The Wolfs were volunteer responders and community leaders. It’s heartbreaking to see what they are now going through after helping others in similar situations,” McConnell said.

“We will be there to assist in the recovery process,” he added.

Doris said they’d like to see if the house can be rebuilt within the still-standing exterior walls, but that’s for a future discussion. The property was fully insured.

Waterloo Mayor Ted Young said he knows of no organized campaign to assist the family but won’t be surprised if that happens.

“They’re going through a terrible tragedy. As much as they’ve helped people over the years, I’m sure the community will step up and help them,” Young said.

Seneca County Sheriff Tim Luce said deputies and investigators from his department responded to the Birdsey Road fire, just before 2:45 p.m. Wednesday, after it was called in by a neighbor. The two-story cobblestone home was fully engulfed in flames when they arrived.

North Seneca Ambulance and state police were also at the scene, while a LifeNet helicopter was on standby. Luce said crews remained on the scene until 8 p.m. or so.

Luce said the home, which is insured, is a total loss. As of Thursday afternoon, Junius Fire Chief Mike DeWaele said the cause of the fire is undetermined.