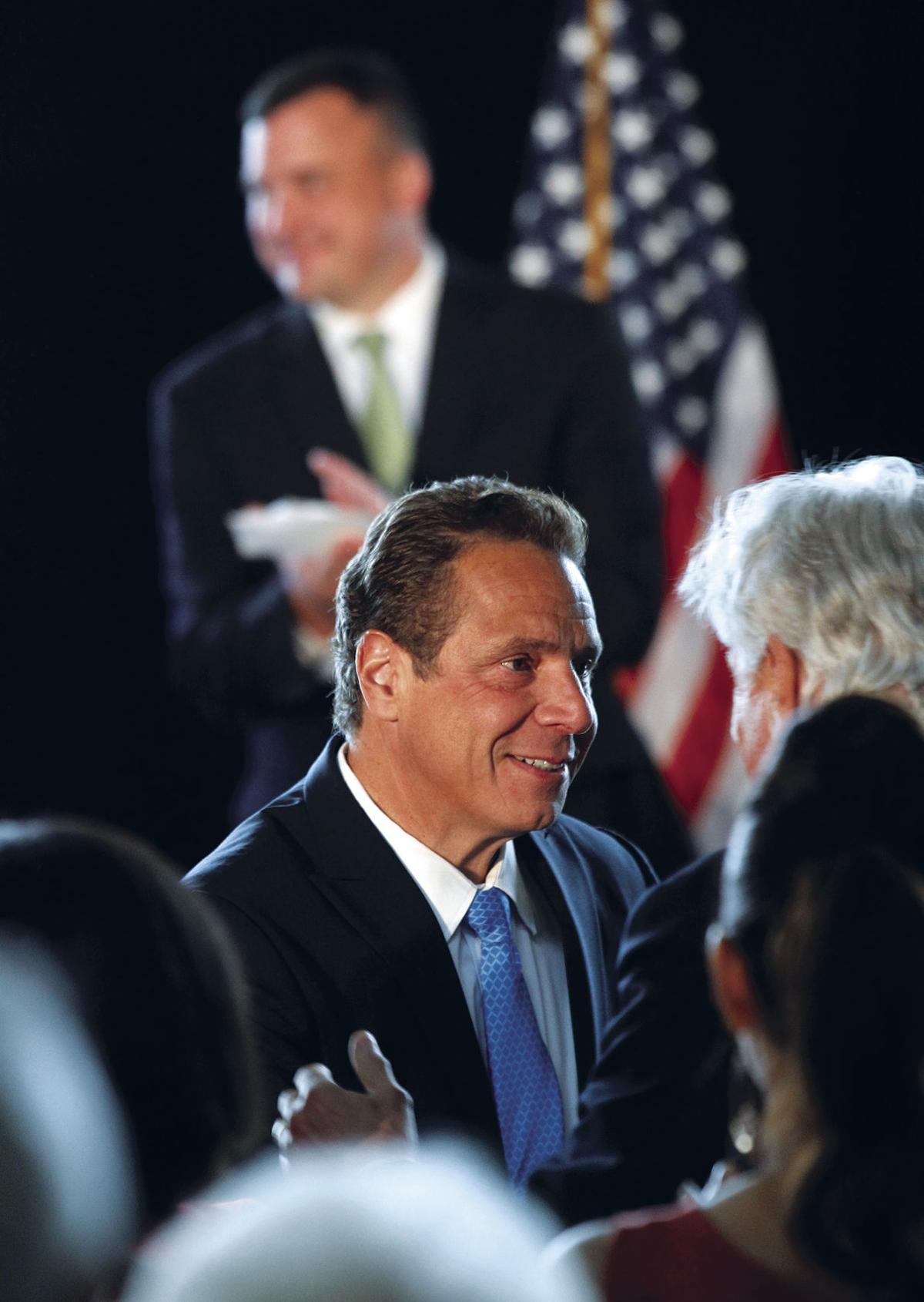 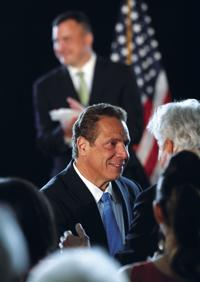 Gov. Andrew Cuomo came to Geneva’s Visitor and Events Center to announce which projects submitted by the city for the state’s $10 million Downtown Revitalization Initiative (DRI) grant will be funded — and for how much. City Manager Matt Horn smiles in the background after hearing about the city’s $15M windfall. 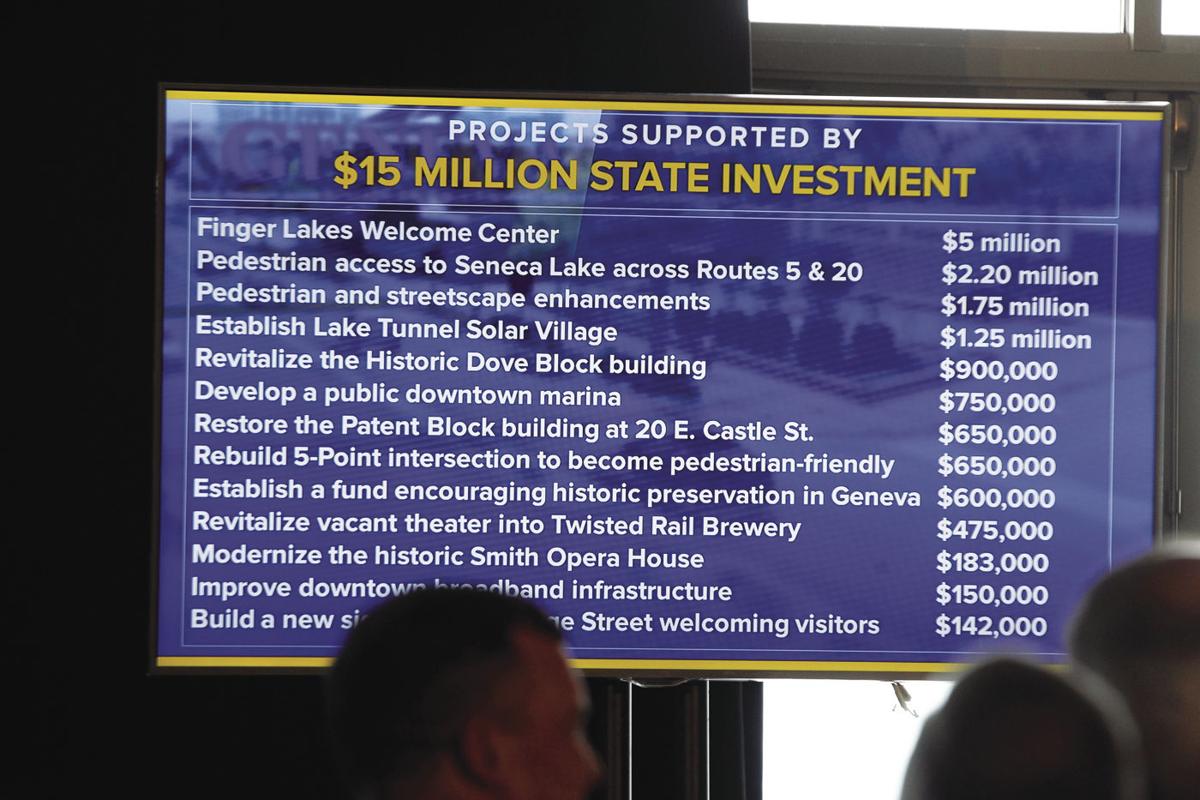 Gov. Andrew Cuomo’s announcement was aided by a visual presentation.

Gov. Andrew Cuomo came to Geneva’s Visitor and Events Center to announce which projects submitted by the city for the state’s $10 million Downtown Revitalization Initiative (DRI) grant will be funded — and for how much. City Manager Matt Horn smiles in the background after hearing about the city’s $15M windfall.

Gov. Andrew Cuomo’s announcement was aided by a visual presentation.

GENEVA — It was a lovefest Friday afternoon at the northern tip of Seneca Lake.

City, regional and state officials all said nice things and were all smiles as Gov. Andrew Cuomo came to the Visitors Center to announce which of the 12 projects submitted by the city for the state’s $10 million Downtown Revitalization Initiative grant will be funded.

In the end, all 12 were funded to some degree.

He also announced plans for the state to partner with the New York Wine & Culinary Center in Canandaigua to convert the Visitor and Events Center to a Finger Lakes Welcome Center.

“When the governor came here earlier this spring, he encouraged us to develop a good, strong plan for the state to approve to justify their strategic investment,” said City Manager Matt Horn.

“It wasn’t easy. It was a heavy lift for us. We spent hours and hours getting public feedback and debating amongst ourselves,” Horn said.

“And we did it. We emphasized projects that would impact the social and environmental fabric of Geneva,” Horn said.

”We didn’t do it alone. We had many local partners as well as ideas we took from Rochester, Canandaigua and Batavia,” he said.

Horn praised Cuomo and his administration for putting intense focus on upstate, something he said has never been done to this degree before.

Aided by a visual presentation, the governor said these projects would get the state money:

• $2.2 million for improved pedestrian access to Seneca Lake and the city’s 60-acre Lakefront Park to and from the downtown district, now divided by four lanes of Routes 5&20 and its 45-mph speed limit.

• $1.75 million for pedestrian improvements to the downtown streetscape. That would include a landscaped median on Castle Street.

• $1.25 million to help the city establish Lake Tunnel Solar Village, a housing development in a vacant space near the pedestrian tunnel under the arterial leading to Lakefront Park. These homes and other facilities in the development would all be powered by solar energy.

It will serve as a demonstration project for a new product called LifeCube, which are housing units that will be manufactured in Geneva. It will feature 24 vacation rentals and 28 micro-apartments.

• $900,000 to help revitalize the historic 1878 Dove Block building at Exchange and Castle streets, once the studio of renowned artist and painter Arthur Dove in the 1930s.

• $750,000 to develop a public downtown marina north of the existing Long Pier.

• $650,000 for restoration of the old Patent Cereal Block on lower Castle Street, a primary gateway to downtown.

There will be two ground-floor storefronts and apartments in the back and on the second level. A new third level would be added.

• $650,000 for upgrades and improvements to the intersection at Castle, North Main, South Main and Milton Streets downtown.

• $600,000 to establish a fund to encourage historic building preservation downtown.

• $475,000 for Twisted Rail Brewery of Canandaigua to convert the former movie theater on Exchange Street to a brewery and beer tasting room.

• $183,000 for modernization and upgrades to the mechanical systems of the historic Smith Opera House on Seneca Street to allow more high-quality performing acts.

• $150,000 to have broadband Internet access brought to the entire downtown area, a move Cuomo called “a necessity” to bringing people downtown and to have businesses and people stay downtown.

• $142,000 to install an arched gateway sign over Exchange Street near Lake Street.

Cuomo congratulated the city for its plan that earned them the original award last summer and won the approval of specific projects that were announced Friday.

“The DRI program empowers cities to develop an overall plan and compete with others for state investment. We looked for projects with the most bang for the buck,” Cuomo said.

He stressed the program emphasizes the need to strengthen downtown for business and residential uses to keep and attract young people. He said access to the lakefront, preservation of historic downtown buildings, and the development of a marina were all important factors to the state.

“The best thing the state can do is get the economy moving,” Cuomo told the packed room. He touted the lowest increase in state spending on record of 2 percent a year during his seven years as governor, the lowest tax rates and the most investment in economic development and infrastructure, which he said created the most private-sector jobs in the state’s history.

For the city, the Routes 5&20 connectivity project was a top priority. It is a $4 million project designed to improve the connection between the city’s lakefront park and downtown business district.

The project calls for traffic calming measures, pedestrian and bicycle safety improvements at the three downtown intersections on Routes 5&20, and improved landscaping.

“These projects represent a unique blend of partnerships between the state, city and private investors which will serve as a launch pad for implementation of the city’s strategic vision,” said Mayor Ron Alcock in a written statement.

Earlier this month, Horn said he expected a decision from the state at this time, based on the number of calls he received from the governor’s team.

Allocations for the 18 projects sent to the state for review total about $12.25 million, more than the $10 million allocated the city in state DRI funds last summer.

The city formed a DRI Local Planning Committee to form a list of projects to submit after a host of public meetings.

Horn said any public projects on the state-approved list could begin as early as next year, noting the city will soon begin working on the 2018 budget.

The state funds are the results of the city’s successful 2016 bid for $10 million under Cuomo’s Downtown Revitalization Initiative.

There were 120 applications for the $100 million pot of state money for the DRI program. Geneva was selected last summer as one of 10 communities to share the $100 million on an equal basis.

Doubling the good news from the governor Friday was his announcement that the state will partner with the New York Wine & Culinary Center in Canandaigua to invest $5 million to convert the Visitors Center into the Finger Lakes Welcome Center.

The building will be expanded and renovated into a “showcase” for visitor information about the Finger Lakes.

The center will include state-produced beverages and food, a child play area and host of interactive kiosks and information about the region. The front and back patios will be redone.

The conversion will see the building closed in September and the work to begin. It will be reopened as the Welcome Center in the spring of 2018.

Retiring Hobart and William Smith Colleges President Mark Gearan thanked and praised local and state officials for making Geneva a place the college’s graduates are “amazed” to see when they return and one that even entices them to stay and live and work here.

Hannah Dickinson and Jodi Dean of Geneva greeted Gov. Andrew Cuomo Friday with signs urging the city and state to “get the lead out” of Geneva Foundry neighborhoods.

The demolished Foundry on Jackson Street operated for 120 years before closing in 1988. It sent particles of lead, arsenic and zinc into the air, which settled into nearby neighborhoods’ soil.