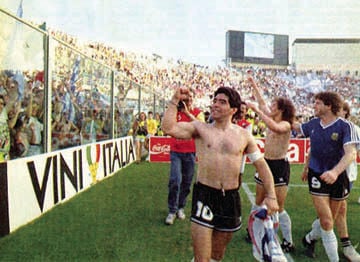 In this wire photo, Maradona and his Argentine teammates celebrate their 1990 World Cup win over Yugoslavia with their fans. Mike Cutillo and his crew would have been just to the left of the Plexiglas a few rows up. 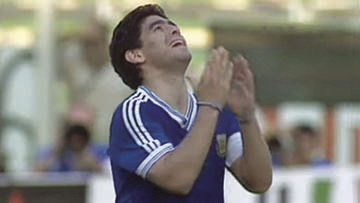 Diego Armando Maradona looks to the heavens after missing a penalty kick in a 1990 World Cup game against Yugoslavia. 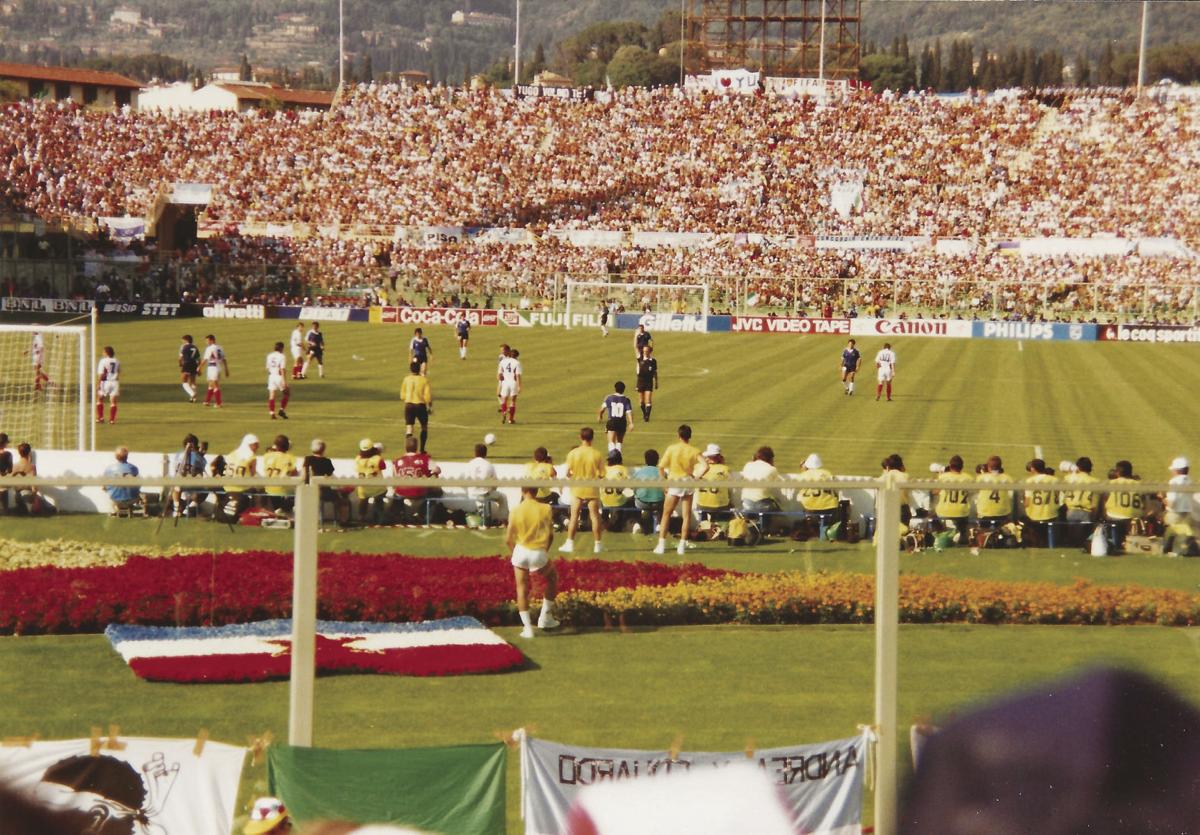 This shot was taken during the 1990 World Cup quarterfinal game between Yugoslavia and Argentina at Stadio Artemio Franchi in Florence with the Tuscan hills in the background and Diego Maradona wearing No. 10 in the dark blue uniform. 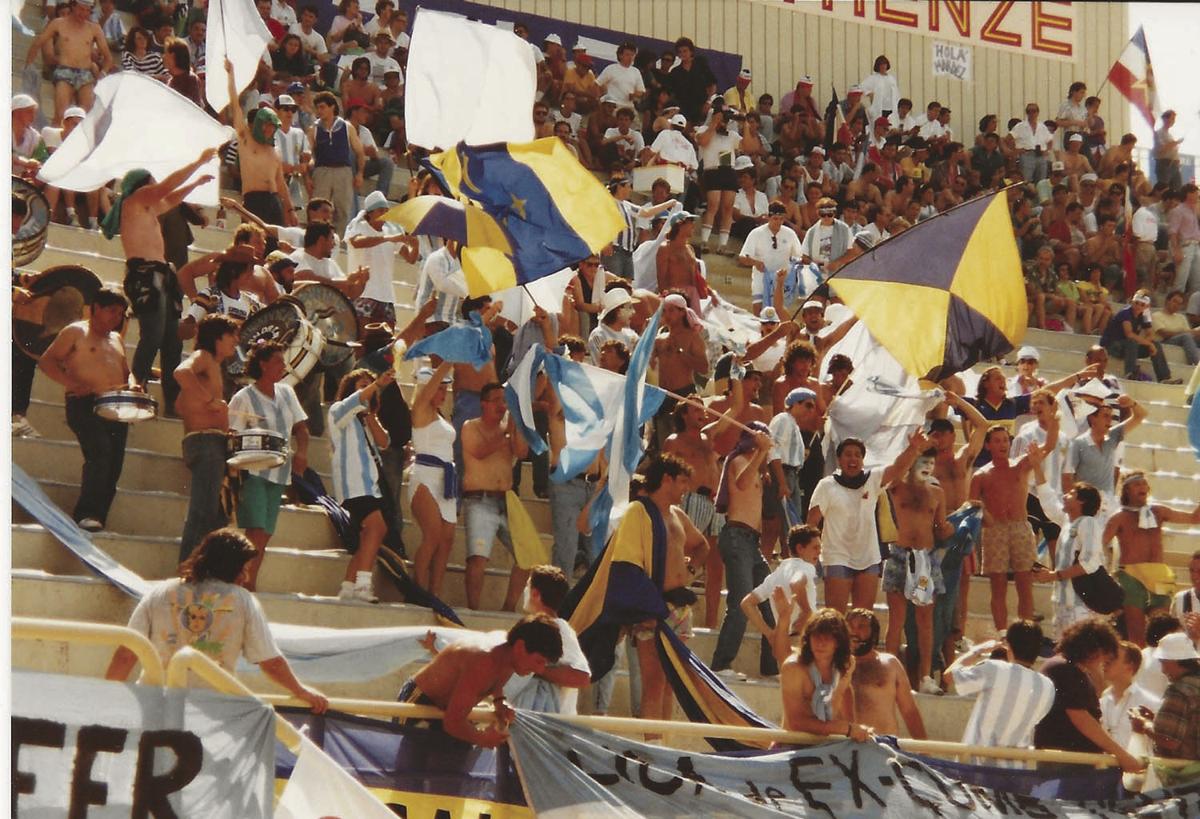 Argentina fans cheer on Diego Maradona and his teammates during the 1990 World Cup in Florence.

In this wire photo, Maradona and his Argentine teammates celebrate their 1990 World Cup win over Yugoslavia with their fans. Mike Cutillo and his crew would have been just to the left of the Plexiglas a few rows up.

Diego Armando Maradona looks to the heavens after missing a penalty kick in a 1990 World Cup game against Yugoslavia.

This shot was taken during the 1990 World Cup quarterfinal game between Yugoslavia and Argentina at Stadio Artemio Franchi in Florence with the Tuscan hills in the background and Diego Maradona wearing No. 10 in the dark blue uniform.

Argentina fans cheer on Diego Maradona and his teammates during the 1990 World Cup in Florence.

The news on the day before Thanksgiving that Diego Armando Maradona had died in his native Argentina caused barely a ripple in the Finger Lakes. Tucked in among stories on COVID-19 surges, vaccines, and politics, NBC’s “Nightly News with Lester Holt” had a short piece on him — which amazed me, actually.

Perhaps the greatest soccer player who ever kicked a ball. If not, at least he’s in the conversation.

What does he mean to me?

A lot. Beginning with the fact that we both were born in 1960, although I’m almost seven months older.

All of us have interests and hobbies and pastimes that are as varied from one person to the next as the DNA molecules that make us who we are. Soccer is one of my passions, instilled in me by my dad, who played it semi-professionally growing up in Italy.

To a soccer aficionado, then, in the 1980s Maradona was not only “the man,” he was a god. Nicknamed “El Pibo de Oro,” or “The Golden Boy” in Argentina, he was called a genius on the field, a transformative player who changed the way the game was played, much like Henry Ford changed the way automobiles were built and Julia Child changed the way cooking shows were made.

Diego scored over 350 goals in a 21-year playing career during all competitions, but he rarely blasted the ball into the net. At 5-foot-6, he was hardly imposing, so his brilliance was manifested in his sublime ball control and his imagination. His creative goals were more often flicks of the ball over unsuspecting goalies’ heads or into the corners from impossible angles, angles from which other players wouldn’t even attempt to shoot. YouTube videos prove his mastery to this day.

He led Argentina to the 1986 World Cup title and into the championship game four years later against West Germany. He played on a number of teams that won domestic league championships, including the Italian club Napoli, which in 1987 and ’89 claimed the only two championships in its now 94-year history.

For as much as he was a maestro on the field, however, Diego’s personal life was another matter — and it’s that, I think, which made him even more beloved by everyday fans. He was no angel. He was human, with all the imperfections and blemishes that go along with that. He was suspended in 1991 and ’94 for drug use, skipped out on paying personal taxes in Italy that he still owes, and was suspected to have been bought off by the mafia in 1988, the purported reason Napoli lost four of its last five games that season and didn’t have a three-year run of championships.

Maradona denied ties to organized crime and once tried to explain away the 1988 failure by saying, simply, “We have to let someone else win, otherwise it gets boring.”

Those years when he played with the Neapolitan club represent my first real connection to him. My dad and I would go to a little café on Salina Street in downtown Syracuse on Sunday mornings, when Italian soccer games were shown via closed-circuit television — this was way before cable, remember. Dozens of men would crowd into a small, dark, cigarette smoke-filled back room — this also was way before the coronavirus — and watch games on a small TV screen, yelling at the action in Italian, shaking their fists when upset, and cheering wildly when their favorite teams scored. Napoli, being one of the top teams with Maradona leading the way, often was featured in those broadcasts.

The first AP writing award I ever won in my career was for a feature story on that café and experiencing those games. Thank you, Diego.

My second great memory of “El Pibo de Oro” was watching him play live during the 1990 World Cup tournament for Argentina. This was so long ago that their quarterfinal opponent that day — Yugoslavia — no longer exists as a country! Five of us — my dad and me, my dad’s foreman and his son, and my buddy Ken — were in Florence on that June 30 day. We didn’t have tickets but we wandered near the stadium, the Stadio Artemio Franchi, and ended up buying five from a Canadian man who was just looking to unload them because he had to leave and couldn’t stay for the game.

These days, you’d have to be worried that they were counterfeit. Not then. They turned out to be great seats, right behind one of the goals, about five rows up and smack dab in the middle of thousands of Argentine fans, who spent the game beating drums, chanting songs — mostly to their idol, Diego — and waving flags and banners.

The game itself was a tough, physical, choppy one that didn’t allow room for the free-flowing Maradona to make much of a mark, but the memory I will carry with me forever is watching him warm up, of all things. Just the way he touched the ball, so softly, so naturally, was different than any other player on the field. He would juggle it — keeping it aloft with his feet, his thighs, his head, even his shoulders — seemingly for as long as he wanted to, or until he got bored.

The game was scoreless through regulation and overtime, so it went to a penalty kick shootout. Naturally, Maradona was chosen as one of the five shooters for Argentina, but his rather tepid, left-footed attempt was saved by the Yugoslav goalie, causing Diego to look to the sky in anguish.

However, Argentina still won the shootout, 3-2, and so, the game, which is when the fun really started for us. All the players, wanting to celebrate with their fans, rushed over to the section of the stadium where those fans were cheering crazily — our section! They were banging on the Plexiglas barrier and dancing; some took off their jerseys and were whipping them around their heads, and some even tossed those jerseys to the fans — my dad’s foreman’s son caught one belonging to another star, Pedro Troglio.

Ken and I moved down close to the Plexiglas about the same time one Diego Armando Maradona came up to it from the other side and started slapping it with the palms of both hands. He was right there in front of us, I mean so close I could see the sweat on his brow.

Was it David Letterman who used to have the “Brush with Greatness” segments on his show? Well, that was one for me.

I was telling that story to our friend Lisa Barrett on Thanksgiving, and she said something like, “Only you, Mike, would have a Maradona story,” which made me laugh.

We all have stories, right? Often based on those aforementioned hobbies and pastimes and created as we follow the paths down which life takes us. June 30, 1990 was the day my path intersected with that of one of my favorites, Diego Armando Maradona.