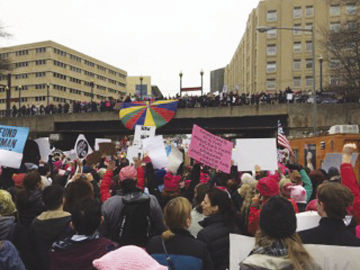 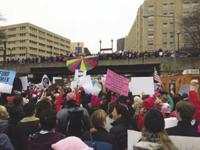 There wasn’t a lot of room for Cam Miller — or anyone else — to walk at times during Saturday’s Women’s March in Washington. 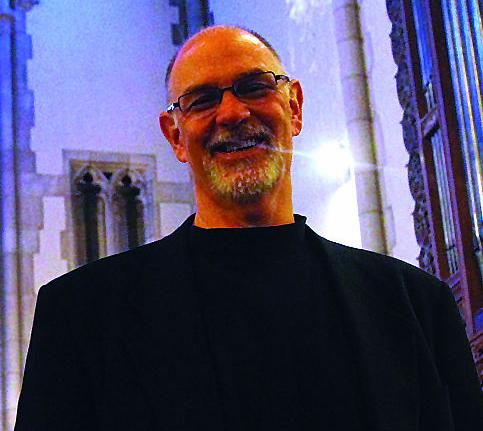 Cameron Miller is the author of the spiritual fiction “The Steam Room Diaries” and numerous published poems, and is publisher of www.subversivepreacher.org. He lives and writes in Geneva and serves as the priest of Trinity Episcopal Church. He can be reached at denimspiritresponse@gmail.com.

No one in authority will say how many marched in the nation’s capital but by 4 in the afternoon on Saturday, Jan. 21, 600,000 people had used the Washington Metro, and that does not include all the marchers, who like myself, arrived by other means. (FYI: that number far surpasses Inauguration Day usage for either 2017 or 2013).

Many reading this were at a march in Seneca Falls (10,000), or went to walk with family and friends in Philadelphia (50,000), or Buffalo (3,000). Others read or heard about it and were incensed by the massive outpouring, and even blamed news outlets for exaggerating it.

I stood in a crowd in Washington, D.C. that was so dense no one could move left or right, forward or backward.

The streets were so packed in every direction that the march could not proceed as planned, because no one could move. Finally, word went out to start moving in whatever direction we could move, and so find alternative routes to the White House. Instead of a single gargantuan line of marchers, there were dozens if not scores of massive marches, all moving along parallel streets in Washington, and then cutting over to Pennsylvania Avenue across the Mall and other open spaces.

In the midst of it all, there was a moment nearly as miraculous as the sheer sea of human faces that had traveled long distances just to stand together with strangers.

The march was to have begun at 1:15. At 1:45 everyone was still jammed into motionless crowds, wondering what was happening. Chants of “March! March!” went up from exasperated participants stuck in place and unable to hear whatever was happening on a stage, which was somewhere that could not be seen either.

At that point I had been on my feet for three hours already, buoyed by the opportunity to be there with my wife, two daughters, and their partners, but still aching and sore. Just then I suddenly became aware of gentle movement to my left. Two or three body widths away I saw a single file line quietly and slowly snaking through the crowd. A Native American woman in blue beaded apparel was leading the line. She stopped parallel to me, unable to move forward, turned back toward those following her and said, “Let’s sing the ‘Woman Warrior’ song.”

She closed her eyes in a meditative stance, arms stretched skyward as she sang with a cantor’s cadence. It was lilting, peaceful and melodic. The women and men following her joined in. She turned and moved forward.

As if it were Moses entering the parted waves of the Red Sea, the hard-packed crowd reverberated ever-so-slightly as the line of indigenous people meandered through. I could see the body language of those standing nearby when it registered what was happening. I had had the same reaction.

First came the realization someone was moving, next a reactionary resistance to someone trying to do what no one else could do, and then a recognition of who it was with an almost reverential bow that brought with it a backward stepping motion. The line of Native women must have been 30 or 40 people long, and it was the only forward movement that took place in that throng of thousands, packed like sardines as we were at the intersection of 12th and Independence (I think). Soon they disappeared into the sea of bodies.

It was a graceful, even spiritual moment in the midst of the purposeful chaos within which we had been swallowed. I marveled, and was its grateful witness. True democracy goes out of its way to protect and even nurture its minorities, and to allow people to be who they are instead of forcing homogeneity.

Cameron Miller is the author of the spiritual fiction “The Steam Room Diaries” and numerous published poems, and is publisher of www.subversivepreacher.org. He lives and writes in Geneva and serves as the priest of Trinity Episcopal Church. He can be reached at dspiritflt@gmail.com.