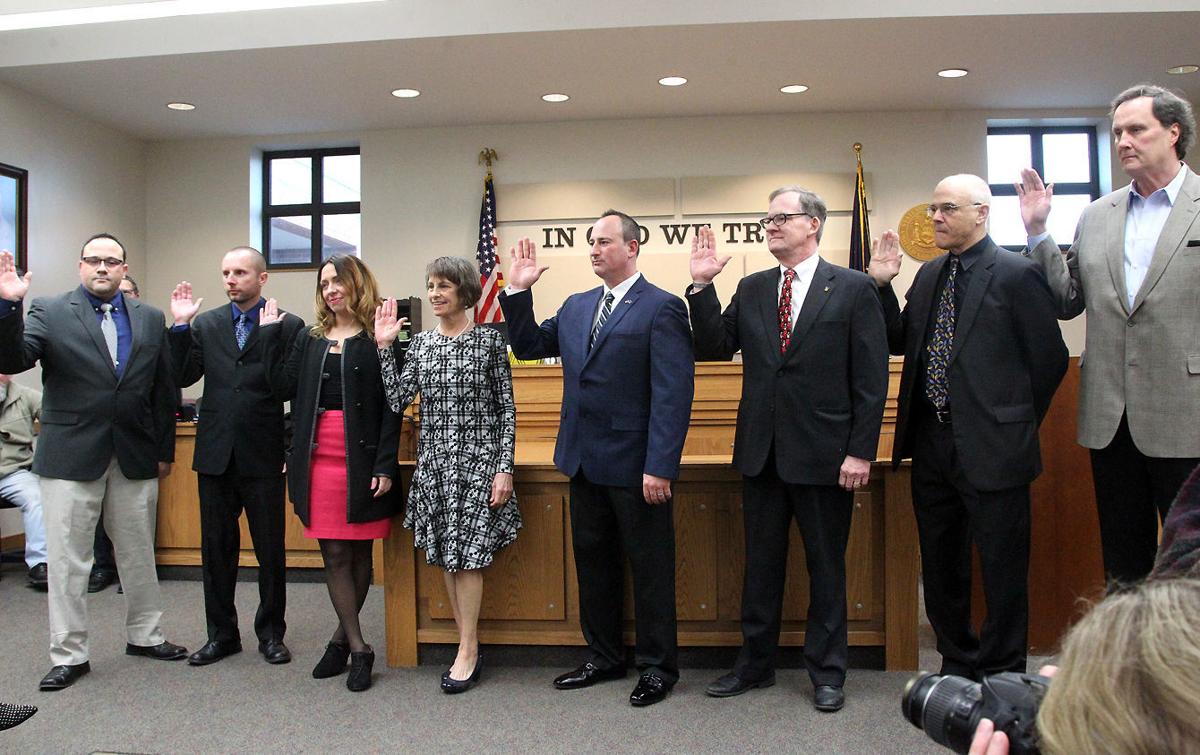 A few days ago I attended the inauguration of Geneva’s new City Council. Twenty years ago, the last time there were so many new faces being welcomed, the ceremony was at the Smith Opera House (perhaps the new millennium called for something grand). This New Year’s Day ceremony felt substantial, even without the gilt and glamour of the Smith.

The courtroom that serves as the “temporary-forever” Council chambers was filled to capacity, and there were enough of us standing in the hallway to fill another room of the same size, if such had been available. And, lest you believe this was all just a sign of councilors with very large families, I am happy to report that there were many people in attendance who are not related to any of the people newly elected (not even in the most-everyone-in-Geneva-is-related way). Instead, it really felt as if a great deal of the community cared about the potential for things this new group will accomplish together.

It was nice to hear optimistic (and realistic) remarks from Mayor Valentino and At-Large Councilor (and highest vote-getter) Anthony Noone. There were also many hopeful statements from attendees about the Council setting egos aside and doing the people’s business. And, while many people talked about the differences in personalities and styles between various councilors, I only heard one person invoke the dreaded “team player” terminology.

If there are two words in city government that make my blood boil, it’s “team player” (and also “why bother?”). Yes, I’ve just given four words, but it’s a tie between those two groups of two). Both sets of words convey the same “don’t-rock-the-boat,” “go-along-to-get-along” message that holds up progress, stifles innovation, and leads people with good ideas to invest their time and energy elsewhere. “Why bother?” indicates that everything’s a done deal and the process is (as Councilor Ken Camera has correctly criticized) merely “democracy theater.” “Why bother?” says participation is futile and implies that there’s nothing worth fighting for anyway.

But nothing good in Geneva has come without a struggle. Perhaps you don’t remember that housing used to be prohibited in downtown? But would downtown be as vibrant as it is now without upper-floor residences? That was a fight. Perhaps you don’t remember that “The Cooler” (skating rink) used to be way colder when it was exposed to the elements? Getting it enclosed was a fight. Perhaps you don’t remember when a dilapidated building stood where the Welcome Center now stands? Getting that building torn down was a fight! In each of those cases, and others too numerous to mention, those of us who had an idea for doing things differently were met first with “why bother?” When we insisted that such things were worth fighting for we were told we were not “team players.”

But what does it mean to be a team player in Geneva? To the folks usually bludgeoning people with those words, being a team player seems to be akin to belonging to the old boys club. If you didn’t go out drinking with the guys after meetings, if you declined lunch offers and rounds of golf from developers, if you objected to illegally convened executive sessions, if you were “airing dirty laundry” by exposing backroom deals, if you dared to ask why “we’ve always done it that way,” and if you encouraged the public to show up and speak up — well, then in their eyes you simply weren’t a “team player.”

I was, and probably still am, labeled not a team player. But I believe they misidentify the team. In their eyes, the team is the establishment, the Council-as-club, the good ol’ boys. I wouldn’t ever join “Team Council” or “Team Developers” or “Team Cigars and Scotch.” I am and continue to be Team Geneva! The city’s best interest is what needs to be protected. When a true team player sees teammates running the ball the wrong way down the field, they don’t assist — they get in the way, wave their arms, and try to redirect.

Looking at the new Council, there are more than a few people with the courage to say “hang on — that’s not best for Geneva, even if it’s an easy or popular thing to do.” Will the powers-that-have-been continue to malign and criticize them as not being “team players,” or can we learn from the past and recognize that Geneva only gets better when there is creative tension and when elected officials are willing to stand up for an ever-improving Geneva for all residents? That’s the kind of team I’m hoping for.

Jackie Augustine lives with her three children in Geneva, where she served on City Council for 16 years. An ethics instructor at Keuka College, she also is co-director of the Seneca7 relay race. Email her at writethingcolumn@gmail.com.