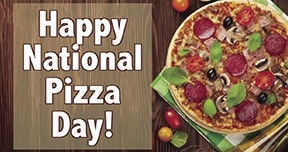 Friday was National Pizza Day. I hope you celebrated with your favorite slice or pie.

Pizza is the best gift from Italy to America and arguably its favorite food. The Neapolitan style pizza is the most familiar: mozzarella and Marzano tomato sauce on a leavened flour crust. The art of its making it is included on UNESCO’s list of intangible cultural heritage.

But did you ever ask: What kind of pizza am I?

I’m a mushroom pizza! At least according to a survey at this link: https://nationaltoday.com/national-pizza-day/

This party staple is hardly the only food Italians have contributed to everyone’s delight. The Mediterranean diet, considered one of the healthiest on Mother Earth, is the source of the varieties of foods prepared and cooked from land as well as sea. But Italians also have taken foods from all over the world and continue to make the most flavorful dishes. Garlic from the steppes of Asia as well as peppers and squash from the Americas are examples of the creativity of the Italian cook. The simplicity of pizza is part of what I love. And there’s so much more.

Growing up, I thought Italian food was the best in the world. Little did I realize that along with all those inspired dishes proudly presented by my mother, I also was partaking of the habits and lore of Italian culture. Through the long years of World War II, my mother’s family was poor but resourceful. Being the oldest daughter of nine children, it was her task to forage for wild plants, stretching the family’s food, and then to help prepare meals. Despite scarce and often unaffordable ingredients, she nevertheless prepared traditional dishes of the region, as she was taught by her mother and grandmother.

From Pietro di Donato’s 1937 novel, “Christ in Concrete” — “Bowls of escarole salad spiced with wine vinegar, salt and olive oil were heaped, and hands dug in heartily. Out in the streets, it was cold January, but in the house of Geremio his family and kind sat knee to knee at table under gaslight and smiled to the loving goodness of food.” This is a coming-of-age story of a boy and the struggles and joys of Italian immigrants making their way in a new country at the turn of the 20th century.

Every immigrant parent sacrifices for their children to set roots in the new land. In the U.S. today, about 19% of the population are immigrants, the largest in the world. Europeans, Latin Americans, Asians and so many others left their homelands for more opportunity, freedom of being, or to escape oppression. Through it all, they felt the comfort of familiar aromas, sharing old stories and creating new ones. It’s about food whoever or wherever you are.

The harvest in the Finger Lakes brings a cornucopia of delight and hospitality. Whether it’s images of pumpkins, lanterns and ghouls, or native peoples sharing their bounty with newcomers, the season brings people together to appreciate what they have. The fall/winter holiday season stretches from Halloween through the Iroquois mid-winter ceremonies. And now we approach the spring/summer season with earnest, bracketed by Valentine’s Day and fall harvest. Maple syrup is the first taste, followed by peas on through fresh fruits, vegetables and corn.

Growing up in a first-generation family of Americans of Italian descent, “The holidays” include Easter, The Fourth of July, Thanksgiving, Christmas and the New Year. Menus have changed along with so much of our culture. At Thanksgiving, the grandest feast of all, an antipasto platter shares the table with butternut squash soup, and lasagna along side a roast turkey. Rice balls served with a side of stuffing, and sautéed rapini greens and a green bean casserole. Figs and cranberry sauce. And cannolis on the same plate as pumpkin pie. We nearly drown in “seven sea food dishes” on Christmas Eve. Each holiday we would eat like there was no tomorrow.

Food was the cornerstone of my mother’s religion. After grace, we ate and shared stories of the day. And if we didn’t finish everything on the plate, we were admonished with: “It’s a sin to leave food on the plate, especially with all the hungry people in the world.”

If we’re not giving thanks every day for what we have, Thanksgiving is the day we can bow our head in gratitude. Perhaps the thought will linger beyond Black Friday and the long weekend. We know there’s enough food produced in the country and the world every year to feed everyone. It’s a matter of access and land. And justice to me means a full plate for all.

Today, my family shares traditional and new dishes. We tell stories and reveal recipes and debate sports stats but one thing about Italians at the table really stands out: We talk about food and family all the time. Has the baby had pasta fagioli yet? What’s growing in the garden? What did you make last night? Who’s coming to dinner?

Marcella Hazan brought traditional Italian cooking to the U.S. and UK with her cookbooks. She wrote, “The Italian comes to the table with the same open heart with which a child falls into a mother’s arms, with the same easy feeling of being in the right place.”

Italian cooking is solidly based on peasant tradition but that too is changing. It is about the informal cooking of hard-working people, rarely technically difficult or a highly refined style. The Italian art of cooking and eating is accessible to all.

And pizza fits the bill perfectly, whether you make your own or order out. A birthday party, a meeting or watching a ball game, a slab or two satisfies. The best lessons about food include learning about and preparing the foods from where we live. While the Mediterranean diet may be highly regarded and healthy, eating from Finger Lakes contributes to my well being.

Everyone knows “Mangia” means “Eat” in Italian. It also means eat and enjoy this food, eat up life, eat and be well. There’s an Italian proverb that welcomes us all to the table. “A tavola non s’invecchia.” At the table, one never grows old.

Tony Del Plato is an innkeeper, cook and contributor to Moosewood Restaurant cookbooks. He lives in Interlaken.