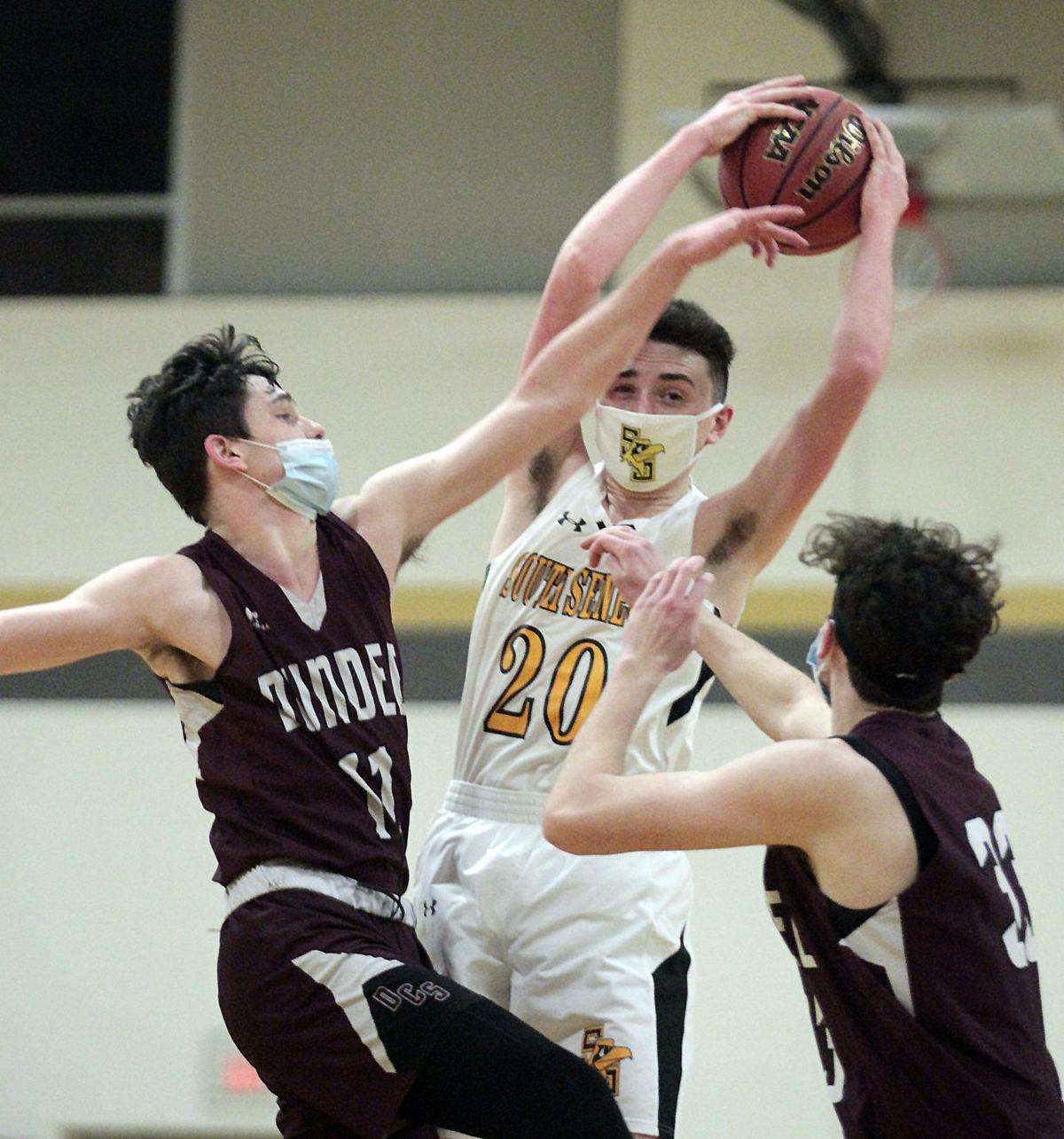 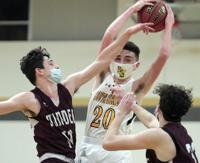 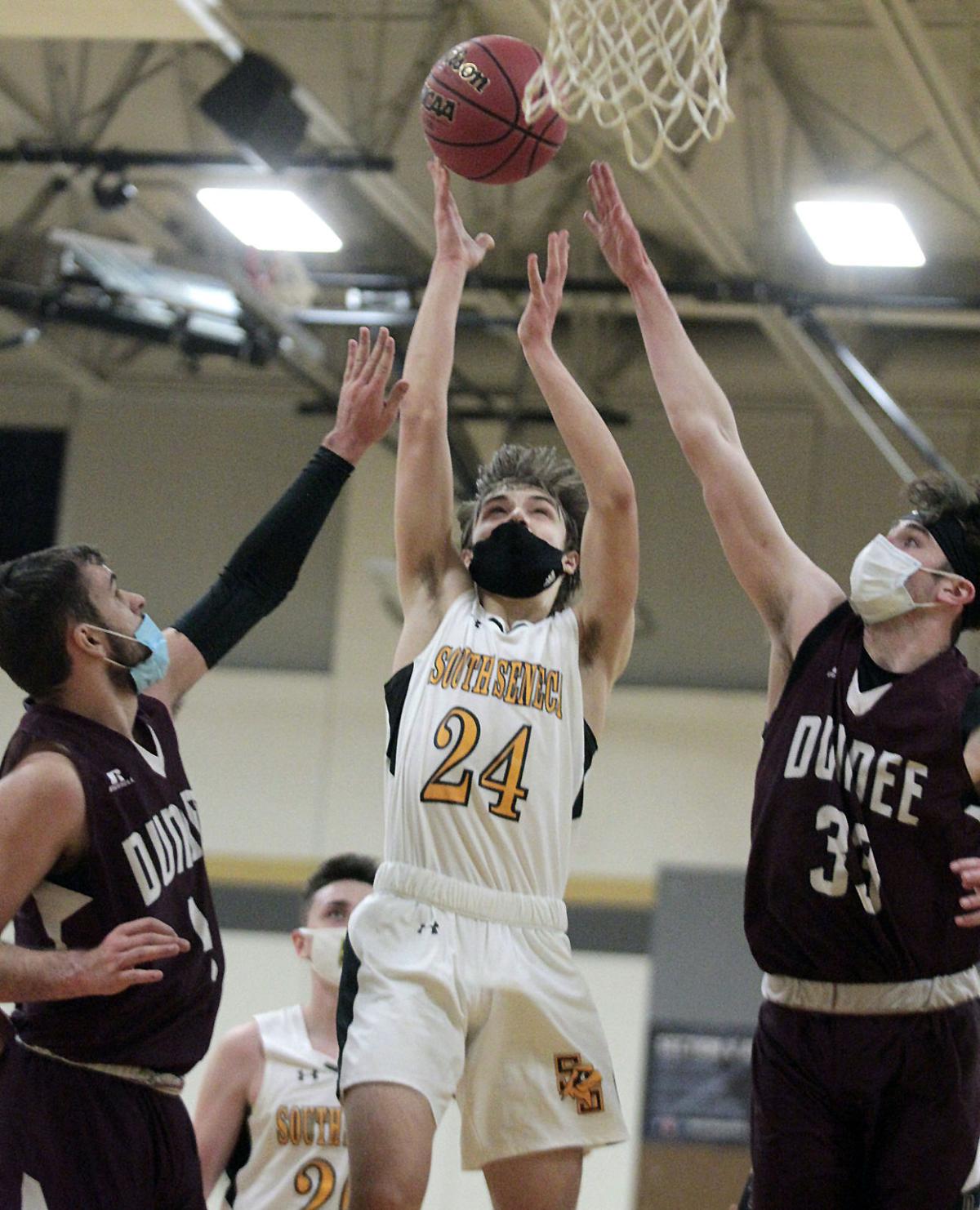 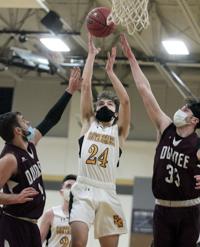 South Seneca senior guard Nick Houck (24) absorbs heavy contact and still gets the layup and converts at the foul line to put the Falcons up by three points with a minute to go.

South Seneca senior guard Nick Houck (24) absorbs heavy contact and still gets the layup and converts at the foul line to put the Falcons up by three points with a minute to go.

OVID — While a cold blizzard roared outside, inside John “Jack” Guinan Gymnasium on Saturday night, South Seneca senior Kenyan Russ showed the ice in his veins on Senior night.

The Dundee Scotsmen stormed back in the final quarter and eliminated South Seneca’s double-digit lead to tie the game. With the clock nearing zero, South Seneca senior Kenyan Russ drained a game-winning 3-pointer with about one second to play to win the game 43-40 on Saturday night.

“It felt great, my heart was pounding a little bit,” Russ stated about his game-winner.

Russ’ 3-pointer was his only basket of the game for the senior, and it could not have come at a better time.

“Unbelievable,” South Seneca head coach Doug Baker stated about Russ’ game-winner. “In practice, he knocks them down all the time. I wasn’t surprised that he made it. It was just nice to see him come up on senior night to make that big shot like that.”

The Dundee Scotsmen(1-3, 1-3) swept the season series last year. A hot start had the South Seneca Falcons(4-1, 4-1) thinking of turning the tables this year.

South Seneca took a 33-25 lead heading into the fourth quarter.

After both teams played in tight games all last season, the game had a sandpaper feel to it going into the fourth as multiple technical fouls were handed out to both sides.

Dundee cut the deficit to six as Scotsmen junior Logan Salvatore lifted his team with back-to-back 3-pointers to tie the game up at 35-a-piece with about 4:30 remaining in the game.

Salvatore finished with a team-high 14 points.

Despite the comeback, South Seneca continued to score on their end but the Scotsmen roared down the floor to keep the score even time after time but could never grab hold of the lead.

With the score tied, South Seneca senior Nick Houck converted an and-1 with about 47 seconds to play to put his team up 40-37.

Houck had an impressive senior night with his game-high 19 points after connecting on four 3-pointers.

“They’re the first group that I started coaching here at South Seneca so it was kind of special for us,” Baker added about his seven seniors on his squad. “We have a lot of potential so we’ll see how things go as the year goes on. They definitely give it everything they got when they’re out there on the court, that’s all you can expect as a coach.”

On the following possession for the Scotsmen, senior Brady Richardson scored all five of his points in the final quarter of the game as he drained a right corner 3-pointer to tie the game back up at 40 all with 23.1 seconds to go.

“The biggest thing we talked about for this game was our energy,” Dundee head coach Lester Miller stated about his team. “We get flat at certain times during the game. If they come out and play like that for four quarters, then we’re going to be alright. I’m real proud of them the way showed themselves in the fourth there.”

On their next possession, the Falcons exhibited exquisite ball movement that led to a great opening for Russ to drain the game-winner.

“We want to win a league championship this year,” Russ stated how his team’s expectations this season.

Salvatore got a half-court shot off on the final possession of the game but could not send the game to overtime.

“Everyday we’re hoping we’re in the gym,” Miller said on his team going forward this season. “We’ve had a tough start to the year, we’ve had some tough games but we’re looking forward to the rest of the year.”