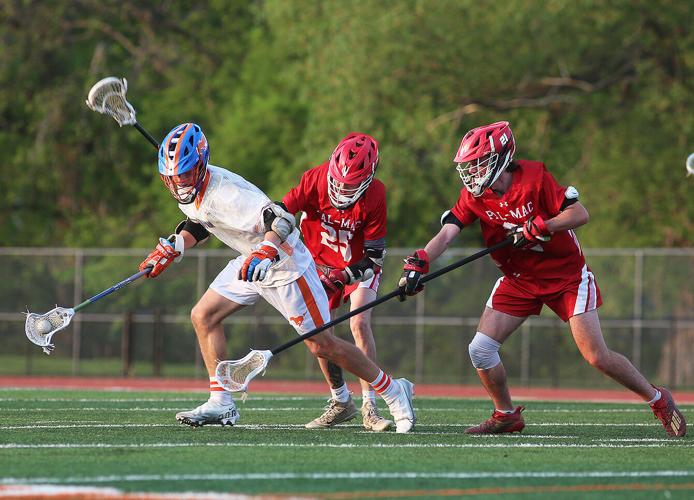 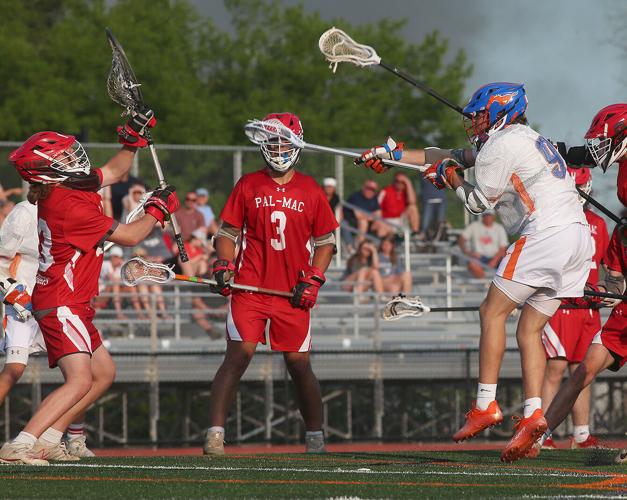 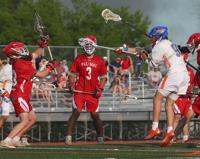 Penn Yan junior midfielder Caden Dixon (91) works his way under Pal-Mac defenders and gets a shot on goal that is swallowed up by Red Raiders sophomore goalie Peyton Lich (23).

Penn Yan junior midfielder Caden Dixon (91) works his way under Pal-Mac defenders and gets a shot on goal that is swallowed up by Red Raiders sophomore goalie Peyton Lich (23).

PENN YAN — It had been 1,862 days since the last time the Palmyra-Macedon Red Raiders boys lacrosse program was victorious over the Penn Yan Mustangs.

That streak was snapped Thursday evening when the Red Raiders went into Penn Yan and left with a 7-3 victory to pick up the program’s first win over the Mustangs since 2017.

Both sides came into the game undefeated in league play. After trailing 3-2 going into the final quarter, Pal-Mac scored five unanswered goals in the fourth to seal the victory.

“It was a great-fought battle,” Pal-Mac head coach Joe Hill said after the big win. “It doesn’t matter what age, (Penn Yan) is a young team and we know that. We came down here in the sectional finals last year, we didn’t play very well, they played fantastic. (Goalie Griffin Emerson’s) performance today was exceptional, and it was nice to see some of the younger kids on our team step up.”

“This is a big win for our program,” Hill added, who views Penn Yan head coach Brian Hobart as mentor when he first started coaching. “We know what Penn Yan is all about. We strive to be a team like them because of how good they are and the legacy that they have. It was nice to play well down here, this is a tough place to play, they have a lot of pride here. It’s just nice to see the boys play well tonight.”

It took a little over a minute into the final period when Red Raiders senior midfielder Quinn Nolan tied the game up at 3-all. Nolan and sophomore teammate Keagan Hoesterey led the way with two goals each.

A few minutes later, Lich dished it to his junior teammate, Mike Halsey, in front of the net for the uncontested goal. There was no stopping the Red Raiders after that.

“For 36 minutes, we did exactly what we wanted to do. They played great,” Hobart said of his team. “I can’t fault their effort in the fourth quarter; we made some mistakes. Against a good team, you make some mistakes, you get beat.

“It’s tough to lose a league game like this. We’re going to learn from it and bounce back.”

Midfielder Carter Earl led Penn Yan in scoring with two goals on Thursday. It was his assist to eighth-grader Tukker Fisher in the second quarter off a fast break fueled by an Emerson save that tied the game up at 2-2 following an early deficit.

Earl scored the game’s lone goal in the third quarter that gave the Mustangs the slight lead heading into the fourth quarter.

“They’re getting better,” Hobart said on the development of his young team this season. “They’re a young team, but at this point we’re not going to give them any outs or any excuses. They still wear the Penn Yan across the front of their chest, so there are certain expectations that need to be made. We took some steps forward today, and hopefully we can do this come playoff time.”

Both sides were absent some key players. Penn Yan (9-4, 8-1) was without junior attacker Frank Ochoa, who was second on the team with 27 goals coming into Thursday. Pal-Mac (12-1, 9-0) was without senior goaltender Will Nichols.

Red Raiders sophomore goalie Peyton Lich had only played 38 minutes this season before Thursday, but stepped up to be a big part of his team’s success in the clutch road victory.

“He plays a lot of lacrosse,” Hill said about Lich’s performance in front of the net. “We had a lot of faith in him. Unfortunate that Will (Nichols) went down last week with an injury; you never want to see that for anybody on the field, whether they play a lot or not. It’s nice to see that he came in and stepped up. The supporting cast played really well tonight.”

The final week of the regular season wraps up next week as the Red Raiders have one more contest left as they host Mynderse on Monday at 6 p.m. The Mustangs still have three more games to play before sectionals, as their next game is Saturday morning when they welcome Clarence at 11 a.m.