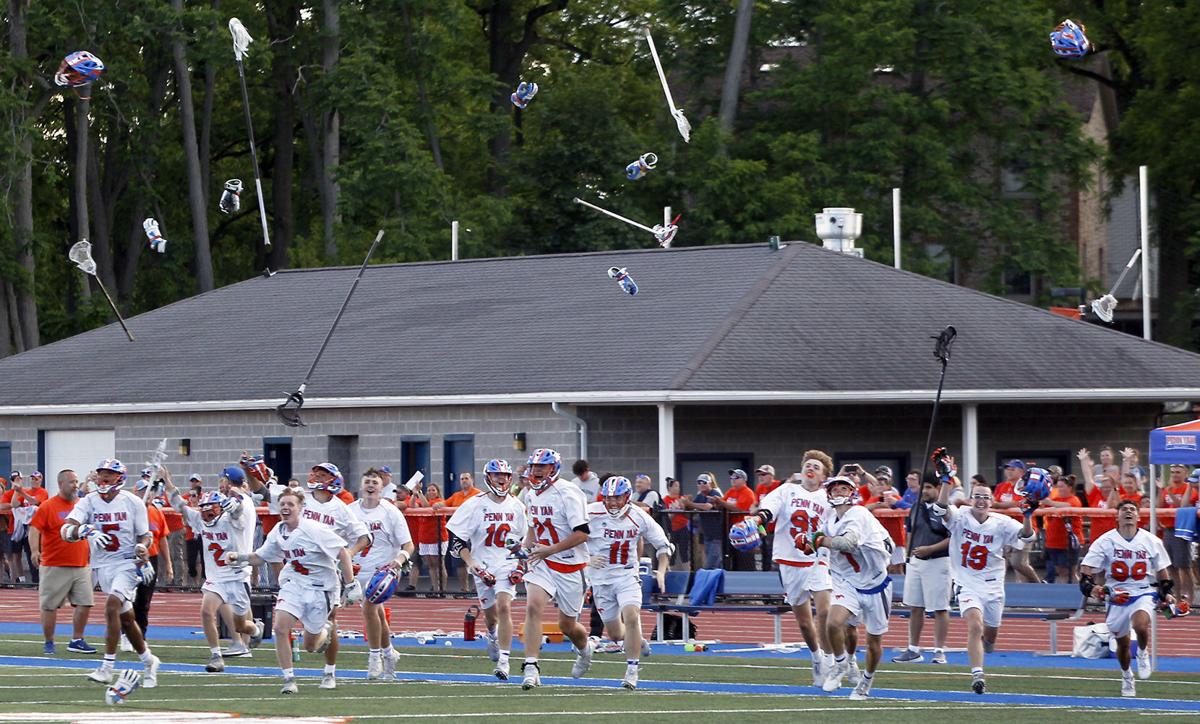 Members of the Penn Yan boys lacrosse team storm the field after the clock hit 0:00 and the scoreboard read 16-2 in their favor against Palmyra-Macedon Monday. 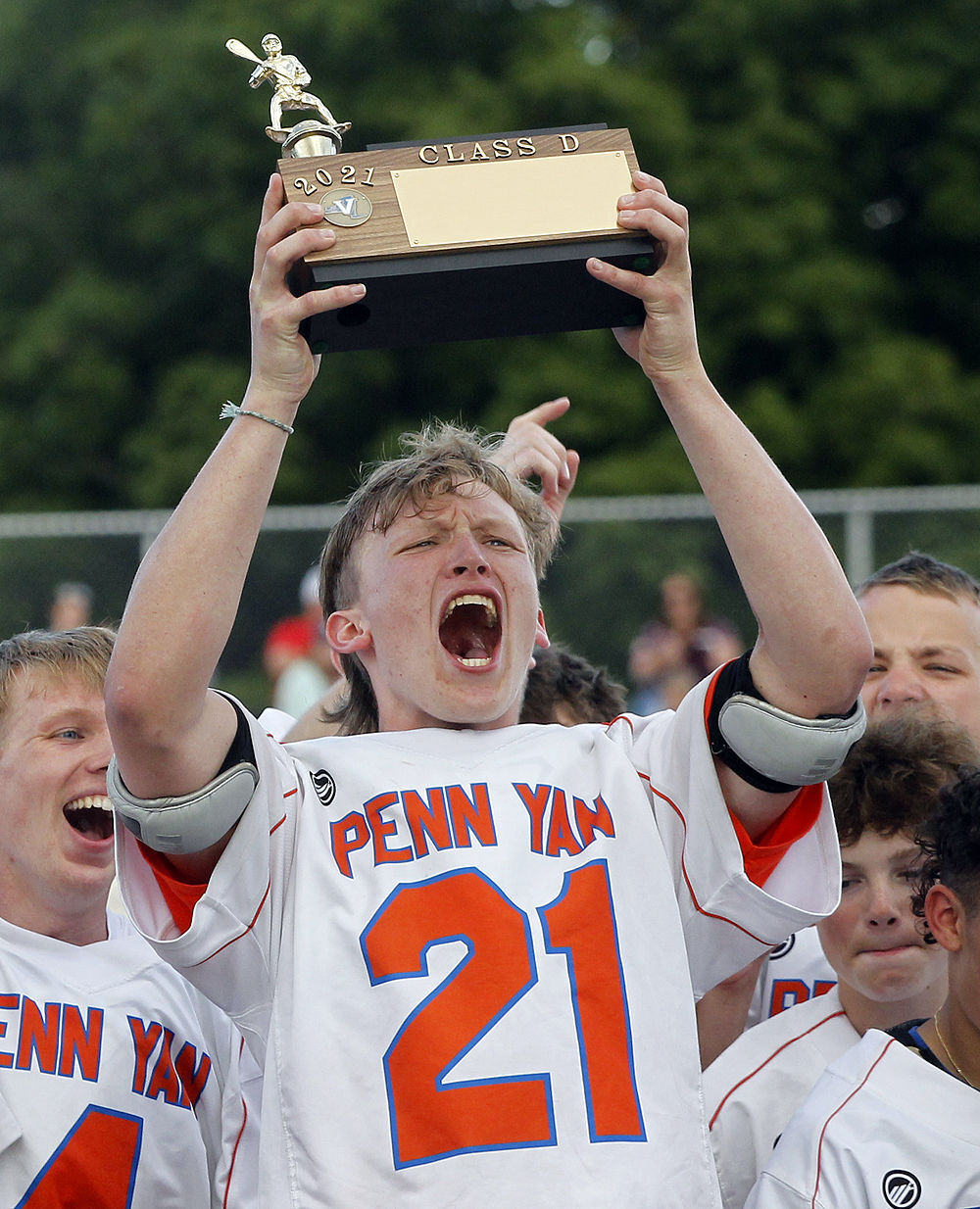 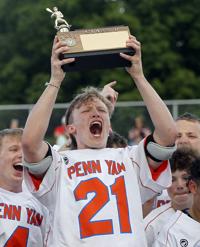 Members of the Penn Yan boys lacrosse team storm the field after the clock hit 0:00 and the scoreboard read 16-2 in their favor against Palmyra-Macedon Monday.

PENN YAN — The carnage of a championship was spread across the field and outside the Penn Yan boys lacrosse locker room early Monday evening.

The Mustangs left behind sticks, gloves and helmets. However, they brought with them their Section V Class D championship trophy onto the bus that paraded through the community. While fans flocked to the parking lot to see the players, coaches and two firetrucks leave for a celebration, there were a few young kids that stuck around playing wall ball outside the Penn Yan locker room.

The younger generation watched as the 2021 Mustangs went off to celebrate the program’s 25th Section V title, their first — and perhaps only one — that was won on home turf.

On Monday, the top-seeded Mustangs defeated No. 3-seeded Palmyra-Macedon for their 10th straight sectional title, 16-2. It was Penn Yan’s 22nd championship in the past 23 seasons.

It was a long time coming considering there was no 2020 campaign and the team had been conditioning since November. It all came down to Monday’s game, and the Mustangs played one of their finest stretches of four quarters of the season.

“They came out today and they were ready to battle,” Mustangs coach Brian Hobart said. “We could have played two more quarters. The fact that we had our best (offseason team) attendance ever — November, December, January, February, before the state even said we could play — these kids held onto some hope, they came and they worked, and I couldn’t be prouder of them.”

Whenever a team dominates for as long as Penn Yan has, it is not often they get a chance to do something for the first time. Due to sectional finals being played at the higher seed instead of the usual neutral site, the Mustangs won a Section V championship on their home turf for the first time ever.

For the seniors, that achievement was not lost on them.

“It’s huge,” Penn Yan senior Ayden Mowry said. “After this crazy year with COVID, it’s big. We’ve been working really hard to prepare for this. Everybody comes hard to work everyday, and it’s great energy to be surrounded by.”

The Mustang seniors left everything they had on their own field in their final game. Of the 16 goals, Penn Yan seniors accounted for 13 of them. Brodmann, selected the Class D MVP, led the scoring with five goals and one assist. Mowry registered four goals, Devon Gerhardt produced a hat trick, and Mekhi Mahan’s lone goal came in the fourth quarter.

With an altered contract in the works and a bit more control of his future, Aaron Rodgers set to report to training camp

Packers by position: As JK Scott and Hunter Bradley must re-prove themselves, they should take a cue from Mason Crosby on special teams

It was evident right from the jump that Penn Yan (16-1) was operating in top gear. They killed a Pal-Mac man-up opportunity almost immediately and scored the game’s first goal with 8:04 showing on the first-quarter clock. Less than three minutes later, Penn Yan senior longpole Mason Kuver stripped a Red Raider of the ball, scooped it up and sprinted past midfield. Kuver then found Gerhardt, who fired in his first goal of the game.

Pal-Mac (13-5) dominated on face-offs, winning 21 of 22 draws thanks to Quinn Nolan; Nolan won the ensuing face-off, sprinted down the middle of the Mustang defense and scored, making it a 2-1 game.

Penn Yan scored the next six goals before Pal-Mac got their final goal past Griffin Emerson, who had a stellar day in net. Emerson ended with eight saves. Every time Pal-Mac had an opportunity to end Penn Yan’s scoring streak and momentum, they were met by Emerson, who made saves every which way a goalie can. More often than not, Emerson’s save would transition into a goal for Penn Yan.

The Red Raiders are a young, talented team that knocked off the No. 2 seed, Marcus Whitman, in the semifinals.

“I think we came out pretty good today,” Pal-Mac head coach Joe Hill said. “Their goalie had a great game.

“They’re tough. They have a lot of seniors. You can tell that loss to Canandaigua really bothered them as a program. We got a lot of young kids that will hopefully come back and take this loss to heart. We ran into a buzz saw. They were definitely the better team today.”

Out of a 24-strong roster, the Red Raiders had seven seniors and many underclassman who missed an entire year of development. There were moments Pal-Mac’s talent and coaching showed, but there was no denying Penn Yan on this day.

“They wanted to do something special, and I really believe they did,” Hobart said.

As for the program losing eight seniors, a quick scan of the home crowd confirms that the program is in good hands for years to come — maybe decades.

“I looked around and I saw all the little guys here with their orange shirts on,” Hobart said. “I remember seeing (the players) when they were little kids. Hopefully, we can keep it rolling.”

Based on the number of younger kids playing wall ball outside the locker room after the win, the dominance that is Penn Yan lacrosse is not likely to wane anytime soon.