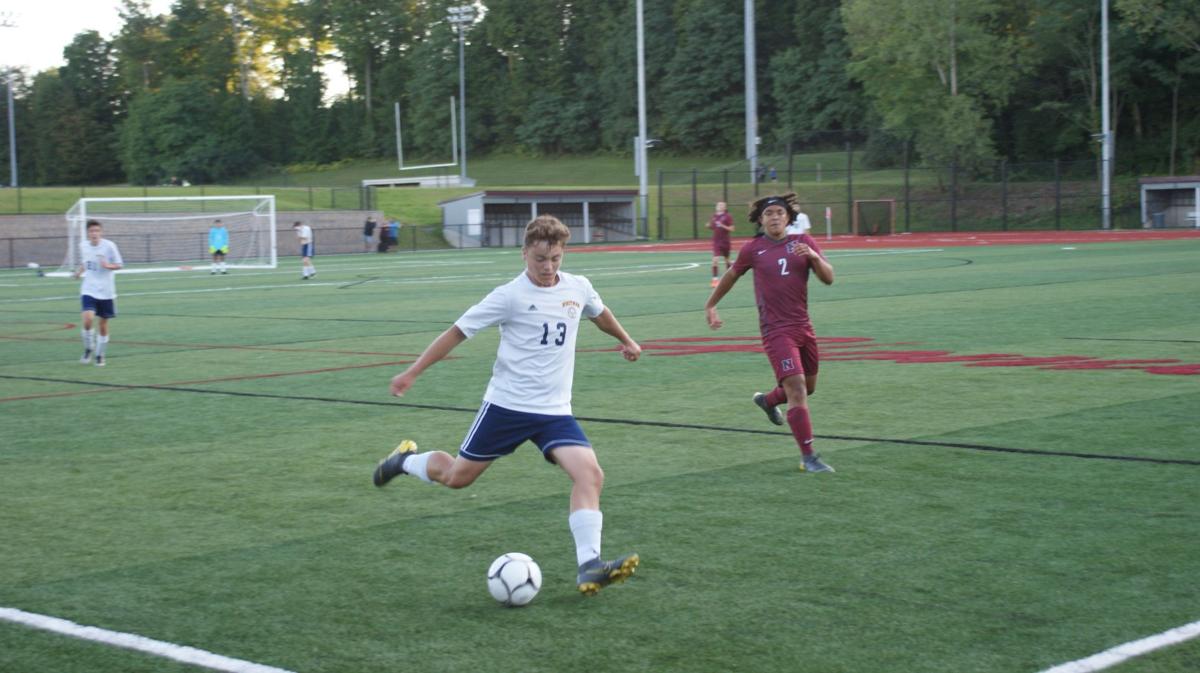 Marcus Whitman midfielder prepares to cross the ball into the box in attempt at leveling the score in the first half against Newark. 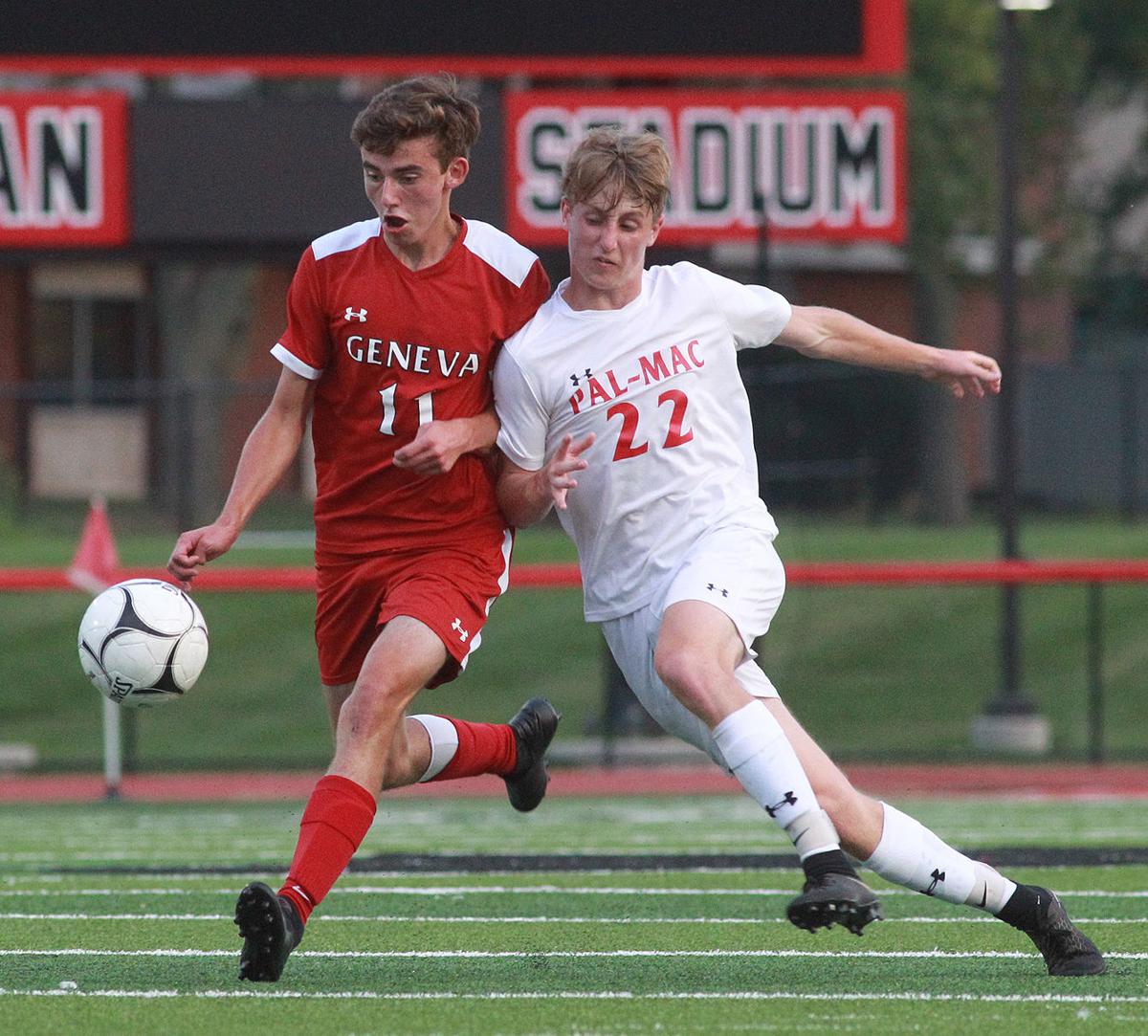 Geneva and Pal-Mac players battle for the ball during a September 2019 matchup.

Marcus Whitman midfielder prepares to cross the ball into the box in attempt at leveling the score in the first half against Newark.

Geneva and Pal-Mac players battle for the ball during a September 2019 matchup.

The 2020 boys soccer season will be one of the more interesting seasons in recent memory. You can thank the pandemic and late start to the season as two of the biggest reasons.

While that quintet is well equipped to challenge for league championships again, the added rules and protocols put into place for the upcoming season will produce new layers of obstacles to overcome.

Some of those requirements:

• Players will have to wear face coverings at all times during games and practices.

• There will be a face covering/water break following the first dead ball after the 20-minute mark.

• Goalies will not be allowed to spit in their gloves, but can use a water bottle.

• Speaking of water bottles, every person involved with the game will have to use their own water bottle.

• There will not be any handshakes before or after contests.

• There will be no regional or state championships for fall sports in 2020.

It has not yet been determined if Section V will hold sectional tournaments in any fall sport — which will put a greater emphasis on league titles than any time in recent memory.

Here is a brief look at how the area leagues set up:

FINGER LAKES EAST“We’re nervous but excited,” Pal-Mac head coach Chris Mahnke said. “We’re going to keep everybody as safe as possible following the protocols that were put in place. Hopefully, we have some fun.”

Pal-Mac finished the 2019 season with an overall record of 17-3, including 10-2 in the Finger Lakes East. The Red Raiders captured the Class B1 sectional crown with a win over league rival Geneva.

With restrictions on road trips, Packers look to beat hotel boredom — and it starts with … cornhole?

Bears vs. Falcons preview: 5 things to watch during the Week 3 matchup

“There’s a couple of key things that we won’t be doing,” Mahnke said. “Usually, we start with a big dinner at my house. And, I’m definitely going to have to change the practice schedule to try and keep as much distance as possible for as long as possible.”

“There’s a little bit of confidence because we were two-time Section V champs in (Class B),” Mahnke said. “Knowing that, we’ve got our work cut out for us. We’re going to be a marked team. There’s a little nervousness there.”

Geneva took a big step forward under head coach Jeff Dunham last year, and the Panthers are poised to challenge for a league title in 2020. They return several talented players from a squad that went 13-5 overall, including 7-5 in league play.

FINGER LAKES WESTMarcus Whitman had a down year in 2019, ending the season with an overall record of 5-10-2, including 2-3-1 in league play.

However, as Wildcats coach Matt Palmer noted, the wins-and-losses prospects for 2020 are outweighed by the ability to play.

“Excited that it’s happening,” Palmer said about the upcoming season. “We can’t change what’s going on, so I’m excited to see people working hard to make this work for us.”

Nothing will change in Palmer’s coaching styles besides following the new guidelines and protocols going into the season.

“We have been kind of the middle of the road in the league,” Palmer said. “I think this is the year we have some seniors with the mindset that this is time for Whitman to make a push and hopefully make some noise with some of the schools that have been up there for a while. We have a number of players that were a part of our basketball sectional run last year. Their mindset is just above and beyond that we have had in years past as far as what it takes to achieve that next level mentally.”

Bloomfield and Honeoye followed co-champs Naples and HAC in the 2019 standings.

WAYNE COUNTYWhile Marion and Sodus proved formidable at times last season, East Rochester won the league without losing a game. The Bombers followed by turning back three league opponents — Gananda, Sodus and Williamson — to win the Class C1 sectional crown. Their bid for the state tournament ended in a 1-0 overtime loss to Caledonia-Mumford in the play-in game.

Had Marion (13-5 overall and 8-4 in league play in 2019) not fallen to Keshequa in the Class C2 sectional finals, East Rochester would have encountered a fourth straight league opponent in the postseason.