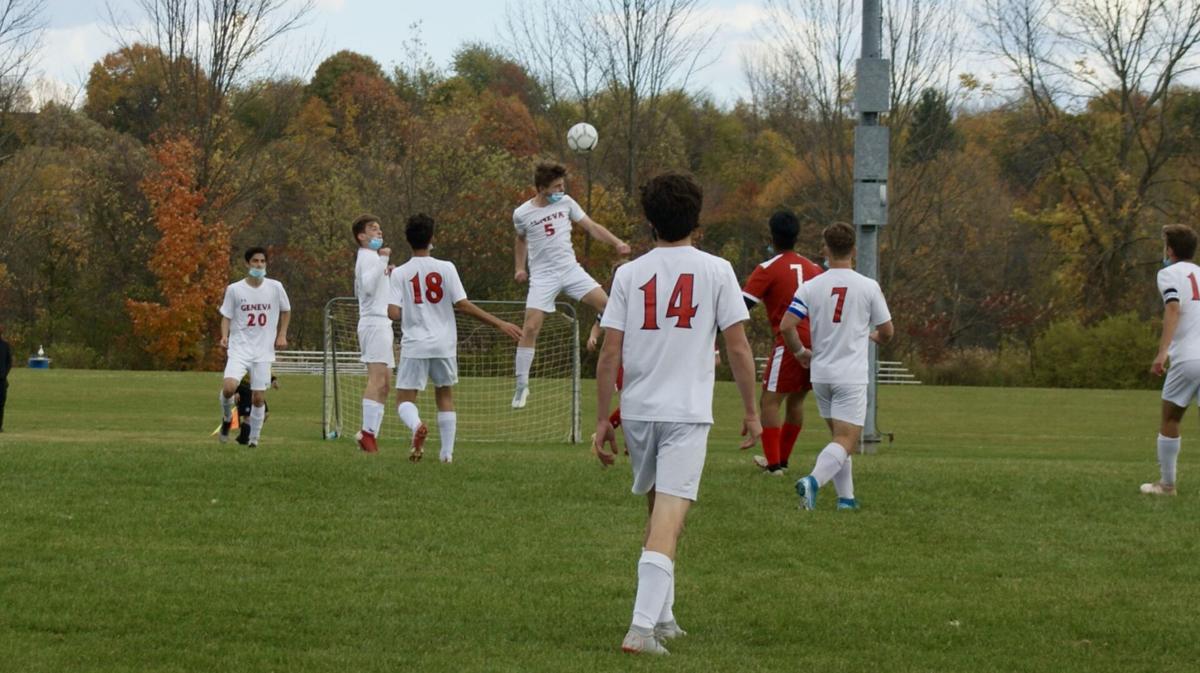 Geneva midfielder Nate Rusinko (5) explodes off the ground to head the ball away from goal in the second half. 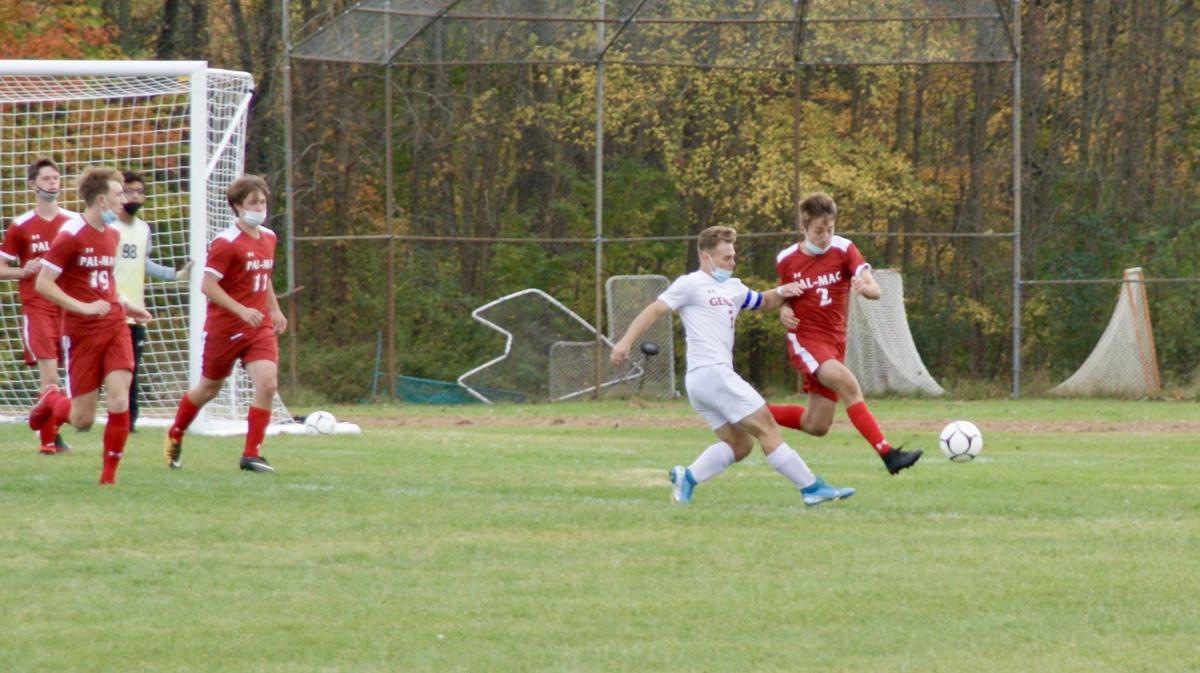 Geneva midfielder Nate Rusinko (5) explodes off the ground to head the ball away from goal in the second half.

PALMYRA — The soccer gods shined down upon Palmyra-Macedon’s campus on Saturday as the matchup between Geneva and Pal-Mac boys soccer provided a stunning Finger Lakes fall day.

It took a clinical touch from Geneva’s Mason Rusinko in the final minutes of the game to lift the Panthers over the Red Raiders with a final score of 2-1.

“We played a good first 20 and a good last 20,” Geneva head coach Jeff Dunham stated after the win. “We haven’t played a complete 80 (minutes) yet, which is certainly something we have to build on, but I liked how they composed themselves.”

Pal-Mac came out of the gate with energy and pushed deep into Geneva’s half early in the game but with few chances at goal. On multiple occasions, Geneva goalkeeper Kenny Myer punted the ball well over the halfway mark, kickstarting the Panther’s offense..

“Kenny is dangerous,” Dunham said of his goalkeeper. “He can definitely crush it and that brings a whole new element to the game.”

Once Geneva began to establish possession in the Red Raider’s end, they seemed to chip away at Pal-Mac’s back line.

After the mask/water break, Geneva had a throw in from Pal-Mac’s end. The ball found the foot of forward Jordan Myer, who took a shot towards goal from about 35 yards out. The ball deflected off a Pal-Mac defender’s head and went straight for the net. Pal-Mac’s goalkeeper dove to his right and managed to get fingertips on the ball. The ball then bounced high off the crossbar and came down to a waiting Mason Rusinko, who casually headed the ball into the net for the game’s first goal and Geneva’s first tally in three games.

“Sometimes all you need as that 1 and the kid’s momentum starts spinning,” Dunham said. “It’s definitely great to see that get in there.”

Pal-Mac responded with energy and worked their way into Geneva’s end. They managed to control possession for the remainder of the half, but only managed a shot from senior captain Jay Huddleston that sailed a few feet over the net.

At halftime, possession was about even between the two teams, but Geneva seemed to generate more chances at goal.

Patriots focus on offensive adjustments with 49ers up next

The young Red Raiders adjusted and came out flying. They immediately backed Geneva into their own end cleaned up their passing, dribbling and overall possession.

“I think that in the first half we spent a lot of time not playing our soccer,” Pal-Mac head coach Chris Mahnke said after the game. “The trouble with graduating 12 seniors and nine starters is that the linking in and the shape we try to take is hard to recreate with a young group. I’ve got the athletes, I’ve got the speed, I’ve got the passion, but right now we need a boatload more experience playing with each other.”

The Red Raiders kept pushing their way towards the Panther’s goal with methodical passing and dangerous centering crosses. Seven minutes had elapsed in the second half before Pal-Mac was awarded a penalty kick on a call that would have drawn complaints from the crowd no matter which way it was called.

Senior captain John Huddleston took the PK and confidently shot it to the right side of the night the for the tying goal. Huddleston and fellow classmate and captain Jace Schafer controlled much of the play for Pal-Mac and led the young team.

“They are our hub,” Coach Manhke said of Huddleston and Schafer. “Then you add Brendon Moquin, who’s a very important piece of our puzzle right now; I rely on them so much because they are my returning starters. They’re full of passion and we’re all starting to gel.”

Following the tying goal, Geneva continued to defend on their toes as Pal-Mac kept attacking, but all the Panthers needed was a few seconds to take control of the game.

Panther goalkeeper Kenny Myer gobbled up a ball and launched a kick that sent the ball well past midfield and to the left side. Aiden Eighmey took control and with a Red Raider defender on him, Eighmey cut back and crossed a low, fast ball towards the goal. As he had been all game, Rusinko was in the perfect spot and stuck out a foot with a diving effort to tuck the ball into the goal with 2:16 left on the clock.

“Mason is dangerous and he can finish and every team needs a finisher,” Coach Dunham said of his senior captain. “His touch at the end there was beautiful to put it in. Great ball fed to him by Aiden Eighmey but he finished it beautifully.”

With his second goal of the game, Rusinko upped his career point total to 114.

A 2-1 lead gave Geneva all the energy they needed to hunker down on defense, withstand a final Pal-Mac attack and win their third game of the year and break the two-game losing streak.