Kicking off the 200 medley relay was Geneva/Waterloo senior Dominic Fratto. Fratto’s split time of 25.30 helped Geneva/Waterloo win the event with a final time of 1:50.45. 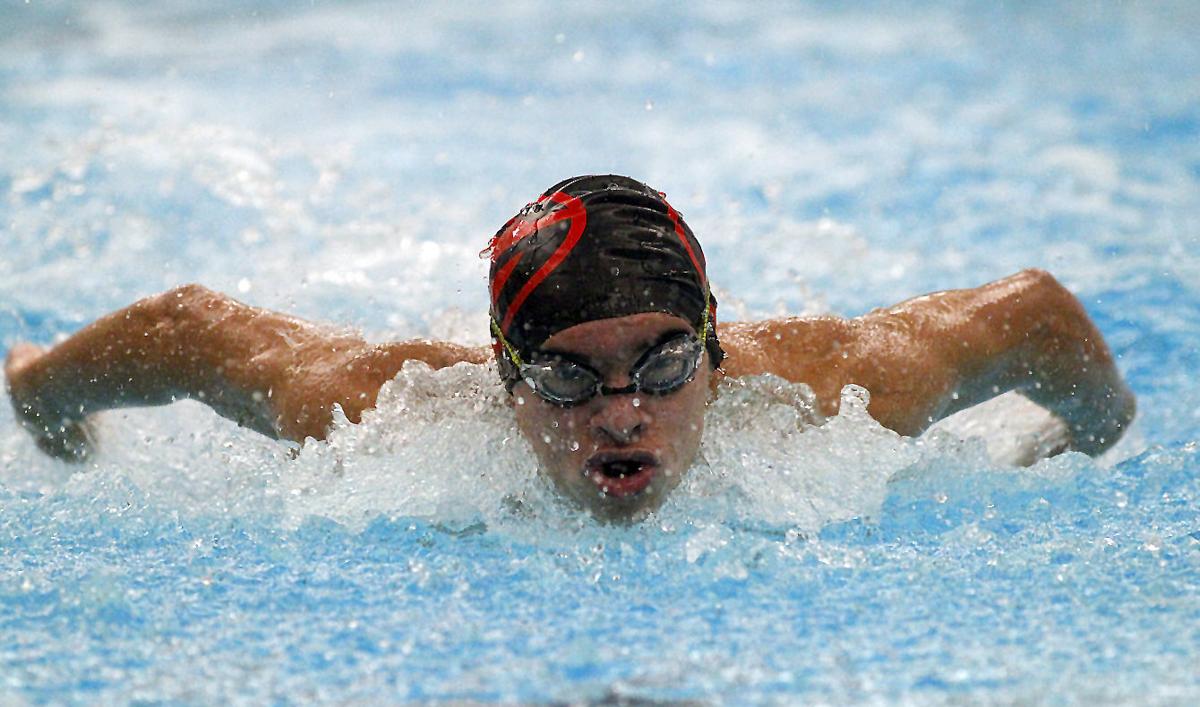 Geneva/Waterloo swimmer Christopher Woody pops out of the water for a breath in between stroke in the 200 Individual Medley. Woody would go on to win the event with a final time of 2:19.26, over 14 seconds ahead of second place. 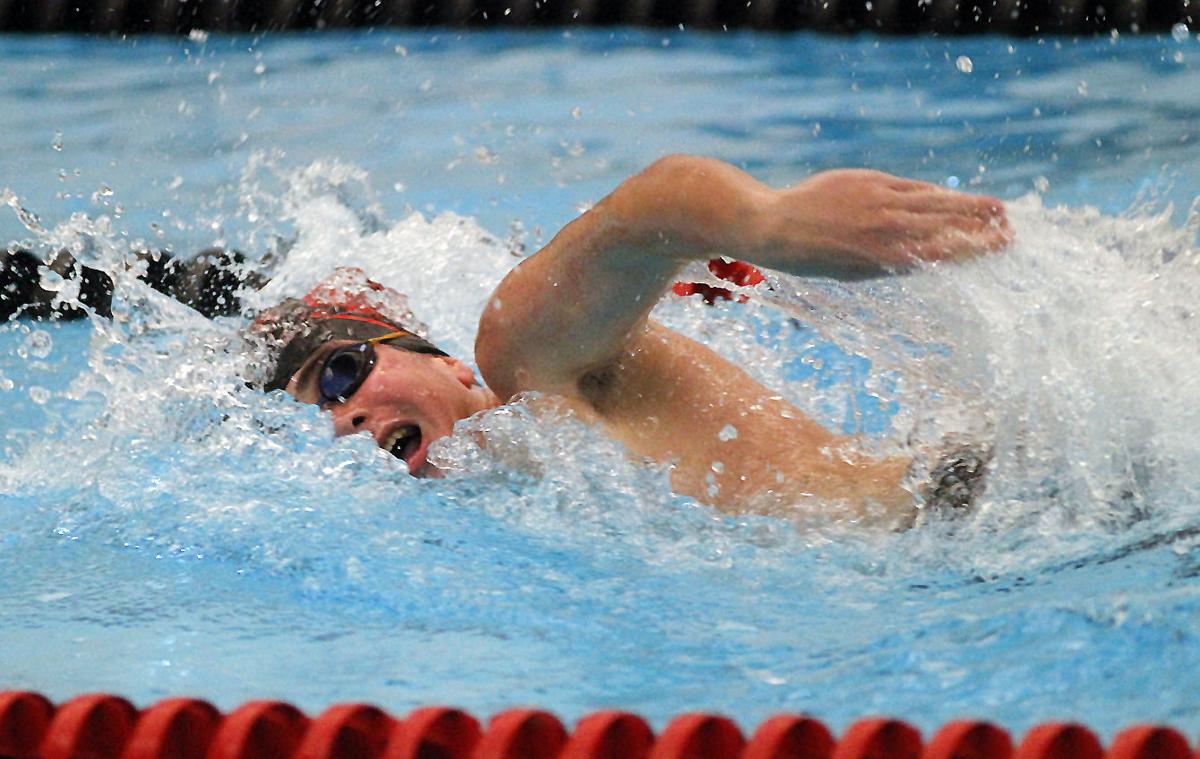 In the 200 medley relay, Geneva/Waterloo swimmer Gerard Humiston was the anchor for the Panthers, swimming the final freestyle.

Kicking off the 200 medley relay was Geneva/Waterloo senior Dominic Fratto. Fratto’s split time of 25.30 helped Geneva/Waterloo win the event with a final time of 1:50.45.

Geneva/Waterloo swimmer Christopher Woody pops out of the water for a breath in between stroke in the 200 Individual Medley. Woody would go on to win the event with a final time of 2:19.26, over 14 seconds ahead of second place.

In the 200 medley relay, Geneva/Waterloo swimmer Gerard Humiston was the anchor for the Panthers, swimming the final freestyle.

GENEVA — What started out as a crucial Finger Lakes Division I match-up turned into a recording-breaking night for the lone Waterloo representative on the Geneva/Waterloo team.

There were no spectators to take in a historic meet as Waterloo senior Dominic Fratto broke his own records in the 50 freestyle and 100 backstroke on Tuesday evening as Geneva/Waterloo dominated a strong Newark team by a final meet score of 117-58.

Fratto re-set his pool record for the 50 freestyle and then broke both the pool and the school record in the 100 backstroke.

“It feels great,” Fratto stated after the meet. “I honestly went into the meet and I didn’t think that I was going to break the record, then I did. I came in trying to get a low :22, I got the low :22 and broke the record.”

The 50 freestyle was divided into two separate heats as Fratto crushed the competition, winning with a final time of 22.06 seconds, 3.01 seconds faster Newark’s Tyler Vermeulen. Winning by over three seconds in the shortest event of the meet speaks volumes to Fratto’s spectacular talent.

“He swam hard,” Geneva/Waterloo head coach Trish Brewer stated of Fratto after the meet. “He put it all in the pool. He’s getting stronger as the season goes. He’s being a really good leader in and out of the pool.”

Traditionally, the 50 free is the fourth event of every meet and the 100 backstroke is the 10th. Fratto had to wait just six more events before he swam for another record in the 100 backstroke. Fratto touched the wall with a final time of 55.10 seconds. No other swimmer swam under one minute. The next fastest swimmer was Newark’s Jace Fredericksen, who was 10.5 seconds behind Fratto.

In addition to his solo feats, Fratto also started and finished the meet with relay wins in the 200-yard medley and the 400-yard freestyle.

Fratto quickly got the lead in the 200-yard freestyle before handing it off to sophomore Christopher Woody followed by junior Troy Snook and freshman Gerard Humiston. The foursome took first place with a final time of 1:50.45.

In the 400-yard freestyle relay, senior Christian Eveland, eighth-grade phenom Sophie Augustine and Humiston gave the anchor Fratto a lead for the final 100 yards to bring home the final victory of the night with a final time of 3:54.06.

“To become an All-American, that’s my goal,” Fratto stated on his expectations for the remainder of the season. “That’s a really hard goal to do so I started to pick-up another practice, I’m (with) USA swim team now so I can get better and reach my potential.”

Snook would shine in the diving for the meet as he was the only one to participate finishing with a score of 141.50.

Geneva/Waterloo doesn’t just have Sophie Augustine leading the way in the eighth grade slot, they also have Marissa Ryan, who qualified for sectionals in the 100-yard butterfly as she finished in fourth place with a time 1:15.49.

“We expect to continue and compete hard and put our best effort forward,” Brewer said on her team going forward this season.

Newark’s lone win of the night came in the 200-yard freestyle relay with Reds senior Kylar Vermeulen, junior Chip Murphy, Joey Camblin and freshman Luciano Rank finished with a final time of 1:43.21 edging out a Geneva-Waterloo’s team of Woody, Eveland, Snook and senior Abraham Porschet by less than a second.

“I thought we swam pretty well,” Newark head coach Jeffery Garrett stated about his team after the meet. “We had a couple of guys who had some really good swims especially in the 200 free relay. We had a great last leg by Luciano Rank. It’s the middle of the season, we’re trying to get ready for sectionals, getting some good swims in.”

Newark will be back in the pool on Thursday at 4:30 p.m. at Midlakes High School against Clyde-Savannah/Mynderse.

“Let’s make it through the end of the season,” Garrett laughed on his teams expectations going forward this season. “I’m looking forward to having some great swims.”