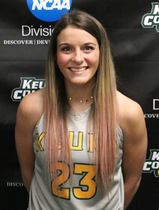 It was one of the stronger offensive performances for Keuka this year as they shot over 50 percent from the field and 46.4 percent from three-point range.

Four different players for the Wolves registered 10 or more points, two of which came off the bench. Starting forward Elijah Smalls led with a team-high 17 points to go with four rebounds. Starting guard James Barnes had a solid game with 11 points, eight rebounds, four assists and three steals.

WASHINGTON D.C. — The Keuka women’s basketball team dropped a close game against Gallaudet following the men’s victory against the Bisons.

The Wolves (5-5, 1-2) had a 23-point second quarter but were held to 10 points in the first quarter and just 12 in the third. Pal-Mac alum Riley Record continued to lead the team in scoring as she had a team-high 20 points with three rebounds, two assists and two steals.

Keuka had a difficult time containing the Bisons (4-7, 2-1) as they shot 50 percent from the field and were sent to the line for 23 attempts.

The Wolves will wrap up their three-game road trip on Wednesday at SUNY Cobleskill.