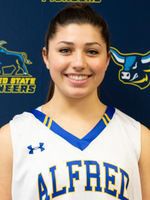 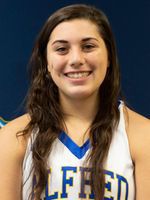 Nothing compares to a strong sibling bond. Just ask Kelsey and Skylar Shaulis.

The two sisters are separated by a year in birth, but have shared a strong bond through the sport of basketball. As former South Seneca teammates, they experienced plenty of success, highlighted by a New York state Class C championship. Today, they still share a close bond on the court as members of the Alfred State College basketball team.

“Not many people can say that they have played (and won) with a sibling,” Skylar, a freshman, said. “It was normal to us play on the same team because we have played together for the majority of our basketball careers. It would be strange not to play with her. I couldn’t imagine having gone to a different school and playing against her.

“I think our bond now in college allows us to criticize each other more and push each other to make us better. We both have different things to offer and know how to play with each other.”

“We have always played together since we were little, so we don’t really know what it’s like to not play with each other,” Kelsey, a sophomore, remarked. “Last year, while she was a senior (in high school) and I was in my first year of college, it was definitely weird not playing with her. We had always had each other to practice with and make each other better, so it was a little bit of an adjustment. But, at the same time, I was able to grow as a player and help her make the switch from high school ball to college ball.”

“We see each other almost everyday,” Skylar added. “Basketball is always something we are talking about, over dinner or after practice. We always reflect on the games and talk about what we can do better individually and as a team.”

Losing on the court is something the two haven’t experienced in a while, but they’ve stuck together through the drought.

“Our first quarter is always the roughest for us,” Kelsey added. “Then we try and play catch-up. We need more people to be consistent and have a faster start to the game. We have also struggled with shooting as a team. We haven’t quite gotten to the point where our offense flows, but I think it will next semester.”

For the week of Nov. 26, Kelsey was named Alfred State’s Female Athlete of the Week. She led the Pioneers with 24 points during that stretch, posting a team-high 15 points vs. Houghton and adding an additional 9 against Hilbert. Kelsey also dished out 4 assists, hauled down 3 rebounds, and nabbed 3 steals.

“I honestly had no idea I was going to get that title for the week,” she said. “It was the first time I was named athlete of the week, so I was excited to see my play in college get recognition. I only want to improve more and more each day to hopefully receive more accolades in the future. Right now, I’m just focusing on what the team needs, though.”

“Being her sister is really cool because people know me because of her,” Skylar said. “A lot of times people call me ‘Kelsey’s sister.’ She has established herself here, so that kind of made it easier for me to fit in, but that also poses a challenge for me to live up to the standards and expectations she has set.”

Alfred State will return to action Jan. 2 when it travels to Pitt-Bradford.

Kelsey is a diagnostic medical sonography major. Skylar plans to major in nursing.

Matt Meckley’s “College Playbook” highlights local high school graduates playing at local colleges and universities, along with those competing outside our coverage area. Email ideas to mmeckley@fltimes.com, or call him at (315) 789-3333, ext. 245.