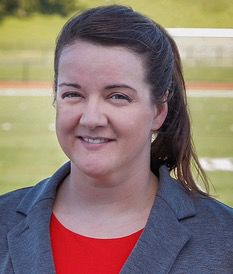 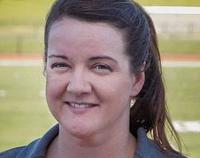 GENEVA — Days before Hobart football opens up its 2019 season, head coach Kevin DeWall has hired a new coach to his staff.

Cait Finn will join DeWall’s staff as a defensive assistant coach for the 2019 season.

Finn will be the first woman to coach Hobart football in program’s 126-year history.

Being a defensive assistant will be just one of the hats Finn will wear with Hobart and William Smith. She already works full time as the assistant director of the Centennial Center for Leadership, where she oversees campus-wide leadership programming as well as a multitude of other duties.

Finn has an extensive background in both football and athletics.

While attending Nazareth College, Finn played junior varsity soccer and ran track & field while earning her bachelor’s degree in social work in 2007. Before her time at Nazareth, Finn was the first woman to play football for Warwick Schools. She played in the backfield as a running back as well as safety in seventh and eighth grade.

Corey Linsley grapples with finality of playoff loss, uncertain future as Packers clean out their lockers

'We still Billieve': Fans turn out at airport to welcome home Bills

After graduating from Nazareth, Finn went on to develop a passion for weightlifting and became a certified strength and conditioning specialist and holds national level coaching certification from USA Weightlifting.

Before coming to HWS, Finn spent time at Ithaca College where she spent time with the athletic department serving as graduate strength and conditioning coach the football, track & field, cross country and gymnastics teams.

While at Ithaca, Finn earned a master’s degree in exercise and sports sciences from Ithaca College in 2016.

Following her time with the Bombers, Finn worked as a strength & conditioning intern with Villanova football and Olympic Sports at Notre Dame. She then moved on to be the strength and conditioning coach for the rowing and fencing teams at Princeton.

Finn continued to be trail blaze her way through collegiate athletics.

After her time at Princeton, Finn went to Rosemont College, where she was hired as the head strength and conditioning coach, assistant athletic director for student-athlete performance and even served as the interim athletic director.