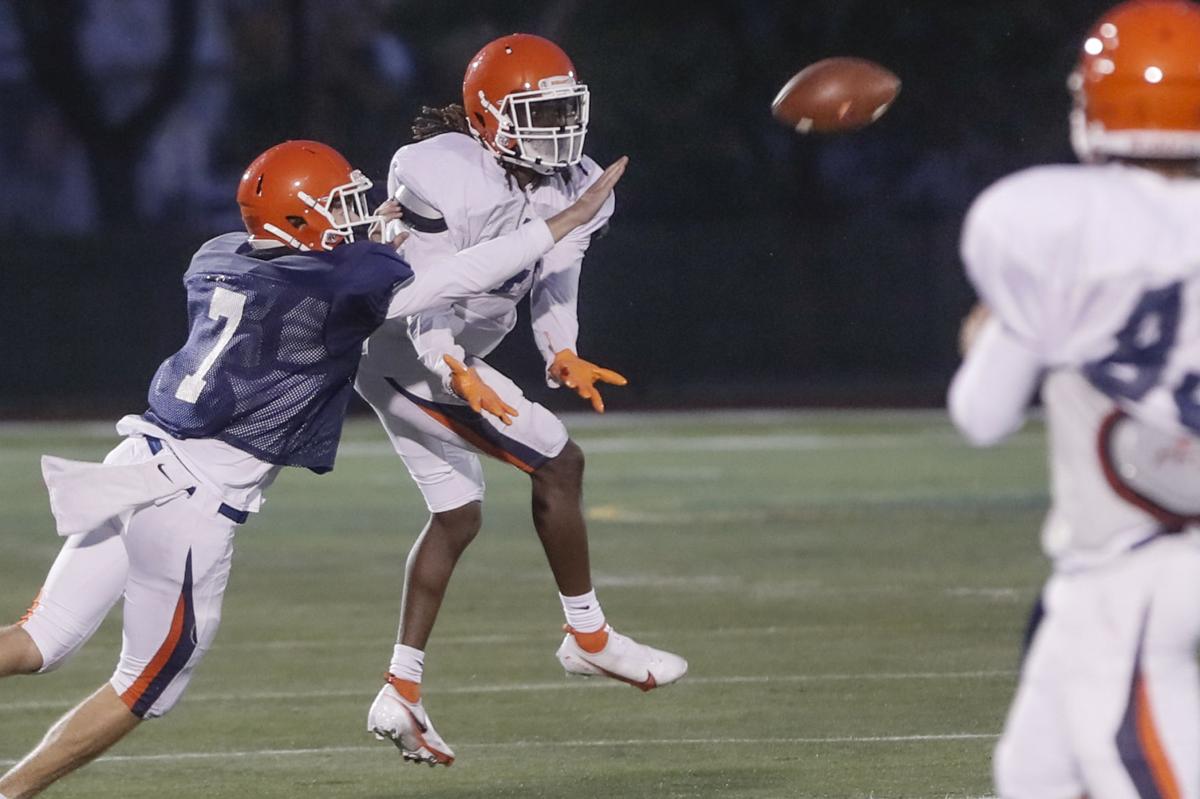 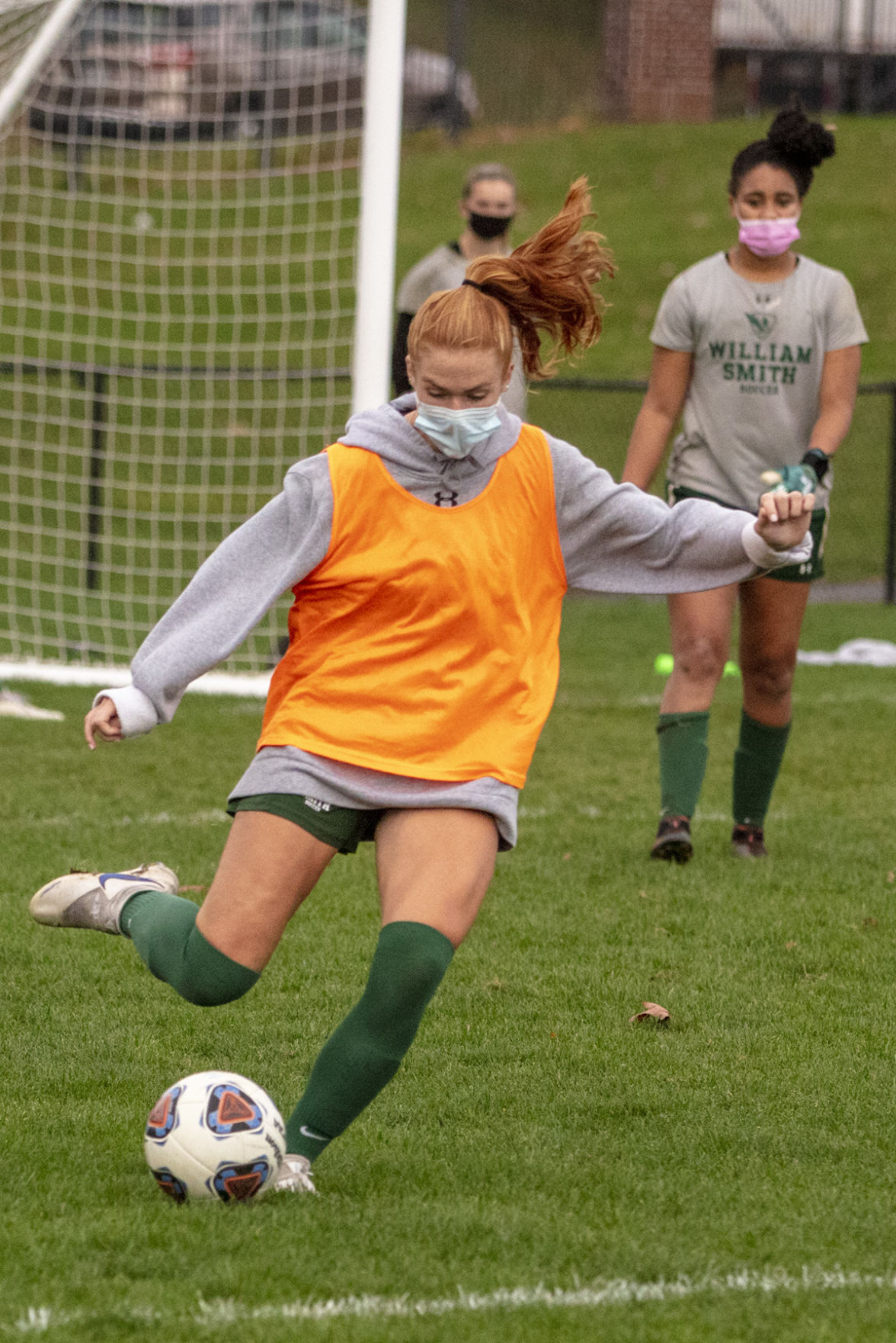 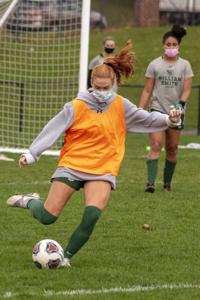 Senior Merilyn Hinrichs plays the ball with freshman goalie Kirsten Nelson looking on in the background.

Senior Merilyn Hinrichs plays the ball with freshman goalie Kirsten Nelson looking on in the background.

GENEVA — The local college sports scene has been a vacuum ever since William Smith lacrosse beat Dickinson 6-5 on March 8.

When the pandemic first struck, the campus of Hobart and William Smith shut down much like the rest of the world. Students went home, sports teams called it a season and closed — and locked — facility doors.

There has been little change this fall. No Liberty League titles for Hobart soccer, no NCAA Final Four trips for William Smith and no Saturday home thrashings for Hobart football. It has been a season of lost opportunity, canceled swan songs and scrubbed revenge tours.

Cozzens Field has been as busy as ever, Boswell Field’s turf has been trampled with cleats and teams have bonded in ways like no season before.

No other collegiate team has set foot on campus and yet HWS athletics has experienced a successful season.

“Our kids are pretty resilient,” Hobart soccer head coach Shawn Griffin stated in a phone call with the Times. “They’ve acclimated as well as one can be. I think it’s the first time since 1953 we’ve not had a fall soccer season at Hobart”

“We as coaches and players have adapted and adjusted and have made the best of our time,” Hobart football head coach Kevin DeWall stated.

At the beginning of the season, players battled for their own morale and it proved to be a struggle. Seniors faced leaving a legacy behind without a stat sheet and first years struggled to navigate the world of being a collegiate student-athlete while adhering to safety protocols.

“We’ve been really dialed in to not letting the kids feel sorry for themselves,” Griffin stated. “We’re really training for next year and trying to be as productive as possible every day. We’re going six days a week, so that just tells you something about our kids. It’s what they do: they play.”

The coaches and players understand the restrictions as well as the cancellation of the season, but it did not make things any easier.

“When that decision was made, it was very hard for everyone involved: the players, the coaches,” Coach DeWall said. “We knew the reasons behind it — all very good and justified reasons — but it doesn’t make it any easier in terms of handling the emotions.”

“We can’t all be in the team room at a time,” William Smith soccer head coach Aliceann Wilber said. “That’s a place that all student collegiate athletes love; they love being in the team room (together). We can’t because of the spacial requirements, so you miss all that camaraderie.

“We’ve had to be pretty inventive to stay within the protocol to be able to get 40 women together at a time in something that approximates a team-building thing. Some of our kids went and helped build the Geneva bike (park), as did a number of other teams.”

Some seniors understandably opted out of their seasons to focus on graduating and their upcoming careers, but the ones who stayed have left an unquestionable mark on the program and the underclassmen and women.

“That’s the best way to say it in my opinion. They have been outstanding. The leadership they’re providing, the work ethic; you have to be a culture keeper, and it’s not if you’ll have a legacy because you will have one, and what do you want it to be? I’m not kidding, our seniors have been training like tomorrow’s the Liberty League championship, and they’ve done it all year.”

For soon-to-be free agent and All-Pro center Corey Linsley, ‘all signs are pointing towards snapping the ball somewhere else next year’

Coach Wilber has seen her seniors leave a similar impact.

“We’ve relied a lot on (the seniors’) leadership and their mentality,” Coach Wilber stated. “They’re providing examples on and off the field for our younger players to follow.”

October arrived and teams finally found a safe way to get together as an entire roster. When that happened, it was only a matter of time before the competitive spirited erupted and intersquad scrimmages took place.

Hobart and William Smith soccer both hosted multiple scrimmages and coach Griffin along with HWS’ sports information department managed to stream the event.

“We’ve been pretty creative. Last weekend we had our inter squad scrimmage that was on Cozzens Field and we had uniforms and radio and play-by-play; (it was) a 3-2 game and very very competitive.”

Hobart football had a bigger hill to climb from the start due to the physical nature of the sport and the size of the roster, about 75.

“It took us a while,” coach DeWall stated about getting the entire roster together. “Obviously the largest sport on campus. It effected our group more than most just because of the nature of the size of our roster.”

Yet still, the Statesmen found a way to carry on and eventually got together as a whole team.

“We have about 75 guys, and the groups were all pods of 10,” DeWall began. “So we had eight different pods for the back end of September and it really wasn’t until October that we were able to work our way to having all the guys on the field together. As challenging as that was, it was great. Finally we were able to have the whole team together.”

What has been consistent across all sports has been the opportunity to hone in on program culture and playing styles — a sort-of “free pass” to use an entire season to alter cornerstones and emphasize culture.

“Certainly there’s been more time to dive into some things; we’re learning a new system for example,” Coach Wilber stated. “We’ve really delved into reconstructing our whole leadership format in a way that we never would have had time had we been in season. So there has been, I think, things of benefit for us because we could take our time to sink our teeth into it.”

“We flipped it around and focused on the positives of what we could do,” Coach DeWall said. “For the younger guys, they would normally be scrambling to learn the playbook. Now that we’ve had more time, it’s been easier for the first years. So there’s definitely been some hardships and some negative things to overcome, but we’ve tried to flip it over and really focus on the positives. We believe we are going to use this time better than other (football) programs and be better because of it.”

Reality hit hard on students’ morale early on, but the ability to forge on and turn the season into countless positives has been the most important takeaway of the season and entire year of 2020.

Perhaps that’s too profound. At the end of the day, it’s simply a unique way for sports to do what it always does: bring people together.

Hopefully, the winter teams can find their own positives in a season that just recently ceased to exist.