Above, Alan Dubrovsky winds up to power a forehand return. Below is a screenshot of Pete Lambos chatting with Dubrovsky. They discussed Dubrovsky winning multiple athletic awards as well as his final match as a Statesman. See the entire interview at fltimes.com. 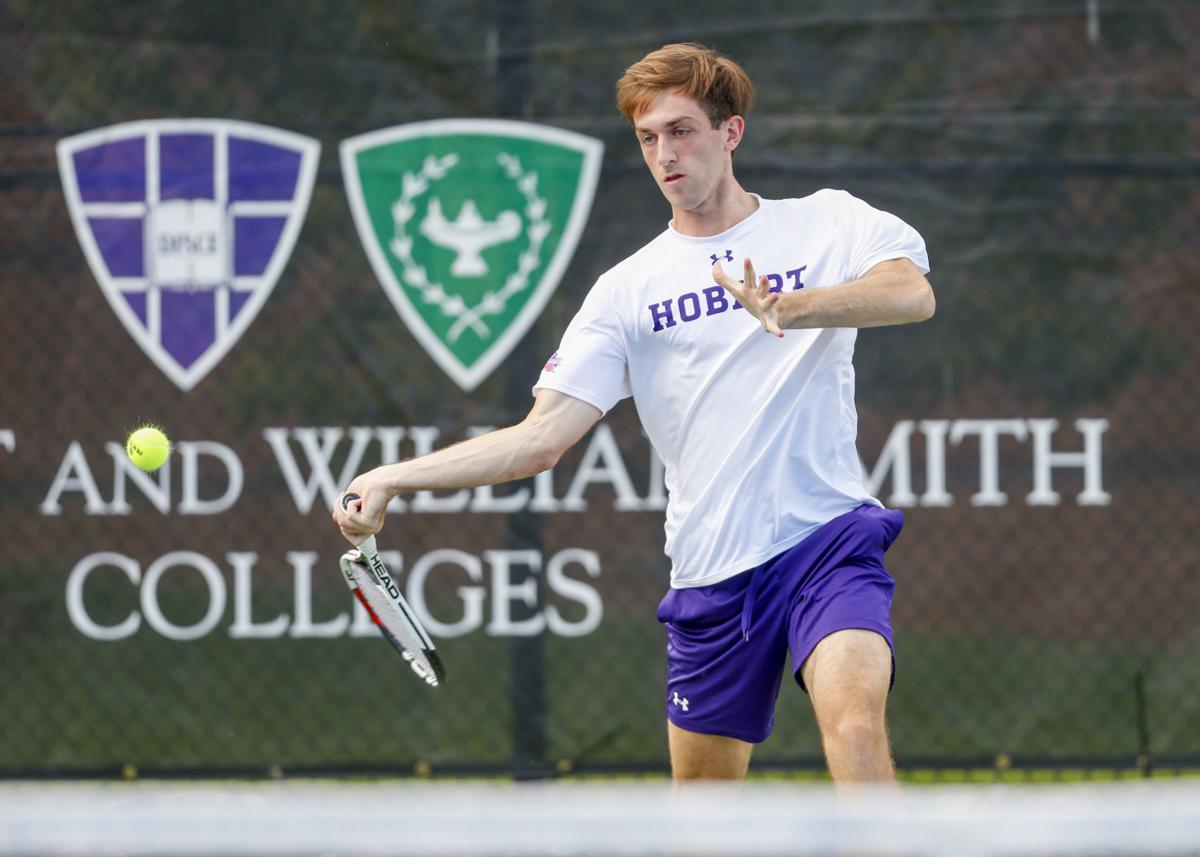 Above, Alan Dubrovsky winds up to power a forehand return. Below is a screenshot of Pete Lambos chatting with Dubrovsky. They discussed Dubrovsky winning multiple athletic awards as well as his final match as a Statesman. See the entire interview at fltimes.com.

GENEVA — Not much solace can be taken from getting the spring sports season ripped away from a senior athlete ready for their swan song. If asked, any athlete would say they rather would have had a few playing opportunities instead of none.

Hobart tennis is one of the handful of college sports that operates in both the fall and spring semesters. A few matches from Hobart senior Alan Dubrovsky was all the Hobart athletic department needed to see in order to name him the 2020 recipient of the Francis L. “Babe” Kraus ‘24 Memorial Athlete of the Year award.

Much like the Winn-Seeley Award for William Smith, the Kraus award is presented to the Hobart senior for sportsmanship, leadership, and scholarship during his undergraduate career.

“Alan came in as a two-star recruit, and we have a good number of those on our team, but what separated him from anyone else is he is consumed with tennis,” Hobart tennis coach Tim Riskie explained. “That was the biggest thing that differentiated him as an athlete; (it) was his ability to only be mentally thinking about the game and visualizing what he wanted.”

When Dubrovsky receives his diploma, he will leave Hobart as one of the best tennis players in program history, and though he didn’t get to play out his final college season, he was able to make history in his final appearance.

In the last match of the season, a 7-2 thumping of Hamilton College, Dubrovsky moved into sole possession of second place on the Statesmen’s all-time list with his 76th career singles win ... in dramatic fashion too. Dubrovsky was two points away from losing and fought back to win. The comeback victory gave him an all-time record of 76-22 in singles to go with a 66-30 mark in doubles play.

Though he would have much rather have played the entire spring season, he is supremely grateful that he was able to end on such a high note, given the circumstances.

“That match kind of summed up my college career in a sense,” Dubrovsky stated. “It was a really close match. It came down to a third set. I was actually down 3-5, 30-love in that game, I believe. I came back and won that match 7-6 in the third (set), so it came right down to the wire.

“I didn’t want to give up, and I kept fighting. Of course, at the time I didn’t know that it was going to be my last match, so winning that match meant a lot after the fact.”

Last season, he broke the single-season record for singles wins at Hobart with 25. He earned ITA Singles and Doubles All-American honors after winning both draws at the 2018 ITA Northeast Regionals. At the 2018 ITA Cup, Dubrovsky placed fourth in singles and eighth in doubles with Walker Anderson.

In addition to being named Hobart’s Athlete of the Year, Dubrovsky also received the 2020 Myron V. Jacobs ‘37 Memorial Award as the tennis team’s MVP.

“Even the Jacobs award as our team’s MVP, we could count on him to win against any team in the country,” Riskie said. “It didn’t always go that way, but going into (any) match we’re thinking, ‘Alan can win for us,’ and everyone on the team felt the same way.”

These days, Dubrovsky is back with his family as they persevere through the pandemic.

“There’s actually one court open in my whole town right now,” Dubrovsky said of his hometown of Westborough, Mass. “It’s been very high demand and tough to get.”

When suggested that he should compete with other players for right to play on the court, Dubrovsky laughed.

“I thought about that,” Dubrovsky said with a smile. “I’m not there yet. Maybe I’ll get desperate.”

After he receives his diploma, whether in the mail or in person, Dubrovsky plans to intern remotely with the Federal Aviation Administration for the summer, along with playing tennis whenever he can.