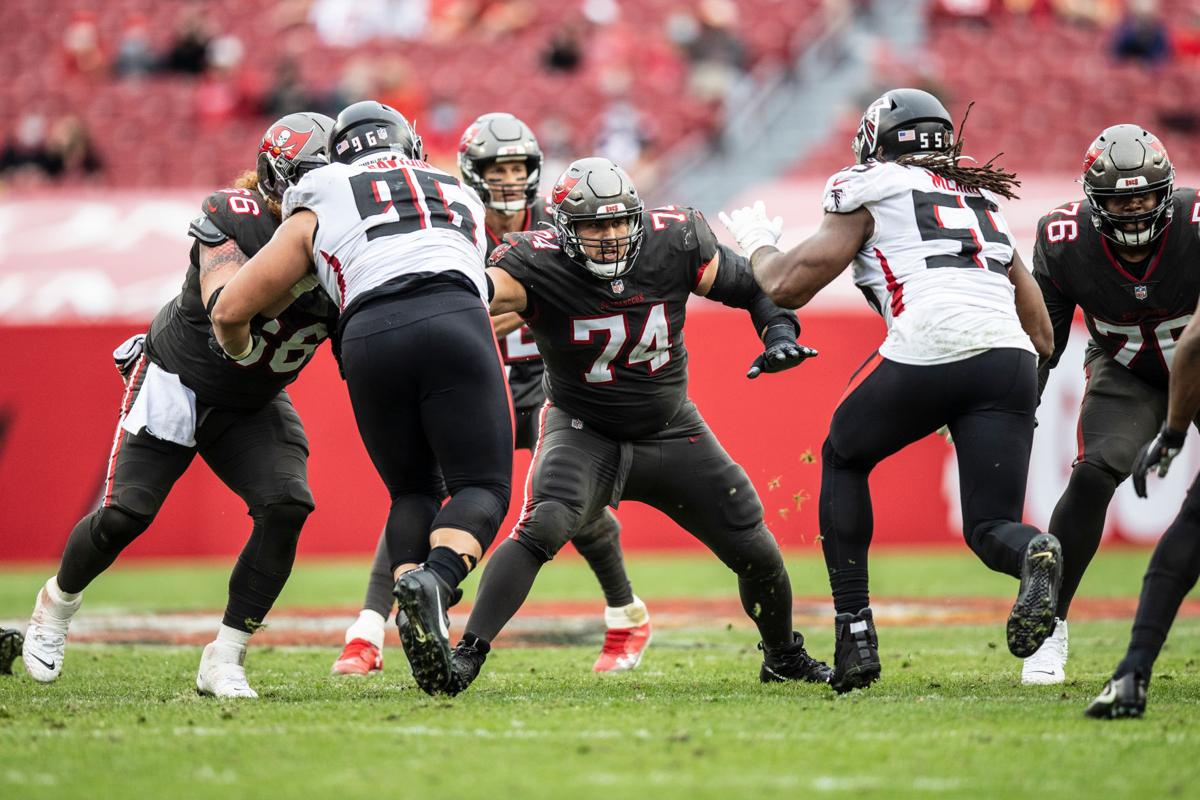 Guard Ali Marpet (74) positions himself to protect quarterback Tom Brady during the Tampa Bay Buccaneers’ 44-27 triumph over the Atlanta Falcons in the Jan. 3 regular-season finale. 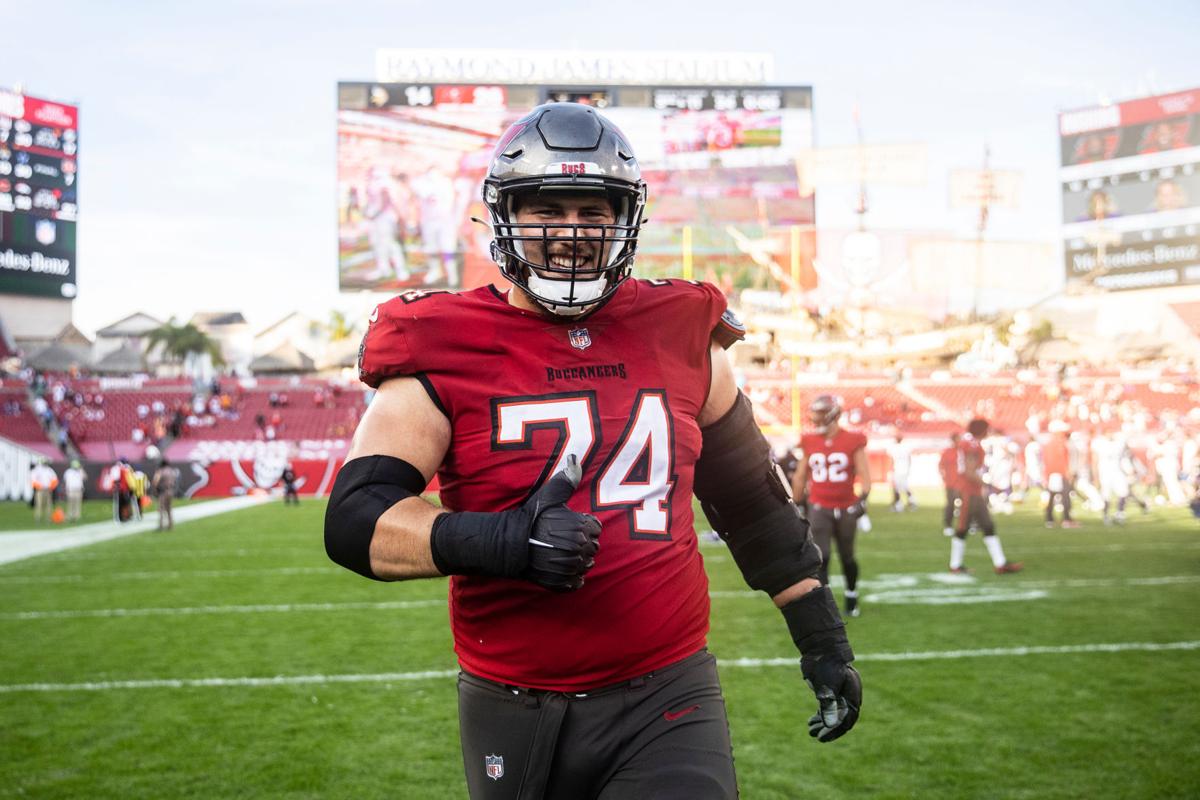 Tampa Bay Buccaneers guard Ali Marpet gives a thumbs up after his team’s 26-14 win over the Minnesota Vikings Dec. 13 at Raymond James Stadium. 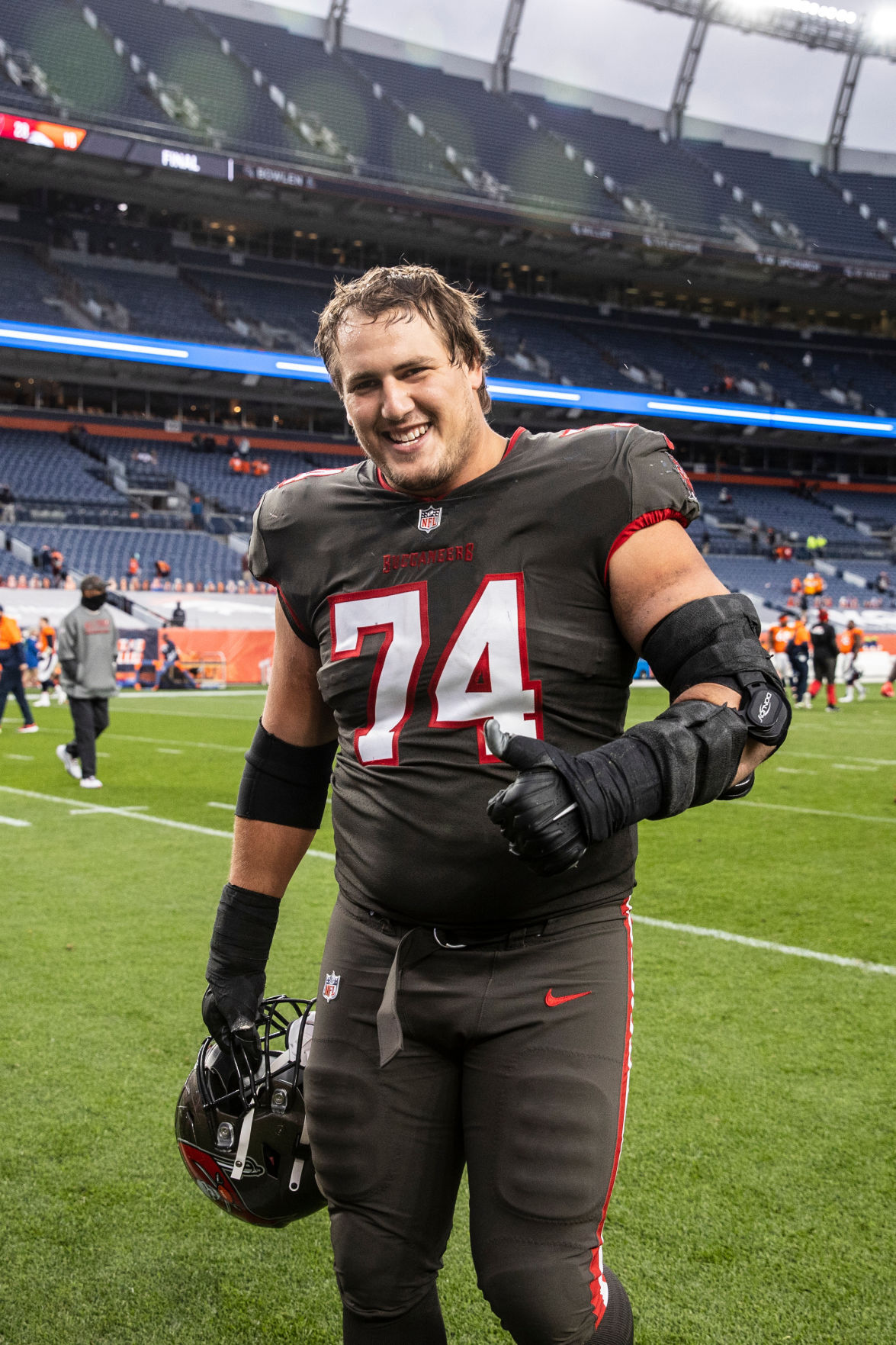 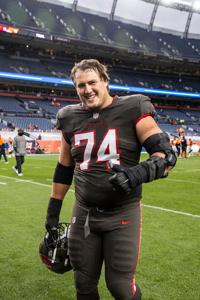 Guard Ali Marpet (74) positions himself to protect quarterback Tom Brady during the Tampa Bay Buccaneers’ 44-27 triumph over the Atlanta Falcons in the Jan. 3 regular-season finale.

Tampa Bay Buccaneers guard Ali Marpet gives a thumbs up after his team’s 26-14 win over the Minnesota Vikings Dec. 13 at Raymond James Stadium.

TAMPA, Fla. — For the initial television appearances and draft stories — even the first few seasons of his NFL career — Ali Marpet was synonymous with Hobart College.

His compelling story made the rounds as a must-know for any commentator or factoid-loving sports fan: The kid from tiny Hobart becomes the highest-drafted Division III player, grows into one of the best left guards in football for the Tampa Bay Buccaneers, and now blocks for perhaps the best quarterback of all-time.

Stories like Marpet’s tell themselves, and he and Hobart will be connected. Always. However, the 300-pound lineman built of brawn, brains and tacos has forced commentators to leave behind the D-III tag and focus on the fact that he is flat-out one of the best linemen in the NFL.

“I think there’s been a lot of times along the way where I’ve been pleasantly surprised with myself,” Marpet said by phone this week as the Buccaneers readied for their divisional playoff game Sunday at New Orleans (6:40 p.m., FOX). “There’s been moments, many moments, that have been nice little surprises for me.”

When Marpet began getting looks from NFL teams, he attended the NFL Draft Combine at Lucas Oil Stadium in Indianapolis. During an interview, he said his goal was to be one of the most athletic linemen at the combine. Being athletic seems to remain the most important tool for him, but he also noted that in today’s fast-paced NFL, it’s to each his own.

“I don’t think you can say it’s one or the other,” Marpet began. “I’d say different linemen have different strengths that make them great. Some of them are able to get away with great athleticism and some of them are great due to their strength and power. For me, it definitely was athleticism. I think that that’s lended itself to my game.”

In year six, Marpet has grown into the centerpiece of a Bucs offensive line that is directed by the man who many call the greatest quarterback of all-time. With Tom Brady’s decades of experience and whopping six Super Bowl rings, the biggest point of emphasis is a simple one.

“The most relevant thing that we discuss is how important communication is,” Marpet said with a hearty chuckle. “I think that that’s been a big part of our game and his game, right? If communication’s great, everybody’s on the same page, and you can figure things out. Things can kind of go awry if you have different expectations than the guy next to you.

For Corey Linsley, ‘all signs are pointing towards snapping the ball somewhere else next year’

Marpet, who was named to the All-Pro team in 2020, and his teammates are looking to avenge two regular-season losses to the Saints. The Buccaneers’ training facility address is One Buccaneer Place, and the feeling on the training grounds has been that of excitement.

“From my sense of what the energy has been like at One Buc is … there’s a little more enthusiasm and energy,” Marpet said. “I think that’s partially due to the fact that 1) we’re playing the Saints, and 2) we’re in the playoffs. It’s the first playoff for a lot of us here, so it’s very exciting.

“I think (with) sudden death (overtime), it becomes all the more exciting. Everything just gets ramped up. Everything that’s enjoyable about a normal Sunday football game just like … becomes so much more. Everything I love about playing football becomes bigger and faster and more exciting.”

The game will be played indoors at the Mercedes-Benz Superdome. The neutral weather seems to sit well with Marpet, who has experienced the extremes of playing in the cold and snow of upstate New York and the heat and humidity of the Gulf Coast.

Weather aside, many Bucs players, Marpet included, are experiencing the postseason for the first time. While Brady has enough experience to stock several teams, already having played and won a postseason game — 31-23 against Washington last week — may make a world of difference for Marpet and the Bucs come Sunday.

The Buccaneers are on a collision course of endless story lines: Future Hall of Fame quarterbacks Brady vs. Drew Brees; NFC South rivalry; two franchises with one Super Bowl each; the perennial contender vs. the rebuilt one. All are scenarios that make for a fan’s dream, and Marpet is literally at the center of it all.

Well, not exactly the center — one spot to the left, to be precise.

Marpet on the field vs. off

According to data provided by Sports Info Solutions, the splits of Tampa Bay’s passing stats are eye-opening when Marpet is off the field compared to when he is on it. Due to a concussion in the middle of the season, he has missed 207 snaps while playing 723. With Marpet on the field, Tampa Bay’s Positive Play rate goes from 52% vs. 42% when he’s off it. With Marpet in the trenches, completion percentage jumps from 60.4% to 67.6%, the touchdown rate goes from 3.7% to 7.4%, the interception rate goes down from 3.7% to 1.3%, and the sack percentage drops from 4.3 to 3.2. All signs of his value to the Tampa Bay offense.