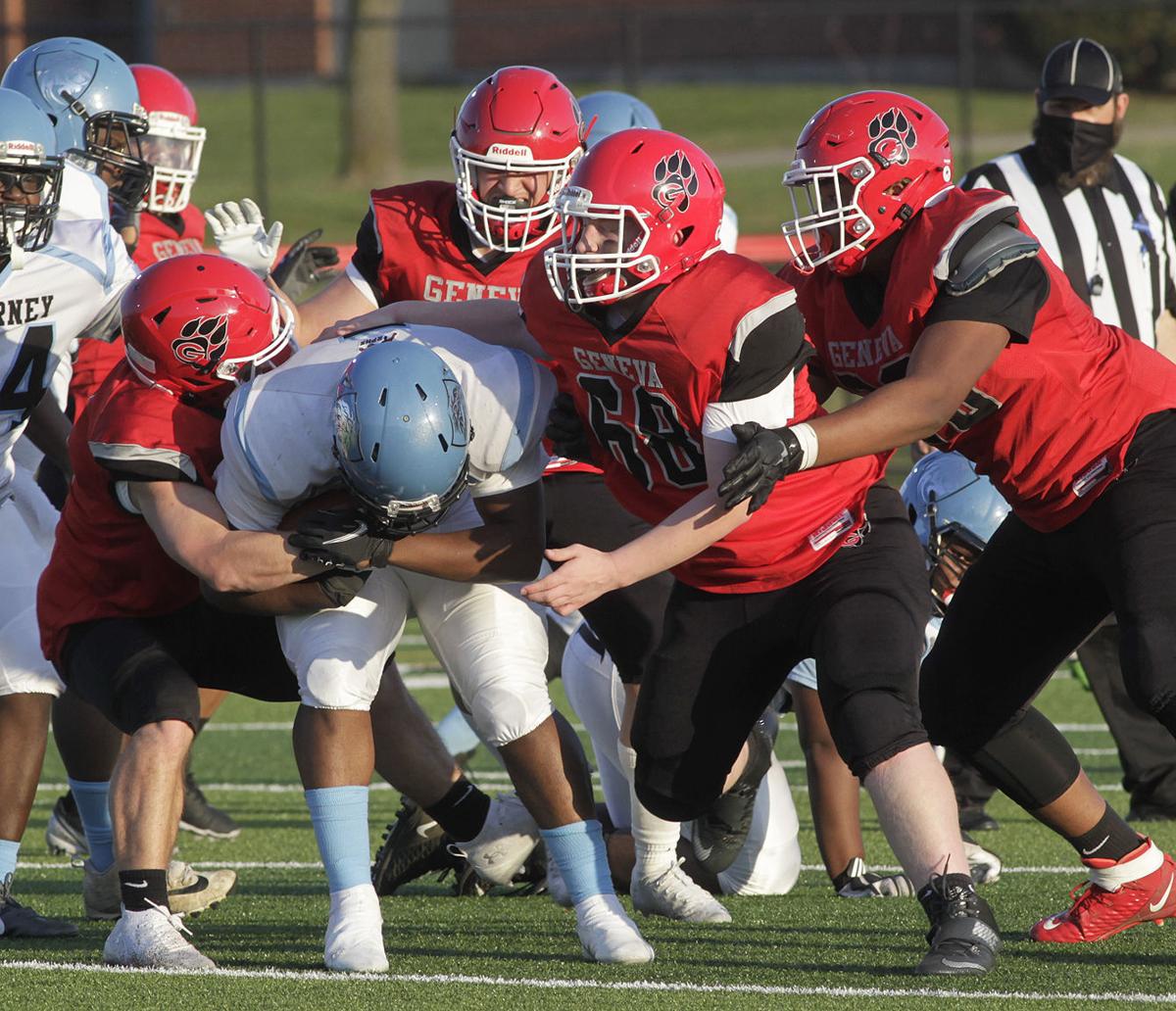 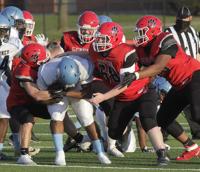 Geneva’s Mason Rusinko (4), Tylers Maples (68) and Luvon Boykins (76) all gang up to tackle the ball holder on the combined team of Bishop Kearney, Rochester Prep and Rochester Academy Charter. 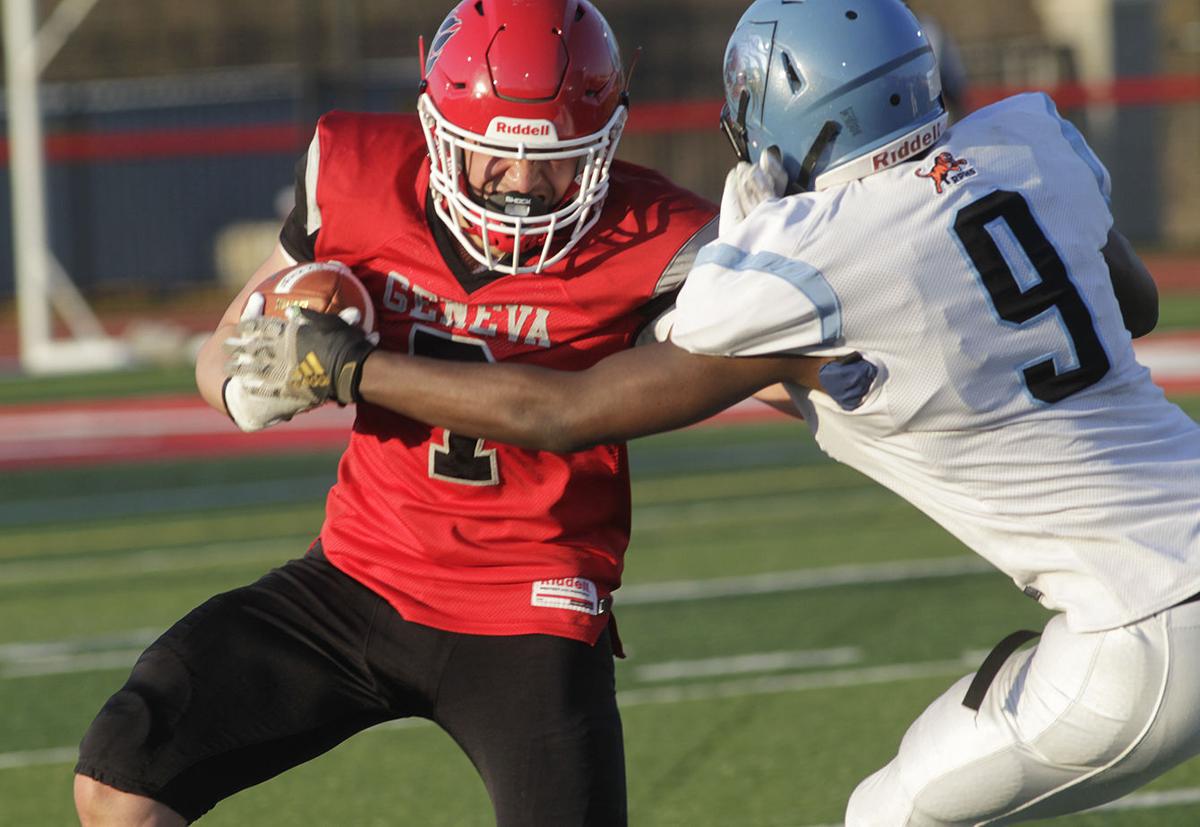 #7 geneva takes off with ball after short kick-off

Geneva’s Mason Rusinko (4), Tylers Maples (68) and Luvon Boykins (76) all gang up to tackle the ball holder on the combined team of Bishop Kearney, Rochester Prep and Rochester Academy Charter.

#7 geneva takes off with ball after short kick-off

GENEVA — A blistering first quarter from Geneva was not enough to overcome a slow and steady comeback from the triple-combined team of Bishop Kearney/Rochester Academy Charter School/Rochester Prep on Thursday night.

The tired legs of Geneva finally caught up with them in the fourth quarter of a three-hour long contest and the Kings tied the game 20-20 with 3:44 to go.

With the offensive line running on fumes, the Panthers went three-and-out on their final possession to give the Kings back the ball with 85 seconds remaining.

The Kings began the drive on the Geneva 48-yard line and chipped away with steady, downhill runs to put them in the red zone with 12 seconds remaining on the clock. Geneva was able to break up a pass attempt on first down but could not keep Kearney quarterback Azavier Ross from finding the end zone with two seconds remaining.

The Kings converted the 2-point attempt and sealed the win on the kickoff with a squib kick. The clock hit zero and the Kings reigned supreme, winning 28-20 after they scored all their points unanswered.

“We started very well but we didn’t adjust well to their blitz game and they were able to stop us in the second half,” Geneva head coach Mike Pane said. “Too many negative plays, fumbles, too many mistakes. We can’t make that many mistakes. We didn’t finish. Tough one, but we try hard, we don’t have a lot of guys, obviously. We’ve worn down in the fourth quarter every single game this year.”

The Panthers chewed up five minutes of clock on the first drive of the game, which was capped off by a four-yard Wildcat pass from running back Nasir Harrison to Tyqwan Coles to put Geneva up early, 6-0.

The Panthers defense then took the field and forced a three-and-out from Kearney in a little over a minute. Geneva got the ball back and running back Nasir Harrison and quarterback Jordan Campbell chewed up the Kearney defense on the ground. Harrison peeled off for a 25-yard run immediately followed by Campbell’s 45-yard touchdown run. The Panthers were able to convert for two points and go up 14-0.

The following sequence was much of the same: Kearney went three-and-out in a little over a minute and Geneva opened up a huge play for a touchdown. This time, it came from the arm of Campbell to receiver Tyqwan Coles for a 66-yard touchdown catch, putting Geneva up 20-0 with 2:00 to go in the first quarter.

As it turned out, that would be Geneva’s final score of the game.

Kearney used all three quarters to slowly wear down and chip away at both the Geneva players and the scoreboard.

At halftime, it was 20-6. At the end of the third, it was 20-12, and by the end of the game, the Panthers had nothing left in the tank to stop Kearney from running it into the end zone twice in the fourth quarter.

“Try to take some positives,” Pane said. “It’s been a tough year for them, for a lot of reasons. We got to stay positive and go from there.”