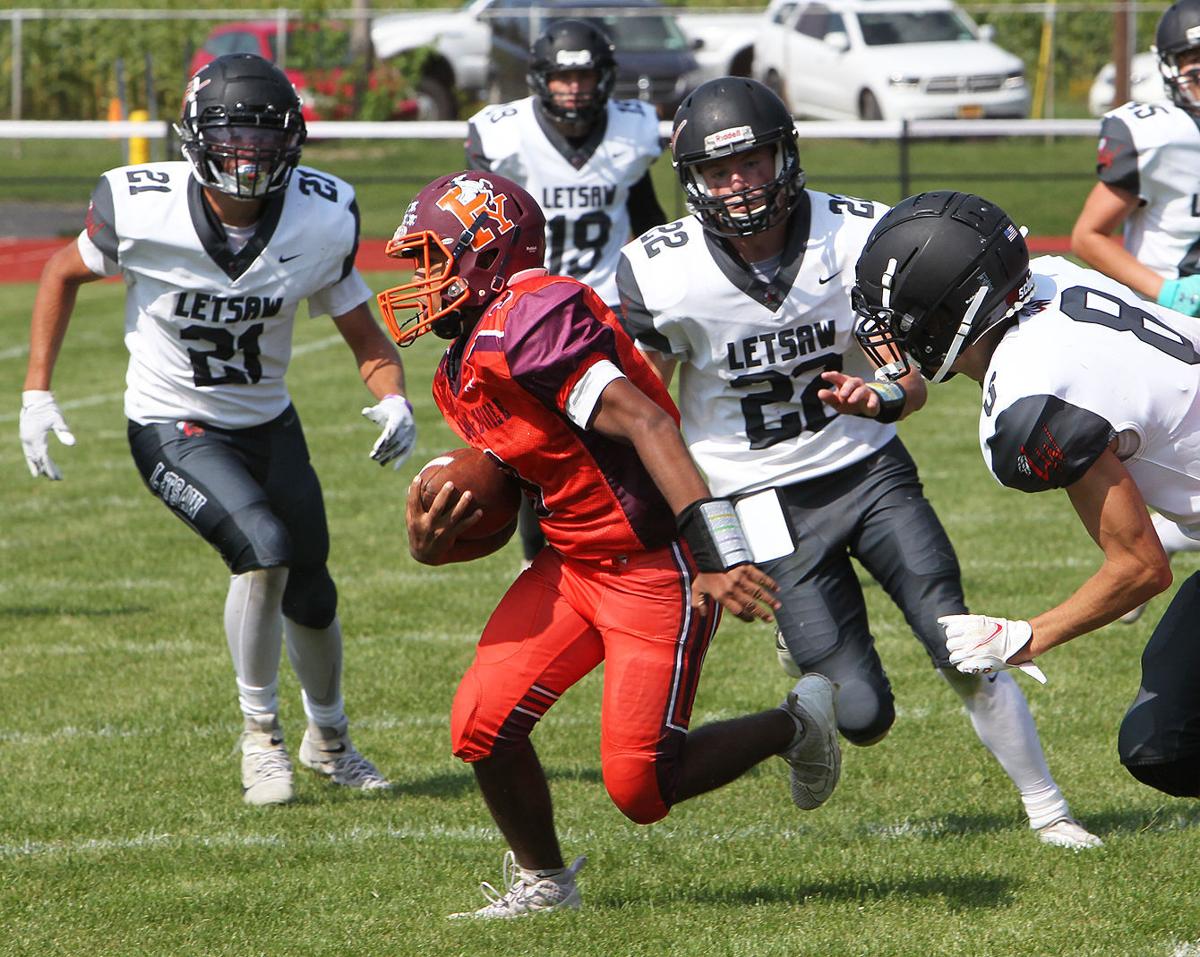 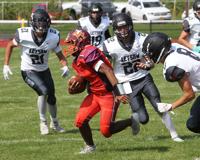 Penn Yan/Dundee junior wide receiver Ashtian Dunning (3) makes the catch and runs his way into the end zone for the go-ahead and game-winning touchdown. 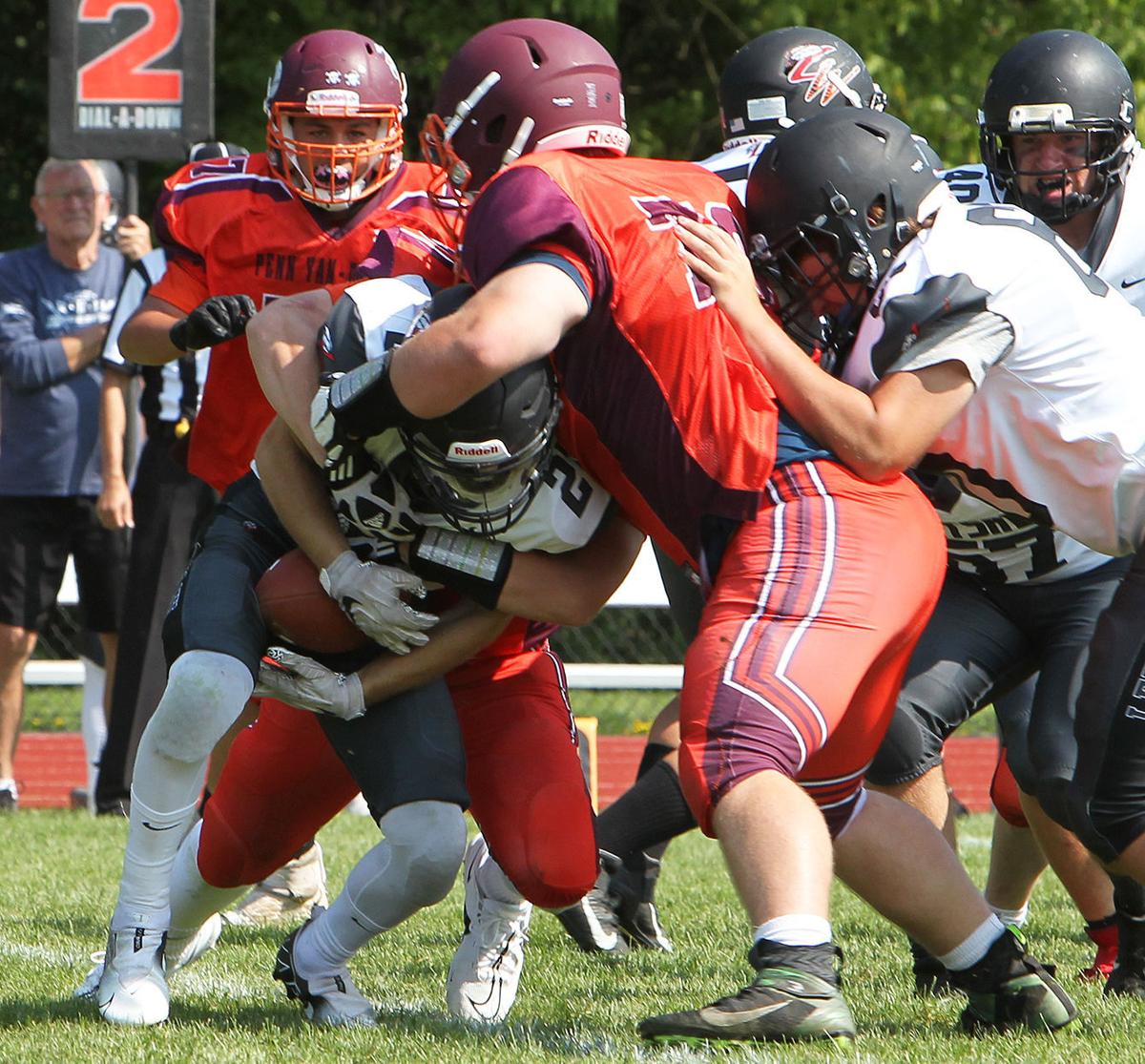 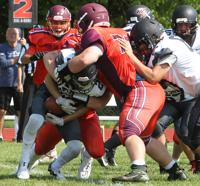 Penn Yan/Dundee junior wide receiver Ashtian Dunning (3) makes the catch and runs his way into the end zone for the go-ahead and game-winning touchdown.

DUNDEE — It had been two years since Dundee had played at Scotsmen Field and Saturday, the Scottmen returned to their home turf with teammates from Penn Yan in tow.

A combined team of Letchworth/Warsaw/Perry traveled to take on Penn Yan/Dundee for an early Class C matchup.

Penn Yan/Dundee (1-1) picked up its first win of the season, 20-14 thanks to a final quarter touchdown by the home team.

“It tells us that we are competitive,” Penn Yan/Dundee head coach Tim McBride said after the comeback win. “We fight ‘til the end no matter what the situation is and we work hard.”

It was not the start Penn Yan/Dundee hoped for as their first two drives of the game led to a interception and a fumble recovered by Letchworth/Warsaw/Perry.

No harm, no foul as the home team held tough and kept the game scoreless after the first quarter of play.

Letchworth/Warsaw/Perry scored the first points of the game after they ran in a touchdown for the 6-0 lead with 8:19 to go in the half.

Penn Yan/Dundee junior quarterback Carter Earl answered right back with a pass to junior wide receiver Ashtian Dunning to set up a 1st-and-goal.

Earl then ran right up the middle of the field for a rushing touchdown to knot the game up a 6-all with 5:10 to go in the second quarter.

Just before halftime, a muffed punt by Penn Yan/Dundee led to another touchdown and a 14-6 deficit.

With Za’Darius Smith out, Packers need Rashan Gary to step up

With Za’Darius Smith shut down, Packers look to Preston Smith, Rashan Gary to step up

7 Saints assistants unavailable vs. Panthers due to COVID-19 protocol

As the second quarter horn sounded, Earl thought he made terrific pass to junior wide receiver Anthony Druker in the right half of the end zone but the referees ruled that Druker stepped out of bounds before the catch, thus negating the touchdown and keeping the game at 14-6 at the halftime break.

When 3:44 remained in the third quarter, Penn Yan/Dundee had a 3rd-and-goal from about the 1-yard line.

Junior running back Nick Slavick received the handoff and ran towards the left sideline to rush in the touchdown to cut the deficit to 14-12.

Penn Yan/Dundee’s first drive of the fourth quarter started on its opponent’s 39-yard line after a defensive pin. With 8:39 remaining in the game, Earl connected with Dunning near the right sideline as he made some incredible moves to run in the end zone for the game-winning touchdown.

Letchworth/Warsaw/Perry had a 4th-and-long with four minutes to play in the game on the Penn Yan/Dundee side of the field, but Slavick delivered a big sack to give the ball back to his offense.

Letchworth/Warsaw/Perry did end up getting a final possession, but the Penn Yan/Dundee team stepped up again to keep their opponents scoreless in the second half.

After a close loss to Marcus Whitman/Bloomfield in Week 1, Penn Yan/Dundee showed its heart and guts in the early-season comeback victory.